From the Bay Area to Boston, Seattle to the Florida Keys, Houston to Chicago, the Class of 2012 hits the theaters.

Before we get to scenes from the MIT Class of 2012 Movie Night, I’ll share a few of my thoughts and observations after having seen 21 this weekend (now the #1 movie in the country):

Okay, on to movie night… 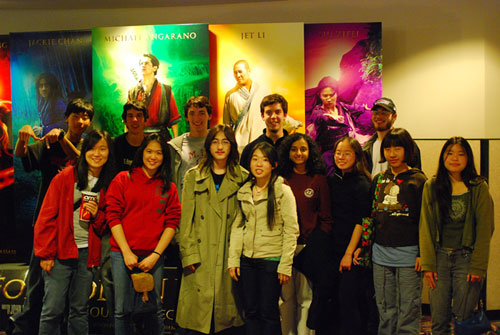 Rachel ’12 writes, “Sorry, a few non-prefrosh sneaked into the picture. Hopefully we have enough real ones to make up for it. The Bay Area is pretty conducive to finding MIT people =)

“It might be noteworthy that 10 people in our group are FIRST Roboticsers, and I think 5 are/have been team captains (including the guy taking the picture, but he goes to Harvard). Coincidence?

“The movie was pretty fun, although a lot of scenes went like this:
21: [math joke/commentary about MIT students not having lives]
Us: [collective groan]

“Also, during the abrupt, exposition-free sex scene:
‘Oh my god, where did the plot just go?’
‘I lost it!'” 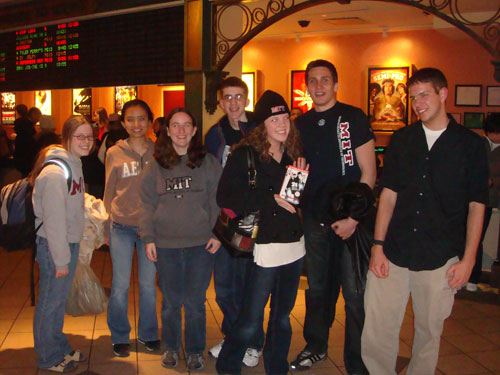 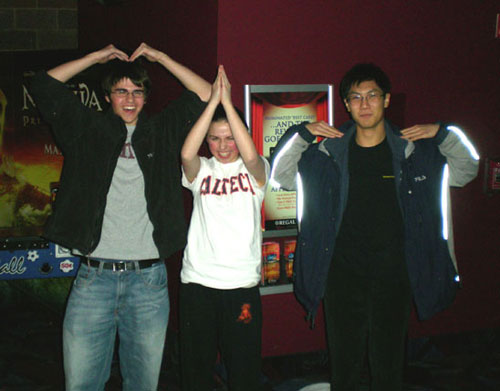 Says Calvin, “We attempt to spell MIT with three people, but as you can see, it didn’t go very well. I guess our human positioning skills were a bit lacking.

“We had a great time, and I loved the opening panoramic shot of Boston along Harvard Bridge. I tried to spot some of the Smoots, but I think I ended up missing them.” 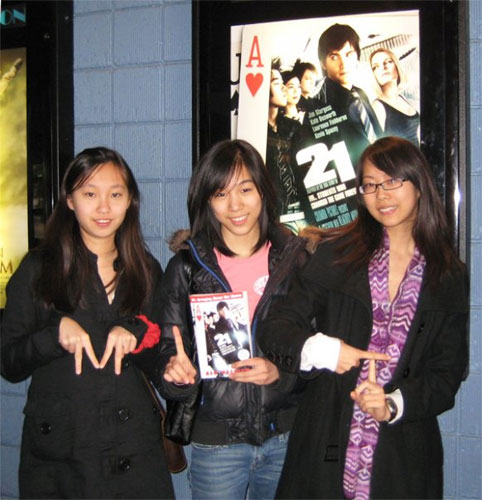 Emily writes, “At the movies. We didn’t have our MIT gear, but we spelled out MIT with our fingers and brought the book.” 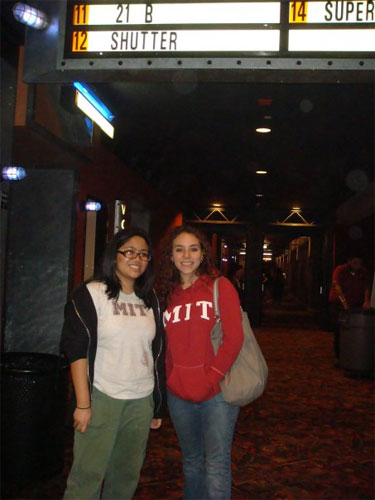 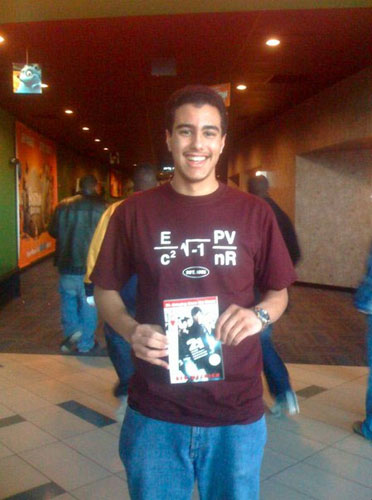 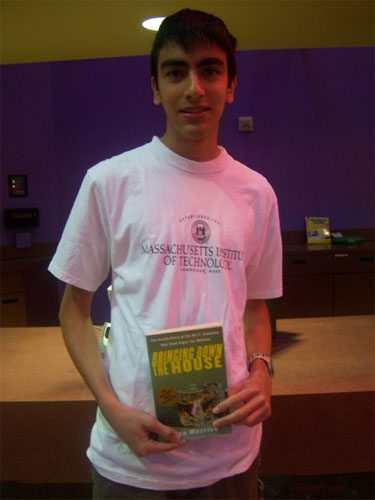 Ahmed writes, “I thought the movie was alright. The cheesy and cliche dialogue kind of killed it.” 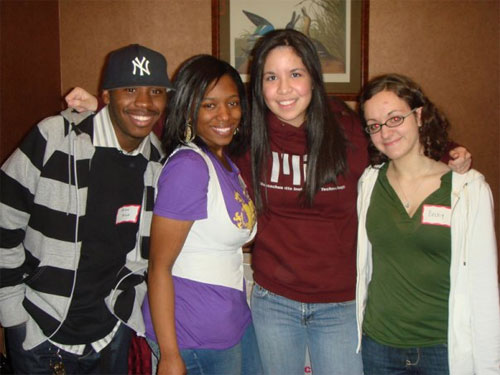 Becky writes, “Lol, we forgot to take our picture when we were at the theatre, and the nearest bookstore didn’t have the book. Oh, well.” 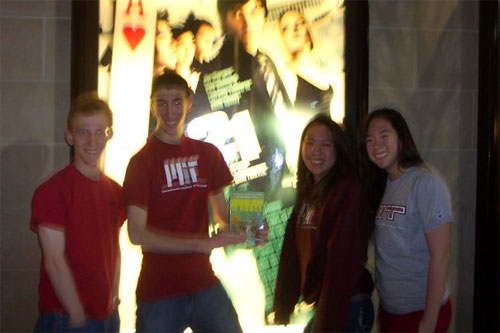 Kayla ’12 of San Antonio (above) says of this photo, “ah i think you guys get the most bonus points! despite the one guy not wearing MIT gear. unless i can’t read that? haha whatev, props. :)” 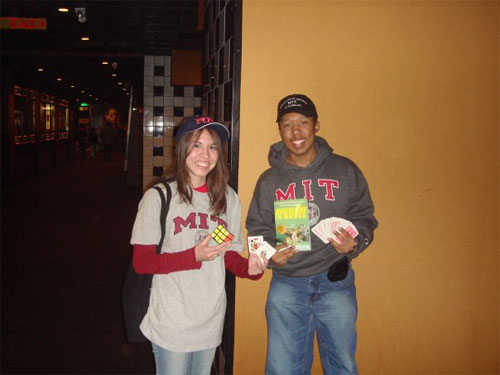 Not only did they see the movie, Marcel also wowed everyone with a card trick: 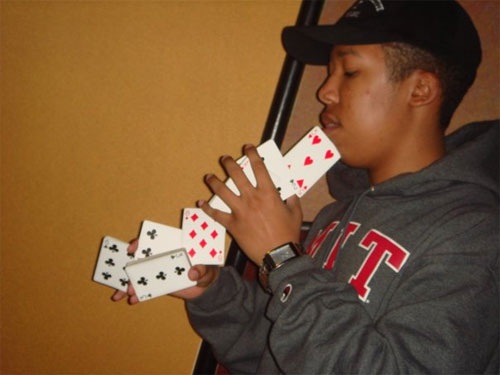 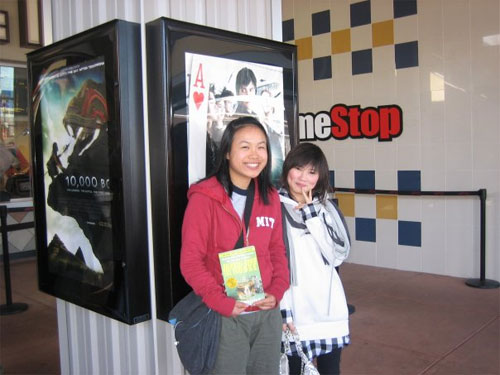 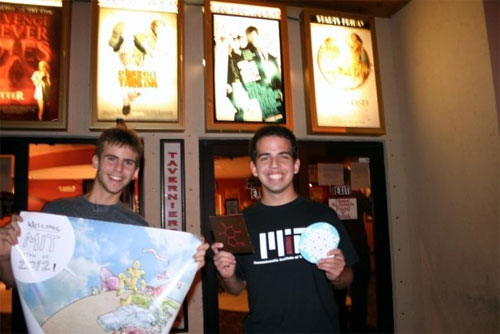 Fausto writes, “Me and a friend (non-prefrosh … sorry, I needed someone to hold the poster up) going to see 21. No book … but I brought MIT stuff!” 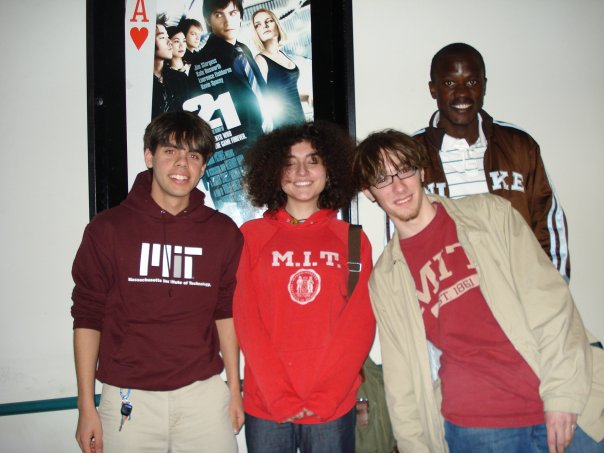 After the blog entry was posted, Steven ’12 wrote, “Nooooo!! I just came back from seeing 21, WITH 3 MIT PREFROSH!! AND TOOK PICTURES! (and even put them on the MIT Class of 2012 website SO if you wanted to put a picture up it would be really cool and I would love you forever) (and ever) (andevveerrrr…)”