poetry, guitars, a hardware hackathon, and the time-to-pee scheduling metric

Some of you may be wondering why I dropped off the face of the blogosphere shortly after going French.

That story has three parts. It begins with not having enough time to pee, then moves to my poetry class, and culminates in a hardware hackathon.

When I was putting together my Freshman Spring schedule on the wonderful planner.mit.edu, I quickly noticed that my schedule would have a very low time-to-pee.

My current schedule consists of the following classes:

I have 16 classes total throughout the week and 7 times to pee–once after my last class every day, and after 7.013 on Tuesdays and Thursdays. That gives me a fairly low time-to-pee of 0.4375. Yikes.

Last semester, my favorite time to blog was between classes, so rename the time-to-pee metric as “time-to-blog” and–well, that’s my excuse for being so absent.

The low time-to-pee is especially compounded when I have Intro Media Studies (green) in Building 1 and Poetry Workshop (red) in Building 66, on the other side of campus. Every Tuesday and Thursday I can be found sprinting across Killian Court to get to poetry on time. But that leads me to the next part of this story.

William Corbett is the teacher of poetry workshop, indubitably my favorite class this semester (though media studies takes a close second). We’ve spent the last 3 weeks of class just reading and discussing poetry–one poem chosen by each student, in a class of about 30 students. And as it turns out, poetry takes many forms. We’ve so far seen everything from “chestnut” poem “The Road Not Taken” by Robert Frost to Billy Collins’ coming-of-age poem “On Turning Ten” to childhood favorites by Dr. Seuss and Shel Silverstein to music by Bob Marley, Tupac Shakur, and the Red Hot Chili Peppers. Each one leads to discussions about maturity, childhood, war, the inherent nature of humankind.

Poetry is a philosophical and dynamic sort of art–sometimes incisive, often ambiguous, steeped in imagery and atmosphere narrated by ageless voices. Take the introduction of “The Fall of Rome” by W. H. Auden:

The piers are pummelled by the waves;
In a lonely field the rain
Lashes an abandoned train;
Outlaws fill the mountain caves.

Four simple lines, and a montage of images–lashing rain, piers, abandoned tran in lonely field, outlaws, mountain caves–swell to life in the imagination. I’ve been posting my favorite poems from the class on my Tumblr, and I’ll continue doing so. We start writing our own poems in class next week, so I might put up some of my own work throughout the semester. Stay tuned.

3. The Romanticism of Hacking

I blogged last semester about a hackathon I attended as a photographer-and-observer, and I expressed a wish to one day participate in one myself.

That day has come. Over last two weekends, I said something along the lines of “yolo” and decided to attend MakeMIT, MIT’s first ever hardware hackathon. Though the sleep deficit it gave me meant I was exhausted for about two weeks (to which I also attribute my blogging hiatus), it was one of the best decisions I’ve made while at MIT. 3D printers, laser cutters, and soldering irons galore (courtesy Formlabs and MakerBot). Raspberry Pis and Arduinos everywhere. Tables of linear actuators from Rise Robotics and the new XBox Kinects from Microsoft. Rapid prototyping and even-more-rapid sifting of piles of resistors, looking back and forth from a resistor color code reference sheet.

MakeMIT took place over two weekends (unconventional for a hackathon–but this was a “hardware hackathon,” so exceptions were made). On Saturday, February 15, from 9:00 AM to 11:00 PM, students from all over Boston hacked their way through the day. The top ten teams would win a chance to compete again the following weekend on February 22, with access to more materials and the MIT Hobby Shop machining tools. The top three teams would win cash prizes.

“Make something you wish existed,” said one of the sponsors. And so it happened. One team built Lexo Glove, a motorized glove designed to translate text into American Sign Language hand movements. Another build an entirely mechanical puzzle box that only opened when placed on a table and spun. Yet another build an LED matrix for playing Flappy Bird.

My team built Jukelele, an electric guitar about the size of a paperback copy of Atlas Shrugged, with an extendable fretboard so that pitch depended on how much the fretboard was extended. We started with just two people, including myself. It started with an array of resistors on a small piece of foam posterboard. 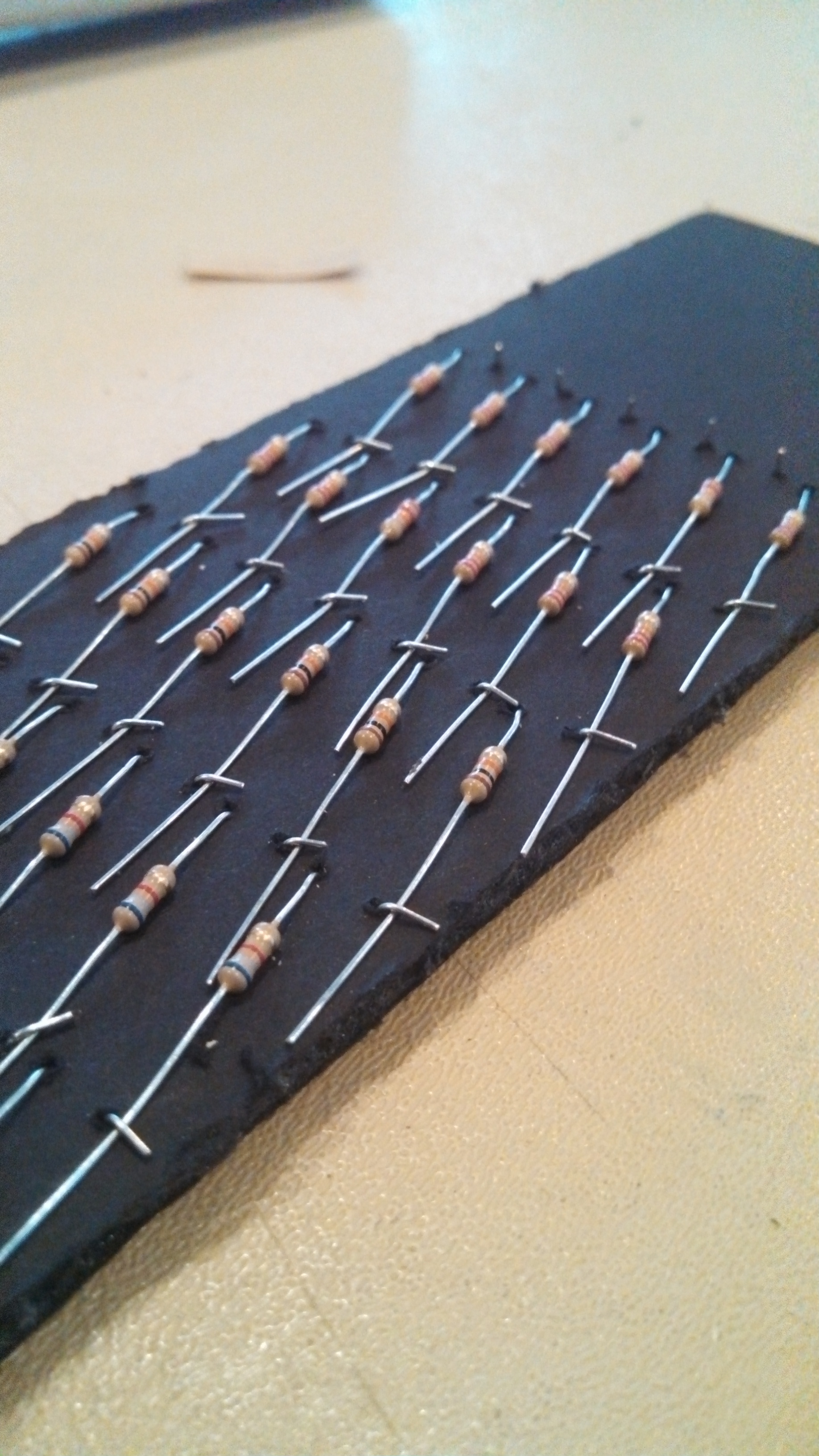 By the end of the day, we had a working fretboard (which works essentially like a specialized voltage divider) wired up to some switches (one to “pluck” each guitar string) and an Arduino, all being fed into a Pure Data program that read the voltage from each wire and played a very crude note in response. To our very great surprise, the judges decided we were top ten material and selected us for a big two-minute (and fairly sleepy) final presentation, and then we were on for Phase II. Below, you can see the fretboard prototype in my left hand during our presentation, and some bits of the Pure Data visual program on the projector in the back. 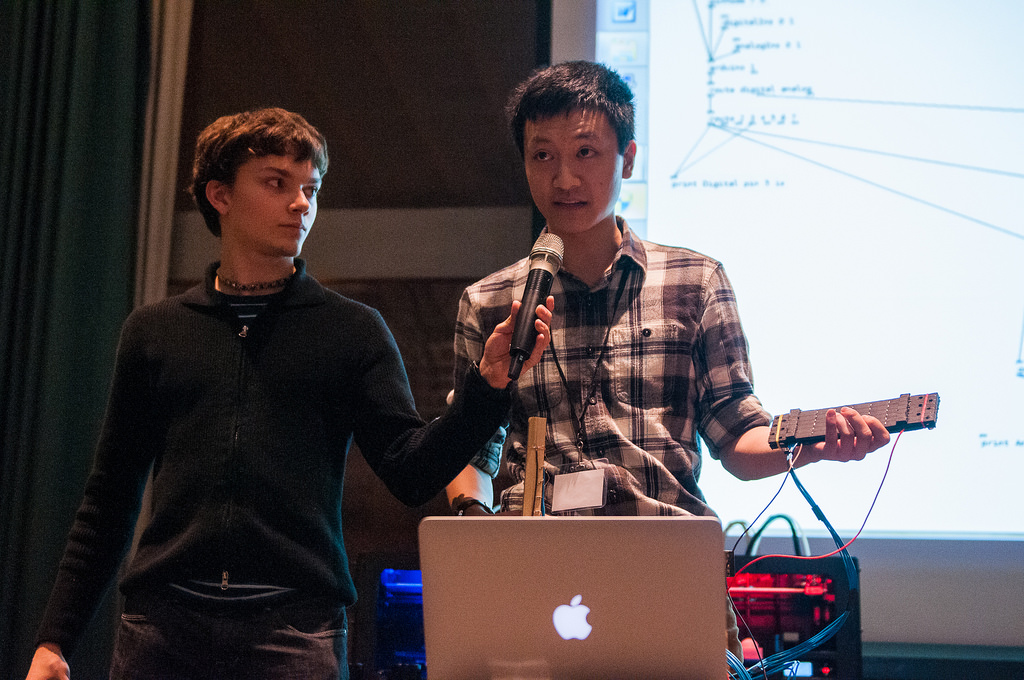 For Phase II we realized that we were very short on hands. Teams were supposed to be 3-5 people, and we only had two. My teammate emailed a few mailing lists asking for people to join us, and by the next week we’d solicited some extra help to join us. As Saturday rolled by, we swapped out our switchboard for real guitar strings wired up to a certain voltage (“pulled high” is a phrase I learned this weekend) and activated by “plucking” with a metal pick wired to ground. We shortened all our wires, zip-tied everything together, wired on some pin headers, and shoved everything into a little project box about the size of two palms for a small, ukelele-size form factor (form factor is another phrase I learned this weekend). The fretboard went onto a drawer slide tied to string wound around an encoder (a method for measuring distance), and the Arduino connected to a more sophisticated Pure Data program I spent all day developing while my teammates worked mostly on the hardware components. I’ll post pictures when MakeMIT uploads pictures from Phase II.

It is literally mind-blowing to think that just two weeks ago we sat down with a very vague idea–“pocket-sized electric guitar!”–and as of this weekend, it exists. That’s crazy. And it takes a hackathon to really understand that. And, despite being intimidated at my freshman-level skill set, it turns out that when you dedicate an entire day to one project you can get a lot done. My teammates and I learned Pure Data totally from scratch, and when the room is pretty much overflowing with free equipment and electronic parts to use, well, you can pretty much become a Master Builder, LEGO-style, in the space of a single afternoon.

This story has a postscript.

During Phase I, I was working at a soldering station when I overheard a conversation taking place at the next table between two hackers.

1: Hey, that looks intense! What are you working on?
2: Oh, I’m not really a hacker–I’m just here helping my boyfriend’s team…I’m trying to follow this picture he drew me to connect these things. He’s waiting in line for something, so I’m working on this…

Two things struck me about that. First, going into the hackathon, I probably had about the same skillset in terms of hardware and electronics as that girl helping her boyfriend. Second, no assumptions at all were made about her–despite her insistence of being “not really a hacker,” to everyone else, she was a hacker just like them, working on a project just as awesome as theirs.

That conversation stuck with me, and I suppose taking a poetry class at the same time spun up some gears in my mind and got me thinking that (1) engineering can have its own flavor of romanticism and dating life, and (2) women really shouldn’t be afraid or intimidated to pursue engineering. It’s significant, I think, that this conversation occurred with a male hacker’s girlfriend, while if the second person had been a female hacker’s boyfriend the story would probably have been a rarer one. I decided to write a poem to try to reflect these points–you can read “On Loving an Engineer” on my Tumblr.

That’s all for now–stay tuned, because classes are picking up, airplanes are being built, and the snow continues falling on the frozen fields of MIT.