a love letter to rice cookers by Kidist A. '22

There are two meals I’ve had consistently this quarantine: for breakfast, I have an egg sandwich with tea, and for dinner, I have the juiciest, most delicious chicken and quinoa. This blog will focus on the latter, specifically on the beautiful fact that it is made entirely with our old rice cooker. Yes, a rice cooker. 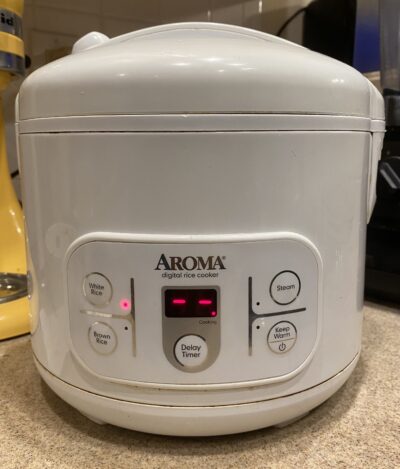 Here she is in all her glory

This rice cooker holds a special place in my heart compared to our other kitchen appliances. It originally belonged to my aunt, but she sent it to my family a few weeks after we came to America. At this point, we didn’t have many other appliances save for the few plates, utensils, and other tableware we brought with us, so many of our meals were made using this rice cooker. These meals were mostly just a variation of chicken/beef, rice, and a combination of random beans and lentils.

I’ve had the recipe I will share later for at least five years, but I’ve developed a special appreciation and intense appetite for it since coming back home. Here are some of my guesses for the reason.

In short, rice cookers are amazing. I hear their younger cousin, the instant pot, has more functions, but they are significantly more expensive. Rice cookers can do the job and are the cheaper option, so they win in my book and in my heart. Admittedly, rice cookers are more expensive than pots and pans, but they’re worth the investment. Before freshman year, I got a little cute rice cooker, but I only used it a few times. I know, shameful. But trust me when I say that as soon as I am on campus, I will be using the rice cooker at least on a weekly basis. Now, I will share the delicious recipe I have been munching on for months. I think it’s especially great for busy college students because it is a relatively hands-free recipe. Also, I like this meal a lot because I’m unfortunately a vegetable-hater,⁠01 yes, I'm a spoiled adult that still hates most vegetables and will only eat them if I don't notice it. It's embarrassing, and I'm trying to change, I promise and this is one of the few meals where I can see the onions and tomatoes go into making the food and not try to pick it out while eating. So, to my fellow vegetable-haters, I hope this can be another recipe in your limited list of acceptable vegetable-including meals.

Before I list the ingredients, here are some disclaimers. Since my mom has been making this for ages, she doesn’t really measure out everything, specifically the spices. The day she prepared this was the only exception. This is all to say that there will always be variation and that this list is not a strict formula. If you find that ⅓ tablespoon of paprika is too much, then by all means switch it up. You can add butter if you want; the options are endless. To help quantify things a little bit, I measured the first six ingredients(it’s in parentheses) in addition to listing the quantity. Additionally, the quantity of the ingredients clearly depends on the size of your rice cooker, so take that into consideration. I don’t want to say for certain that everything is proportional, but it should be. I can definitely see how it’s frustrating to hear “listen to your gut” and “use your best judgment” in a recipe that should provide clear instructions… but listen to your gut and use your best judgment. 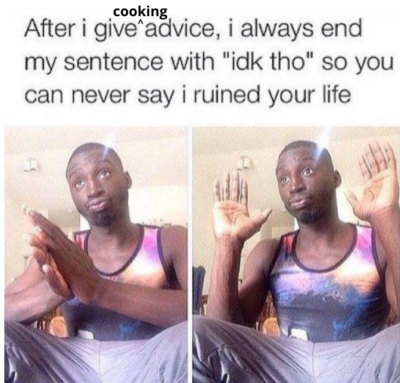 (if you can’t tell, this household loves garlic, and yours should too)

Then Voilà! The final result will hopefully be a juicy, moist, tender, and spicy chicken stew. This was enough to feed four people with some leftovers.

I’ve been having this with this quinoa and spinach⁠03 </span>look at that, another vegetable this meal has snuck in combo. If anyone actually tries this out, let me know! I hope it’s just as fulfilling for you as well. 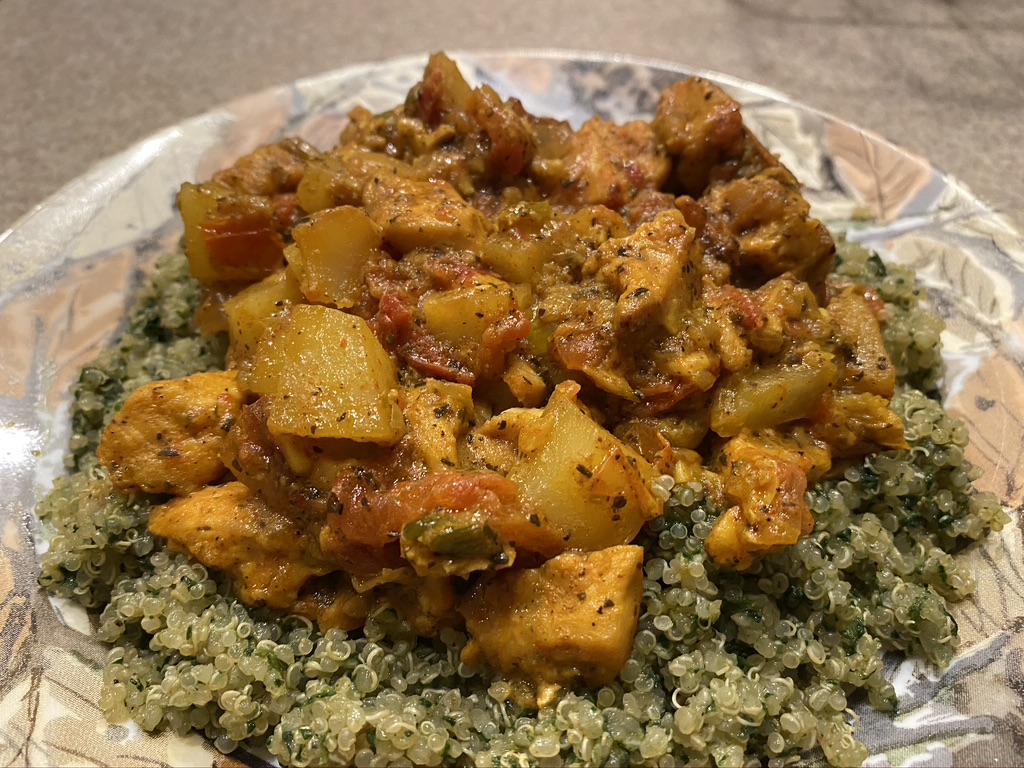