a recipe for making yourself extremely hosed by Alan Z. '23

or, what i'm doing this fall

Before we begin, a word of warning. This blog post is not representative of the schedule of a typical MIT student, nor should it be. It is, however, my current experience, which I guess is worth something. I’ll continue to remind you of this throughout the post, but I thought I’d be up-front about it as well. Without further ado, here is a recipe to make yourself extremely hosed.⁠01 (adj.) bogged down in work. comes from the phrase <i><a href="https://mitadmissions.org/blogs/entry/getting-an-education-from-mit/">getting an education from MIT is like drinking from a firehose.</a></i>

prep time: a couple of emails with your academic advisor
cook time: around four weeks
feeds: one person for one semester

Step 1: Pour nine classes into online registration, making sure to keep an even mix between the courses you’re interested in and major requirements.

At MIT, a unit is supposed to be approximately equivalent to one hour of work per week; three units are equivalent to one traditional credit-hour at other semester system universities. Most classes are 12 units; some are 3, 6, 9, or, if you’re really unlucky, 15, 18, 21, or 24. If you’re taking at least 36 units, tuition is the same no matter what; in general, most students take around 48 units each semester, or 4 full classes.

Well, what are the classes? I’m interested in computer science, math, and writing, so I’ve chosen the following mixture of classes for this semester:

Cool, we’re done with classes! Now, on to the next step.

Step 2: Add in the activities one at a time, making sure to mix well between each one.

We’ve gotten most of the ingredients out of the way now, but before we add our last ingredients, there’s one other thing we have to do.

Take a couple deep breaths and wait while the oven heats up. Look outside your window, and watch the Charles River flow past. 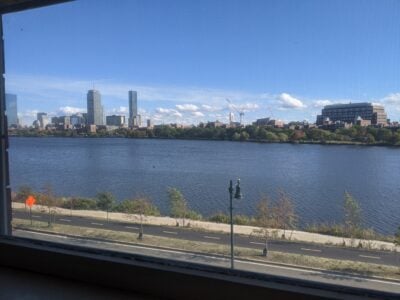 I had initially signed up for my course schedule ready to drop things at the first inconvenience. I made some plans at the beginning of the semester about the order I would drop my classes in, if things got hard. Within a week or two, I had promptly scrapped those plans and ended up with a tiered list of classes I was enjoying. I was still prepared to drop something, but thought I just needed a little more time to figure out what.

It’s now four weeks in, and I still don’t really have a clear sense of what I would drop first. That kind of terrifies me, but I guess I still have plenty of time to figure out, since MIT’s Drop Date is notoriously late; this year, it falls on November 18th, which is notably still a couple months out. Even if I have time, though, I also have to make sure that I don’t burn out and end up doing worse than I would have if I had dropped something earlier. It’s a careful balance, and I’m not sure I’ve found the right point.

All of this is already overwhelming, but there are still a few small things that are missing. I’ve been trying to force myself to be a Real Human Person outside of all of this, and for me that’s meant setting aside time specifically to a) be social, b) go outside, and c) not be doing school work. These, I think, are hard for me in normal circumstances, but are probably more important and difficult now than they ever have been. A few key things that have kept me sane are:

All of these have provided me a brief reprieve from work when I’ve need it, and although sometimes I feel like I burn a little too much time on a crossword or a little too much time on a walk, I think there’s something valuable about this sort of unstructured activity that touches something different from the day-to-day of school and extracurriculars. It’s an easy thing to turn to when I’m feeling stressed.

Step 5: Pour mixture into pan and Bake until you are hosed.

You’ll be able to tell that you’re hosed when the work from two weeks starts to run together, and you move a todo list item from one day on your schedule to the next, and the next, and the next, until everything falls on the same day and you have to stay up later than you want or get up earlier in the morning or skip a class or two to have the time to be caught back up on everything.

For me, this hit me really hard this week—I played a quizbowl tournament last Saturday, and although I’d tried my best to push the work I was displacing earlier and not later, that effort was not entirely successful. It took me until Wednesday to be caught up to where I’d normally be on Monday, and now I’m trying to catch up on the work from Tuesday and Wednesday before all of my classes release new work on Friday.

It’s not horrible, but it’s also not great. I’m looking ahead, looking for a reset day where I’m caught up and can just sit on the side of the river and look out at the skyline and breathe. I’m coming to terms with the fact that that might not be for another two weeks, when we get a long weekend for Indigenous Peoples’ Day. In the meantime, the small things will keep me going, I suppose.

Step 6: Wait to see how the rest of the semester goes.

I’m honestly kind of surprised it’s taken me four weeks to become this hosed. It seems to be a good sign, although I’m not sure of what. Resilience or discipline, perhaps. I’m not really sure what the future will hold, either. I think that the only way to know is to wait and see, and to do one’s best on the journey to the next problem set, the next quiz, the next midterm. The only constant, I guess, is being hosed. As John Mulaney might say, if he were an MIT student, “I am hosed all the time. I am hosed now and I will be hosed later.”

We choose to be hosed for some reason, however irrational. Maybe it’s the love of learning, or maybe it’s some cruel way of trying to prove to ourselves that we can do something. Likely, it is some combination of both. One way or another, every MIT student ends up hosed at some point in their experience. This is just one recipe for getting there.