ft. running 13 miles in the middle of nowhere with petey

I ran cross country from something like 2nd-6th grade, so this was not my first rodeo with running. I was slightly above average at it and generally enjoyed it because most of my friends were in it as well. One of my most vivid memories from childhood is nearing the finish line of the end of season race and just seeing piles of puke spotted everywhere. Mood.

After 7th grade, I totally abandoned physical pursuits and stopped running. I think I maybe had a brief stint with it in the summer before? 9th grade because I very distinctly running up the road near my house to the tune of the first Attack on Titan theme, which is still on my running/athletic hype playlists because it is a BANGER. Other than that, though, I did not do a single sport until college, where I started fencing in freshman year.

I’ve tried to pick up running a couple of times in college, most notably when I lived in LA last summer. But the LA air literally dried out my lungs and not a singular one of the runs I did there were enjoyable. In retrospect, this might just have been because I didn’t know how to pace myself properly.

I’m not sure if I thought my quarantine running stint would stick, but as it turns out, I really had nothing else to occupy my time with. My first run, however, was literally AWFUL. I distinctly remember the burning feeling in my lungs and the nasty taste of overexertion, which tastes like blood.

i ran the first mile REALLY FAST and then just died

Nevertheless, I persevered, and five days after my first run, I managed to squeeze out my first 5K since childhood, probably.

a moderate glow up

I ran for the next week or so and then stopped because it was allergy season in New England. I maybe ran about two times in the next three weeks and thought I would just lose all my gains. Then, on a particularly nice day after not running for a while, I shocked myself by running my first 10K ever.

an ABRUPT glow up

Feeling extremely on top of the world, I ran FOUR more 10Ks in the next week, two of which ended up being 8 and 9 mile runs.

At some point in this interval, I realized that if I could run 9 miles, then I could probably run an entire half marathon. So I waited for the right day, and in the middle of a snowstorm in early May, went for it.

And although I was really proud that I had done it, it REALLY knocked the wind out of me. I remember stumbling inside after finishing, not being able to eat my dinner, and then passing out for like four hours from sheer exhaustion. I had run a half marathon out of sheer force of will, not because my body was trained or prepared to do it. I aspired to be the sort of person who could just get up and run obscene distances before breakfast, and I wasn’t quite there yet.

At some point very early in the pandemic, when I was first getting into running, Petey had mentioned that he does the New Hampshire Half Marathon every year, and I had (ambitiously) expressed interest in participating. 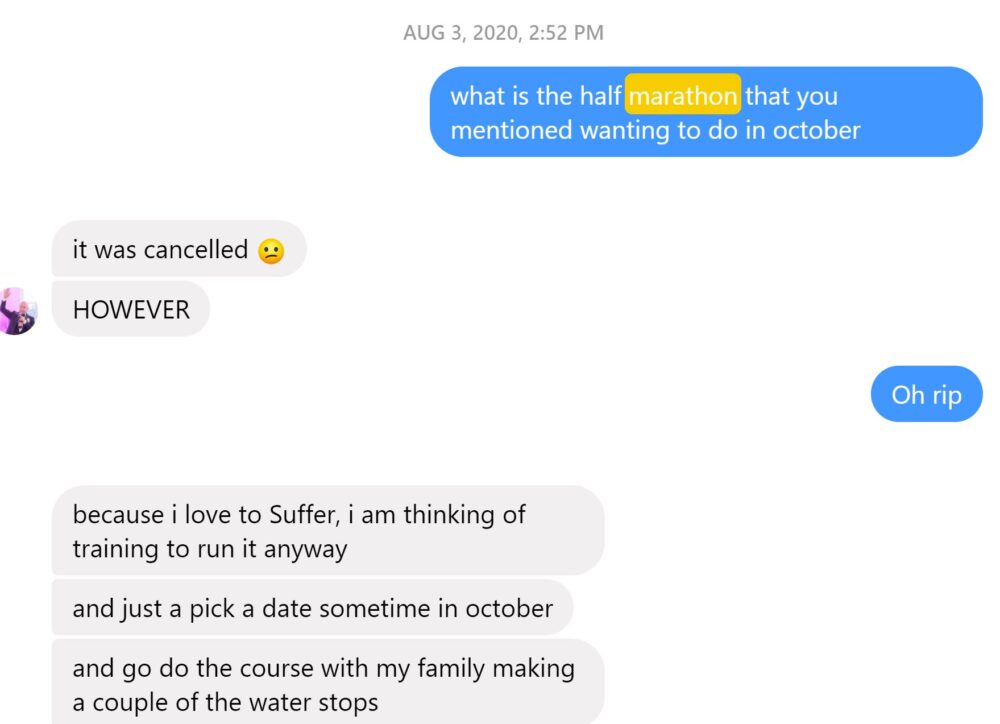 And thus, Petey and I decided to Suffer unnecessarily together and just run the half marathon ourselves. Despite doing relatively little running for the entirety of my summer in Seattle,⁠01 it was too hot, but I did give it my best effort I got my inspiration back and started training again.

notice i restarted on the exact date that i messaged petey, lol

This carried into September, where I did my best to adopt Petey’s training routine. 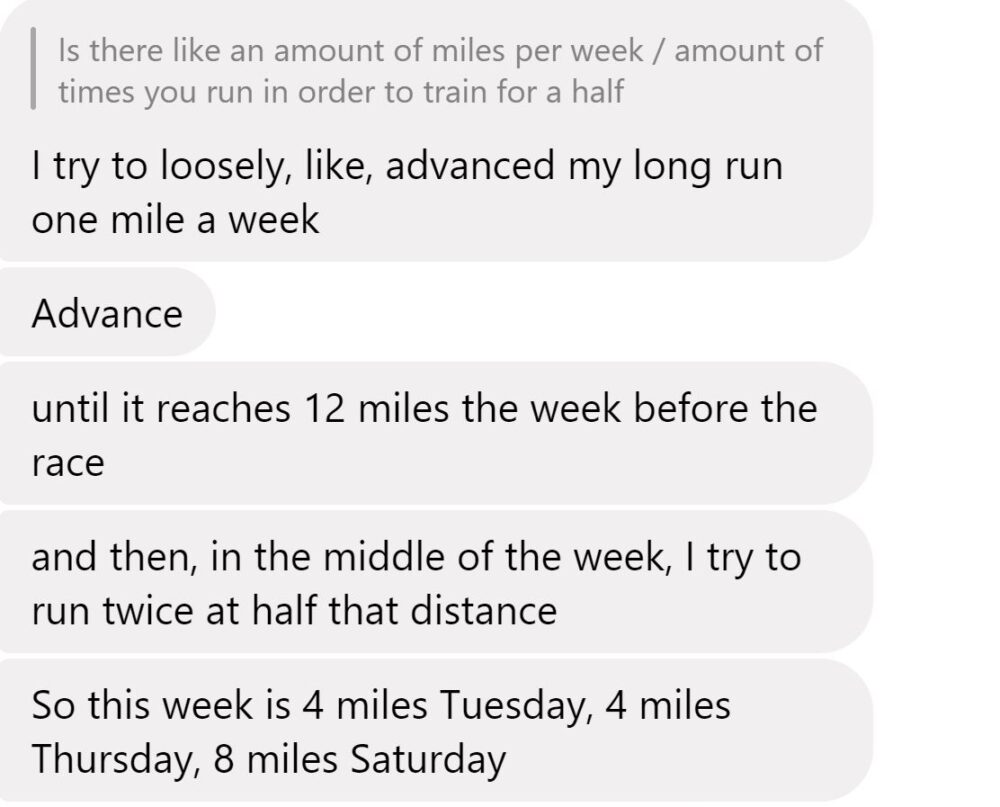 It turned out that this worked quite well for me as well, although I definitely slacked at running during the week. By the end of the training regime, I was running 4 miles at the beginning of the week, 6 miles in the middle, and 13-x miles every weekend, where x is how many weeks I had left until the half marathon.

I started to realize that I was getting better as a runner somewhere around 9 miles, where I just chugged the run out painlessly – and could still walk the next day. After my reasonably effortless 12 mile run, it dawned upon me that after training consistently for 6 weeks, I had actually improved visibly. I could see it in my heart rate at various parts of the run, in my pace, and how I felt during and afterwards.

This is what I’ve really come to enjoy about running. At school, it sometimes felt that no matter how much effort I put into something, I was just doomed to not understand it. I’m sure I’ve improved at a lot of things since coming to college, but it’s honestly hard to see that progress sometimes, as I mentioned in a previous post. Tangible process is what keeps me motivated at this point in my life, which is why I’m going into industry at the next juncture rather than grad school.

And thanks to all of the tangible progress I’ve made over the past few months: this past Saturday, I got to thoroughly enjoy running what would have been the NH half marathon in a normal year, but was still the best run I’ve ever had, with some of the best scenery New England has to offer. 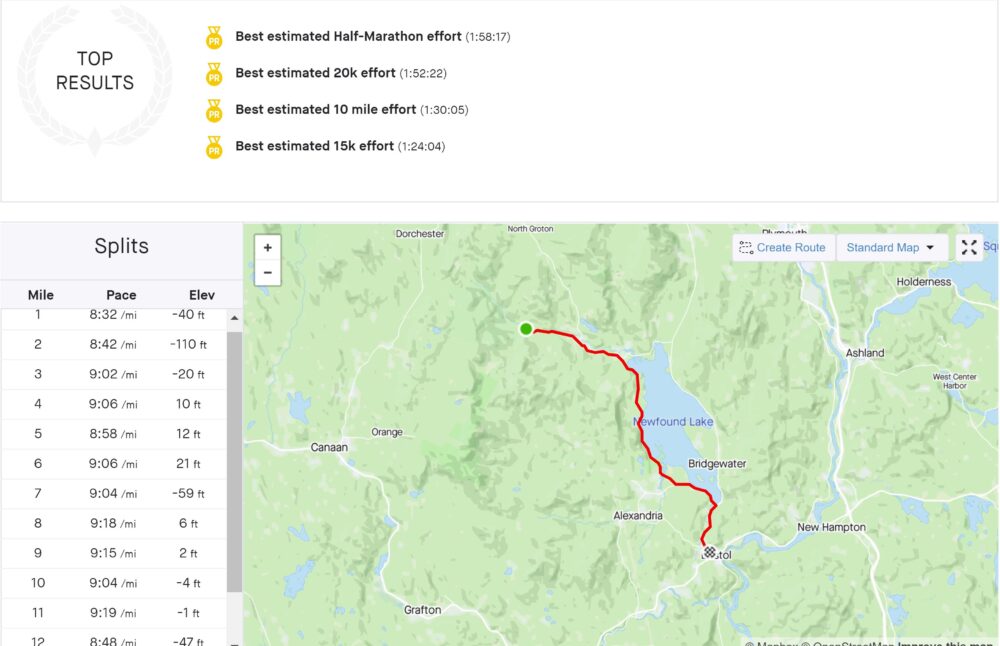 broke all my records and finished with about a ~8:59 pace! 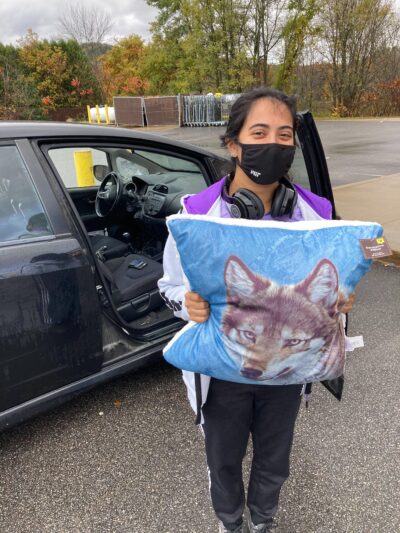 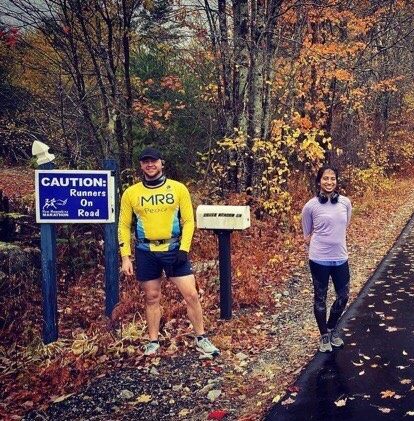 Running is not everybody’s sport, but I am glad that I have made it mine. At least until I can start fencing again, this will certainly be tiding me over and making me feel like I can actually do things that I set my mind to.