Some spring break reflections and thoughts

If this has been posted, chances are, I’m now miles away form MIT in Barcelona, Spain. Several friends and I planned this spring break trip wayyy long ago (back in the fall!) and now we’re actually going! How exciting~ This is my second time blagging from abroad, the first being “Colors”.

There were many, many MIT students at the international terminal of Logan airport last Friday, including Celebrated Fellow Blogger Joel B. ‘18. I was traveling in a group of five, and we ran into people at least one of us knew left and right–students going to London, Iceland, Geneva. It seems everyone on campus was trying to get away from the Institute for a bit if they could, some of us at least to the refuge of sleep and rest in our dorms, hopefully with forays into Boston for food (I did that in years past~)

Believe it or not, though I have been to Ethiopia, China, and Canada many times, and Italy once, this is the first time that I’m traveling to a country that has none of my family members in it. My father’s relatives live in Ethiopia, some of my mother’s in China, and my mother’s sister and my grandmother live in Canada. One of my aunts on my father’s side, Aster, used to live in Italy, and we visited her there.

So, I’m excited! I don’t speak the local language, I have no connection with the nation–I’m just traveling, for once in my life.

While boarding the plane, my close friend Virginia A. ‘18* asked me how American I felt. I responded, “maybe 20%”.

“Really?” she said, “But you’ve lived here your whole life! And isn’t the whole reason your parents and your family came together because of America?”

That’s true. I’ve never truly lived anywhere else–maybe, if I eventually do, I’ll feel more American than I do now, who knows.

This isn’t to say that I feel un-American, it’s more that, well, I just feel like a citizen of the world. One way of looking at it is, I’m a foreigner everywhere–people stare at me a little too long because I look different, and constantly ask me where I come from. Another way of looking at it is that, almost anywhere I go, I think I feel just about as welcome as I do in the United States (assuming I know or learn the language). People in my high school would forget that I was half-Ethiopian, and thought I was completely Asian. Some of the people I’ve met at MIT think I’m just African American when they first meet me. And since I am involved in various cultural groups on campus and talk about these experiences often, a lot of people have mistaken me for an international student.

Indeed, I haven’t found very many people who I think match my commitment to culture and interact with their heritage the way I do. Few people, first, have parents from two different continents and are born on a third. Much fewer speak all the 3-4 languages of their parents and birth country combined. These are things I always think about–growing up like this has deeply affected the way I think and act, from absorbing the traditional rules of Chinese hospitality to having the deeply-rooted familial ties found in Ethiopian culture to the many different types of independence and freedom that are the core of American values.

For better or worse, it’s a simple fact that the world is more connected now than ever. I don’t have to seek out other mixed people to relate to, and when I find them they’re not always relatable–some people identify more with one “half” or the other, or just American. Instead, I find myself sharing experiences with people who are simply multicultural in some way–people born in India and spend 20 years working in Japan, Koreans that emigrate to South Africa, a Chinese restaurant owner in Addis Ababa, a Polish music student that completes high school and later college in the United States, a Costa-Rican that studies business in Washington and ends up doing consulting in Shanghai….

Sometimes you can only be a legal citizen of only one place, but that doesn’t mean it’s the only place or culture or language that has affected your identity. More and more people consider themselves global citizens–belonging to more than one culture or country. I don’t know that it’s that I feel 20% American, as I initially told Virginia, but rather, why can’t I be 100% American, and 100% Chinese and 100% Ethiopian too, because it isn’t as though these things are mutually exclusive. I have a small cousin back in Colorado that has a hard time understanding this, and sometimes says things my brother and I find hurtful, like, “they’re mom is Chinese! they’re not Ethiopian!” But, given that she’s 8, she doesn’t know any better.

“Look”, I told her, taking her hands, “you have two hands; I have two cultures.”

Sometimes you only need your left hand or your right hand, sometimes you need both. But each is whole and functional and very important to you–just like culture is to me. 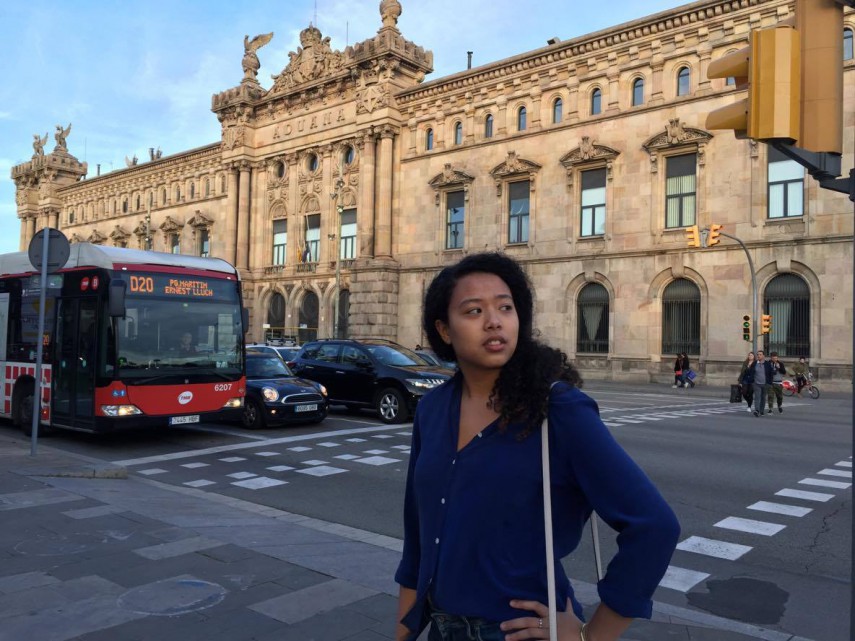 (P.S. I wrote this on the plane initially, but we landed Saturday and we’ve been in Barcelona a few days now, and the picture was taken near the marina in the Gothic Quarter. Excited to write about what I’ve seen!)

(*P.P.S. Virginia is the one who’s room was featured in the Pi Day video, if some of you read the making-of post!)