A Walk down CourseRoad Lane by Joel G. '18

A boulevard of broken dreams and dropped classes

One of Danny B.D’s many contributions to the MIT community, along with a propellor hat fashion resurgence and an infamous tenure as East Campus Historian, is the ubiquitous and indispensable CourseRoad, an open-source 4-year academic planner. CoursedRoad collects all the data about MIT’s courses and majors and lays it out in a beautiful pastel graph that visualizes dependencies and degree requirements, and lets you drag and drop classes to plan what you want to take each semester. Pictures make more sense than I do, but playing with it yourself makes even more sense. 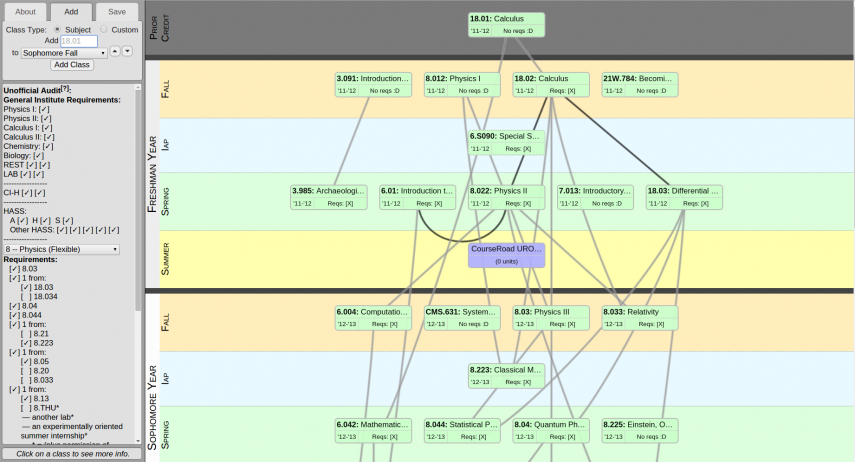 CourseRoad is a wonderful tool because it lets you toy with alternate realities, explore possible futures, and save them all as separate roads. Wondering if you have space to squeeze in an astronomy elective? Add it to a CourseRoad and see how it fits! Want to see what it’s like to be Course <n> without going through all the work of actually being <n>? Build a Course <n> CourseRoad! It’s like a hyper-speed micro-simulation of your entire undergraduate career.

I’ve probably spent more time planning my courses at MIT than I have on all of my biology classes I’ve ever taken, and my evolving road has left a record of all the things I ever thought I’d do here. The first CourseRoad I made was before freshman year…

… which, due to a bug in the system, wasn’t actually mine at all, but belonged to the previous owner of my MIT username (they’re recycled after we graduate). Upon logging in for the first time, I was rather pleased to find that I had in fact already graduated from MIT in 2013 with a degree in Computer Science, and had even vacationed to Cameroon in the winter of 2012.

The first one I actually made looked like this:

Which, in true MIT fashion, changed very quickly. I didn’t get into 24.09 (enrollment was limited), so I took 17.30 instead (which I was perfectly happy with), and daydreamed about getting a minor in political science. I also pushed Chemistry back a semester, switched math classes from Differential Equations to Linear Algebra, and, at the very last minute, added a Media Lab seminar on Magic. Phew!

Then, over the summer, I decided to push chemistry back again (it’s becoming a theme). I also gave up on 24.09 and my political science minor and became obsessed with the exciting proposition of completing an economics minor! I added 14.01 to my sophomore fall and quickly charted my voyage through the degree requirements. 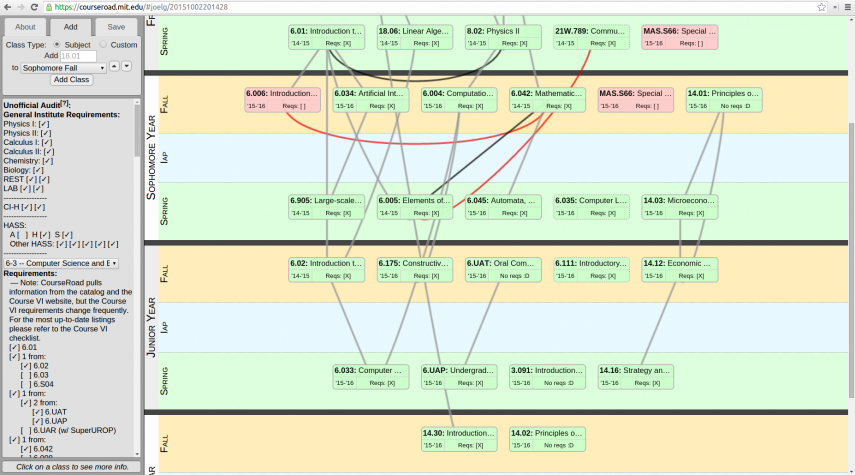 I then added another Media Lab seminar and a fourth computer science class, and had to promise my advisor on pain of death that I’d drop one of them. I didn’t. Instead, two months later, I dropped 14.01, and deleted every other economics class from the list.

This morning, desperately procrastinating studying for a 6.042 midterm tonight, I burned yet another hour reorganizing my life, and demoted chemistry all the way down to senior fall (oops). I’d be naive to think that it won’t all change dramatically by the time that spring registration rolls around, but my current best guess at the future looks like this.

A lightning poll of the six people near me right now indicates that 100% of MIT students use CourseRoad. Talk to your doctor to see if CourseRoad is right for you!