This all starts with a minister by the name of William Archibald Spooner, who Wikipedia advertises as “notable for absent-mindedness”. This from the first sentence of the introduction, where Obama is noted as the 44th President of the United States and Beyonce is identified as an American singer.

Spooner was particularly plagued by a tendency to swap syllables between adjacent words, often to comedic effect. An inattentive student had “tasted a whole worm” (wasted a whole term); our Lord was a “shoving leopard” (loving shepherd); an efficient machine ran like “a well-boiled icicle” (a well-oiled bicycle); and so on. These became known as spoonerisms (or oonerspisms for the similarly absent-minded), and at this rate may well outlive the legacies of either Obama or Beyonce.

Anyway, I’ve been living in Fran Sancisco this summer with (a sizable crew of) seven other MIT students (almost all ’17s, with real jobs at serious companies) while interning at a startup. Interning in SF is a sort of rite of passage for computer science students, and I’d spent both previous summers UROPing on campus, so I was hyped to explore the world beyond the MIT bubble.

So this is me, reporting live from outside the bubble. The weather here is…

Weird. Sometimes it feels more like an MIT campus than the MIT campus does: brass rats at Taco Bell, HackMIT shirts in Starbucks, or class swag on the CalTrain don’t even surprise me anymore. Everyone seems to know everyone and strangers at parties are never more than one degree of separation away.

Other times it’s distant and foreign – people talk about schools and GPAs and SAT scores and about equity and revenue and seed rounds. Introductions are a little too scripted and startup pitches a bit too rehearsed, and you’re never certain if an event is casual or a networking opportunity because so many people don’t make that distinction.

Worse, I feel a strange pressure to somehow justify my very existence: without significant evasive maneuvering, every conversation drifts gravitationally toward “So what do you do?” – a standard formality, extended as a courtesy, as if I was a priori waiting to deliver my spiel but somehow couldn’t find an opening. And then I’m trapped, stammering through explaining my internship while dreaming of lost opportunities to talk about literally anything that someone’s genuinely passionate about.

(I’ve become pretty desperate to avoid this. Things to do when you become desperate include:

These work with varying degrees of success.)

I hoped to enjoy SF, but in too many ways it’s only highlighted what I loved about the MIT. Certainly not everyone’s like this, not every “So what do you do?” carries such one-dimensional expectation, I’ve met many genuinely passionate people here, and I’ve only been around for two months so I’m not in any position to pass real judgement. But despite high expectations I’ve found myself really, really missing home.

It turns out that the “MIT bubble” so often blogged about is both a weakness and an incredible treasure. Inside the bubble we’re all the same – all MIT students – all human beings. There are no positions or promotions or even expectations. You’re free to change what you do, or to do as many things as you want. MIT’s currency is ideas and passion and curiosity, and that’s only possible in radical isolation from a world that runs on literal dollars.

Choud Clambers are a kind of darticle petector that let you see cosmic rays from space, and you can make them at home! I am not making this up. You need a steep temperature gradient (e.g. dry ice and a 400-degree cookie sheet) and a heavy vapor (e.g. alcohol) and an insulated chamber (e.g. an aquarium). 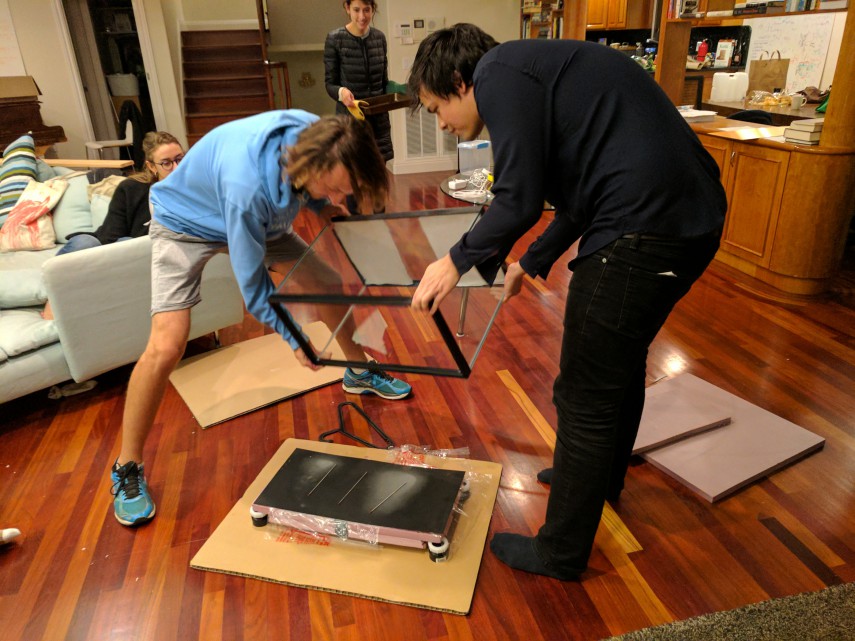 (this all transpired with some friends at Topos House in south SF, for whom this is apparently not particularly new or exciting)

So there’s dry ice below, cookie sheet above, and felt pieces soaked in alcohol pinned to the top of the aquarium. The alcohol diffuses downward and piles up at the bottom in a cloud of supersaturated vapor. Supersaturated vapor is really unstable so when it’s disturbed by a charged particle passing through, a little trail of condensation forms in its wake. This is all platantly blagiarized from Wikipedia; I understand very little of the funderlying isics. 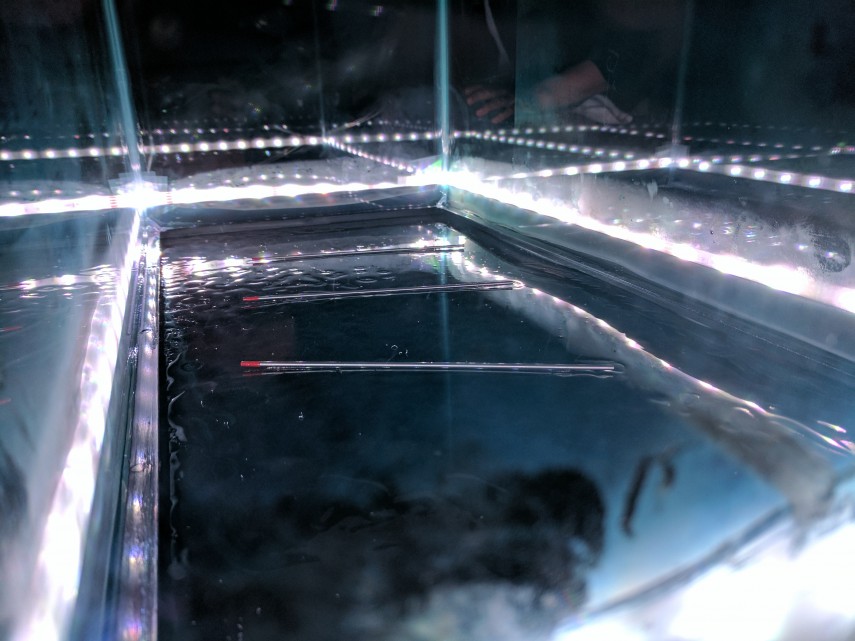 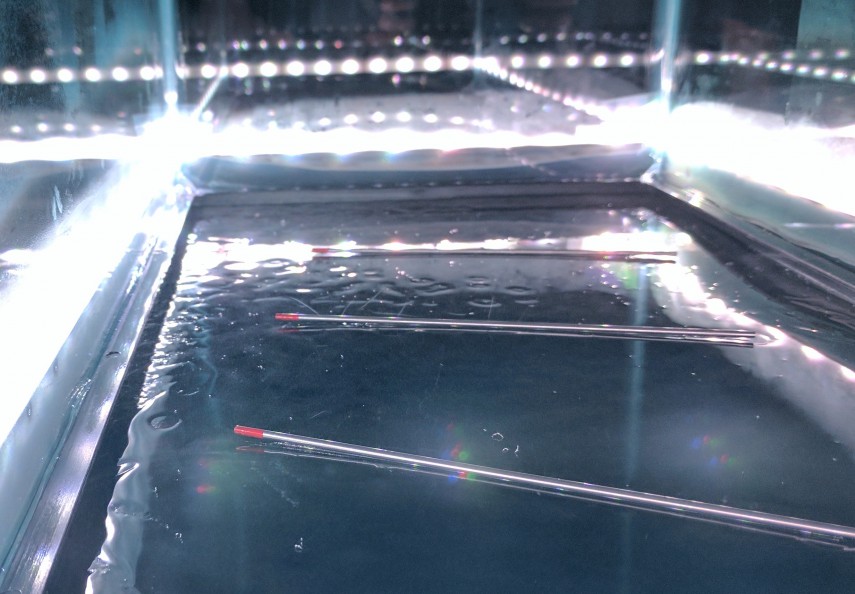 (actual cosmic rays from space are hard to see (although we saw some!) so there are a couple thoriated welding rods (98% tungsten, 2% thorium – the thorium is just a little bit radioactive) that give off much more visible radiation at the bottom)

It also turns out that you can make a homemade fog machine by boiling Glycerin (found at CVS as a laxative) and water over a stove. Laser line modules optional but highly recommended. 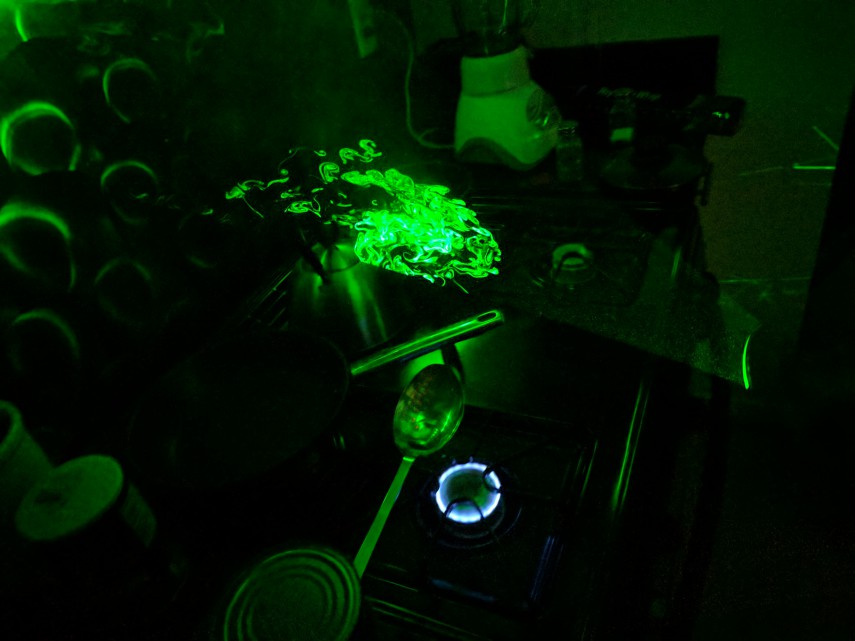 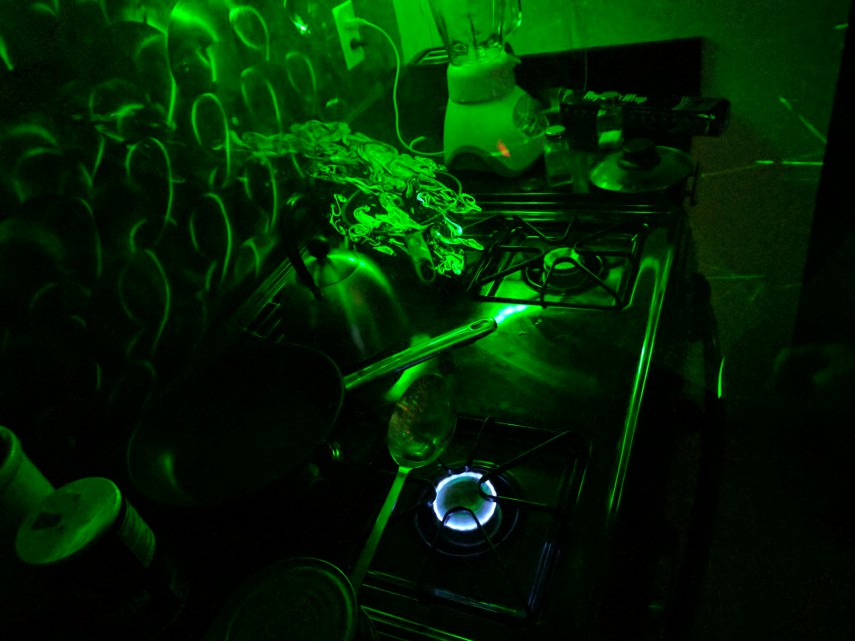 (my roommate, Kevin ’17: caption contest in the comments)