Over the last year, I’ve had the pleasure of being the Undergraduate Association Vice-President, or UAVP, of MIT. In March, I ran for president, with Steve Kelch ’08 as my running mate. There were three tickets. We lost to Andrew Lukmann ’07 and Ruth Miller ’07.

I intended to write an elections entry, but never got around to it. I do have these photos, though.

Me talking at the debate, watched by opponents Dwight Chambers ’07 and Chris Cabral ’07. I have a ridiculous expression on my face. I don’t photograph well, do I? 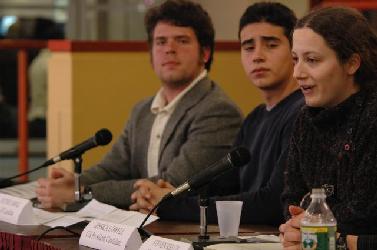 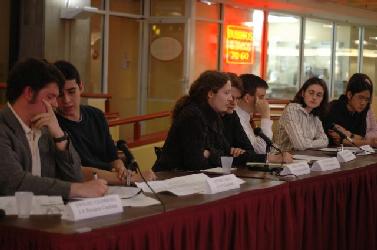 Anyway, the point of this entry is that as of Monday night I’m no longer UAVP.

I wrote a column for the Tech, with a lot of emotional force behind it, that I meant to come out in Tuesday’s edition. It’s about my feelings on where we are and where we need to be going, and why things are not as they should be in the UA. I’ve thought a lot about this. Unfortunately, I didn’t get my column in on time, and the next issue of the Tech comes out for Commencement.

So I decided, why not publish it here? My column is about reflecting on the past and present and looking at the future. And you guys are the future of MIT – well, many of you are, some of my readers are also the present and the past. :)

I’ve always loved thinking and talking about political issues, but before college, I never found a good outlet for activism. It frustrated me that sure, I could go out and protest in a rally (and I have done so), but that my action was unlikely to have a real, direct impact. MIT gave me that outlet. Here, I can do things that will make a real difference.

When I first wrote this, I asked some of my friends for feedback. And they told me that it was good but that it read like a speech rather than a traditional opinion column. Hence the title of this post. Here is my speech:

Over the last year, I’ve served the undergraduates of MIT as UA Vice-President. By the time this is published, I will no longer be in that office, and we will be looking toward a new year. I write this in the hope that it will help both the new UA officers and any undergraduate who cares about campus issues in the tasks ahead of them.

Throughout my time at MIT, I’ve noticed that all too often, the people who truly care about campus issues don’t think of or look to the UA as a mechanism for solving them. I’ve been there. I remember my frustrated freshman self. It didn’t occur to me to get involved in student government, because the only student government I knew about was the prom-planning of the high school level and below, which had nothing to do with the Ghetto Party, the flag policy, the irregularities of the discipline system, or any other matter that concerned me at the time.

What eventually motivated me to get involved with the UA was the example of others. My heroes, in the context of my UA work, are some of the people from the late ’90s who worked to preserve student culture and freedom in the wake of Scott Krueger. A couple of these old activists, now alums, were personal friends, and I talked to them and read the old stories about them in the Tech. I read about what they had been able to accomplish, and against what odds, and through the accounts of their actions I saw what could be done, in the UA and other forums. What I could do.

There’s a lot of angst in the UA about how we can get more people, people who care, involved. One of my major goals as UAVP (and before that as a senator from East Campus) was to provide the kind of example for others that I’d found in my alum friends. I didn’t just want to work and fix controversial problems. Everywhere I turned I saw passionate but disillusioned undergrads, and I wanted, in doing my job, to show them what could be done in the UA. My most satisfying moment this year was when I could tell MIT that the plan to raise roof fines to up to $500 for a student’s first offense was being changed to a plan to require community service for such an offense. Not only because of the change, but because so many people had told me that it could never be changed. And some of those people reevaluated their assumptions.

The UA has made some progress on this front, but it’s got a long way to go. Next House Senator Hans Anderson, in his May 12 column, suggested that senators do not bring resolutions on controversial issues because of the UA’s dependence on administrative funding. I respectfully disagree. I believe that senators don’t bring these resolutions because they don’t think it will do any good. In order to address this, the new UA leadership (and the rest of the UA government as well) will need to change students’ attitudes through the force of their own example.

Reform is important, but the UA must not become so preoccupied with reforming itself that it forgets about its community and its purpose. UA reform is only useful to the extent that it produces better advocacy. There are many issues in the pipeline that will require effective advocacy. The Task Force on the Undergraduate Educational Commons continues its evaluation of the GIRs. The Office of Student Life continues its search for a new Dean of Discipline. Time for Dorm Rush during Orientation is renegotiated every year. A new undergrad dorm is being planned in Ashdown. Undergrads need effective student advocacy as much as, if not more than, ever. And this needs to happen both through the efforts of those currently in office, and through the recruitment and inspiration of new blood.

It has truly been my privilege and honor to work for and with you over the last year – both those of you in student government and those outside of it. There’s a popular belief that MIT students don’t care enough to give feedback when asked for it, but every time I’ve posed a question to you guys, I’ve been flooded with dozens of insightful and impassioned responses. You’ve been wonderful. Keep fighting the good fight, and in the words of ILTFP, keep MIT special.

2 responses to “A speech, of sorts”