Ageing: for all the all-nighters I can no longer pull off, and all the clubs I have gained access to.

Brain and Cognitive Sciences: aka Course 9, my new minor, because everyone should take at least one class about the Brain to appreciate humankind and the self.

Cats: specifically, the 3 cats my hall welcomed this year (including two kittens!). 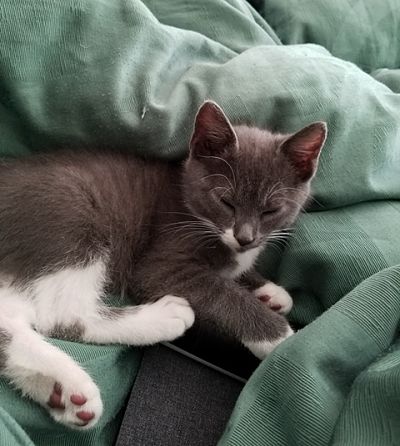 Shadow, 9 weeks old (cared for and photographed by Kristen Y. ’19)

Drinks: I own 31 different teas, mostly decaf. I also currently own 6 flavors of seltzer and 2 flavors of kombucha. Wholesome.

8.02 (“Eight-oh-two”): the mostly-freshman GIR (General Institute Requirement) I can no longer postpone taking. Also the class that gave me a new friend and a renewed connection with an old friend—no regrets over taking it as an upperclassman (plus, I can attend pset parties again!).

Frosh (of First East): for the awesome people I hope never regret choosing MIT, or our hall. Although you will get hosed and jaded, and although the hell weeks may feel endless, I hope you’ll keep loving this place in the complicated, IHTFP, way just like the rest of us.

Gun control: the subject of a blog post I really want to write to finally put my social science skills to good use. My major has taught me some important real-world stuff!

Hell weeks: weeks when you are perpetually Hosed. Unclear if they’ve happened to me this year because every week is an endless parade of job applications and engagements. You wake up, write an article about child cognitive development, finish your Gauss’ Law pset, attend an info session, apply to those 2 job positions that are due in an hour… All in one senior evening. Next week, you might be doing that after an interview in New York.

Interviews: you never know how they’re going to go. And you always want more of them.

Jobz: spelled with a “z” at the end to feel more casual. There’s a whole other set of ABCs associated with the job search process: applications, business cards, CareerBridge, coffee chats, cover letters, dinners, info sessions, interviews, networking, resumes… The process takes a whole 12 units out of my week, but, on the plus side, has definitely improved my social skills and dining etiquette.

K: the typed affirmation you get when you and your friend have planned an awesome get-together. You’re getting burgers together or something.

Letter grades: not important if you are, say, a Course 6 (Electrical Engineering and Computer Science). Important for people looking for jobz like me. Unfortunately, MIT classes have some whacky number scales: sometimes, the class average is a 40%. And you never know if a 68% on a test will get you a D+ or an A-.

Morality, Neuroscience of: aka 9.46, the class that has expanded my view of mankind and invalidated all possible arguments against speciesism I heard in 24.03 (Food, Ethics and Politics of). Perhaps I’ll soon collect my thoughts on all that we learned, but for now, my mind is overloaded thinking about itself. Turns out, even political beliefs are highly heritable. And a tumor can, until removed, draw a perfectly reasonable adult into a life of crime. And the language we get asked the question in (native or second) can determine our moral judgement… It’s a lot.

New York, NY: recently got flown to NYC for a second-round job interview. The company put us up in the Sheraton Hotel in Times Square and fed us at a $$$$ circus-themed French restaurant (I did not even know $$$$ restaurants existed!). The restaurant used to hold legendary status on New York streets, but apparently went close to bankrupt last winter after it hosted a $35,000 per plate fundraiser for Trump—that’s where they wined and dined us with the company’s top managers and directors. It was very fancy, and I met some fascinating people. First impressions of NYC: everyone moves really fast, but because everyone is moving, it ends up being very slow; also, Central Park is a stand-out oasis in the middle of a giant grid. Boston doesn’t have a grid, and that gives people much more space. I like Boston.

Outings: I have started including meetings with friends in my Google Calendar. I also semi-purposefully buy extra clothing for a reason to go downtown (to return it). Results: health benefits of socialization and long walks.

Political Science: aka Course 17, my major. Shows you how to apply statistics to answer the world’s most fascinating questions. A hybrid of math and life.

[Reuse]: the start of the subject line to the most valuable emails. From Reuse events and emails, I have gotten the following nice items in good condition: IKEA full-sized mattress+bed frame, air conditioner, leather couch, lounge chair, office chair, comforter, electric kettle, brand-name bags, shoes, and jeans, and a fancy men’s shaving kit. My room looks like that of a True Adult.

Stop Our Silence [editor’s note: now called The F-Word]: the student group with an important mission: we aim to bring out underrepresented students’ voices on topics like gender, sexuality, consent, and their connections with culture, religion, and the MIT experience. ​We also put on the yearly production of The Vagina Monologues! ​People of all identities and beliefs are welcome. If you’re on campus, come meet us! If you’re not on campus, i will blog about SOS soon.

Tapestry: the beautiful piece of art on my wall that is covering up the splatter-painted “art” East Campus freshmen created during this year’s hall rush. What is on the tapestry is the closest the artist could come to painting a scene from Disney’s Tangled without incurring Disney’s wrath. It is beautiful, and I have the freshmen’s mess to thank for that.

(H)ULU: alphabetically, it’s a stretch, I know, but I currently have a Hulu tab open in my browser and the u’s are very distracting. Also, can’t deny that video streaming services have been an important part of my life (sorry, Ben Jones #24). But now that all the (trash) CW shows’ new seasons are starting, at least I can watch them with friends!

(The) Vagina Monologues: hopefully, not just about vaginas this year (not that the play ever was). I’m now the president of SOS, the group that puts on VagMo, and we want to hear about all kinds of people’s experiences with personal identity.

Women’s and Gender Studies: my soon-to-be second minor, and the department with the best class-to-UROP ratio (took two WGS classes, got two UROPs!). Also, WGS majors and minors regularly go to free delicious pizza dinners together and have access to HBO, Hulu, and Netflix in the department’s lounge. WGS is almost dangerously welcoming!

Xtra effort: for, besides trying to come up with a word that starts with “x,” the effort I’ve been putting into time management and sleep schedule regulation this year. Is it working? To be continued…

Yes: what I’ve been trying to say to new experiences this year. It’s my last year at MIT, possibly in Boston, and I want to catch up on all those friend/blogger/student/peer resolutions that will expire too soon.

Zzzzs: aka sleep, or that thing that I was supposed to have before I finished my literature review, but this blog post idea kept buzzing in my head. Good night!

Notice a letter missing? It’s Q for Questions! This Thursday, 10/26, 7-9pm, I will host an AMA right here on the blogs! Comment on this post below or on Facebook, email me, or comment in real time on the post that will go up at 7pm on Thursday. I will share my perspectives on the MIT application process, social sciences, academics, life, the universe, and everything!