Some thoughts on decisions and school

I wanted to post this a couple days before decisions came out but could not put my thoughts together while studio’ing it up for midterm reviews, but it’s Spring Break now and time for all of us to take a deeeeeeeep breath —

Have faith in the fact that everything you’ve put forth has been a decision you’ve made/
You’ve put a stamp of approval on every part of the application/
Whatever happens, know that you’ve put forth YOU.

After decisions came out, some of you were happy and would have found the above message totally agreeable and your lives totally rewarding, but some were sad and would have no doubt felt indignant… as if your “best selves” went unnoticed.

I feel the message still stands though – for you, for me. As Emad and Anna have said, undergrad admissions is but a phase and it’s so important to hold on to your dreams.

It was the day of the final review. I left several hours in the morning to draw up diagrams and export drawings from my 3D model – which I spent all night coding… before review time @ 2PM. But soon, I realized a fatal catch-22… while coding allowed me to produce geometry exponentially… it also, well, created too many lines for computer programs to handle! 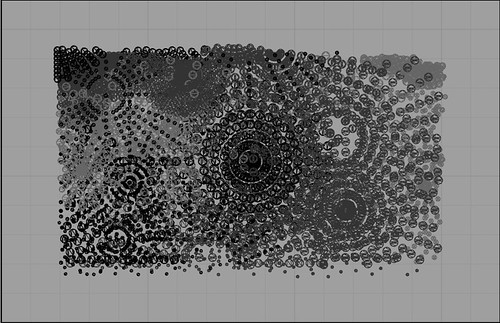 The 3D version of this literally has millions of lines that the program could not flatten and export into Adobe Illustrator as drawings…heck, it essentially went to “Not Responding” every 30 seconds. The professor expected 12 drawings of our 3D models, but I couldn’t get the program to process a single line…

So what happens when I couldn’t get the model I spent all night making (and that actually shows all sorts of interesting effects)…to produce one drawing? Which is what is actually printed and presented to the professors and panel of jurors at the final review???

But I remembered a general lesson I learned in the past couple months as an architecture student, summed up in a quote from Joel, my studio professor from last semester:

“If you’re going to spend that much time on something, commit to it”

(He was trying to make me explain and defend my project more robustly.)

So here I am – with a huge 3D-model file, unresponsive software, and no drawings to show. I could sit there some more and wrestle with the program to try to get a drawing or two out. Or I could screw it and straight up REPRESENT my project as comprehensively as possible…

Last semester, I might’ve chosen the first, but this semester…choice 2 is the obvious way to go. Choice 2 meant screenshots (like the two pictures above). 12 giant screenshots and then some more. I’m pretty much committing a presentation sin, but if that’s the only way I can show the model I’ve been slaving away for and the concept that I’ve cultivated for weeks… then I’ve gotta get over the huge embarrassment of presenting only screenshots.

Presentation time…and I nervously prefaced with “I apologize for all these screenshots…”
And my professor smiled a little and said, “Yeahh…this is pretty bad…”

But whatever, I went on and explained. Throughout the presentation, my professor and the jurors were itching to rip away the screenshots and see some clean line-drawings… but in the end, they were excited to see the results produced from my system, shown in the screenshots. Although the screenshots were a sin, they still allowed me to articulate the details of my concept and explain my decisions when they were being questioned – this ability to really represent my work is empowering, as if I held the steering wheel.

Sometimes, unimaginable ‘end-of-the-worlds’ might spring up and stop you dead in your tracks, blurring your vision for a while, until you realize what it is you’re …actually here to do. What it is you have to show. What it is you’re arguing for. So don’t let go of that steering wheel – feel in control and accountable for where you go. Even if you’re somehow unable to deliver what’s expected, find whatever works to get your thoughts across and help others understand them. Be responsible for your ideas and defend your decisions. Put your stamp on things and stand by them.