Excuse me sir, I seem to have misplaced my pants.

About two years ago at school I was sitting in the computer lab during lunch when a friend of mine ran over and said “You have to watch this.” After navigating through the proper proxies we pulled up YouTube. He searched for “Improv Everywhere Best Buy” and showed me a hilarious video of 80 people, all dressed in blue polo shirts and khakis, just standing around in Best Buy, confusing every single customer and employee there.

“THAT’S AWESOME!” I told him
“I know! And they do all sorts of stuff! Here, let me show you more” he replied

He scrolled through all the videos and showed me The Jumper, Slo-Mo Home Depot, and Cell Phone Symphony. While he was navigating and showing me these videos I noticed some other links on YouTube that had subjects like “No Pants 2k5” or “No Pants 2k4.” Not wanting to check at school I simply ignored them and put them out of my mind.

That was until this last Saturday while I was sitting in the floor lounge working on my LEGO robot when Yuki ’11 ran in and said “Snively, Improv Everywhere is doing their no-pants subway ride at 3 o’clock, you in?”

Since getting to MIT I’ve been a part of several riots and a flash mob. Why not add another adventure to my repertoire?

At 2:15 we left the dorm and headed for the subway. I was dressed in a fashionable leather jacket and blue jeans (an outfit you’ll find me in on a near daily basis) while Yuki dressed up for the occasion in a suit. We went over final plans on the way to the subway:

Improv Everywhere’s No-Pants Subway Ride is a 7 year tradition in New York City. Hundreds of people meet at the subway, split into groups and board different trains. Then, at a designated stop, after the doors open and let on all of the passengers, everybody takes off their pants, puts them into their backpacks, and rides the subway. The ruse is to pretend as if nothing is afoot, as if you’re simply riding the subway and pants don’t matter. You don’t know anybody else and you just can’t figure out why nobody else is wearing pants either. If asked about your bare legs, you simply respond with “I didn’t feel like wearing pants” or “I’m just really bad at poker.” Usually New York is the only home to this little venture, but this year it branched out to several cities around the world (yes, world), including Boston. 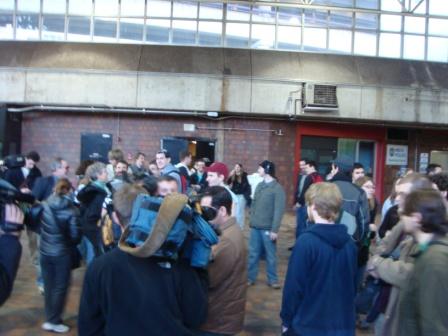 This is when it started to get really exciting, especially when we saw all of the news cameras. At last count there was FOX, CBS, CNN, and ESPN. There were also photographers for newspapers and people that probably just wanted to take pictures of people in their underwear. After standing around for a little bit we were addressed by Agent Adam, the coordinator of the stunt. He explained how the switching of trains would work, how we were supposed to act, and then split us into groups. We ended up being in his group, which was also the group most of the cameras seemed to be in. After getting everything all organized we headed down to the trains. 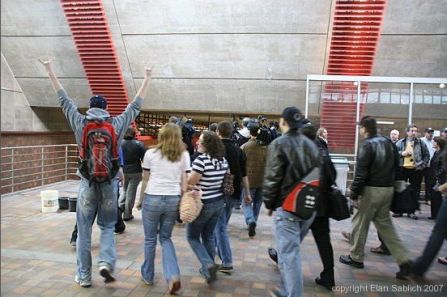 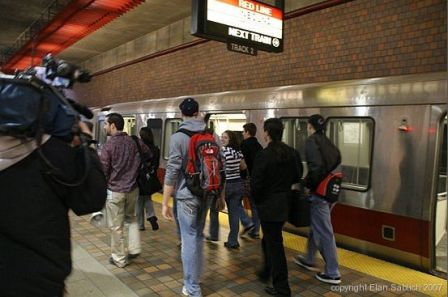 When a large group does something embarrassing the people really don’t mind because they’re in a large group and everybody’s doing it. The issue is starting, who’s going to be the first person to take their pants off? That, um, wasn’t an issue. Those doors closed and the pants flew! It was quite astonishing really, and you learn some things. What? What we discovered is that it’s really hard to stand on one leg and remove pants on a moving subway. 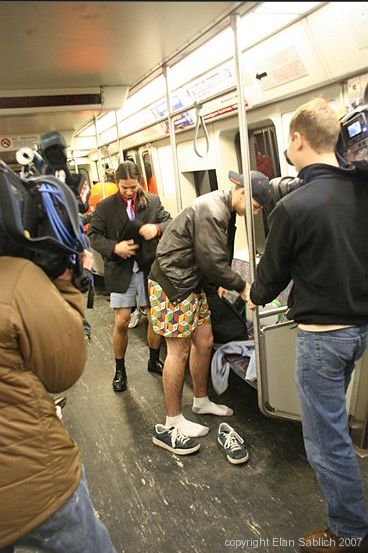 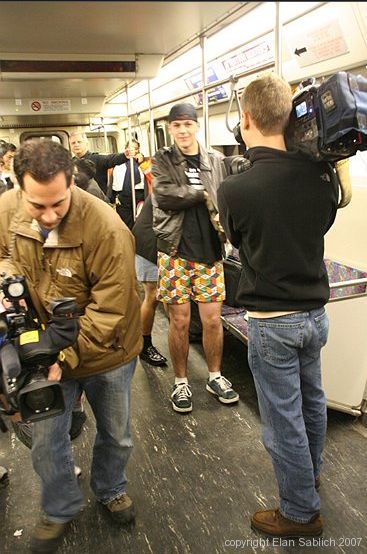 Check out this camera guy on the right, where are you aiming that thing buddy?

So, we were officially sans-pants and on the T. We rode for several more stops, trying to pretend we didn’t know what was going on, but that’s really hard to do when there are so many video cameras, reporters, and police (they stood in the back of the train to protect us from outside forces, whatever that means). 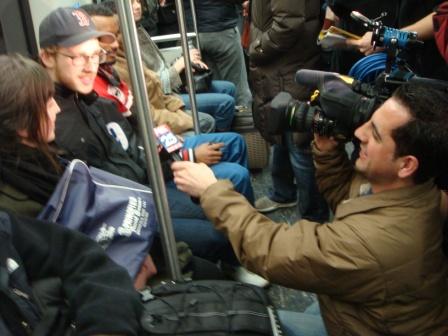 We soon came to our next stop and all got out to wait for the next train. This is when most of the pictures were taken and most of the interviews took place. I stood in the corner playing on an OLPC while Yuki read a copy of Nightwork. 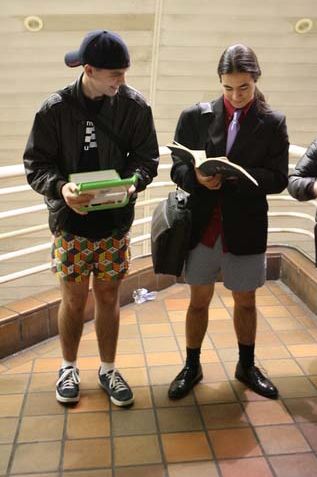 After boarding the train again, confusing even more passengers, it was time to switch to the Green Line. The way the staggering of groups worked out, we all happened to be on the same platform at the same time, along with a piano player. Dance Party!

After dancing a bunch and having a jolly ol’ time it was time to get back on the subway to ride around some more. This is when it got real. No more cameras, no more cops, just people without pants. I rode in a car with about 10 others without pants. We evenly distributed ourselves, I was near the end. I just stood there, playing with my OLPC, and guess what. Nobody gave me any nasty looks or anything. I was standing across from the door, meaning the very first thing that people saw when that train door opened was my underwear, but everybody just got onto the train and went about their business. You know what this means?! This means that you can ride around on the subway without pants and nobody will care! Do it, I dare you, it’s fun!

We soon hit the end of the Green Line and had to switch trains. 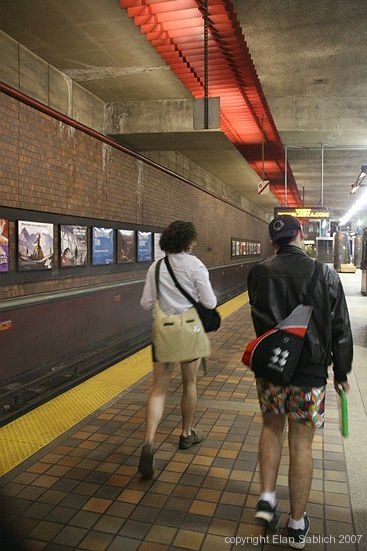 The ride back was more of the same, no cameras and no pants. When we got back to the end of the Red Line we were officially done with our adventure. We all convened on the platform for some group shots and a “debriefing” (the police officer kept using that line, he seemed really proud of it). Yuki and I then boarded the train for the ride home. I pantsed, Yuki decided to take the journey without pants. Eventually we got back to MIT, settled in, and told everybody our story.

Well, it turns out, more people know our story now, because when I checked The Tech (MIT’s Newspaper) this morning, I was greeted by this picture:

That’s me, on page 14, without my pants. Turns out our friend Eric Schmiedl was also on the train taking pictures.

I’ve held off on publishing this entry until I could get a bunch of pictures and videos to along with it so I apologize for the delay. The following video is great though, and worth it. There are two minor usages of profanity, one that was bleeped and one during an interview that wasn’t. Please don’t watch this video if you will be offended in any way, this is a family friendly blog on a family friendly website!

So that’s my story. Check out Imrov Everywhere for more pictures and details from the Boston 2k8 No Pants Subway ride. I’ll see you next year!

(As a sidenote, I’d like to remind the ’12s that they should be near a phone sometime between the hours of 6 pm and 11 pm tonight. It’s telethon night! Maybe we can chat? I think this warrants a TTYS.)