Finally back on the blogs, and it feels so good! (I’d normally start out my blogs apologizing for my lack of blogging, but I think I’ve said it so many times that it’s just losing meaning at this point…)

Last semester was a total blur. In some ways, I did it wrong. 5 classes and a UROP was way too much to handle, especially because my course load was so demanding. I think I might have found myself running on the MIT treadmill a little… hypocritical, I know. But it happens. It’s very easy to get sucked in. Through my experiences last semster though, I was able to understand more about myself and where I’d like to go in the coming years. MIT’s really good at helping you find out about yourself in that way. After all, “experience is what you get when you didn’t get what you wanted” (Randy Pausch).

All wasn’t lost last semester though! I learned about toys, differential equations, and magnets. I made some new friends from all over campus. I declared Course 2! Woot!

But enough about school… after all it is summer, and I figured some of you might be wondering what I’m up to the summer?
Well, I’m still in Boston! After all the fun that I had last semester, I realized I couldn’t stand the thought of being away from MIT for summer (2016s, you’ll see what I mean soon!). On most weekdays, you can find me in the Ideation Lab researching about the design process. Definitely not your typical mechanical engineering lab, but the research is neat!

Aside from UROPing this summer, I’ve been trying to get out and explore Boston/Cambridge! During the school year, I don’t have a lot of time to go out and explore since I’m usually trying to not drown under all the psets that I have to do. But the summer is a totally different beast. I’ve compiled some photos a short blurbs to show you all what I’ve been up to!

Walter Lewin Live!
I’m sure some of you have heard of Walter Lewin? If you haven’t, well all you need to know is that he’s this amazing physics professor from MIT. But don’t just take my word for it, check him out on MIT OCW (He has some incredible 8.01 and 8.02 lectures!).
This summer he’s doing a special series of lectures, so I’ve been able to watch him live! 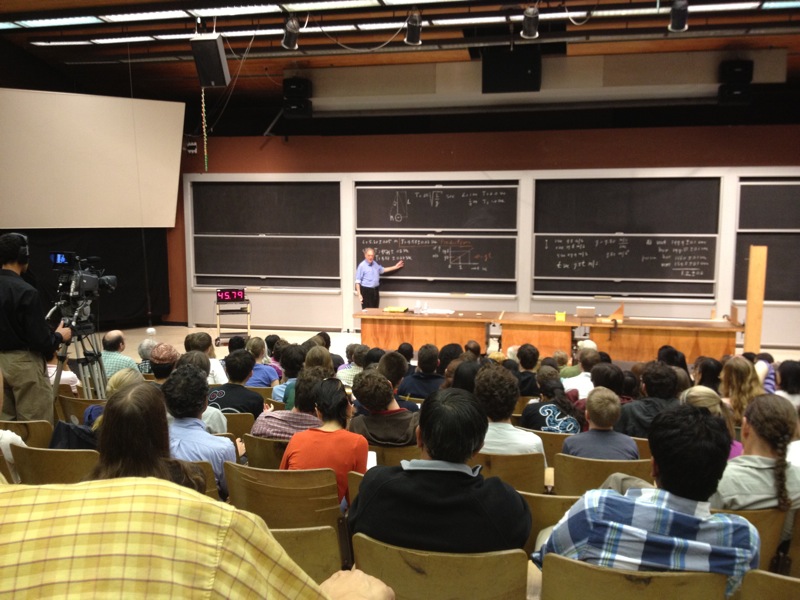 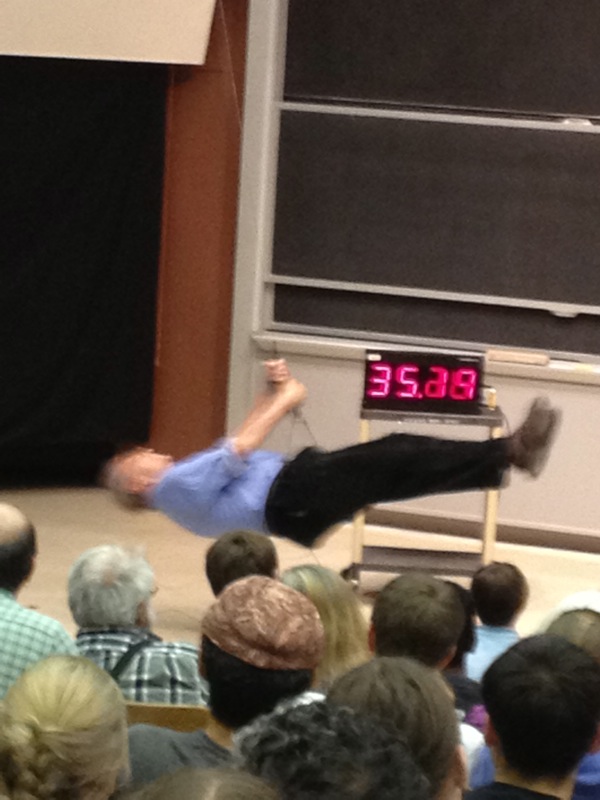 Even though he’s 76 years old, Professor Lewin is still willing to make sacrifices for science! Here, he’s made himself into a pendulum.
(Sorry for the blurry picture, iPhone’s zoom isn’t that great!)

My favorite lecture that I attended though was definitely the one on rainbows, mostly because I learned quite a bit about double rainbows.
For instance, did you know that there’s a dark band between rainbows? Or that the color order is inverted for the second color?
Since seeing is believing, I found a picture of a double rainbow I took this summer for you to see yourself! 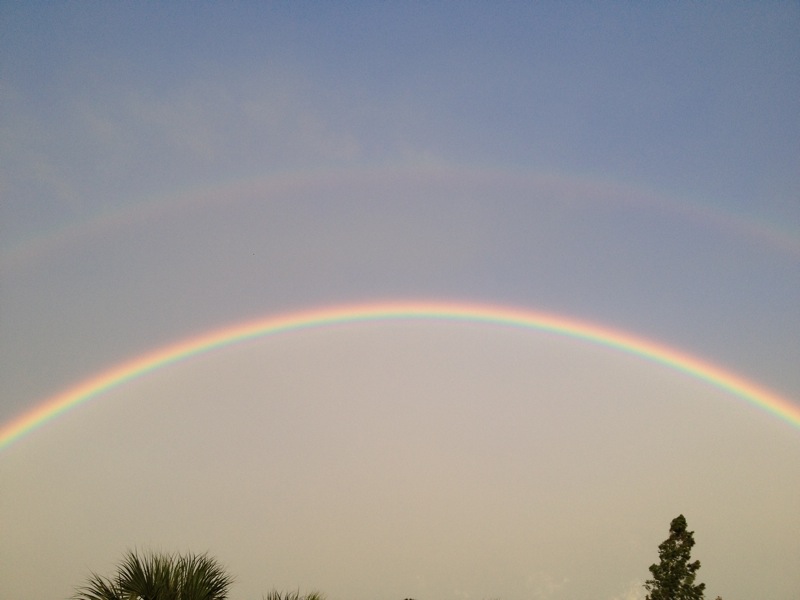 I know I’ll never look at a rainbow the same way!

Eating around Boston!
Because I was on the full 19 meal plan last semester, I didn’t really get out very much to try different restaurants in Boston… but this summer, I’m actually able to (: I’ve also been cooking/baking quite a bit since I’m staying at my sorority house this summer, which has just about every kitchen utensil one could ever need.

I didn’t want to make everyone drool over a billion photos of awesome food, so I made a single collage instead (:
Hope your eyes enjoy the feast! 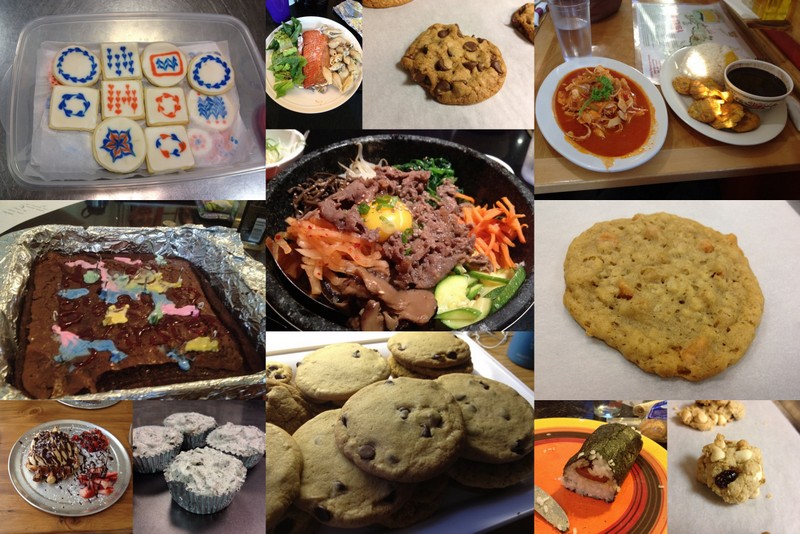 July 4th is probably one of the best parts of spending the summer in Boston. After all, it’s one of the most historical cities in the world!
Because my roommates and I wanted to do this 4th right, we made very elaborate plans to camp out all day on the esplanade and bring an awesome picnic.

Around 1 pm, my roommates and I started to scout out an awesome spot on the esplanade. We chose this nice place near the dock, with a totally unobstructed view of the fireworks. Plus we got to sit along the concrete railing, which was really comfortable. Check out our view! 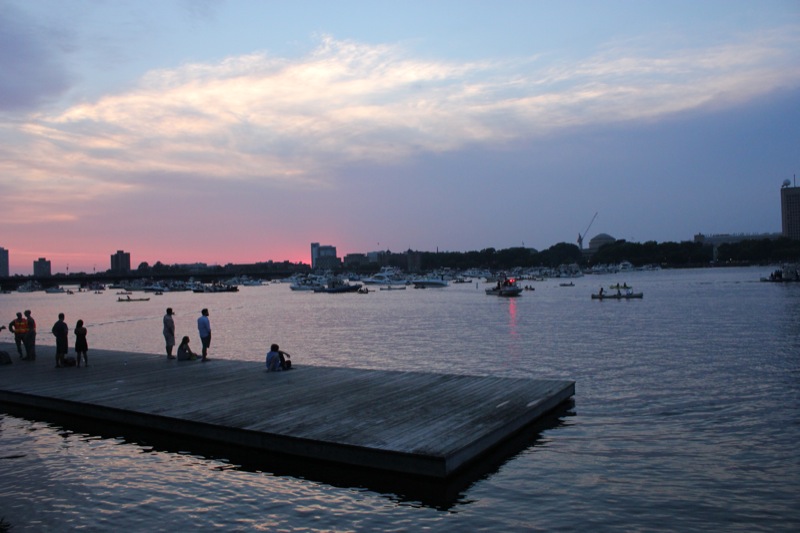 At around 9 PM, the Boston Pops started their concert. Along the esplanade, you can actually hear them preform because they have speakers set up at various points. During the concert, MIT hackers actually had the lights on the Green building show off their own fireworks. Because I thought it was so awesome and needed to be shared, I took a video for all you MIT blog readers out there (:

FourthofJuly from Kirsten L on Vimeo.

At some point during the concert, it actually started to thunderstorm a little across the river… fortunately for us, it was far enough away so we didn’t catch any rain. I was also able to catch some sweet photos of lightning (which is something I’ve always wanted to do!). 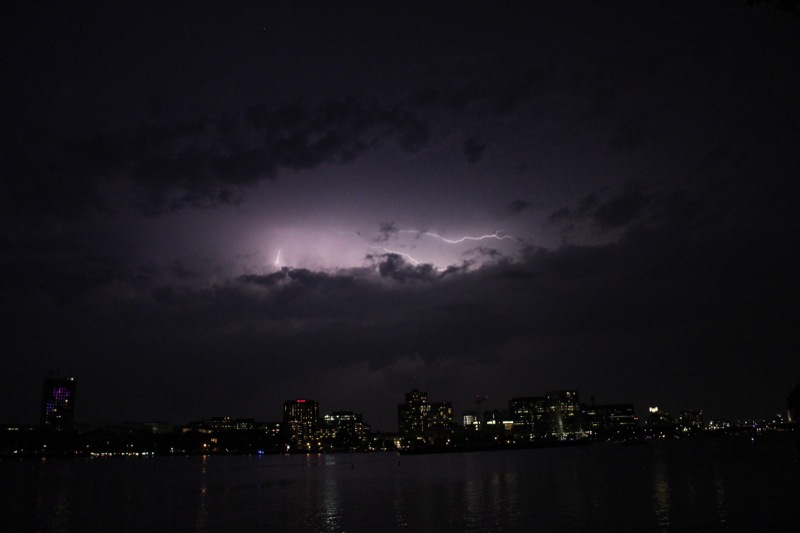 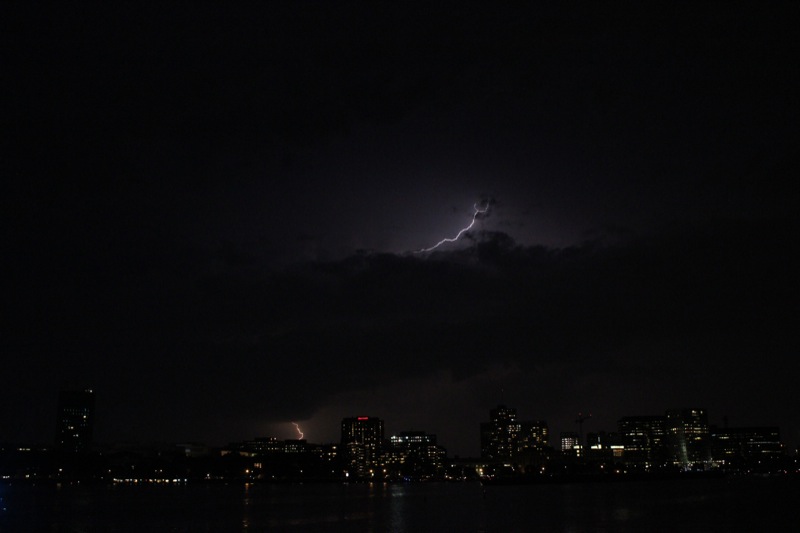 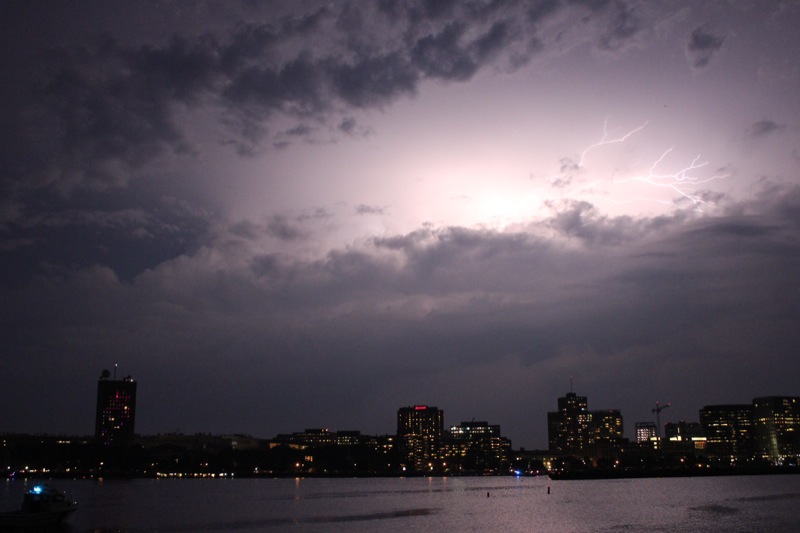 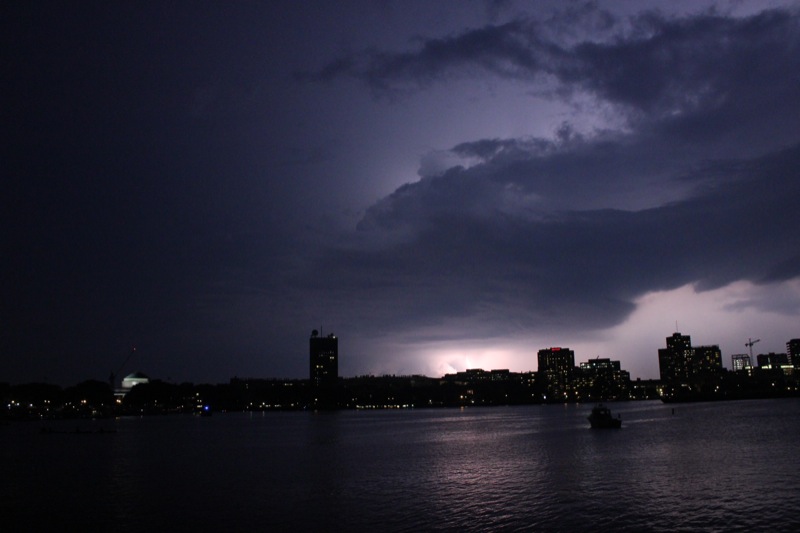 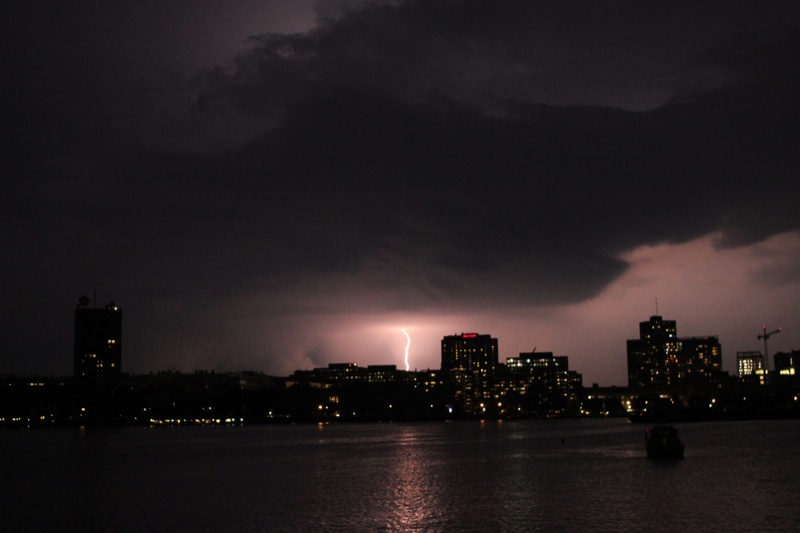 At around 10 PM,  the storm was very close, and we were advised to leave…
Maybe we were a little dumb to do so, but we decided to stay. The storm seemed to be moving away from us, and there weren’t any clouds.

At 11 PM, we finally got to see the fireworks. Right at the time the rain decided it would finally come. It started pouring, and my roommates and I all got soaked as we watched the fireworks go off in the sky. It was actually one of the coolest experiences I’ve had. How many people can say they’ve watched fireworks in the rain?

Eventually the rain stopped, and I was able to catch a small portion of the fireworks! 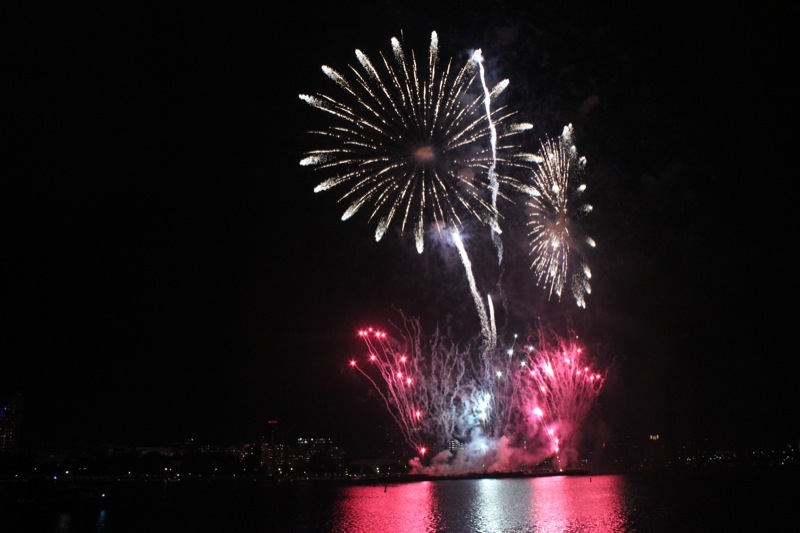 The fireworks were incredible. If you ever get a chance to see them in person, definitely take up the opportunity!

Expect another blog from me soon!
Until then, remember: “Adventure’s out there!”