Being a major in Course 16 (Aeronautics and Astronautics, or AeroAstro for short) has its benefits. For instance, we all got priority tickets to the AeroAstro Centennial (which closed with an Elon Musk Q+A). We get access to our own machine shop, laboratory, and lounge in the basement of building 33. And this year, for the first year ever, the AeroAstro sophomores get an all-expenses-paid field trip, touring all the major aerospace organizations on the West Coast: Boeing, Blue Origin, JPL, SpaceX, and Northrop Grumman. 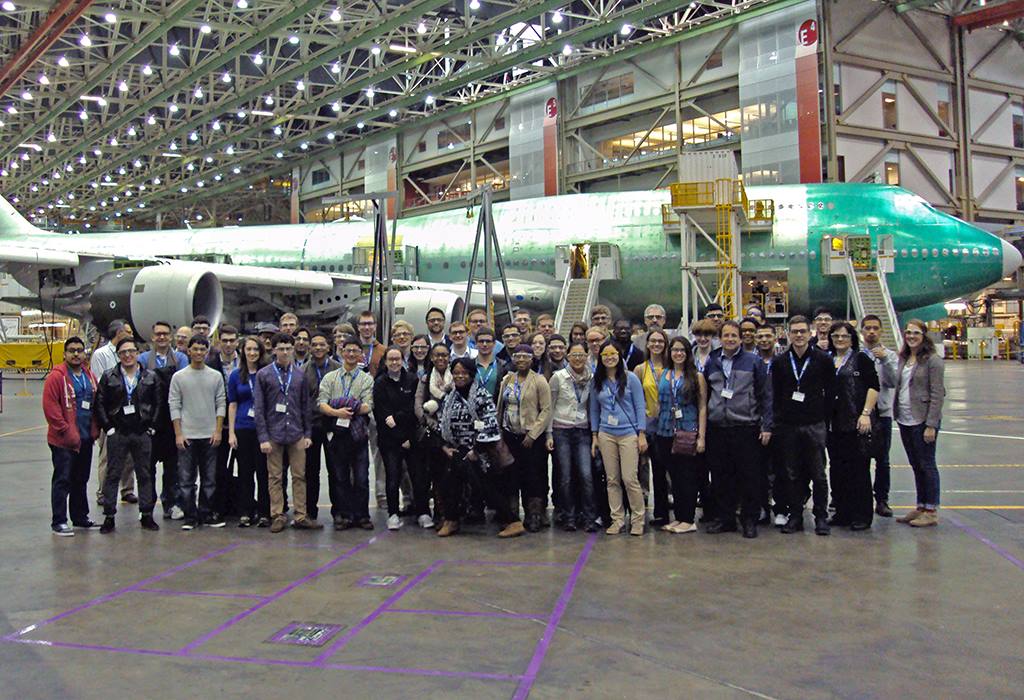 So there we are, the students of the sophomore “aeroastro boot camp” known as Unified Engineering, smiling in front of a 747 at the Boeing Everett plant. That’s the biggest commercial Boeing plane inside the biggest building in the world by volume. It’s perhaps difficult to visualize how big the 747 is until you realize that this was the plane selected to give piggypack rides to the Space Shuttle.

Unfortunately we weren’t allowed to take photos of most of the things we saw. So I’ll take it from memory, in no particular order:

We went to SpaceX, where the ceilings were tall and the factory was all commotion, chrome, and carbon fiber. At JPL, we sat in the mission control room and walked in a simulation-soil Mars Yard. We passed around an aluminum wheel identical to the ones on Curiosity, which costs about as much as a semester of tuition because it’s milled out of a single block of aluminum. We visited Blue Origin, whose facility is spacious and unassuming (not to mention home to a small archive of sci-fi artifacts which includes the model of the Enterprise used in the original Star Trek movie, and also the main door to the CIC of the Battlestar Galactica). And at Northrop Grumman, we saw the carbon skeleton of the James Webb Space Telescope, the infrared successor to the Hubble.

On the way, we passed both the Space Needle and the Hollywood sign, and most of all, bonded with each other. Even though we’d been in the same class for an entire semester already, spending time relaxing, traveling, living, and eating with each other let us connect in a different way, at a level higher than the bonding you get from slaving through psets, labs, and exams together. So I have a feeling that the coming semester is going to be good. We’re freshly pumped-up and newly excited after all the tech we saw and, in some cases, even touched. Semester two of Unified rolls in in February, and I think we’ll be ready to take it on–as a class and as a team. Call us truly, well…unified.