I hit food coma at the first paragraph.

The thing about summer is the weeks kind of all run together, so all the days just sort of bleed into each other and everything starts to feel like one giant meatloaf of beaching and eating and working and shopping and eating and sleeping and eating. (Did I mention eating? Eating food? Lots of food?) Held together by the ketchup that is lab or class or whatever it is that you’re officially “doing” this summer, summer days pile up on top of each other like the laundry I forgot to fold on Sunday. And today’s Thursday. When did THAT happen? Monday through Wednesday are just kind of sitting in the bottom of the pile, unfolded and unblogged.

In a nutshell, summer is a diced onion, once carefully layered and structured but now that you’re in the middle of it, quartered and chopped so that the outer layer is mingling amongst the inner core. Summer is a recycling bin of everything you wanted to do in Boston during the school year but couldn’t, and are now picking out to divide into papers, plastics, Friday evenings and Sunday afternoons. Summer is turning 20 and going out to dinner with twenty of your close friends when you actually told the restaurant you were expecting eleven and having them spit in your sushi.

I’m probably going to hurt myself if I continue getting carried away with these metaphors (did you notice half of them were about food?), so suffice it to say that I think summer is the best invention of all time, short of those razors with soap in them already. I’m living in a fraternity in Boston (which is half as cheap as living in the dorms during the summer, and comes with food) with four hilarious and amazing girls, of which I am always the last to get up. After I get up I go to my job in Building 46, where I’m learning to scan people’s brains using fMRI and code experiments and analyze data and eat free ice cream sundaes courtesy of Course 9 on Monday afternoons. After work we go places, or sometimes we don’t, and sometimes we stay up until 4 in the morning trying to beat the Ultimate Set List on Rock Band. And then sometimes we feel like snoring loudly through lab meetings the next morning.

And then we eat. Excessively. Exorbitantly. Discovering little breakfast places are my personal favorite, but as a group it seems we’ve come to the consensus that all-you-can-eat events are the bomb diggity. Boston has this place called Fire and Ice where you can not only create your own dishes, but they also have half-price college night, and we took their website’s claim of “All you have to do is take a bowl and pile it high with whatever you want,” as a challenge. What would’ve been an otherwise normal and pleasant evening out in Boston turned into a boys vs. girls eating competition, and although the numbers worked out unevenly – 5 girls to 4 boys – their team had Garrett, who once ate 13 pancakes at all-you-can-eat IHOP. (I had four.) 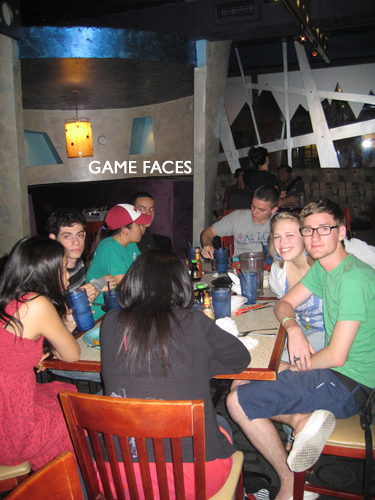 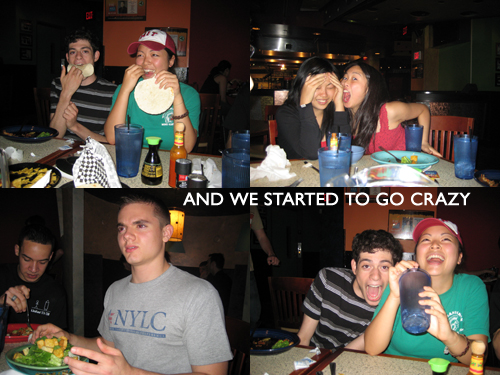 The girls emerged victorious, 23-19 bowls, for a total of 42 (and since this was half-off night, we all paid $10, which averages out to about $4 per bowl). I ate 8. The trick is to keep eating at all times, so you don’t recognize you’re full. (If you came here for tips on how to get into college, I’m sorry to say all you’re going to get are tips on how to eat like a West African lion.) 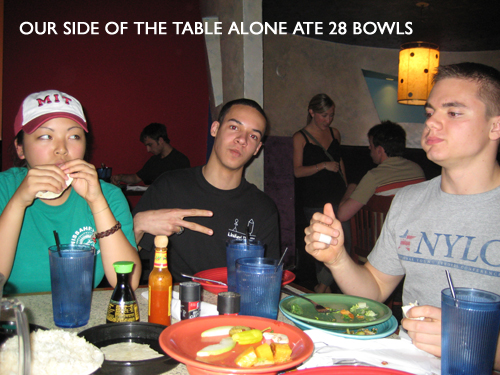 After the girls completely dominated, the losers had to buy the winners ice cream at J.P. Licks, which has some of the best ice cream in Boston and was totally unwelcome after eating 8 bowls of stir fry. (We limped home and went back another night. It tasted like glory, in case you were wondering.)

While we’re on the subject of ice cream, not long after was the 26th annual Jimmy Fund Scooper Bowl, or the nation’s largest all-you-can-eat ice cream festival. The event is held by Government Center and features ice cream from 11 difference ice cream companies, including Edy’s, Coldstone, and Ben and Jerry’s while raising money for cancer research at the Dana-Farber Cancer Institute. And so, we employed our favorite technique again of stuffing our face until food coma – but this time, for a good cause. 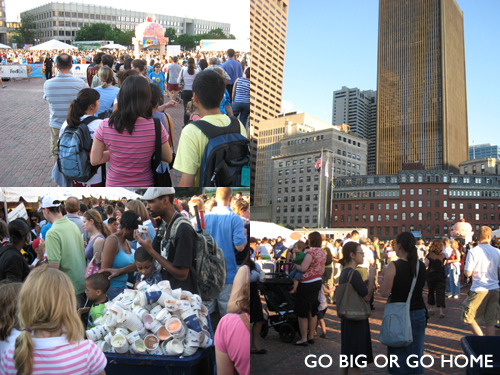 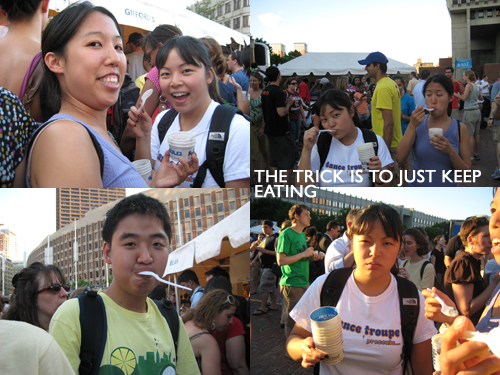 Eventually we made it to our limit – around 9-12 scoops between the five of us, for a grand total of: 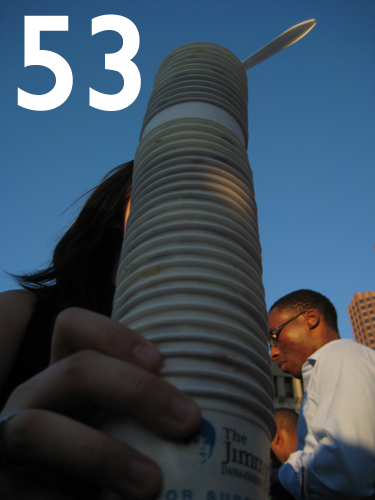 So writing this entry has pretty much put me back in food coma, but my point is that the food can actually be pretty great at MIT – you just have to be willing to go and look for it. Which can be difficult to find the time for during a harried semester schedule, but in the summer, there are no excuses. Except for when you’re full. Give it a little time to digest, because you’ve got to make room for Chowderfest.