On Japan and America. And being an American in Japan. Happy Memorial Day!

(I wrote this entry after spending three months working in Tokyo for use by MISTI – MIT Science and Technology Initiative, an amazing program that sets you up with internships abroad and funds your entire trip – but it never got posted. I’m posting it today because it’s Memorial Day, and if you can’t be patriotic on Memorial Day, when *can* you be patriotic?)(Oh, alright. Duh. President’s Day.)

(For those of you who don’t remember me, I’m a ’10 graduate who once spent three months working in Tokyo. That’s about all the backstory you need. Also, nice to meet you!)

You would be hard-pressed to find a piece of technology as varied in usability, as widely distributed in height, as completely and utterly mysterious as the Japanese toilet. From the bare minimum squat toilet in the ground that is commonly found in public bathrooms, train stations, and unfortunately, at my work place, to the highest of high-end seat-warming bidets that opens the lid automatically upon the user’s entrance, complete with a little spout at the top for washing your hands when your business is complete, Japan’s variety in chosen tool of sewage disposal truly brings the standardized American can to shame. It’s a totally different cultural experience – and much like their toilet, living in Tokyo offers different type of cultural experience that may even leave your tuchus toasty warm.

I’ve spent the last three months working at RIKEN Brain Science Institute in Tokyo doing behavioral analyses and studying the immunohistochemistry of zebra finch songbird pair bonding, and trying to soak in as much Japanese life as possible. Working in a Japanese lab has been an interesting experience, to say the least – while my lab is an international lab run by an American professor, the majority of lab members are Japanese, including Mai, the graduate student I primarily work with. This leads to all sorts of amusing Lost In Translation-type situations in which she tells me to go run the experiment by Monday at the latest and I thought she meant that I should go run the experiment right now, and I end up staying until 9 with Owen Wilson hair when she finds me and finally tells me I should go home and probably get a haircut. 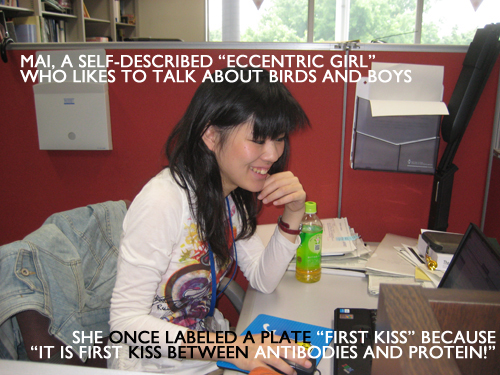 After three months I’ve pretty much become accustomed to all sorts of odd situations in lab, but it took a while to get used to – such as on the day before I started working at RIKEN, when I emailed my boss to ask if there was a dress code. His response: “Well, guys don’t usually wear ties in the summer, and women never do.” While this totally drove me crazy trying to figure out what to wear on my first day (I wasn’t planning on wearing a tie. Is he secretly trying to tell me to wear a tie??), it’s more or less true. There is zero dress code at RIKEN. Which surprised me a little, since as pre-MISTI interns we were all told formality is a cornerstone of Japanese culture, but this doesn’t seem to apply too much to my lab.

To take things a step further, however, there’s no lab dress code. Other people in my lab often wear shorts and open-toed shoes – in fact, Mai has a pair of open-toed lab slippers she changes IN to. The cherry on top of this weird, informally-dressed sundae is that I’m pretty sure I’m the only one who wears gloves. Maybe it’s a sign of seniority – being so good at bird surgery that you don’t even get blood or glue or anti-rabbit antibodies all over your hands like I do – but it’s a little unnerving. Especially in a country where one in ten people regularly wears a SARS mask.

In fact, as an American I find a lot of the Japanese culture contradictory. Japanese people don’t seem to sweat, ever, meandering through Shinjuku Station in heavy winter jackets and snowsuits, even though this is one of the most humid summers I’ve ever experienced. They frown upon eating on the subway and jaywalking and by all appearances, are more observant of The Rules than any group of people I’ve ever met, but I’ve been carded for purchasing drinks at clubs or bars approximately zero times this summer. (The drinking age here is 20, so celebrating my 21st birthday here was a bit anticlimactic.) During work hours, uniforms are standard wear for school children, salarymen, and even train conductors, but Japan is also home to some of the world’s most eccentric street fashion trends (ganguro, maids, lolitas, gothic lolitas…) Public universities are seen as more prestigious than private ones, summer vacation is only one month out of the year, mayonnaise comes on everything, even pizza and once I ate a burger with a hole in the middle filled with mayonnaise.. 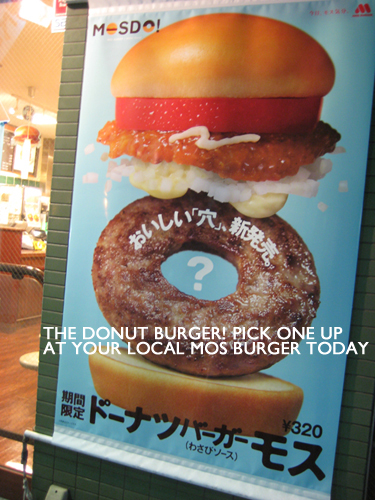 It can all be pretty overwhelming at first. And I won’t lie – for the first few weeks it seemed like I would never leave this strange place where the street addresses make no sense. But as my time in Japan comes to an end I find myself wondering how I’m ever going to reacclimate to a place where the smallest size at Starbucks is a “tall” and the burritos are the size of your face. There are so many ways in which my perspective has shifted about cultural norms, how the United States is viewed by other countries, how tiny and insignificant my place is in this gigundous planet we call home that I never would have gained by staying in the US, and it’s going to be interesting to bring that home alongside my 70+ lb suitcase.

I think the thing that made the biggest impact on me was the revelation the United States is one of the only countries in the world with such a richly diverse ethnic population. It may seem like such an obvious, ubiquitous, wholly unimportant statement, but this is something you don’t truly realize until you live in a foreign country and get stared at everywhere (or in my case, as a Korean American, walk around with your Caucasian and African American friends and get stared at everywhere), and it’s an extremely powerful force that should not be underestimated. I didn’t fully get it until one day after lunch, having coffee and a discussion with a Greek research assistant and an Italian postdoc (RIKEN, as I mentioned, is an international lab, whose population is about 20% foreigners). The Greek man was under the impression that the US was a dangerous place, filled with gun-toting crazies around every corner because nobody knew how to relate to people of different backgrounds, but the Italian put it all in perspective for me: “No, no, no. When I teach classes in America, there are no less than four different ethnic groups represented in my class. Indian, Chinese, Caucasian, Latino… they are all there. Working together, learning together. I would never think twice to see a Chinese woman as the head of a big company in America, but in Italy? That would NEVER happen.”

I came to Japan to immerse myself in the culture, develop my language skills, and eat as many noodles as humanly possible – but I come away now with a new awareness of this country that was tightly shut to foreign influence for the majority of its history, a country that is mostly racially homogeneous – and a new respect for the colorful foundation that America stands on. Because while homogeneity is useful when looking for your blonde non-Japanese-speaking friend who’s 6’3″ at Japan’s busiest subway station, it’s also a major difference between my home country and my current one, and it’s helped me to realize that our country of racial diversity is a minority in a world full of divided people. And when you realize that there are so many other people in the world who go about their daily lives in just slightly different ways, ways that actually represent a deeper, greater difference in the way they think about everything – that completely changes the way you see the big picture.

I’ve done a good bit of traveling around Japan – hopped on stones over the pond at Heianjingu garden in Kyoto as dark koi circled my feet, played with the tame deer at the base of the world’s largest indoor Buddha in Nara, walked around Japan’s biggest rock garden at Koya-san, watched a ninja fight reenactment at Nikko, climbed one of Mt. Fuji’s hardest trails during one of the worst nights of the season to the top, experienced a transgender hostess club, enjoyed my host family’s Japanese dinner party in a yukata (their parting gift to me), and indeed – ate many, many noodles. And these are all things I could not have experienced if I had sat on my butt all summer at MIT (except for eating noodles, but that would’ve required a lot more Top Ramen than would have been enjoyable).

People back home often ask me how I’m doing spending three months away from all my friends and family, in a foreign country where I only somewhat speak the language, in a culture so far removed from the American one to which I’ve grown accustomed. Everyone wants to know what Japan is like, and I always tell them, “Japan is weird.” And it is a totally, completely, utterly weird place. You can take a train to a synthetic island off the coast of Tokyo to see a five-story Gundam that moves and blinks its eyes, and then go get your ears cleaned by a girl in a maid costume. But there’s also so much beauty in all this weirdness, and recognizing that it comes from a long history that makes the US look like a toddler of a country. Now, I’m finally starting to understand how all this comes together to create a country packed with people who think a woman is more beautiful if her skin is pale, and that it’s tasty to put fish eggs and rice cakes on a pizza.

These are just some of the many weird things I’ve learned to experience and love during my summer in Tokyo! 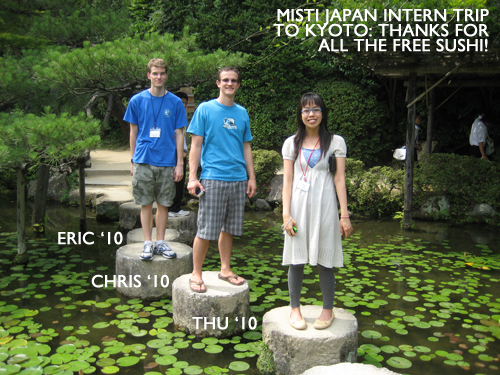 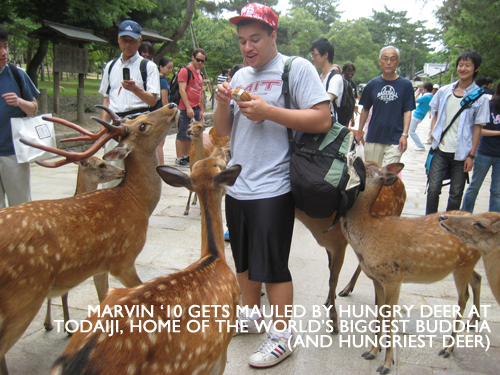 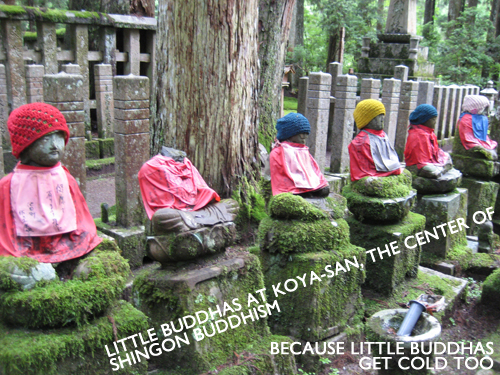 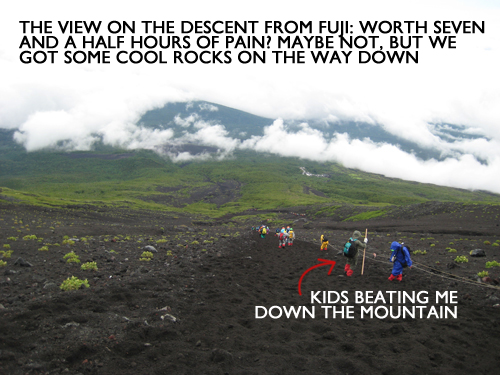 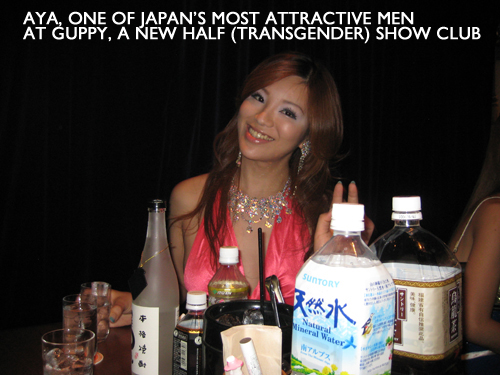 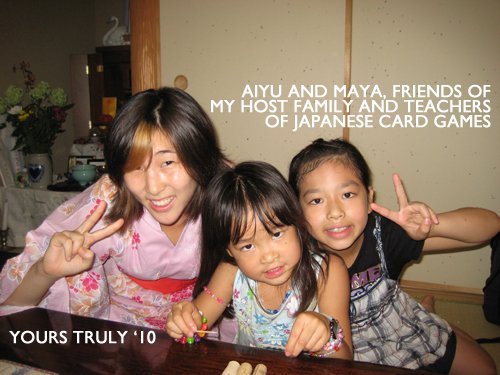 6 responses to “Appreciating America in Tokyo (or Things I Never Finished, Part Two)”