Although of course you end up becoming yourself by Joel G. '18

Perspective and focus, brought to you by M. C. Escher

I’m ranked in the bottom 39% on profile views among my connections on LinkedIn. My pageviews are down 80% from last week, when they peaked at an all-time high. I have a Basic account, but I could try Premium free for 30 days, which comes with various, non-specific benefits, and lot of street cred. Sometimes I flip through my contact list and wonder, “what kind of avatar defines me as a person?”

Spring semester was, in a word, frenetic. I loved all of my classes (or at least the idea of all of my classes), but I was so busy with psets and projects and deadlines that I never had time to appreciate and absorb the material. Some of it I’m just getting now, like Linear Algebra concepts from 18.06 that hit me at Chipotle because I was too focused on the due date to pay attention to the ideas, or A* search algorithms from 6.01 that I was too busy to internalize, even though I mechanically answered all the exam questions correctly. I felt like I lost sight of the forest for the trees, and got locked into a narrow tunnel vision in which I only valued the immediate consequences (grades and sleep, possibly in that order) and not the longer-term utility.

But then finals week came and went, and I was free. And rather than leverage my freedom to finally sleep normal hours or catch up on months of missed Reddit, I turned it towards the long queue* of adventures I missed during semester.

* it’s technically a stack, not a queue, since I pop off the most recently added item as it’s freshest in my memory. Computer Science has ruined normal English for me.

One Sunday in June, Reva ‘18 and I finally visited Walden Pond in Concord, which had been simmering in my to-do list for months. Concord was surprisingly easy to get to: it’s only an hour away via the Fitchburg commuter rail, and is also accessible by bus, although we rode the Red Line to Alewife and just took an Uber to drive us the rest of the way (Uber is wonderful. It’s the same transportational safety net my parents used to provide, but without any of the questions or judgement!). Walden is also allegedy within biking distance, but I’m far too lazy to even purchase a bike, much less use one.

Henry David Thoreau lived in a cabin on the Pond for two years while he wrote Walden, the success of which turned the Pond and its surrounding forest into a state reservation, complete with designated hiking trails, marked-off beaches, restrooms, vending machines, and lifeguards, none of which I think Thoreau would have been that thrilled about. “Pond” is actually very deceptive; Walden is over 100 feet deep and almost two miles in circumference. We saw schools of fish, lots of swimmers, and also a very large snapping turtle, which I don’t think the swimmers noticed. 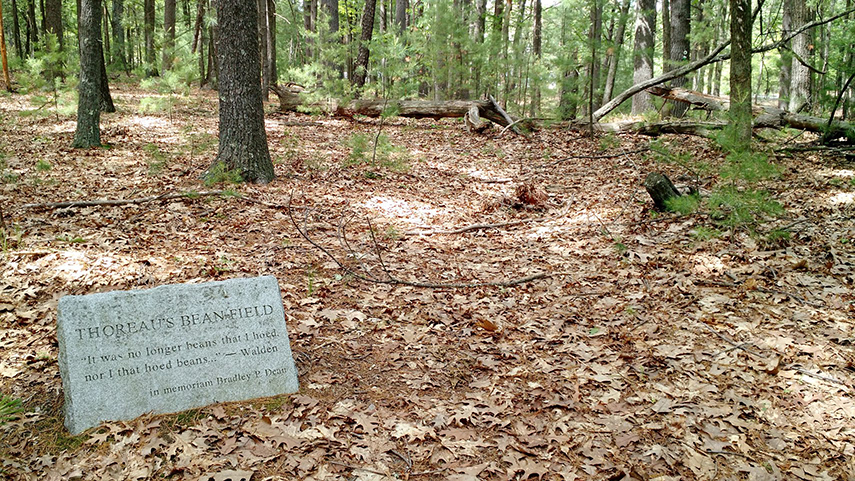 I’ve no idea what this quote means, or why it was important enough to engrave in a stone slab, but it’s hilarious.

Then in early July, four friends and I drove to Mt. Monadnock in New Hampshire, which somehow has its own Facebook page, despite being a geological formation incapable of sentient thought. We spent the day hiking to the summit, then stayed overnight at a campground, complete with a campfire, s’mores, ghost stories, and a general feeling of rugged satisfaction. 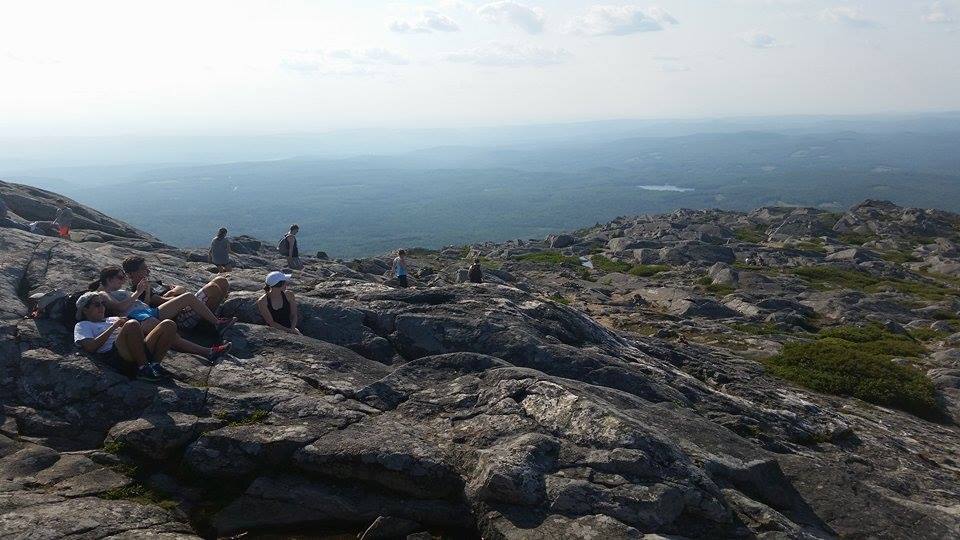 Later in July, I finally visited the Boston Arboretum, attended my first Red Sox game, and rented a kayak to paddle up the Charles River to Harvard and back. I also got back into tennis, and started playing almost every day with friends or random strangers, including a wonderful man named Jeff who I met on the courts. He’s in his seventies, and is very nearly better than me. I aspire to someday be him.

I also visited MIT’s libraries with the intent to check out a book for the first time (as it turns out, they exist for reasons other than study space)! I picked up two books on the programming language Lisp, which I’d always wanted to learn, as well as Douglas Hofstadter’s 1979 monstrosity Gödel, Escher, Bach. It’s 700 pages long and three inches thick, but it’s packed with mind-bending narratives and paradoxes at the intersection of math, music, and art, and their implications to philosophy and consciousness. 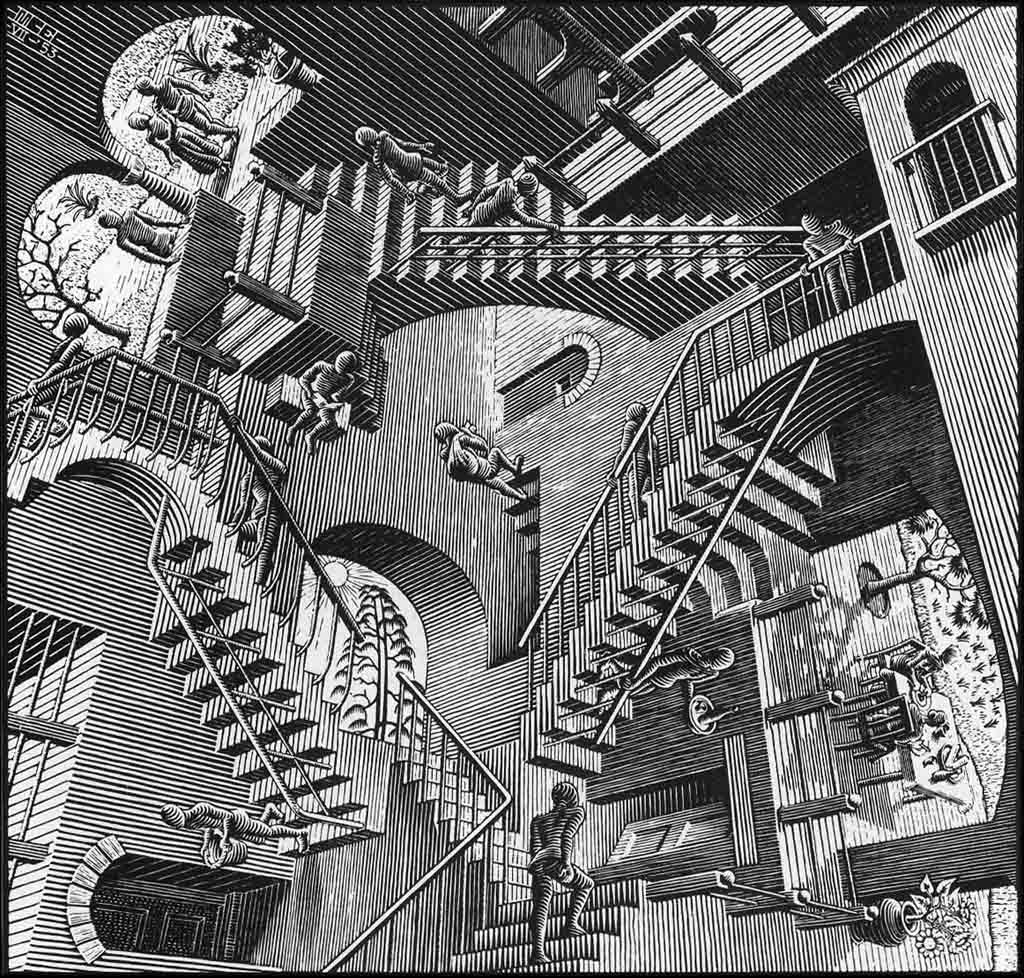 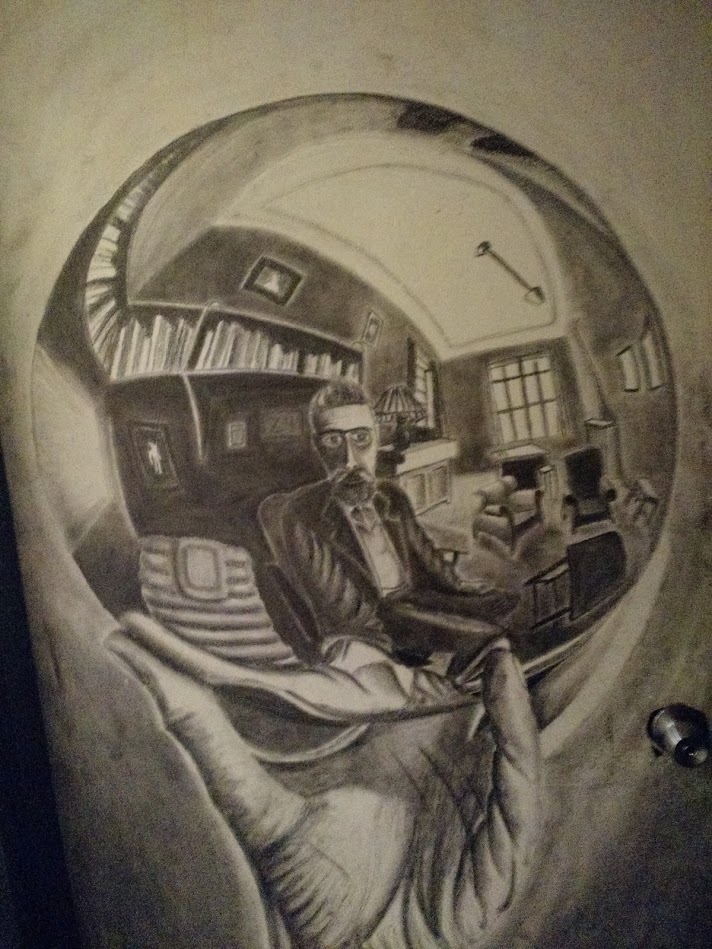 The picture on the right is actually a painting of Escher’s that’s on the door to the room in Zeta Psi that I’m staying in for the summer. Escher couldn’t just draw a normal self-portait like other artists, could he?

The Lisp textbooks were equally fascinating. Lisp is an ancient (1958!) language still in use today, particularly in AI research. It has an incredibly elegant syntax that doesn’t distinguish between code and data: Lisp programs can write other Lisp programs and execute them, or edit themselves while running (hence the AI research). I didn’t learn Lisp because it’s practical – Python and Java are far more widespread – I learned Lisp because the principles that it stresses are applicable anywhere, and I wanted to understand its model, paradigm, and general “lispiness.”

If this sounds cool to you, read a Lisp textbook. You won’t regret it.

But what does this have to do with LinkedIn and Fight Club references?

I’ll put it this way: when I look back on Summer 2015, I’ll think about the snapping turtle at Walden, the peak of Monadnock, dizzying Escher prints, and heavenly revelation that was Lisp macros.

But when anyone asks me what I’m doing this summer, I tell them something else entirely: “I’m working in the MIT Media Lab.”

Although my UROP in the Media Lab was insanely fun, and I learned a tons of practical development skills through rote repetition, what I liked most about my job was its flexibility. I didn’t want my summer to be a repeat of spring semester, chained to a computer, churning through JavaScript for just a facet of a project. Instead, I vowed to ditch the rigid 9-5 paradigm and really explore things I was personally interested in, like Lisp or tennis or the life and works of Theodor Nelson. So in spite of working 40 (admittedly scattered and noncontiguous) hours a week, I managed to learn about myself, and came away with a clarity of focus that I lacked when I stumbled out of a hectic spring semester.

One of my friends, Colin ‘16, took this philosophy to its extreme, rejecting an offer at Apple (!!!) and choosing to spend his entire summer pursuing his own interests. He delivered a long rant about his philosophy, which I condensed here below:

It came down to a fairly simply tradeoff. On one hand, it’s important to build legitimacy, usually by taking the most prestigious–sounding job you can. On the other hand, there’s learning and skill building. In my experience, internships are a very inefficient way to actually gain skills. But working for a company necessarily comes with a set of constraints on your time, and, burdened by these constraints, it is almost inevitable that you will spend some subset of your time doing things you don’t want to do, like learning some obscure programming library, writing unit tests, or other activities that have no intellectual or recreational merit.

Consider the alternative. You can learn the skills you want to learn, read books you want to read, and builds the projects you want to build. You can frolic happily in the intellectual playland of Wikipedia. You can go on adventures, take on a new hobby, and make new friends, unconstrained a monolithic 9-5 black hole in the middle of everyday. Every social norm, unquestioned convention, and arbitrary definitions of success go out the window when you realize that you have 24 hours every day for the next three months that you can allocate entirely as you wish.

Colin’s strategy isn’t for everyone, especially people who want to make money immediately or people who know for sure what they want to pursue, but it let him study dozens of research papers (he aims for one every day), books, languages (we tackled Lisp together), and personal projects (he’s finished two and is launching a Kickstarter campaign soon). He doesn’t regret his choice.

It’s easy to go on LinkedIn and feel bad about not pursuing the prestige. It’s easy to imagine relatives’ reactions if you could tell them you’re working at <famous tech company> instead of explaining what a “UROP” is, or (even worse!) telling them you’re unemployed. Internships, career building, JavaScript are certainly important (and also earning money, which Colin does not yet), but they aren’t the only possible source of value. You don’t have to be doing something that sounds cool to be cool, and sometimes taking time off to chase your own interests is worth more in the long run than blindly grasping for the next rung of the ladder without knowing where you’re climbing toward.

Now if you’ll excuse me, I need to go tour Europe for two weeks before semester begins again.