So I'm in this serious long-term relationship.

It is four days into IAP and I have yet to sleep in my own bed. In fact, today was the first time I’ve been back in my dorm for more than half an hour since returning to MIT on Sunday, and I was only home for about an hour before leaving once again. It has been so long since I’ve really been home that I’m on the verge of emailing housing and telling them to cancel my room at Burton 1, since I’m not home day or night, and my room has started to smell faintly of mildew, and old people. And all of this because I’m committed to this long-term, very serious relationship – with MIT-EMS.

MIT-EMS (Emergency Medical Service) is a student-run volunteer ambulance service that provides basic life support to the MIT campus in Cambridge, as well as part of Boston, and runs 24/7 – which means a large number of greatly desired overnight shifts, many of which I have been taking lately because it’s IAP and THAT means FREE TIME (what IS that?? is that even REAL??). All of our student EMTs are certified in the state of Massachusetts, many via the class which is offered every IAP, from 9 AM to 5:30 PM four days a week (which I took last year). This means any free hours we have during shift are spent helping the new class get CPR certified, or learn to take blood pressures, or not pass out from eight grueling hours of training. 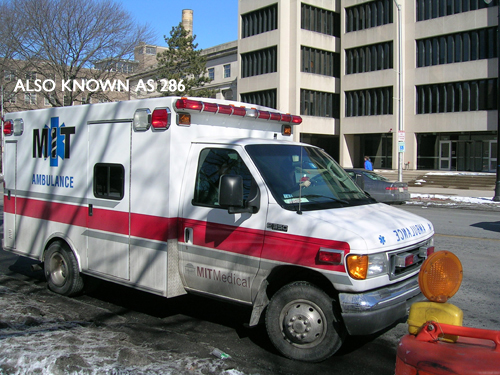 We’re required to work at least 49 hours a semester, but if you want to be really good at your job you can’t just take one shift (which are either four, seven, or nine hours long) every so often – you need to work consistently, and many people on the service work 100-200+ hours a semester (which may seem like a lot, but it’s over the span of three months). IAP is optional, but I’m trying to gain experience by working as much as possible, especially before the new class starts working too. 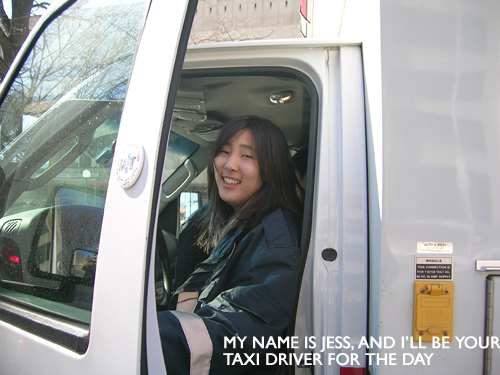 (I have to just say that that’s probably one of the worst pictures of me taken, ever. It wasn’t even like I’d had my wisdom teeth out or anything, I just NATURALLY look like a chipmunk preparing for a very grueling natural disaster. Anyway.) Our service is funded and supported by MIT Medical, which provides complete health services for the MIT community from the gynecology ward to the pharmacy to 24/7 urgent care, though we take most emergent patients to the surrounding hospitals in Boston or Cambridge. We also work as standbys at sporting events or concerts – last spring I got in free at the Angels and Airwaves concert (which actually turned out to be a very bad mistake, because Tom Delonge should really just have given up at music by now). 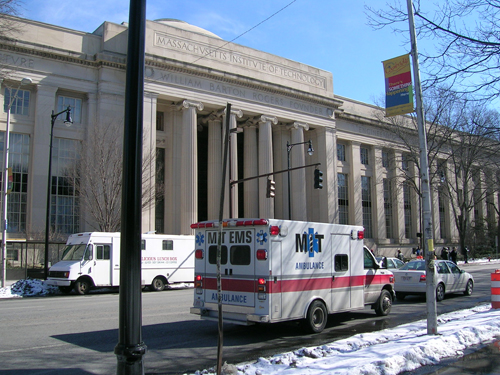 Angela (not The Angela Monster)(I think) asked: it’s cool that you ride with the ambulance. I’m interested in joining too (provided that I’ll actually get it). What is it like?
It’s awesome. Come and try it for yourself.

The service itself is a really cool thing – not only is it entirely run by unpaid students, but we’re probably the only service that runs its own ambulance itself in the New England area. And (here comes the cheesy – are you ready? I don’t think you are!) we do legitimately make a difference – our response times are significantly shorter than that of outside ambulances, since we’re students here and we know our way around the buildings; we’re also located right on campus rather than much farther away up on Mass Ave. We have a bunkroom where we can sleep, watch TV, check email on the Athena machine, use the restroom, and pretty much exist right in the basement of Stata. It’s a pretty sweet setup.

Just because you’re saving lives, though, doesn’t mean you have to give up your own. Here are the other things I have done three days into IAP:
1. On a whim, added French 1 (comment allez-vous?)
2. Bought enough groceries for a small vegetarian family
3. Snowboarding class (for credit!)
4. Breakdancing class (alright, not for credit)
5. Helped teach CPR at the IAP EMT class (which I took last year)
6. Finished rereading The Subtle Knife
7. Got a UROP (more on this later… dun dun dun)
8. Lost (by ONE CARD) at a highly competitive game of Cranium, freshmen vs. upperclassmen

In three days! Not bad, hm? So I haven’t been home for the past couple of days for a few reasons, but at least I’m still blogging. And according to Gawker and the New York Times, that’s a more noble feat than riding an ambulance anyways.