An Evening With BJ Novak, opened by Barack Obama by Jess K. '10

[Apologies that this entry is so delayed. I’ve been walking around like a turtle in three pairs of sweatpants and two sweatshirts and a lot of sweat trying to get over this ridiculous cold-flu-thing – let’s just say that trying to will my body back to homeostasis topped off with a 11-page story, two midterms and starting a new UROP hasn’t left a whole lot of time for blagging. Good thing they got Sniv to cover it as well. But I’m here now! ]

There are some times in your MIT career when you’re tired and struggling to keep your eyes open and your focus on this pset and wondering when exactly it was the last time you got to go outside, and you lose perspective. (Oh, calm down. It’s not all that bad. I was outside just last week!) You forget, most of the time, that you’re a student at one of the top engineering schools in the country, or that the guy on the other side of the wall is developing an indoor autonomous quad-rotor helicopter that can be used for search-and-rescue missions, and maybe someday, finding the remote from that deep crevasse between couch cushions without you having to get up. You forget that this is an institute of world-class research because it’s also the place where you live and play and work and buy enchiladas from Jose’s Food Truck.

And then there are other days when you can’t help but be reminded, like when Obama came to MIT a few Fridays ago.

It all happened so suddenly. I’ve heard that MIT didn’t even know he was coming until the weekend before, but all I know is I received nine separate emails between 6:09 PM and 7:46 PM on Tuesday evening about Obama visiting MIT on Friday morning (mostly punctuated with multiple exclamation marks, and one misspelling of “Obama” as “yomama”)(that last one might have been me. Please don’t tell Barack). President Obama is the second standing president to ever visit MIT, after Clinton’s commencement speech in 1998. He is also, in case you have been kidnapped some time in the last two years and are unaware of the current state of American politics, the first black president of the United States. (If you are, in fact, kidnapped, and this was the first thing you decided to read instead of sending a distress email, I’m certainly honored, but please do contact your parents at some point. I’ll wait.)

So it was certainly an overwhelming feeling to think that we were here, as MIT students, about to witness this tremendously historic event. The second standing president to visit MIT, the first African American president of the United States, was about to give an address on the state of renewable energy on the same stage that I have personally slid, belly-first, across. Matt McGann and I hosted the 2009 CPW variety show and talked about the time I bought a Logs serenade for my boyfriend on that stage. And the night after, BJ Novak was going to be up there, on THAT VERY STAGE, doing standup with a hand puppet.

(What can we say? Kresge gets around.)

One of these emails I got in that nine email blast was an email from Vice President for Institute Affairs, Kirk D. Kolenbrander, assuring us that “the tickets MIT has for the event will be allocated in such a way as to be broadly representative of the Institute–and weighted to favor students”. This was greatly exciting news, and we all went to sleep that night with visions of Obama speaking to an auditorium full of hackers and Sloanies. Except the next morning it came out that there would only actually be 50 student tickets, and so it was truly an honor to get the opportunity to see him speak.

The talk was slated to start at around 12-12:30, so naturally they asked us to get there at 10. (I guess when you’re the president, you get to ask people to take several hours out of their incredibly valuable time at the Massachu- okay, I probably would have been sleeping, but still, two and a half hours??) Nina ’10 (one of the few other MIT students I knew with the privilege to see Obama speak) and I ended up getting there at around 9:30, and already the line was pretty much packed. 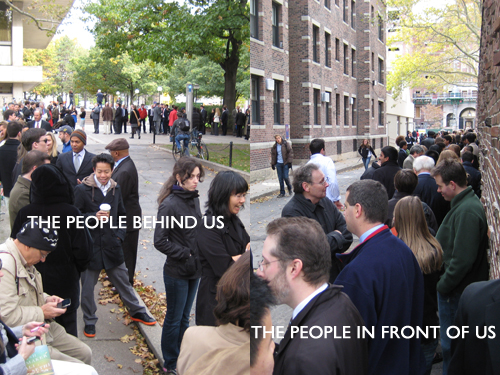 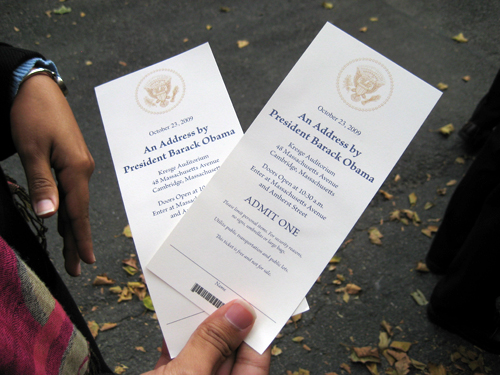 Standing in line that day was so crazy to me because I’d personally tramped all over these grounds for the past three years, not giving a second thought to slopping my feet down all over the grass and ruining countless pairs of shoes in the constantly muddy patch of grass in front of Kresge, but on this day, the entire path around Kresge was blocked. It was like President Obama had come down and blessed the ground itself, and for that reason they needed ropes, gates, and a handful of Secret Service agents making sure nobody tried to sneak in and streak across the field or anything. (Not that we do that.) 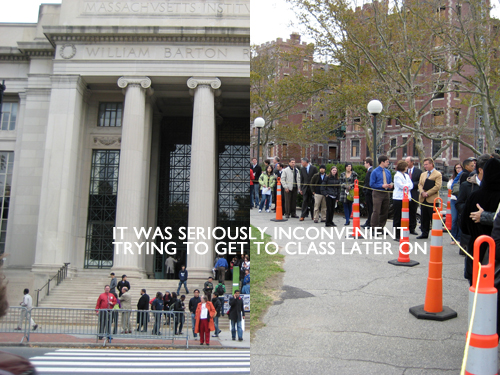 So Nina ’10 and I get inside – mind you, we were probably about 40 people from the front – when some lady comes up to us and asks, “Are you MIT students?”
“Yes?” I respond, unsure if she’s trying to figure out what smells so bad.
“Come with me,” she says, leading us around to the middle section. To a block of seats marked “reserved”. 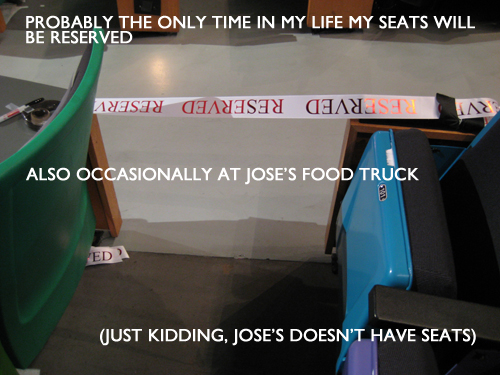 “Is it really okay? Isn’t Susan Hockfield or someone sitting here?”
“Go for it; they’re for you.”
Nina and I settle into our seats two rows from the front, directly in the center, right in the line of fire if President Obama were to spit or something, and I begin to hyperventilate a little bit. A lot bit. 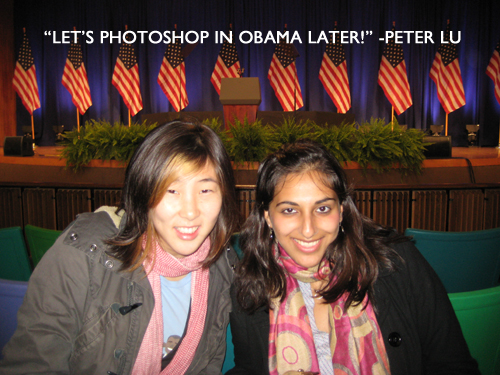 After Nina finds me a paper bag to breathe in, I take a look around and realize 1) that we have literally the best seats that you can get without being a professor, better than the members of the UA, better than Jason Scott, Class of 2010 president and better than Nina’s dad’s seat, as the Dean of Engineering and 2) that they really aren’t optimizing the space as well as they could be. A few rows behind us, the center section is entirely blocked off for press: 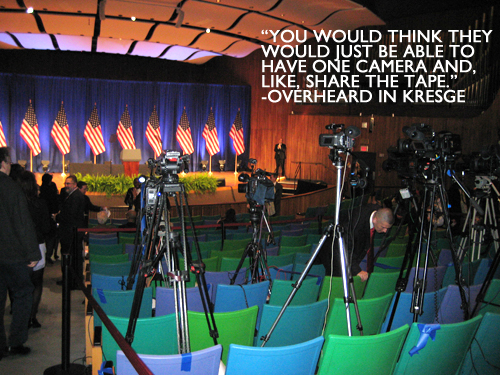 To my left are some pretty important people: Peter Lu ’11, and an MIT alum my mother is very thankful for: 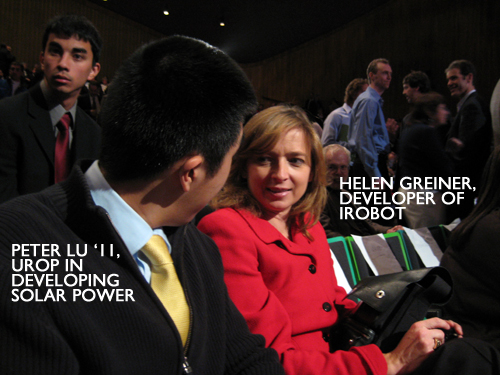 (What can I say? The Kim family really loves their Roomba.) And in front of me, freshman chemistry professor and minor MIT celebrity for bringing in a glass of champagne and toasting the class at his final lecture of every fall semester: 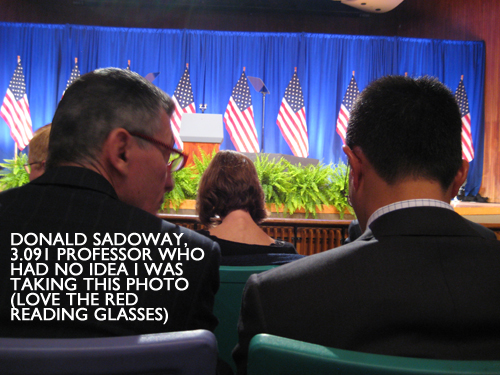 After a little while, people started to get restless. Being locked in an auditorium with all the famousness and cameras and glory surrounding this event were beginning to get a little monotonous, and so they lowered all the patriotic orchestral music blaring through Kresge’s speakers and sent out Cecilia Louis ’10, a member of the Chorallaries with an amazing voice, to sing the national anthem. It was awe-inspiring, really; so much so that the entire auditorium collectively had no idea what to do afterwards. 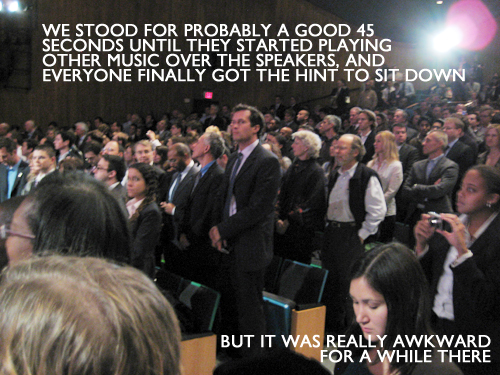 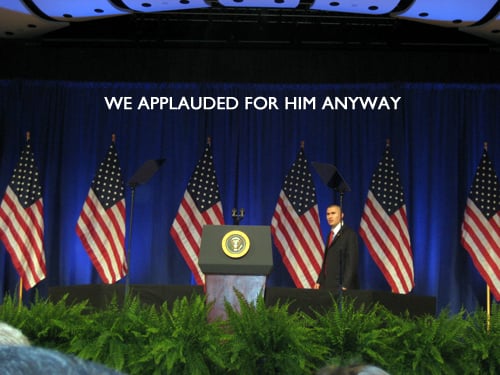 Another brief moment of panic (and a quick text message to my mom) when Deval Patrick and John Kerry decided to show up: 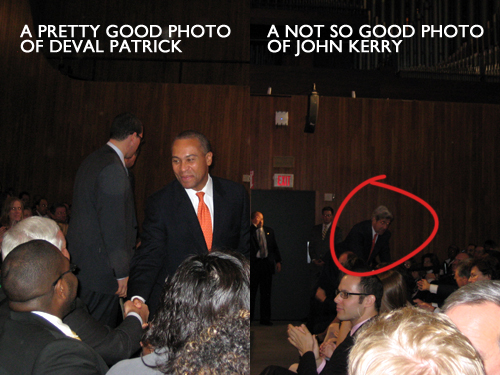 Have you ever seen the standing president of the United States in person? Yes? No? Have you ever seen someone with such celebrity status that it makes you want to eat your own hand, a little? (I’ll accept Lady Gaga.*) That is kind of what it is like to see the president in person.

“Ladies and gentlemen, the president!…” 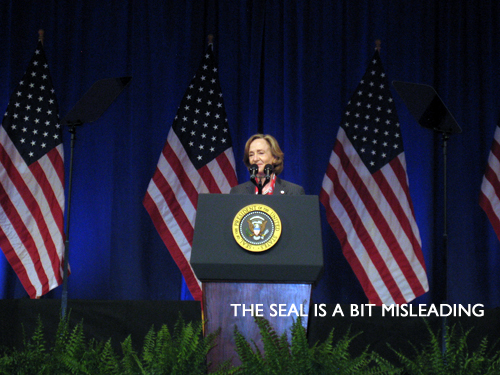 Let’s try this again, shall we?

“Ladies and gentlemen, the president of the United States!” 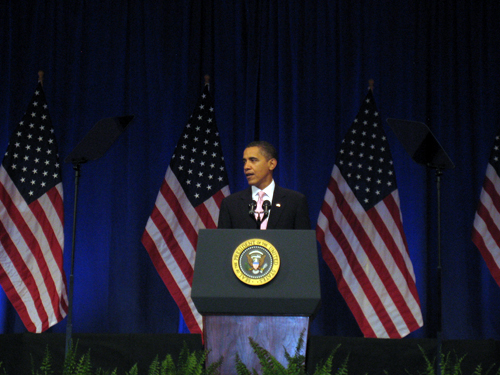 “Thank you, MIT… I am hugely honored to be here. It’s always been a dream of mine to visit the most prestigious school in Cambridge, Massachusetts.” Obama began. Cheers.
“Hold on a second. Certainly the most prestigious school in this part of Cambridge, anyway.”
“I’ll probably be here for a while; I understand a bunch of engineering students put my motorcade on top of building 10.”

Oh, President Obama, you and your pink tie had me at “motorcade”. 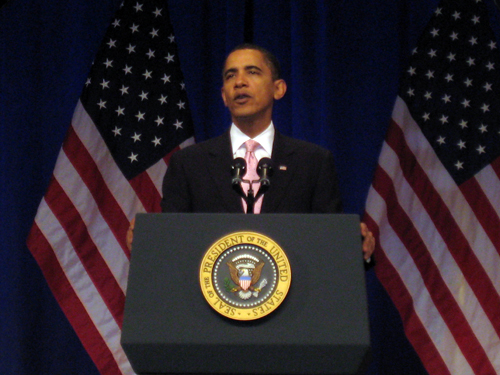 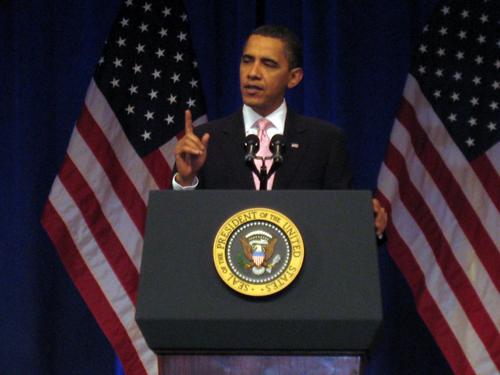 And then he spoke, and I stopped taking pictures for a little bit. In all honesty, the speech wasn’t that.. earth shattering, although it was pretty incredible to see him in person. It was fantastic that he acknowledged the energy initiative research happening at MIT, and I felt very moved when he talked about how continuing support for renewable energy research would be key in ensuring America leads the way in the global economy. For the most part, however, a lot of his speech was very generic in discussing how we would go about making these changes; most of the terms that he used to describe the need for clean energy were fairly non-specific.

Even still, when he stepped off the stage I felt so inspired to run home and unplug my space heater that I pretty much missed the entire part where he walked around in the crowd and shook people’s hands. Fortunately, Class of 2010 President Jason Scott didn’t: 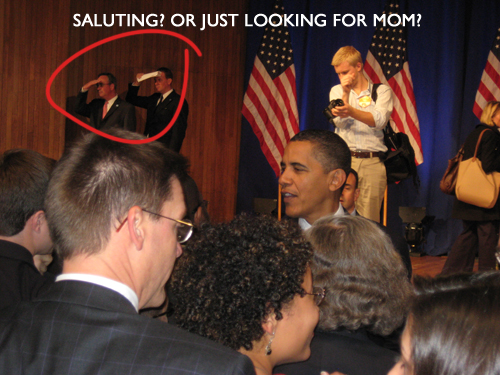 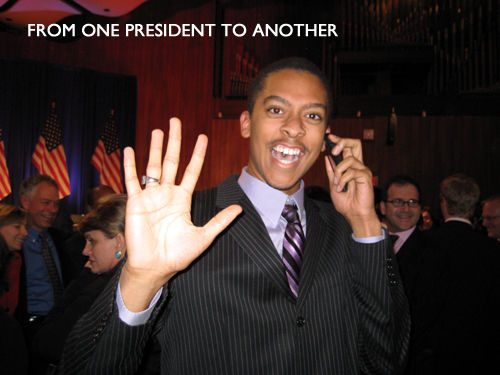 As we filed out of Kresge, I noticed that most of the field was still blocked off – and people were basically hanging from the barriers, trying to get a glimpse of the president as he ran out to his motorcade: 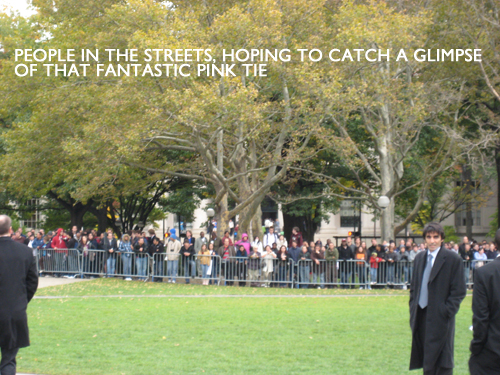 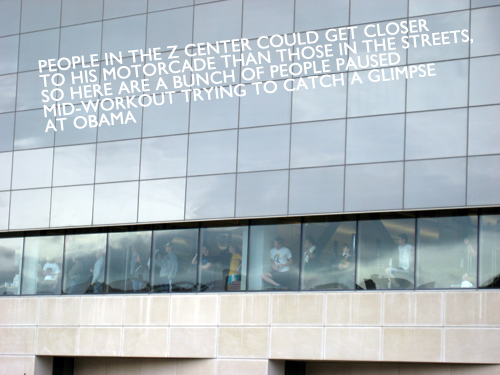 It was an incredible day, and I was truly honored to have been a part of it. I walked off to class with an extra bounce in my step and a feeling of awe, like I’d just witnessed history in the making, like I’d just experienced something that I would tell my robot grandchildren about in the year 2070. And then the next night I went back to Kresge: 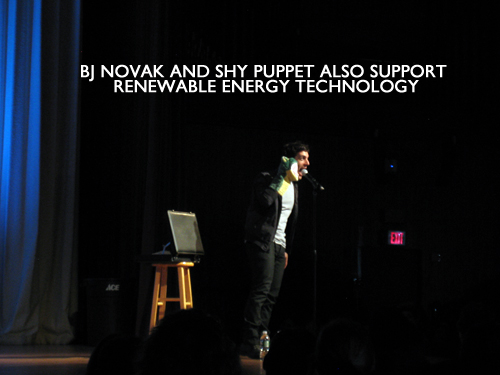 *Hey, even he admitted it. “”It is a privilege to be here tonight to open for Lady Gaga. I’ve made it.”

7 responses to “An Evening With BJ Novak, opened by Barack Obama”