On March 1st, this was posted on the MIT ’12 Facebook discussion board:

On March 5th I received an e-mail from Tamara ’12.

Hey Snively! So, you want a fun activity to blog about (since we all know a good blog is the only reason to even wake up in the morning ;) ), go to the Boston pillow fight! Apparently there’s some sort of pillow fight craziness going on in like 20 cities around the world… and it sounds like just the crazy thing you’d have fun at :)

This paragraph was followed by all of the important details, which mentioned that the pillow fight would be happening on March 22nd in Copley Square.

“Hm,” I thought, “wouldn’t it be cool if these things happened together?”

I wandered over to the Facebook group to throw the idea out there but lo’ and behold, Caroline ’11 had already suggested it and *BOOM*, the meetup was scheduled around the pillow fight. While I’m not a prefrosh, I do enjoy a good pillow fight every now and again, so I thought I’d drop by and beat on some prefrosh. Also, campus was likely to empty out during Spring Break so a pillow fight could help to pass the time. I invited Michelle ’11 to come along too since we both would be staying at MIT over the break (flights to Oregon are expensive).

March 22nd came and Michelle and I loaded up our backpacks with pillows. I brought a video camera and a digital camera as well (I’m a blogger, it’s what I do). We took the red line to Downtown Crossing and then hopped on the Orange Line to Haymarket. We popped out onto street level and looked around for prefrosh. None. We headed towards Dunkin’ Donuts for some hash browns and saw a girl with an MIT sweatshirt on.

You see, Michelle and I had this plan to pretend we were prefrosh and see how long it would take the ’12s to notice. We wandered into line and stood behind the girl in the sweatshirt. Michelle and I just stood there, casually chatting, when the girl turned around and asked “Are you Michael Snively?”

So much for pretending to be a prefrosh.

It turns out that the girl was Allison ’12 and, like us, had totally misjudged how long it would take to arrive by T, meaning we were all about 15 minutes early. As we grabbed our hash browns and coffee we headed outside to wait for some more people to arrive.

Arrive they did, and soon we had a group of 11 people gathered:

We set off for Modern Pastry, but not after I made sure we had a map, because it’s really easy to get lost in Boston. Our destination was to be Modern Pastry, which we found with relative ease (only got lost twice).

Oh! I know why we’re going the wrong direction! We’re on the wrong side of the street! 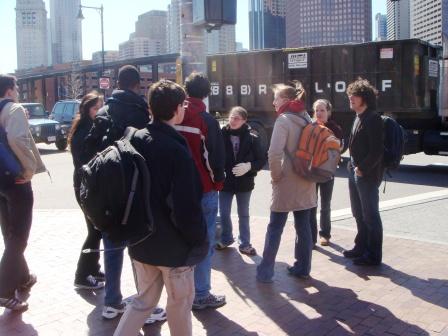 Unfortunately it was packed and there was no room for us. We decided to find somewhere else to eat, which we also found with relative ease (only got lost once). We decided on a small little convenience store which served pizza and subs next to an outdoor market.

From front to back: Bassil, Michelle, Xiaoli, Andy, Jean, Paul 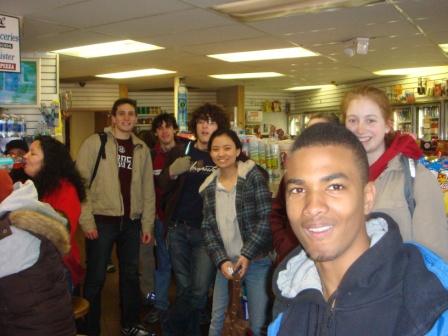 After scarfing we headed towards Copley for the pillow fight. This was also done with relative ease (lost only once) and along the way we found a truck that was giving out free Monster energy drinks. Full of food and full of caffeine we arrived at Copley an hour before the fight was scheduled to begin. We took that opportunity to chat about MIT, tell personal stories, and laugh at various people we saw walking around. 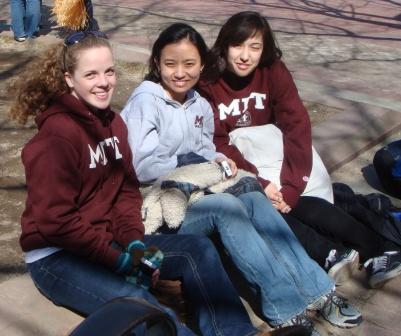 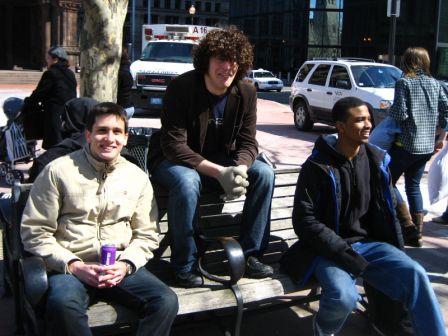 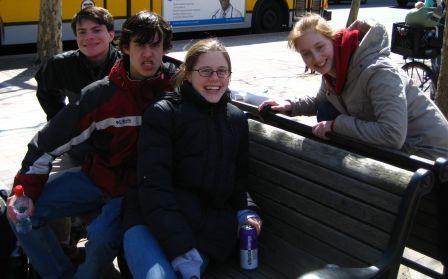 Suddenly these two random ladies with backpacks on their chests walked up.

“Hey guys! Would you like some free Vitamin Water energy drinks!?”

We all looked at our half-empty (and free) Monster energy drinks and then gaged how much more crap we could fit in our stomachs . . . .

To prove that they were doing their jobs, the girls had to take our picture while we held the energy drinks. As you can see, I’m slightly confused by the whole thing.

I’m the only new one in this picture, I’m sporting my new red hoodie 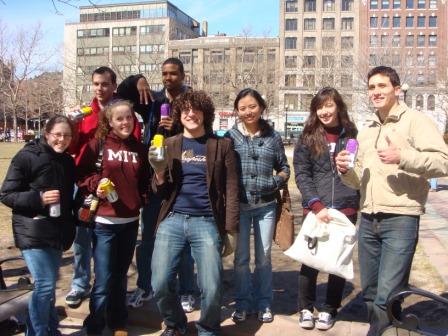 As 2 o’clock (H-hour for the pillow fight) neared we began seeing signs that massive carnage was about to take place. 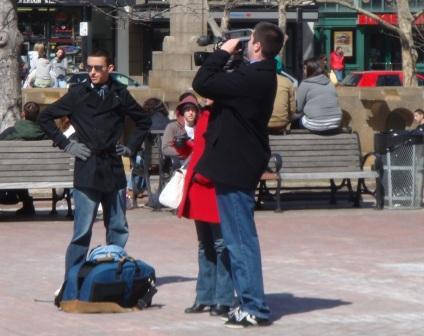 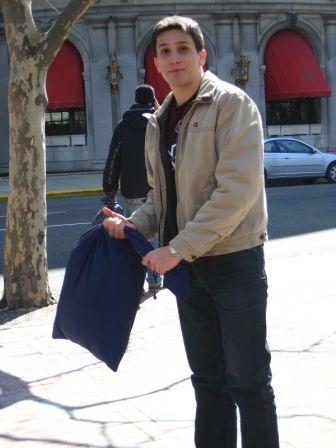 Seriously, should I be worried? 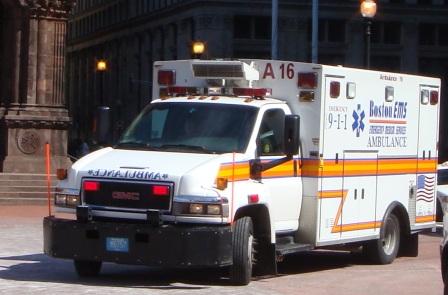 All of a sudden a masked man with a huge flag ran into the middle of the field and there was an uproar from the crowd. A siren went off and we ran like wild animals into the fray. Michelle stood back safely and caught the entire scene on film, which I have reduced to 43 seconds of mayhem

We all survived the onslaught, even getting some really solid hits in (I leveled at least one person and still have the black face paint on my pillow to prove it). For some reason though I lost my ability to breathe like a normal human being and began gasping painfully for air. No more pillow fight for me! We all left the park thoroughly pillowed out. We hopped the T back to MIT so we could explore The COOP. On the T we noticed an interesting flaw in a Harvard based ad. Can you spot the mistake?

We started losing members of our group as we got off the T and left The COOP. The remaining prefrosh were led on a super-special tour of Burton-Conner by Michelle and I (I say super-special because it makes me feel better about the fairly un-interesting tour I helped lead). After wandering the dorm a bit Michelle and I wished the pre-frosh happy travels and sent them on their way, making them promise to all come to CPW.

Thus ends the Boston Admitted Students Meetup/Pillow Fight 2008. It was a blast, I’m really glad I went. For those of you who won’t have the opportunity to go to an admitted students meetup, don’t worry. I didn’t get to go to any when I was in high school, this was actually my first. You’ll get plenty of chances to do all sorts of neat things once you’re at MIT. And so, with that, I say goodbye. It is approaching bed time and I have an exciting day of (checks calender) absolutely nothing to do tomorrow. Maybe I’ll play Worms: A Space Odyssey? Yeah, that sounds like a good idea . . .