Live from a lecture by architect Steven Holl.

Hi! I’m blogging live from a lecture by architect Steven Holl, the architect of Simmons Hall. I’ll update you on the lecture and also answer some pressing questions as the talk goes on…

I know that some of you have not heard from your host. Do not worry. I assure you that you have a host, and that you will be well taken care of while you’re at MIT.

Second, since everyone else is doing it, I guess I should tell you where I’ll be during CPW: 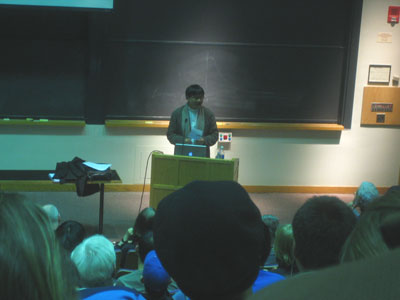 Steven Holl has begun talking, and he’s reminding me why I first thought of majoring in Course 4: Architecture at MIT (as you know, I eventually received my degree in Management Science). Famous architects like Holl get to develop grand, often crazy, ideas; he started often with his designs for completely new cities in China.

Holl has begun talking about Simmons Hall (where some of you will be staying for CPW). He showed this (in)famous slide from the master planning process for MIT’s new dorms: 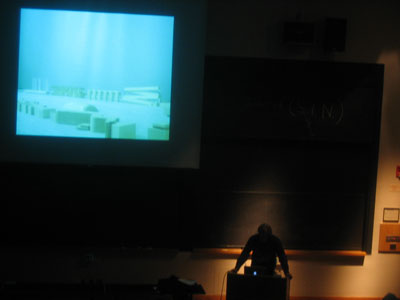 Yes, it’s quite dark in here. Anyway, in the slide above, Holl shows the 4 (!) new dorms he imagined for MIT on Vassar Street; Simmons is the second from the left. Originally, MIT tried to build the dorm on the right (the zig-zaggy one), but ran into zoning problems, among other things, but that’s a blog entry for another time. 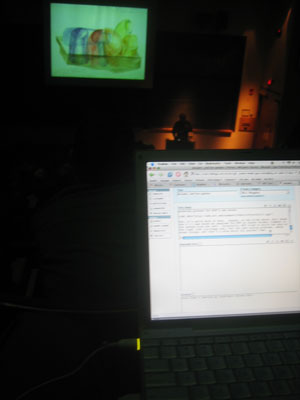 Simmons Hall, in case you don’t already know what this crazy building looks like.

Holl, in answering a question, talks about the power of “the mind and the hand.” Very MIT.

The lecture has ended. It was an interesting talk. Luckily, I believe it was recorded to be viewed on MITWorld… look for it there in a few weeks.

I’m signing off for now. See you at CPW!

4 responses to “Answers, and live updates”