Everybody enjoys a ghoul dance party!

A huge perk to living at MIT is living right across the river from Boston. 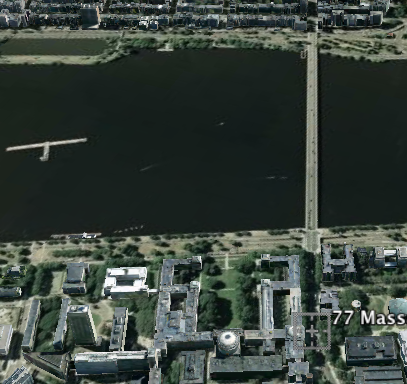 See, I’m from Salem OR, where the most exciting thing that happens is a new store opening up or a car crashing into a building every now and again. In Boston, however, since there are so many people and so many colleges, actual exciting things happen.

The concept of a flash mob wasn’t new to me, I’d seen it in an episode of CSI: Miami, but there was never anything like that near where I lived. Suddenly, thrust into Boston, the flash mob became a relevant subject in my life. I started attending city-wide pillow fights, XKCD meetups, riding the T without pants on, city-wide super soaker wars, and all sorts of other fun, spontaneous, random activities. Well, yesterday was another one of those activities.

A group called the “Banditos Misteriosos” runs flash mobs in Boston. I got an e-mail informing me that there was to be another flash mob, this time Halloween themed! Here’s the gist of it:

If years of Halloween-themed TV specials and music videos have taught us anything, it’s that come late October, monsters and ghouls love to get together and dance. Thus, it is with pride, that Banditos Misteriosos announces our very own Monster Mash-up!

Consider this a Halloween Dance Party but with all your fellow dancers dressed as ghosts! But, to give this dance another dimension, we will be your choreographers. On October 17th, we will be releasing an instructional video, complete with dance moves and your very own mentor ghost.

Costumes:
Everyone should come dressed as a ghost, bedsheet style. No white sheets, though — that is *so* last Halloween. Be creative! (and remember the eye holes!)

Dance Moves:
The instructional video will be released on our website and will teach you the dance moves that we will be doing. The choreography does not necessarily correspond to the music, but will be based on various signals. (Don’t get it? Don’t worry! It’ll make sense when you watch the video.) Learn the moves for a follow-the-leader style dance!

Music:
On Friday, Oct. 24th, we will post on our website the song file for the event. Download it onto an mp3 player and bring it under your ghost costume. At the given signal, press play and follow the leader!

Location:
TBA along with the song file. Check back on October 24th!

Without further-ado, Banditos Misteriosos presents to you our very simple instructional dance video. Merely memorize the straightforward moves and you will be all set.

Now that you got down the dance moves, it is with pride that we release our 2008 Monster Mashup!

But before we provide you with the link to the song, please read below for important announcements:

1. The extravaganza is taking place at Christopher Columbus Park. To find the exact location of where in the park we will be dancing, merely go to this map: http://tiny.cc/monstermashup

2. Don’t come wearing the sheet. At the first sound of an airhorn, put your headphones on and throw the sheet over your head. At the second blast, press play and watch for the signals to start dancing.

3. Ghosts are good at being inconspicuous, thus, when you arrive at 1:55PM, please scatter around the park, when you hear the air-horn, throw on the sheet, hit play, and run on over to the exact location given on the map.

4. Don’t listen to the song yet. It would be horror-ble if you ruined the experience by knowing the tunes beforehand. (We apologize for our over-use of terrible puns…)

5. Finally, A big shout-out to DJ JR, for all his help in creating this fun little track.

Sweet! I’ve got my mp3, my dance moves, and a location, it’s time for some ghosty flash mob dancing! I had a decision to make though, dance or film. There was no way to do both, so in the end I decided to film. It’s good because I was one of the only ones there taking video and not still photos. Yesterday morning Sara ’12 and I headed into Boston, video camera in hand, ready to watch some ghosts. We chilled in the destination location for a while before we heard a siren. Then, this is what we saw (keep in mind, I overlayed the MP3, it was completely silent there for anybody not a ghost):

*Poof!* Vanished! Another day, another flash mob. Ah the joys of living right next to a major city!