The scoop from MIT meetings in San Jose, San Francisco, and Lafayette, CA.

Great meetings this week in San Jose, San Francisco, and Lafayette/East Bay this week. Many thanks to those who attended!

The week started with a meeting in San Jose on Sunday. 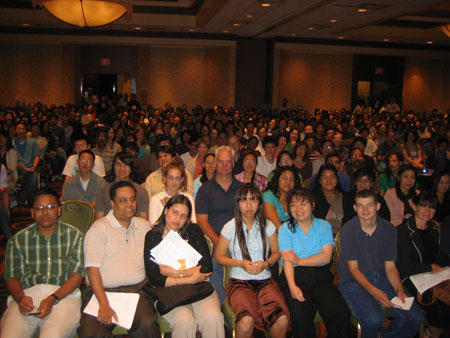 It was an exciting meeting, with over 600 people in attendance! Of our 70+ meetings that we’ll so this year, the San Jose meeting is likely to be the second or third largest. At most of our meetings, we’ll see somewhere in the 75-300 people range. These attendance numbers, like application numbers, have risen in recent years. I’m glad I have the Educational Counselors (alumni volunteers, also known as ECs) to help me out at these meetings.

After San Jose, I headed up to the city of San Francisco where I had a relatively smaller meeting, and later across the Bay Bridge to Lafayette, for another meeting that had us grabbing for and setting up extra seats to accommodate everyone.

Now, to answer a few questions I was asked at the meetings (with helpful links!):

Yes, MIT has a judo club. Apparently, It has been around for more than 40 years.

Yes, MIT has lots of resources in drama/theater, including an academic section of Theater Arts and Dance, a dozen faculty, interesting classes, co-curricular groups, extracurricular groups, and more. Plus, it’s fun to go see shows on campus (Crazy for You closed this weekend, for example).

I’m back in Boston now, so I hope to catch up on questions and other business here in the blog over the coming week, before I head to the Rocky Mountains next week. Feel free to leave pressing questions, comments on the new site/blogs, or whatever else here. It’s good to be back on campus!