Breaking out the bicycle.

Summer hath come to Boston, as demonstrated by the fact that bitter cold has been replaced by stifling heat and humidity, with the two week interim comfort of “spring” gone all too quickly.

I, however, love summer, for that’s when I break out my bicycle. 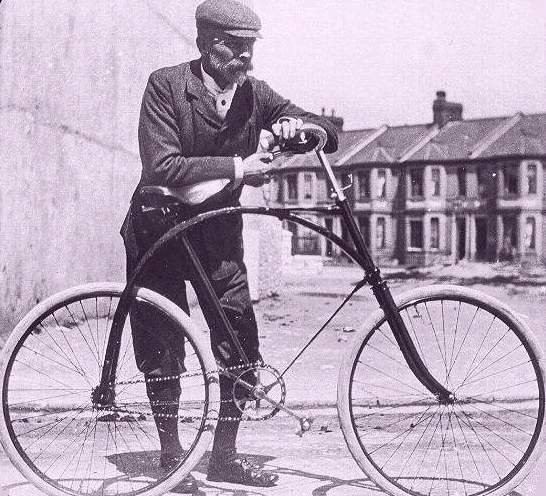 an actual photo of me with my bicycle (wikimedia)
I began commuting by bike when I was in college, taking the Norwottuck Rail Trail from my house in Belchertown to school in Amherst or to see my girlfriend in Northampton. At the time, it seemed like a nice way to get outside, get some exercise, and get to places, but I never thought I’d become committed to it. But though I hadn’t ridden regularly since I was 10 or so, and my mountain bike was far too small and rusty to boot, I quickly fell in love with biking as a means of transportation.

Once I moved to Boston I went to Wheelworks – the best bike shop in the greater Boston area by far – and picked up a nice, simple commuting bike. It set me back a few hundred dollars, but I like to think of that as just a few car payments, plus the health benefits accrued by exercise each morning. Ever since, I’ve been biking to work every day that it is reasonably safe to do so, meaning any day during which the rain hasn’t rain flooded the banks of the Charles (along which I bike) or which it isn’t so cold that I could slip up on hidden snow or ice.

Commuting via bicycle has several benefits, especially in a city like Boston. For one thing, it’s great exercise: I bike about 8 miles each way, which gives me about 35-40 minutes of a workout in the morning and afternoon. I arrive at work feeling refreshed and without the jumpiness associated with too little exercise. It’s a timesaver, too, since my morning workout is wrapped up within my morning commute.

Biking is also usually faster than any other form of transportation. The route to MIT from where I live in the suburbs has poor access to public transit and the roads are clogged worse than Elvis’ arteries. During rush hour, door-to-door via car is usually around 45 minutes; via bus, more like 60. Unless I hit all the wrong lights or get a flat, I can speed past all of them on my bike.

Needless to say, it’s also greener – assuming the increased calorie intake is offset – and much, much less expensive. And as long as I shower at the Z Center before heading in to work, I’m not even stinkier!

Now, I know what you might be thinking: biking in a city? Why is this deeply psychotic and apparently suicidal man reading my college applications?

There’s a smart way to bike, and a dumb way to bike. I bike very carefully, and almost entirely along bike trails that are off-the-road and devoted to cyclists. There are great regional bike maps – not to mention Google Maps Biking layer – that can tell you which roads are safe, which roads are unsafe, and the varying degrees in between. I always recommend driving (or walking, or busing) a route before bicycling it, because sometimes routes can be deceptive.

For example, Massachusetts Avenue, which bisects the MIT campus, ostensibly has bicycle lanes on either side down its entire length; however, the placement of these lanes, sandwiched as they are between the main road and the side parking, makes them somewhat less safe than biking on the shoulder On the other hand, much of Vassar St (another road which bisects campus) has off-the-road bike paths newly installed in the last few years.

If you’re not a policy wonk, you may have missed Transportation Secretary Ray Lahood’s new policy, which states that “walking and biking should not be an afterthought in roadway design” and will require states and municipalities competing for federal highway funds to include “equal access” for pedestrians and bicyclists. Translation: when roads get fixed in the future, they will be required to add safe, accessible bike lanes to facilitate commuting. So biking will only get better!

I also love the bicycling culture. The bike shops in the area – especially Wheelworks – are all staffed by incredible people who are always happy to show you how to fix something or just hang out. The rear rack on my bike broke the other day, and I went down to Wheelworks and hung out for 45 minutes, borrowing tools and little bolts and getting my hands greasy on their shop floor.

There are also some incredible opportunities for social improvement / justice through bicycling. You can get involved with Bikes Not Bombs, a nonprofit in the Jamaica Plain neighborhood of Boston of that works with disadvantaged youth in violent areas, both locally and internationally. BNB runs a bike shop and teaches kids how to fix bikes so they have something constructive to do rather than getting in to trouble. In the last 25 years they’ve sent over 25,000 bikes to Ghana, Tanzania, Guatamala, New Orleans, and elsewhere.

If you’re on the West Coast, you may have heard of the Scraper Bike movement in Oakland. If you haven’t, you have to watch this short, wonderful documentary. If it doesn’t change your life, it will at least change the way you think of bikes.

“In order to become a member of the Original Scraper Bike Team, you must: Be a resident of Oakland, CA. Be at least 7y/o or older. Retain A 3.0 Grade Point Average (GPA), Create your own Scraper Bike…(It Has To Be Amazing, Or Else You Can’t Ride.) A single-file line when riding. After 10 rides The Scraper Bike King and his Captains will decide if your bike is up to standards and if you can follow simple guidelines. After your evaluation we will consider you a member and honor you with an Original Scraper Bike Team Shirt. Only worn when Mobbin’ Stay posted to our website for all upcoming Scraper Bike Rides…” — The Scraper Bike King
Bikes can change health, commutes, communities, and the world for the better. Come ride with us!

15 responses to “Biking in Boston”