a hiatus from writing (but not memeing)

I took a long break from blogging.

I recently started posting again,⁠01 and will be posting quite often, for a bit – enjoy! but before this week, my last post was made over one year ago on May 27, 2019.

Google tells me the length of my hiatus:

Was the duration of my hiatus intentional?⁠02 No. The world may never know.

During my hiatus, I also declared MIT’s newest major: Computation and Cognition, also known as Course 6-9.

But seriously, my hiatus was entirely unintentional.

Each week, I truly planned to get my life together enough that I could post and break the hiatus the next week. It just never happened. I periodically thought about if I would get fired⁠03 Thank you Petey and the rest of the blogfam for keeping me included throughout this hiatus; I can't express enough how much I love being part of this community. Also Petey would never fire a blogger. I think. but was too scared to ask about it.

I still have trouble processing what factors came together that just made me completely incapable of making a single post for so long. I think in general it came down to (1) being hosed and (2) wanting to avoid the perceived finality of writing.

I was trapped in a cycle of being overwhelmed by my classes, my jobs, and my personal life. Each time something got a little better, another sector of my life would suddenly demand increased attention. My mind was constantly overstuffed. I was always trying to process too many bits of life at once. It’s a feeling I know many of my peers at MIT have shared at some point. I think some would call it “being hosed.” 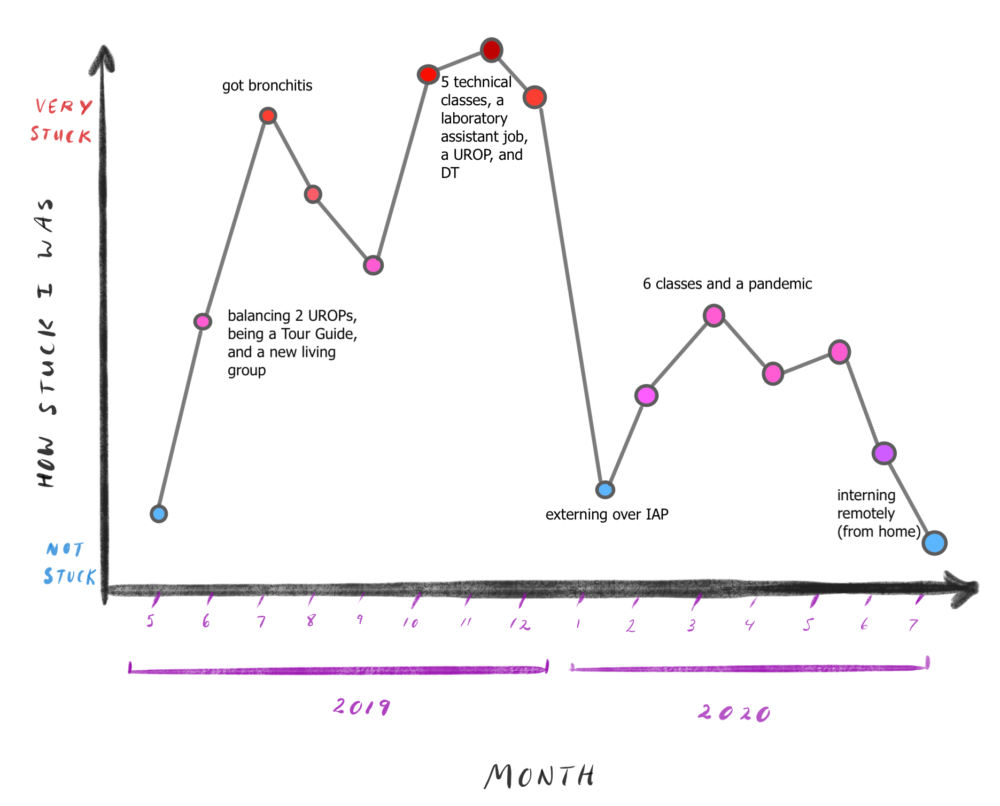 Breaking out of the cycle was a challenge because I never had the mental space to reflect on my situation. I just ran headfirst into a semester of far too many obligations⁠04 five technical classes, a lab assistant job, a urop, and two extracurricular activities, plus blogging and held on for dear life. I’d like to think if I had more time to reflect, rather than just repeatedly convince myself that “things will be better next week,” I would have made some positive changes that would have made for a more balanced semester. Or, maybe I wouldn’t have – I had my reasons,⁠05 Proving things to myself, I think silly as they were, for going into such an overloaded semester.

The cycle of being overwhelmed made me prioritize my obligations in a messy and unhealthy way. I was determined to get good grades and maintain a healthy social life, so I traded away sleep, progress on my UROP, and writing blog posts in order to attend more office hours and make more memories with friends.

It’s sad and ironic to acknowledge that I had such huge issues with balance this past year. In one of my first ever blog posts I wrote as a freshman – titled “Confusion, by the Numbers” – I stated that finding balance between school and “everything else” had become my priority. Either “finding balance” never really did become a priority for me, or I lost sight of that goal, or I lacked the perspective and tools needed to achieve it. I want to be kind to myself and say it’s the latter – despite the good intentions of freshman-fall-me, she didn’t have any idea what “balance” at MIT looked like, for her.

While I definitely did not achieve balance this year, I don’t know if balance would have been objectively better. Among the few things I did prioritize, I did pretty well. I’m guess I’m still confused.

To be clear, my life still feels overwhelming. I’m not back to blogging because everything is wonderful and I’m thriving. We’re in the midst of national and global crises, I still feel unadjusted to life at home without the freedom and friends that come with being at MIT, and the future of the college experience and our nation’s survival seems incredibly unclear. But now, unlike before, the feeling of overwhelming stress is no longer constant or mind-numbing. I attribute this to having more time to reflect; more time to process the never-ending barrage of obligations and news that pile onto my plate each day. I have time to breathe.

This past year was so confusing; every time I tried to reflect on it, there was no clear conclusion.

Did I enjoy my summer? I’m not sure – I spent over a month dealing with bronchitis. Was my UROP successful? I’m not sure – I had fun, and learned a lot, but didn’t publish. Do I want to pursue more research? The world feels too big to answer that yet. Did I enjoy living in Boston for the summer? It was awesome, but acknowledging it makes me feel bad for turning down the opportunity to live in Boston during the academic year. Was I social enough this past fall? Maybe; I made some friends, but I still don’t feel like I’m part of any one group. Did I do well in my classes? Yes, but maybe they were easy classes. Do I feel certain about my major? I’m not sure what the point of a major is. Was I social enough this past spring? Well, we got kicked out of school, I’m not sure how social I could really be.

Of course, “I’m not sure” is a valid thing to feel. Life doesn’t happen in absolutes. I’m comfortable with that fact now, but a few months ago I felt like I had to finalize my feelings before I could write about them. If they weren’t finalized, and I wrote about them, I felt like I had given those momentary feelings some finality. I didn’t want to do that.

Moreover, if my feelings weren’t finalized, and I wrote about them for the world to see, what would that mean? I felt like I had an obligation to write the truth. What if my feelings about my summer change a month after I blog about it? The thought of having outdated feelings permanently posted on the blogs freaked me out. It still does freak me out, a bit. I would like to avoid posting something one month and completely disagreeing with it the next. My fear regarding the fickleness of my feelings is perhaps what makes me lean into being a “quantified blogger” – if I use data to explain my thoughts, then they probably won’t change! But that isn’t even true.

I’m less worried about the perceived finality of writing now because I realized it’s really not that deep. So what if I post that I loved my summer, but then decide the opposite later? I can write another post, or I could just not. The vast majority of readers are human⁠06 hello, ai readers who would understand such a shift.

Depending on when you’re reading this, maybe I completely disagree with it. There’s no way for you or I to know right now! And I’m okay with that.

To conclude this post: my hiatus is over, and I’m glad to be back. To anyone else feeling stuck and scared to write: I’ve been there, and it’ll be okay.