Maybe not the best writing ever, but the pictures are awesome!

Back during my senior year of high school in 2007, I went to CPW (Campus Preview Weekend) at MIT. While at CPW I figured out which dorm I wanted to live in, that dorm being Burton-Conner. Burton-Conner has 9 different floors (Conner 2 through Conner 5, Burton 1 through Burton 5) on two different halves of the dorm. The numbers refer to the floor number. I live on Conner 2 (second floor, Conner side). Each of the floors has its own very different culture and as such, they tend to naturally separate themselves. Sure, people will go visit other floors, but the floors are all very close knit and tend to spend a lot of time with themselves.

Burton-Conner realizes this and in order to promote inter-floor relations they have something called an IFAF. IFAF stands for Inter-Floor Activity Fund. It’s a huge chunk of money that is allocated to the floors to have activities with each other. Activities include trips to Maine, apple picking, comedy shows, and other fun outings. This year we had approximately one day to figure out which IFAFs to do due to a delay in getting the budget finalized. People frantically ran around floors, sending e-mails, trying to get applications and budget proposals filled out and submitted so that we could have fun activities. We got an e-mail from Burton 4 proposing a Moonbounce IFAF that we decided to go forward with. I met with Nicole ’11, whipped out the proposal, and submitted it. One budget meeting, several weeks, and one INSANE day of trying to get all of the insurance and safety forms filled out (take note, do not try to fill out all of the forms on the last possible day), we were all set to have a Moonbounce BBQ IFAF!

The Moonbounce showed up Saturday morning, all wrapped up and deflated, and on Saturday evening I went out with James ’11 and Sara ’12 to buy food for the BBQ. 40 hamburgers, 50 hot dogs, just as many buns, condiments, soda, and 100 Solo cups later we were laden down with $165 of food and hobbled back to the dorm with all of it in our backpacks.

The next morning I met Nicole, wheeled the Moonbounce over to the grass by Kresge, plugged in the air blower, and *poof!* we had a Moonbounce! 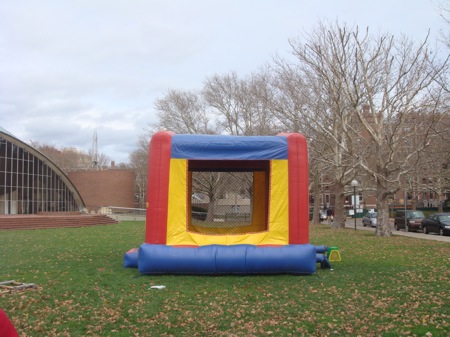 Something you should know about a Moonbounce, it inflates really quickly. 30 seconds and then we were set. We dumped some briquettes into the BBQ, poured on some lighter fluid, stacked some tables around the grill to block the wind (we got in trouble for this, whoops), and we had full blown Moonbounce BBQ.

Here’s something else you should know about a Moonbounce, you get really tired really fast! All of my past Moonbounce memories had me bouncing for hours and hours and not getting tired at all. Anybody remember Discovery Zone?

My current impression of Moonbounces may be a testament to my age, but now it involves about 15 minutes of bouncing and then coughing on the cold winter air, falling over, grasping for the wall to stop the bouncing, and almost dying.

After about 15 minutes of bouncing the crowd started to arrive and then it was BBQ time! 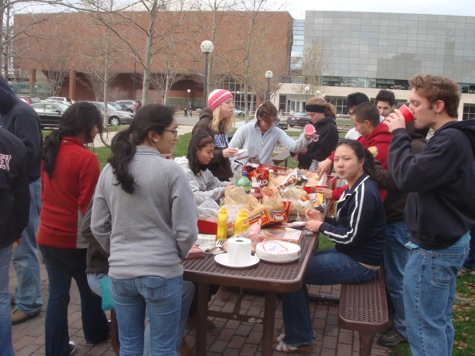 Here’s something else you should know about a Moonbounce, eating food before the bouncing can be a very dangerous experience. I ate four hamburgers and three hot dogs and decided that it was time for some more bouncing. A bunch of friends bounced with me, here’s Dan ’11 (my roommate) getting ready for some bouncin’. 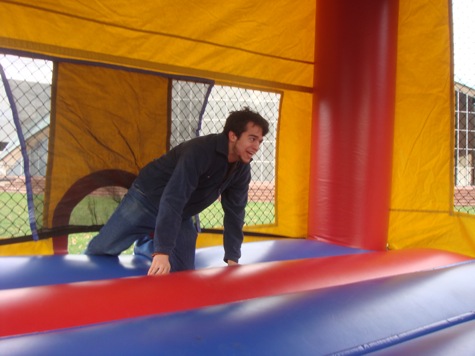 I guess the positive aspect of bouncing on a full stomach is that it compacts all of your food down into your small intestine. Maybe that’s not good? Idk, w/e. This is very well what you could end up looking like if you bounce on a full stomach. 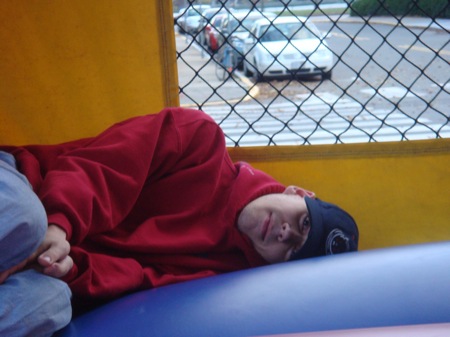 After the BBQ and bouncing a lot of the people left, but a bunch of people from Conner 2 stayed around and bounced for several more hours. In total I think I bounced about 4 hours outside. While bouncing we decided to invent some games to play, the first being the Rolling Game.

Rules: Roll at each other. Whoever rolls over the top wins.

Game 2: Spin!
Rules: Spin really fast in a circle and try to hold on.

Game 3: Extreme Spin!
Rules: Spin just like in Spin! except one person tries to go airborne and be spun by the other person.

As time wore on we got more and more tired, eventually just sitting inside the Moonbounce and relaxing. 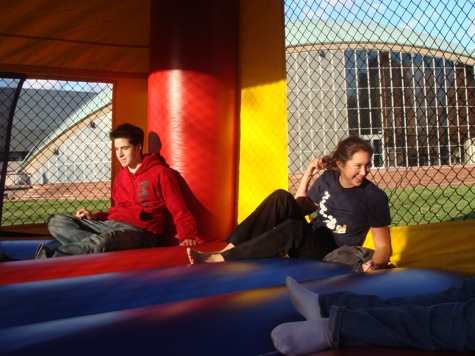 We found a roll of toilet paper and started playing around with that, quickly discovering that the wind held the toilet paper up against the netting. We took the opportunity to spell a little something that we hope gets put on the http://mit.edu homepage (come on, do it!) 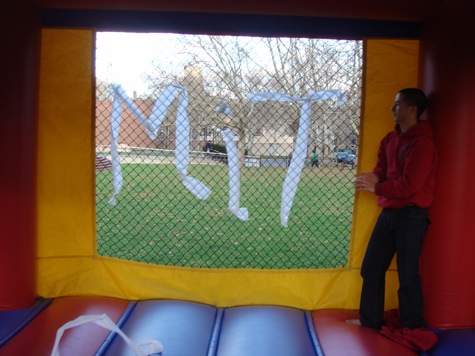 After relaxing in the Moonbounce it was time to deflate it, fold it up, and take it back to the dorm. James ’11 was inside when we deflated it but managed to escape. 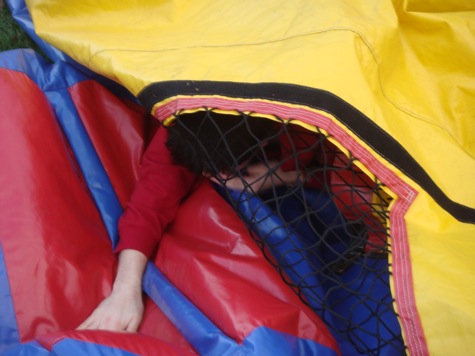 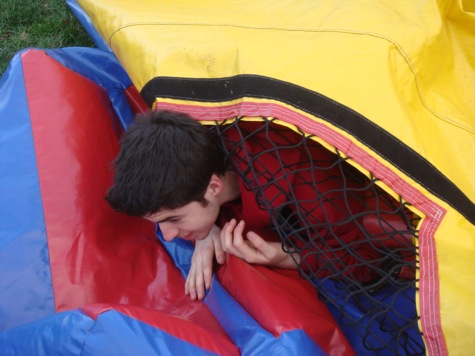 This is when things get awesome. Sometime during the day somebody made a joke about it being cold and that we should just bounce inside.

Right then, right there, it was decided that at midnight we would take the Moonbounce over to campus and inflate it in Lobby 7. For those of you who don’t know, Lobby 7 is the main lobby at MIT, the one with the giant domed ceiling, columns, and steps in front. It’s also MIT’s physical address, 77 Mass Ave.

We also decided that our midnight adventure should be semi-formal, gotta keep it classy. The only exception to the semi-formal rule was jumpsuits (because obviously jumpsuits are ideal for jumping) so if you had one you could wear that instead.

Midnight came and everybody met outside the dorm in their fancy clothes. We pulled the Moonbounce down the street and I ran ahead to make sure the lobby was clear of police/janitors.

It wasn’t. The entire second floor was crawling with phys plant (slang for facilities workers) waxing the floors. There was hesitation when the Moonbounce arrived, should we move it somewhere else or just ignore phys plant and set it up in Lobby 7? James got the novel idea of asking to do it, something I hadn’t actually considered, so I ran off to find the head phys plant and ask. He was easy enough to find and, surprisingly, said it would be perfectly fine if we set up a giant inflatable castle in the middle of lobby 7, so long as we didn’t make a mess. 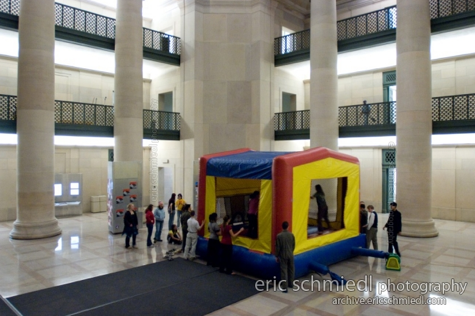 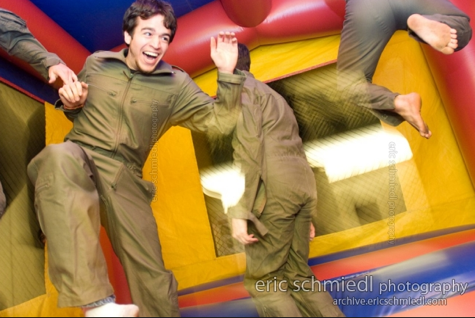 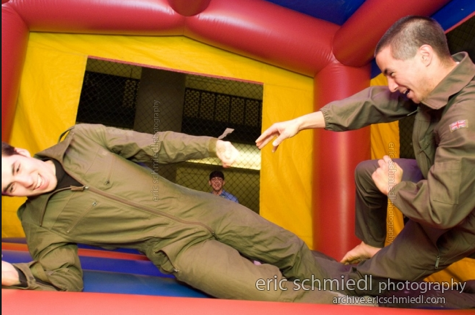 The sophomore guys on Conner 2 (Yuki, James, Dan, and me) are really tight and figured we needed a group picture or two to remember just how awesome this all was. 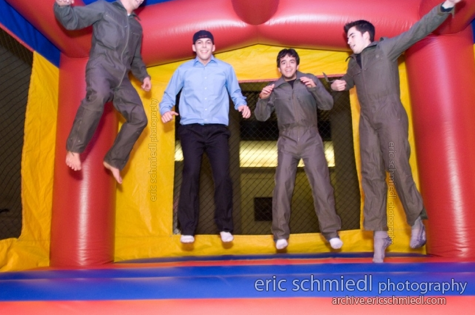 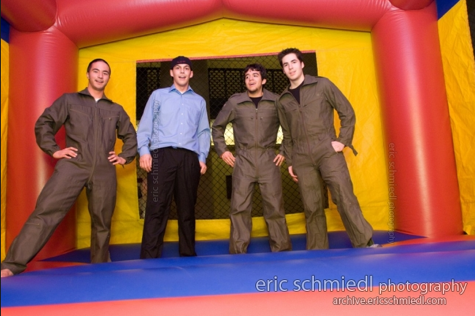 Yes, I know, I’m the only one not in a jumpsuit. I wasn’t a part of that particular outing to the garment district, sad times.

We bounced and bounced and bounced, but then something amazing happened. Something absolutely amazing. One of the head phys plant guys walked up. I kind of freaked out, I thought we were going to get kicked out of the lobby. Instead, he asked if he could bounce. *gape*

This is when all of C2, B4, and B5 started clapping and chanting, telling him to bounce. Then I looked up and realized that all of the phys plant on the second floor were chanting and clapping too.

That’s all it took, he kicked off his shoes, crawled in, and started bouncing. He bounced for about five minutes before getting tired (remember, bouncing is hard!) and crawling out, but those five minutes were near-magical. Everybody just laughed and laughed, we never expected anything like that to happen.

After about 45 minutes of bouncing we decided it was time to pack up and take off. We got some group shots first though. 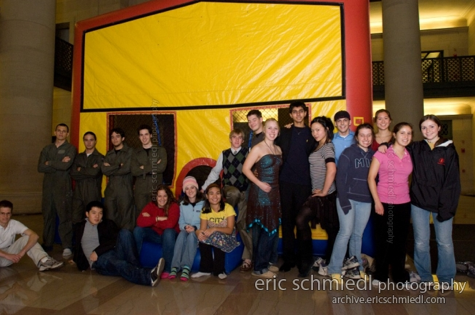 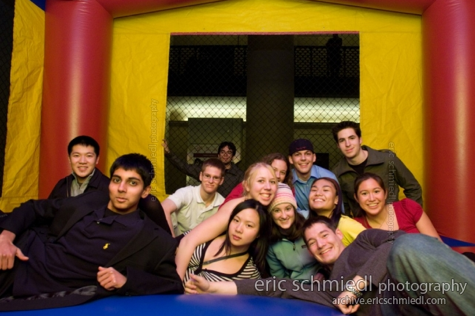 The Moonbounce deflated for the final time and, just like last time, people were inside and had to try to escape. We folded it into thirds and then pressed the air out of it. Pressing the air out of a folded up Moonbounce basically involves a bunch of people laying down on it and rolling towards one end, a game that’s actually almost more fun than the rolling game inside the Moonbounce. 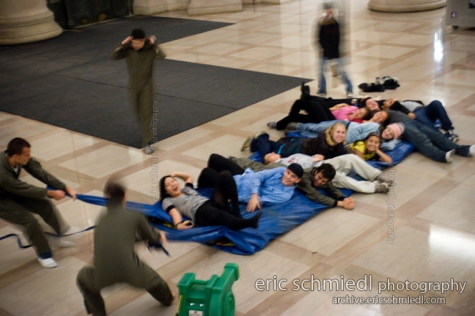 I ran off to find phys plant and thank them for letting us use the lobby and while I was gone there was a final jumpsuit picture taken. 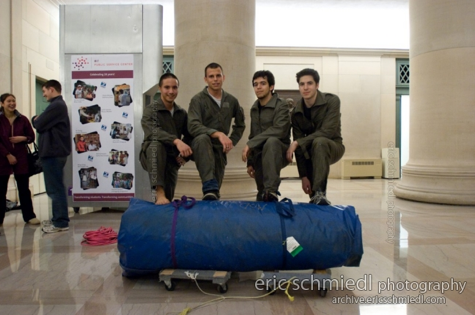 All bounced out, we retired from lobby 7 and headed back to the dorm to dream about bouncing. All in all, an incredible IFAF with a lot of incredible people. Rest assured prefrosh, if you come to MIT you can do this too, or even something more awesome if you have the creativity for it!

Also, I’m completely hosed until the end of the semester. I’m borderline in several of my classes and need to put in a lot of extra effort. As such, I won’t be blogging until probably December 19th-ish. It’s the longest hiatus I’ve taken from MIT blogging, but I really don’t want to fail my classes and things are about to get really hectic.

See you all later!