I read the blogs a lot as a prefrosh. And sometimes, one or three of the bloggers would drop off the face of the earth for a little while, and I would look down at their page over my absurdly high nose and think, “PSHHH.”

“Pshhhhh,” I would think. “If I had the honor of being an MIT blogger, I would not post as sparsely as a Donald Trump’s hair. I would post every day, about classes and my terrible eating habits and the way the trees look from my dorm room and exactly how long it takes me to tie my shoes in the morning. There is no EXCUSE!”

I have no excuse. It’s been a month and a week since I last posted. And it’s not for lack of material, either (it takes me 6.2 seconds to tie my shoes). I’ve got the Boston Marathon, Ring Delivery, AXO Lip Sync, the Burton Conner cruise, Dance Troupe, and the last study break we had in which we drank milkshakes while listening to Kelis under a sign labeled “THE YARD”. I have all of that, and still it’s been a month because I’ve been either hosed, or just kickin it in the sunshine out in Killian Court, or eating whipped cream out of a can.. or some combination of the three.

So I’ll start from the beginning: marathon day. Every year the American Red Cross invites a handful of MIT EMTs to come work the aid stations through the chief of our service, and so on April 21st I got up at a ridiculous hour to watch people go do ridiculous things. 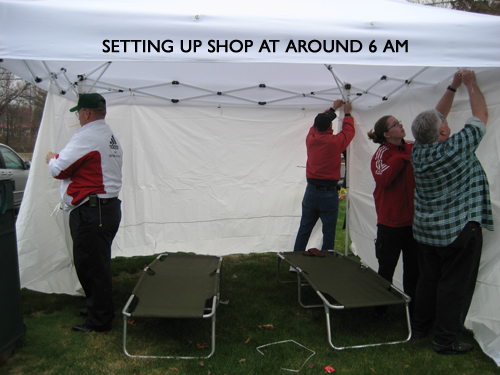 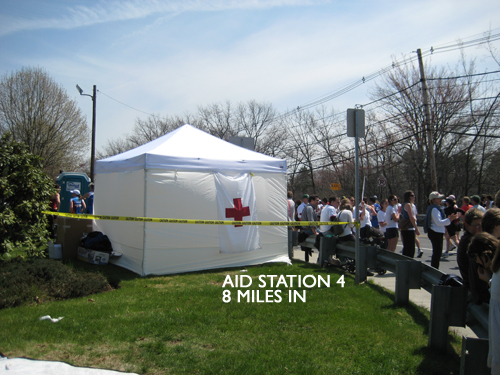 I’d never seen a marathon before, let alone the Boston Marathon, so it was a pretty exciting day. The wheelchairs are released about an hour before the runners, then the elite women, then elite men, then everyone else. 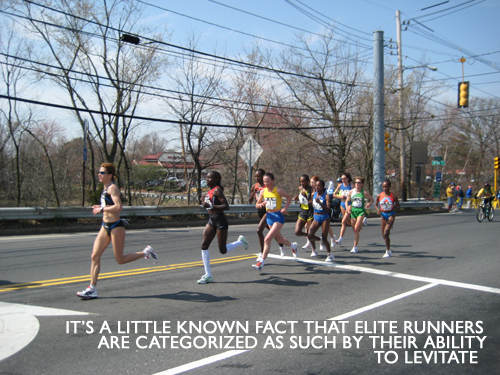 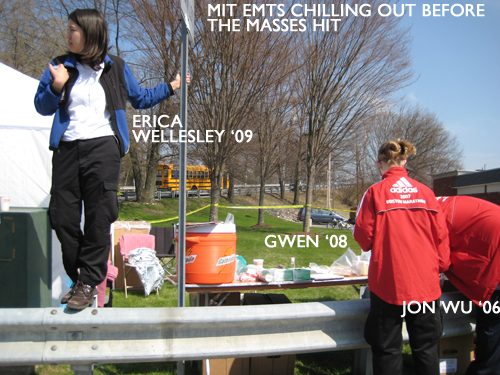 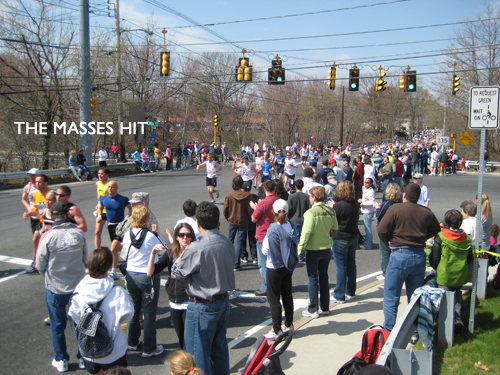 “Everyone else” doesn’t really adequately describe the incredible sight of 20,000+ people on their way to running 26 miles, which included a huge variety of people from all walks of life, from college students to grandparents to amputees to a woman who was 14 weeks pregnant (and stopped in to use our aid station’s restroom). It also included a couple hundred bandit runners, who haven’t officially registered for the marathon (there are a couple barriers to entry, such as the ridiculous qualifying time of a little over 3 hours, or a small fee) and therefore do not wear numbered bibs. Bandit runners themselves include completely serious 26-mile-runners to the costumed 2-mile-walkers: 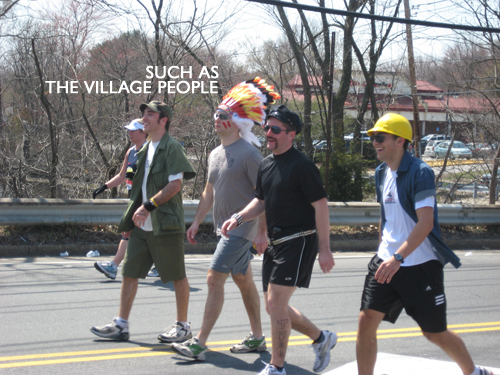 Around mid-day the runners had all passed through, and so we packed up and headed to the very last aid station to hang out with more colorful runners: 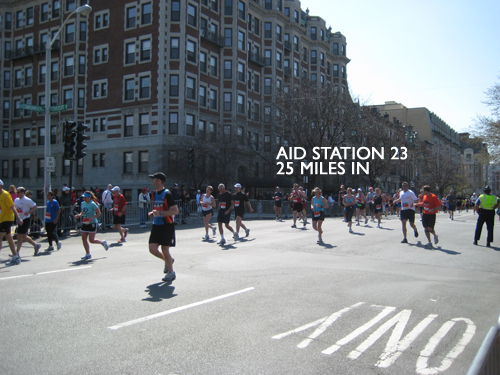 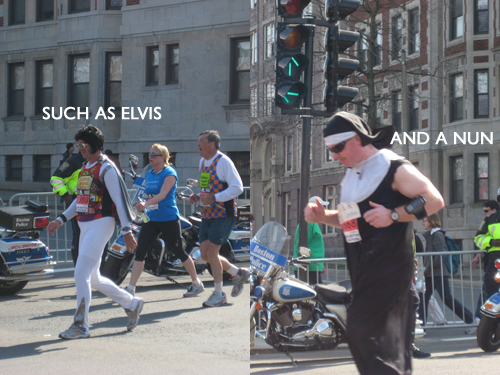 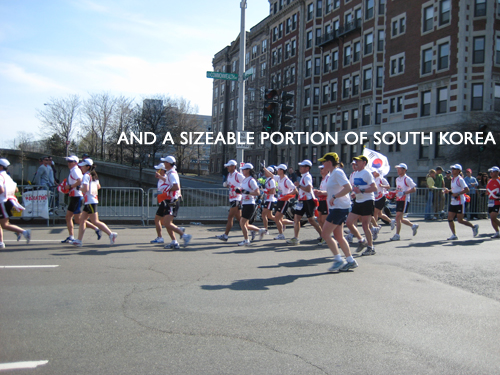 We were having a pretty chill time at the last station – at that point, most of the runners were basically finished- when all of a sudden, Jon Wu ’06 sat up and yelled, “IT’S BAKER HOUSE!” 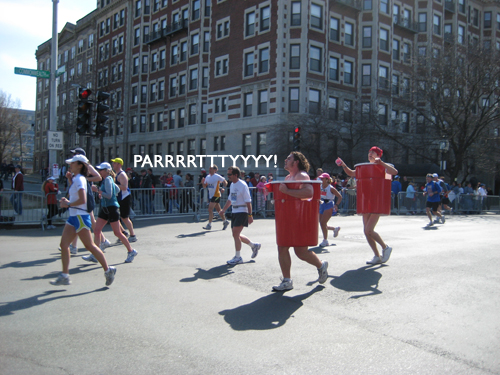 MIT had a pretty consistent presence, actually, including Bryan ’07 and a few others: 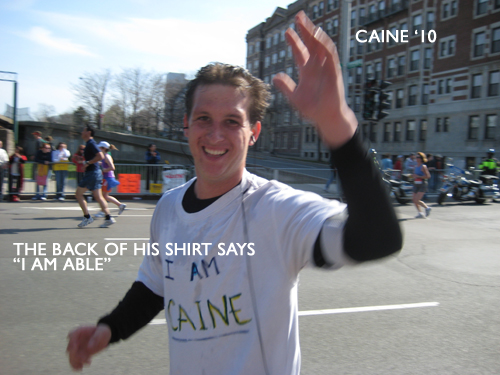 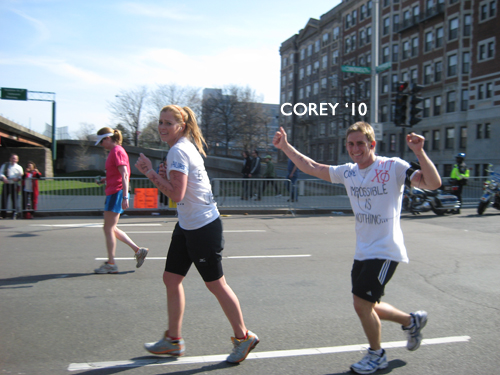 As EMTs, we handed out vaseline for chafing and sprayed a lot of calves with cramp spray, as well as treated more serious patients. It was good practice, and I got to deal with things we don’t normally see on the ambulance, like hypernatremia. 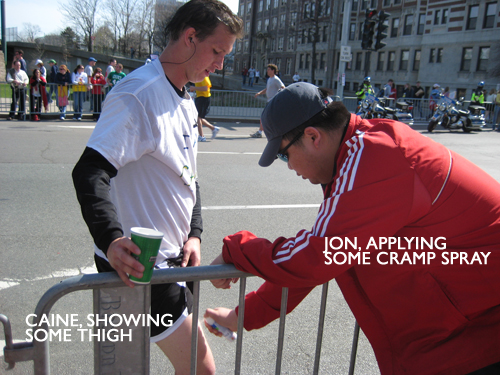 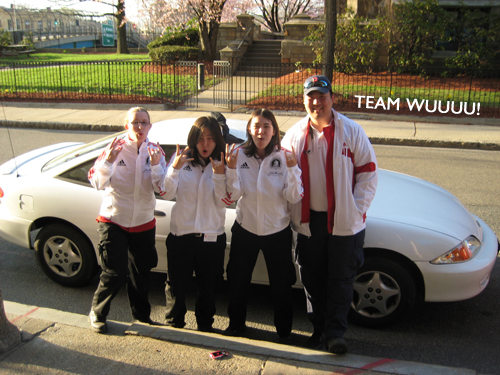 So okay, this entry is pretty overdue, and it’s maybe not one of the best on MITBlogs, but they can’t all be winners. I just found that entry last night and watched the video about eight times, and I feel like bringing it back completely makes up for all of my recent absence. Again, I apologize, and I may or may not be back before finals, but whatever happens – my deprotonated heart will love you.