Brains, Voltaire’s Son, and Other MIT Things by Yuliya K. '18

Notes from the Start of Junior Year

It’s the start of my third year here, and once again I am smiling at the first posts by our first-year bloggers. There’s a common theme: MIT is home and nothing will ever change that. It was the new bloggers’ theme last year too, same as the year before.

Above all, I’m just so glad, happy, elated, delighted to be here with people I’m already in love with and in a place I’m so proud to call home. (Alexa J. ‘20)

Over time, the sentiment from the bloggers’ earliest posts changes, but inevitably there is at least one final post by a student in their final year at MIT that reiterates the theme: MIT is home. Yes, it can be hard. But despite everything, it’s hardest to leave.

So what’s the third year like? Well, it’s the start of a new half of college. This year, I was asked what my post-graduation plans were on the student financial aid form. I said something vague like “graduate school” because really I want to be like one or more of my professors, but too many lucky stars need to align for that. What do I really want to do? Shhhhhh I have two more years.

A new half means a feeling of freshness added to old experiences. I’m taking two classes at Harvard this semester, and one of them is in an actual museum! The seminar room where we discuss Education and American Society has a reinforced door, so that, when it’s closed, the wall looks perfectly smooth. Like you’re talking in a small perfect cube (in the basement of the Harvard Art Museum). During our introductions last week, I told one of my Harvard classmates that I was studying Philosophy + Poli Sci at MIT and she was shocked: “I didn’t know you could study humanities at MIT!” Yep, the HASS departments are pretty awesome here. 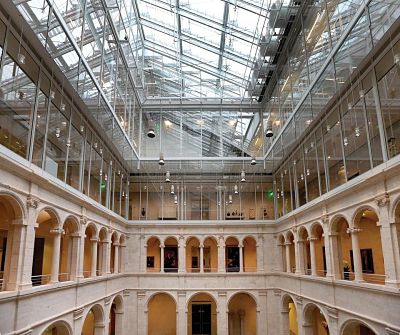 Another benefit of cross-registration: maximizing the completed major requirements. The Education class at Harvard is counting towards both of my majors and my HASS concentration. That’s a triple win! Maximization takes some adjustments, though. This semester, I’ve already submitted 3 Add/Drop forms plus a cross-registration form, and will submit another Drop form soon (“advisors hate her”).

Being a HASS major at MIT means that you still have to take STEM courses. As one of my science and technology electives (REST), I’m taking 9.01 Introduction to Neuroscience, and I am pretty excited. Brains are so cool! Seeing the effects of Alzheimer’s, schizophrenia, and other pahtological diseases’ effects on the brain, actually seeing what happens is appalling yet inspiring. Plus our professor not only wrote our textbook but also shared his yet unpublished research on reversing a certain brain defect during the first lecture. Science is pretty amazing.

And when it comes to amazing science, Professor Eric Lander is the role model. He “played a pioneering role in all aspects of the reading, understanding, and biomedical application of the human genome. He was a principal leader of the international Human Genome Project” (source). There’s also Professor Robert Weinberg, who is “a pioneer in cancer research most widely known for his discoveries of the first human oncogene—a gene that causes normal cells to form tumors—and the first tumor suppressor gene” (source). Why am I writing about them here? Well, these two professors are both teaching 7.012 Introductory Biology, which I’m taking! Last week, the 7.012 class director was looking to hire a couple students to wipe the giant blackboard in 26-100, our lecture hall, before class. “Who wants to be able to tell your future employers that you worked for Professor Lander and Professor Weinberg at MIT?” asked Professor Lander. What an intriguing pitch! Too bad the class director only had 8 application forms for the 100+ immediately interested students. The application is now online.

(Note: you have to see Professor Lander dancing to Gangnam Style here; also, oppa Chomsky style in the same video)

Fun fact about MIT alumni: Fukuzawa Yukichi’s son, Sutejiro Yukichi, went to MIT and graduated from Course I. Civil Engineering! Fukuzawa Yukichi is known as the “Voltaire of the East,” and is still on the Japanese 10,000 yen note. I’m thrilled to go to a college any “Voltaire” found good enough for his son. No wonder that the class of 1888 felt confident in its future with Fukuzawa Yukichi’s son “at the cash-box” (i.e. as the Class Treasurer, see 1888 Class History below). Sutejiro was also one of the editors of the 1886 (the second ever) MIT yearbook, Technique. In 1901, he used his editor skills again to succeed his father as Manager/Proprietor of the Jiji shimpō (“Current Events”), which was for years one of Japan’s most-influential newspapers. I discovered all this as part of my summer UROP (on researching the history of international students at MIT). Sutejiro Yukichi was one of my favorite international students from the start of the research project, and he is continuing to make me proud to be at MIT. 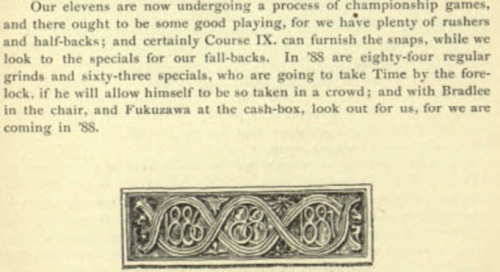 Being back on campus means being back in the middle of everything fun. And I’m not just talking about the myriad of events going on at the Institute. Two subway stops from here is downtown Boston. Two subway stops from here in the other direction is Harvard Square. The subway station is five minutes away from my room in East Campus and so is the beautiful Charles River. Top that location! You get the comfort and safety of Cambridge and the bright lights of Boston. Certainly a difference from the .5-1.5 hour commute from Lexington I had to do over the summer just to get to Cambridge. 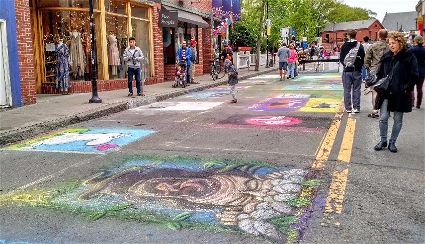 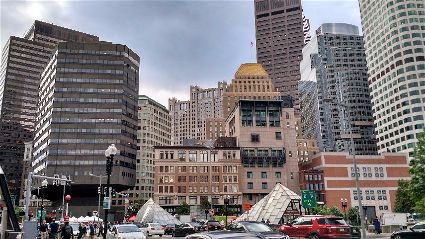 I have a lot more to talk about from just two weeks back on campus: new people (<3), MIT classes, the correlation between inequality and cinema attendance (likely spurious), new extracurricular, MIT Libraries, a visit from old friends, new room… But I have to study some Neuroscience instead (which isn’t so bad either). In the meantime, go read the new bloggers’ posts: “Three Weeks” by Joonho K. ‘20, “I Survived Week 1 and All I Got Was 10 Lousy T-Shirts” by Abby H. ‘20, “All the Feels” by Alexa J. ‘20, and “On being at college” by Fiona M. ‘20.