Why it's so hard to tell college students to ease up a bit.

On a weekday, I meet my friend Alberto H. ‘17, who I haven’t seen in a long while, for dinner. We live farther away from each other this year, and we’re all always busy, so this is, surprisingly, a rare chance. I ask him how his life’s been lately.

He pulls out his cellphone, and explains his life to me in terms of his calendar schedule, which has everything on it from important academic and club activities to hangout time with friends.

His whole life is parsed out into little hour and half-hour red blocks, many of which overlap.

He talks me through how this week he’s been working with minority high school students visiting campus, TA-ing for a class or two, and applying to grad school a year early (because he is “one of those”, you might say). He runs through his hangouts at Wellesley with his friends there, tells me about his girlfriend, and we both get excited about the Amharic class he’s taking at Harvard. On our way out of the dining hall, I stop to get some coffee and he chats with a friend he runs into, and they start arguing about some physics test or pset question (he’s Course 8: Physics). “It’ll be 1/e, I’m sure of it!”, he yells back to her as we walk out.

“I’m sad”, I say, “I feel like I haven’t seen you guys at all this year,” referring to our mutual group of friends who are all staying in the Hyatt.

“Yeah,” he says, “and I might go to Italy for IAP. We’re all busy.” There’s a moment of quiet, after all the rapid talking we’ve been doing to catch up.

“Love you bye!” he shouts, giving me a hug and leaving to go do whatever small, red block he’s got next.

As I walk back to my dorm, I bump into one of my housemates, who tells me about her worries about her relationship. She doesn’t want to make it sound like her boyfriend is an extracurricular activity, but at the end of the day, she’s been stressed out trying to keep up with everything–classes, activities, applications–and she doesn’t know how to tactfully ask him to let her focus on her busy career and academic life for a second.

A Facebook post from my friend, Pedro P. ‘17: “I didn’t know I could run at this speed. I’m on pace to have the busiest and most productive week of my life”.

Yet another busy, hard working friend says while we are psetting 2.001 together, “I feel like it’s not just class that makes college hard…if it were just school, I could handle it, but there’s all this other stuff on top of that”. She’s worried about being able to get a job to help pay for school, on top of doing a lot of great things with culture and advocacy clubs on campus.

I was originally going to write and publish this post earlier, but this past week I became avalanched with work. I haven’t been posting as many blogs as I used to. I was feeling unwell and sick over the weekend, so I didn’t accomplish very much. Even though we had the day off Monday, all of my work was due on Tuesday, except 6.005, which I took an extension on. I slept four hours every night this week. Today, Friday, I’m really, really feeling the results. I planned to go to sleep and wake up early to do my 2.001 pset before it was due–alas, my body betrayed me (or rather, revolted against my absurd demands of it) and I slept through my alarm. I woke up an hour and a half before class, wrote down some equations after looking through our class discussion site and handed whatever I had in.

I could use this post as a platform to rant about why 6.005 should really be considered 22 credits instead of 12, but hold on.

What most people don’t seem to understand–both about themselves and about others–is that even if you love what you do, that doesn’t mean it’s not hard, and that it can’t hurt you. You still need to separately take care of yourself, your social life, and your physical health apart from your passions–which is what I’m now realizing. Even though I think this last week I’ve gotten the least amount of sleep than I ever have in maybe my whole life, and literally spent every other non-sleeping hour working (80% of which was on 6.005) I still, still think it’s a lot better than my freshman year here, and it’s been really incredible being able to do and accomplish everything that I have. I like my work a lot. Coding in 6.005 has become really interesting and intriguing, and my Mech E. classes make me appreciate math again (if only slightly). Being on the Chinese Students Club exec board has always been great, and I have a much better appreciation for the community that it provides this year. The UROP I’m beginning in the MIT Media Lab is fascinating and, I think, will teach me a lot of practical skills. I’ve also been working a Federal Work Study job with a nonprofit called Be More America, which aims to solve racial inequalities in health care. As someone interested in advocacy and similar problems, I find the work fulfilling and the discussions interesting.

I recently received an email question from John Clarke, of Virginia Tech.

“What is the workload like?” is also a question of, “what counts as work?”

Even when it comes to the actual, definite, academic workload, a lot of people really do like their classes. For me, spring semester freshman year was definitely an academic fire hose/waterfall/field of fire and flames/what have you, but sophomore year is a little different. I like my classes so much more; I actually want to learn and understand the material (which sadly I could not say was true of some of the general classes like 18.03), and I do feel I’m doing better in them than before, too.

I don’t think there’s anyway for MIT to not be hard, but I actually think a lot of people take on, intentionally, more than they have to. Joining a club or community, for example, is not at all a requirement. Having a job is a gray area–many people really do need them to help pay for personal expenses, but sometimes some students just want to be a TA or do community service work study, and the money earned is more of a bonus than the main attraction, an addition to what they earned over the summer. And there’s a term, “FOMO”, or “Fear of Missing Out”, that I think also describes a lot of people–it’s difficult to say “no” to things when actually, you really do want to do them, but simply don’t have the time.

There are 1) only so many hours in a day and 2) we have physical limits (which I’ve been recently both pushing and discovering) (which is probably bad).

We all have our different ways of balancing, however precariously, life and school. Except it’s not really just life and school. School isn’t really just school–it’s classes you have to take, yes, but it’s also really cool research, projects you are passionate about, things that genuinely excite you and you really feel motivated to put time into. Then, there are clubs and communities: culture clubs, Greek life, student committees and executive boards you are on to try to help actually effect change or make a difference in this community, on issues that you care about. Groups where your obligation is not a grade, but your commitment to the community, and your relationships with others. Lastly, there are the least structured commitments, and therefore sometimes the areas that take the most hits: family, friendships, relationships. It’s best if you can work those last three things into academic and community life–hang out with your fraternity brothers at a house meeting, catch up with a classmate at a BSU barbecue, whisper about your summer activities with an old floormate during a Course 2 advising presentation. But sometimes you can’t.

It’s difficult to make time for people. The people in my life are very important to me, and I try very hard to make time to maintain my relationships with them. I try to have rules–for example, if my time is not directly and definitely occupied (i.e, I would be doing something or other but I don’t actually have a scheduled commitment) I don’t refuse an invitation from someone to hang out. I’ll never refuse lunch or a coffee run. If I am busy, I try to find a way to visit/hang out/eat food later the same day or the next. But sometimes, some of my friends that have also been operating in their own spheres of academics, communities, activities, life. Instead, I need to extend invitations to them sometimes, and it takes extra effort to remember to do this. And sometimes, while we are together, they are still checking their email, updating calendars, fitting everything into everything else a little bit too tightly, so that school and clubs overflows into hangout time.

It’s a weird mix of being honestly, genuinely happy, and yet feeling stressed about workload and time. This is the most rigorous and exciting challenge of our whole life thus far. College students (all college students) are high capacity individuals, pushed to the highest limits of their capacity. It is exciting to have to use your brain that way, to stretch your mind in corners you didn’t know existed in your skull, to just grow, soaking up all this knowledge and all these experiences. To learn so quickly that you look back and realize you sort-of-mastered Python in only three weeks, which you could not have done in any other environment. To see your ideas for your clubs and communities actually happen, to hold that event, to start that new student group, to actually have participation from a lot of people. Sometimes people clamoring, “slow down for your own good!” (although they are perfectly right) don’t realize that for many of us, this is what we want to be doing. This is what we came here to do.

It’s just that, at least on occasion, we need to slow down, and stop, and breathe. 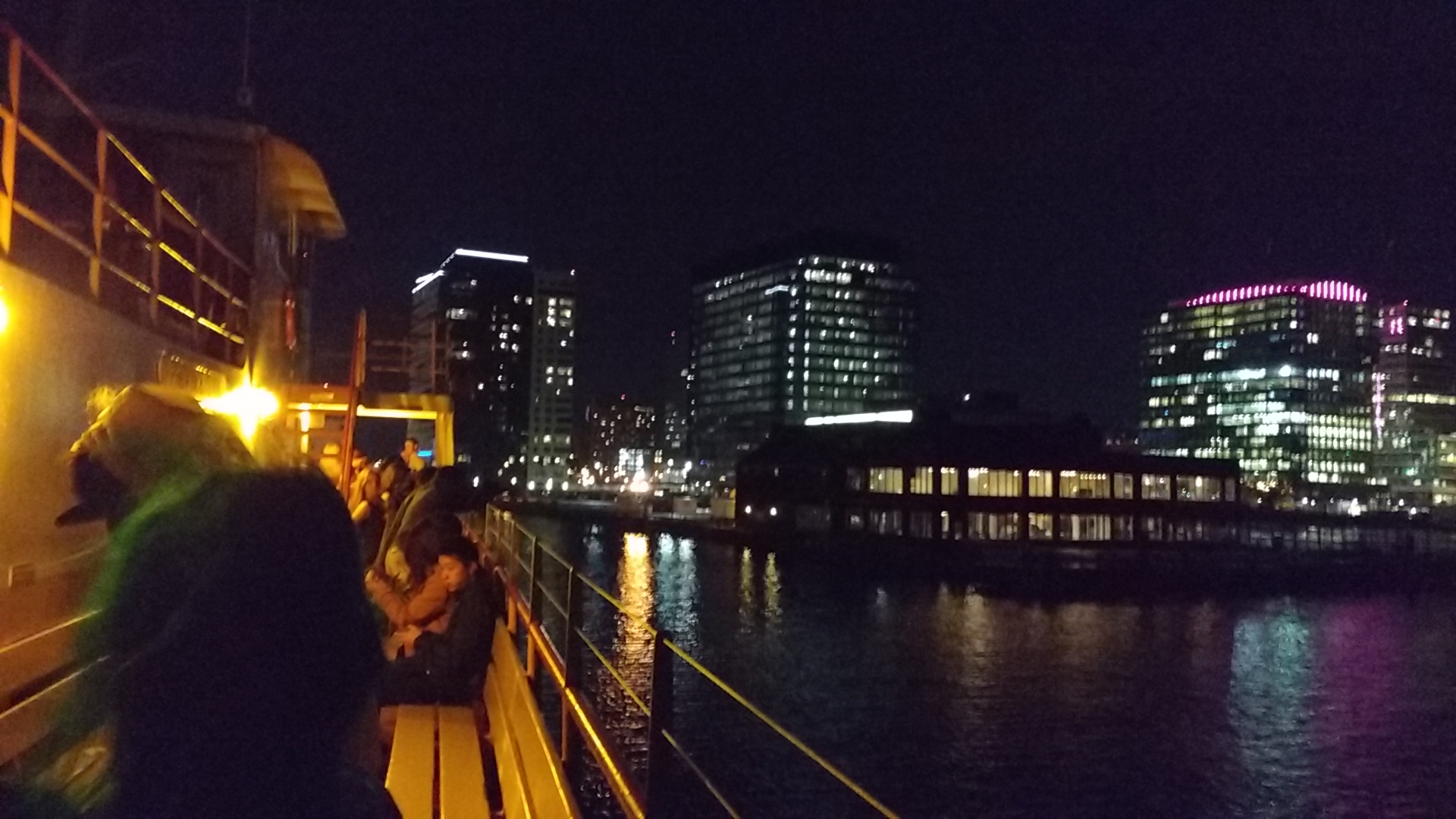 (A view from the boat where MITCSC held our Utopia event. When we pulled back into the harbor I took a moment just to look at everything, between all the craziness of planning.)

Note: I posted a more “poetic” version of this post on Tumblr, if you’d like to see it, it’s here

Note #2: I’m posting this as-is (typos and all) to reflect my mental state as I was writing it throughout the week