The MIT student group The Laboratory for Chocolate Science is featured in today's Boston Globe.

One of my favorite of MIT’s 500+ student groups is called the Laboratory for Chocoloate Science. According to their Wiki, LCS can be described:

Founded in 2003, the MIT Laboratory for Chocolate Science (LCS) is a student club dedicated to spreading the appreciation of chocolate on campus, and to bringing opportunitites for learning about, appreciation of, and indulgence in our favorite substance to the community.

In today’s (Wednesday’s) edition of the Boston Globe, the second major media article about LCS will run. My favorite discovery from the article is this video:

Here’s the article itself:

At MIT, a hunger for chocolate knowledge 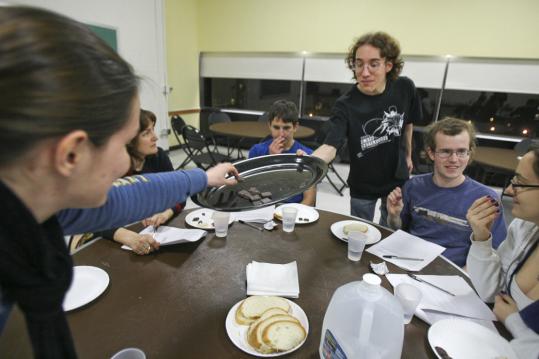 Jayson Lynch (center) hands out samples at an MIT Laboratory for Chocolate Science tasting.
(aram boghosian for the boston globe)

CAMBRIDGE – Conversations about chocolate typically revolve around the obvious: flavor, intensity, milk vs. dark. But for the students in the Massachusetts Institute of Technology’s Laboratory for Chocolate Science, the discussion runs a bit more, well, technical.

You may learn, for instance, that chocolate has six crystalline states and that heating it too quickly can separate its molecules and cause it to become gritty. Or: When chocolate absorbs moisture, fats and sugar crystals rise to the surface or “bloom,” causing it to take on a whitish sheen or oily texture. (Hence the film you might find on last year’s Christmas candy.) “It’s fun to explore the different sides of chocolate,” says Allison Kunz, 23, who graduated last year and still attends the group’s events. “There are scientific, political, and business aspects.”

The laboratory, which is essentially a chocolate appreciation club, formed in 2003 as an extension of then-student Ariel Segall’s truffle-making parties. Today, there are about 10 active members – mechanical engineering, chemistry, material science, and mathematics majors united by a love of cocoa – and close to 500 people on the lab’s mailing list. They come together regularly for tastings and chocolate classes; most events are open to the public. To generate interest, the chocolate enthusiasts don matching pink or brown T-shirts featuring molecular diagrams of chocolate and coffee and set up a table near the entrance of freshman orientation or activity fairs. “We’ll have fondue – people can dip strawberries or try chocolate flavored with strange spices,” says sophomore Anna Waldman-Brown, 19. The spread, not surprisingly, is popular and draws in members.

During the school year, the group raises money through truffle sales. They make white, dark, and milk chocolate varieties, flavored with everything from habanero pepper to chai tea. Two of the more unique (and potentially off-putting) flavors the group has experimented with are wasabi-lime truffles and Marmite truffles. Members joke that they should create a “Beaver Bar” – a treat named for the school’s industrious mascot. Students are known to serve hot cocoa during finals and hold brownie bake-offs. Earlier this year, a representative from Kallari – a sustainable chocolate-making cooperative in Ecuador – spoke at the school.

At a recent dinner the lab put on, self-described “chocolate freak” Ian Hawkins and his wife, Bronwyn, sampled white-chocolate potato curry and chicken mole. The couple, who live in Boston, found out about the Lab for Chocolate Science at WeirdBostonEvents.org. “I’d love to have the bank account to only buy good chocolate,” Hawkins says. But not with today’s “financial apocalypse.” He’ll be back at MIT for more tastings.

Students may adapt the tasting terms used to describe wine and other foods – i.e. fruity, oaky, and earthy – to chocolate. Small San Francisco-based chocolate manufacturer TCHO, for example, uses a flavor wheel to differentiate and label its products.

This group has a thirst for chocolate knowledge, but the students are also motivated by a sweet tooth. “We just love chocolate – we’re really passionate about it,” says senior Meghan Reedy, 21.

For more information about the Chocolate Lab, go to web.mit.edu/chocolatiers/www. Check out a video of the MIT chocolatiers in action at www.how2heroes.com/videos/dessert-and-baked-goods/mits-tea-infused-chocolate-truffles

I said that this was the second major media article about LCS. They first made a big splash in 2004 with this article in the New York Times!

A Lab Where You Can Lick the Test Tubes

AS two pots of viscous goo bubbled away beside Susan Born in the dank, fluorescent-lighted classroom, she described for a rapt group of 30 students the molecular composition of the substances and, with the aid of time-temperature graphs on the chalkboard, discussed lipids and their solubility.

A fairly typical scene at the Massachusetts Institute of Technology. Except this was not a materials science class. It was a meeting of one of the school’s newest student organizations, a chocolate appreciation club called the Lab for Chocolate Science.

Ms. Born, 28, a technical writer and 1998 graduate of M.I.T., gave a two-hour lecture on the science of chocolate with pots of melted chocolate chips as props. Professors argued whether chocolate could glassify, and words like eutectic — something to do with melting points — hung in the chocolate-scented air.

The group was started last fall by Ariel Segall, 23, a senior from Englewood, N.J., whose chocolate fascination dates from childhood, when, by age 10, she had developed a preference for dark chocolate from Zabar’s. By her early 20’s, she tasted a Black Pearl truffle, a combination of wasabi and ginger dipped in dark chocolate and sprinkled with black sesame seeds, from Vosges Haut-Chocolat in Chicago. Inspired, she replicated the flavor with friends and started being the host of truffle parties two years ago. The lab is an extension of those parties and a way to experiment with the types, flavors and textures of chocolate.

The chocolatiers’ first experiment was making 4,000 truffles for a freshman fair.

While many came to the lecture for the chocolate — leftovers were on sale from the group’s last truffle sale, which included cardamom-Kahlua, hot pepper-cinnamon and peach-passion fruit — since this is M.I.T., many wanted to know if they should take their test tubes to the next meeting.

“We’d gotten some e-mails from people wondering if we were an actual laboratory,” said Kat Allen, a junior and the treasurer of the group, which now boasts about 20 full-time members.

In a place populated by chemists and engineers, group members knew it would be a hit with students. Ms. Born added that a fashion trend among students and alumni involved T-shirts bearing molecular diagrams of chocolate and coffee.

Who wears these shirts?

Cocoa butter, along with cocoa powder, the main component of chocolate, is made, Ms. Born said, of fatty acids, including palmitic acid, a 14-carbon chain; stearic acid, a 16-carbon chain; and oleic acid, an 18-carbon chain. She said the mixture of fat in cocoa butter has six stable stages — distinct consistencies — which is why processors have to temper, or heat and cool, chocolate, to attain the desired consistency.

“The part I liked the most was when they explained the three different fatty acids,” said Vigi Braviam, 27, a postdoctoral biology student. “Now I feel like I can mess with my chocolate a little more. I can just add more palmitic acid, and it will solidify a little more.” Palmitic acid, she said, is just palm oil, which she can buy at a local chemical supplier.

The club plans to continue its nonscientific activities, like brownie bake-offs and chocolate tasting. But Ms. Allen thinks the science of chocolate could catch on.

“It would be cool if we could teach an actual for-credit class one day,” she said, “but that’s pretty far out there.”

And for those of you coming to CPW… the Lab for Chocolate Science will be one of hundreds of student groups represented at Saturday’s Student Activities Fair. Yum!