The Brass Rat is one of MIT’s most iconic symbols. Like you know something’s legitimately famous when it has it’s own wiki. But it’s more than just famous. To MIT students, it’s a symbol that we made it halfway through MIT, which is no small feat!

Ring Premiere is one of those events that all sophomores look forward to. During the actual event, the Ring Committee reveals the designs of our class year’s ring that they had been working tirelessly to create. It’s a time to get together with your fellow sophomores on your dorm hall/wing/entry/house/floor, your frat, your sorority, your independent living group, etc. and celebrate and show your community spirit! And one of the main ways people do this is by dressing up! My living community, 3E in Next House, decided to wear our Danger Third Rail (how 3E is affectionately referred to) t-shirts (which you can’t really see because we all had multiple layers on because Boston weather)! 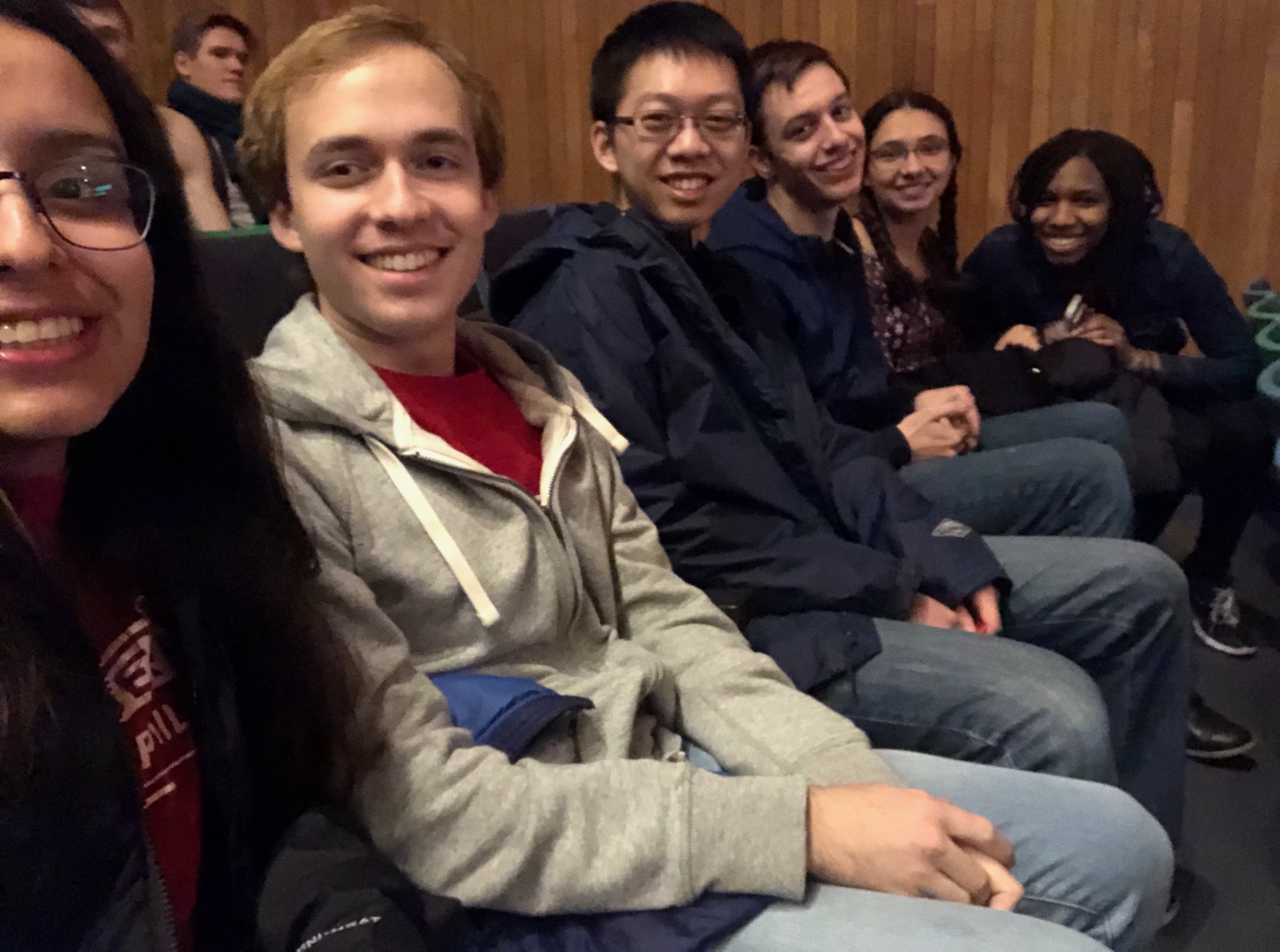 We left our wing at 6:50 p.m. to get to Kresge by 7:00 p.m., the time the doors opened, but there was already a HUGE line. And when we got inside, Kresge was already more than half full! We ran down, up and across the isles to find a row that had enough seats next to each other for all of us. And when we finally sat down, I was actually able to look around at the people in the room. What I saw was Kappa Alpha Theta dressed as KAT-lle (cowbells and all), another group of people dressed as fruits (including an orange, pineapple, and strawberry), a frat wearing tank tops, Burton 1 (a floor on Burton Connor) wearing row-boats made of cardboard and carrying actual oars, one person wearing a shark body suit, and another wearing a T-Rex body suit (see video below). 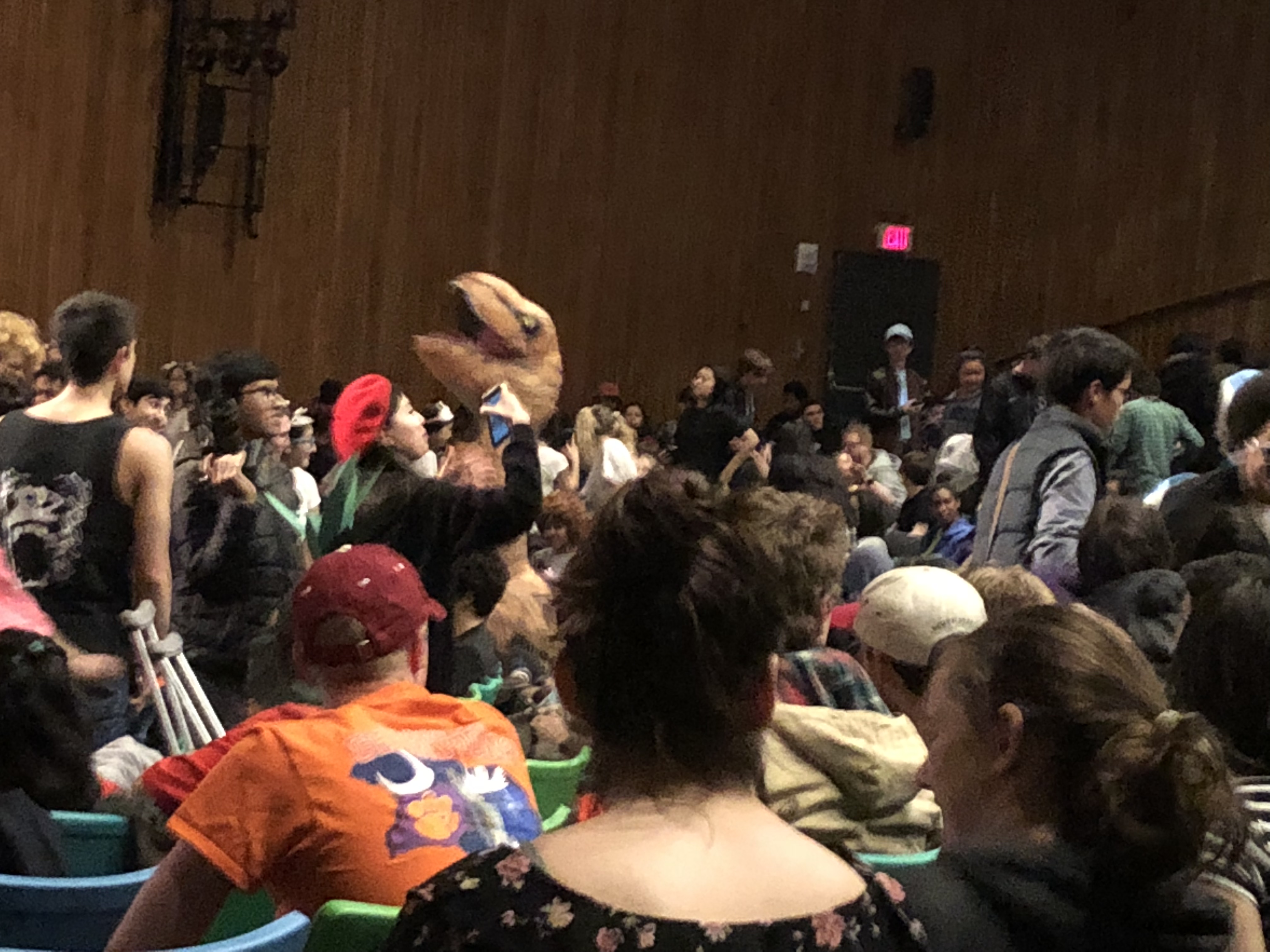 What I heard was the sound of a middle school cafeteria x10. I thought the room couldn’t get any louder, but then the two 2019 Ring Chairs came on stage to introduce the 2020 Ring Committee. They had microphones and speakers and all — you know, those devices that are meant to make your voice loud enough to speak over loud and large crowds of people. Well, the class of 2020 got impressively loud to the point that the 2019 Chairs might as well have been just mouthing the words to their speeches.

And then the actual 2020 Ring Committee came on stage and yet again, the uproar seemed to increase by 10 decibels.
They came up, two at a time, to present a specific portion of the ring and what each little detail meant. Just to give a sense of how crazy and loud it was, here is a video of the person wearing dinasour costume running across stage.

Between the pairs of presenters, a freshman volunteer would come on stage with a bag filled with ticket numbers (that matched the ones we were given as we came into the theatre). And the two Ring Comm members that were on stage at that time, would pick one and read one out. This raffle process was the ONLY thing that seemed to make everyone quiet down. And the reading of the ticket number was probably the ONLY set of sounds I heard clearly from the stage. In total, I believe 4 rings were raffled off. The raffle tickets were either white, red, or blue, and before they said the number on the ticket they would say the color. I along with my friend Karen had blue tickets. So by the third time that a red ticket was selected, we were both ready to flip a table. The fourth time they took out a ticket, Karen could tell that it wasn’t red and said, “Yes! Finally a blue ticket!” And a second later, the person presenting said, “White Ticket, number…” And we literally flipped a table (no we didn’t haha, but we were very ready).

The last part of the presentation was what everyone was looking forward to – the reveal of the Bezel, the front part of the ring that has the iconic beaver on it. But our ring this year, in 2018, the year of moving forward and progress, strayed away from tradition! And instead, we have the “This is fine dog” meme as our Beaver!!!!! This year is the year where memes finally got the recognition they deserve! And as Heather N.’2020 pointed out in her presentation of the Bezel, “The meme is the primary art form of our generation. The bezel would not be complete without a reference to meme culture, a culture that we as millennials all participate in. You tag your friends in memes on facebook, you make memes, you are memes. We are all memes.” It was a truly uplifting and inspirational moment, truly the highlight of the entire event.

Until they revealed the *actual* Bezel design. Revealing a Joke Bezel before revealing the actual Bezel is a tradition (I’m not sure for how long, but at least since the 2019 Joke Bezel, which had Harambe instead of a Beaver). Most people that I spoke to about premiere knew to expect a joke Bezel because they heard stories about Harambe on the Joke Bezel last year from their Sophomore friends, but it was really funny nonetheless. There are a lot more details in the Joke Bezel that I didn’t quite catch but here is a picture of it. 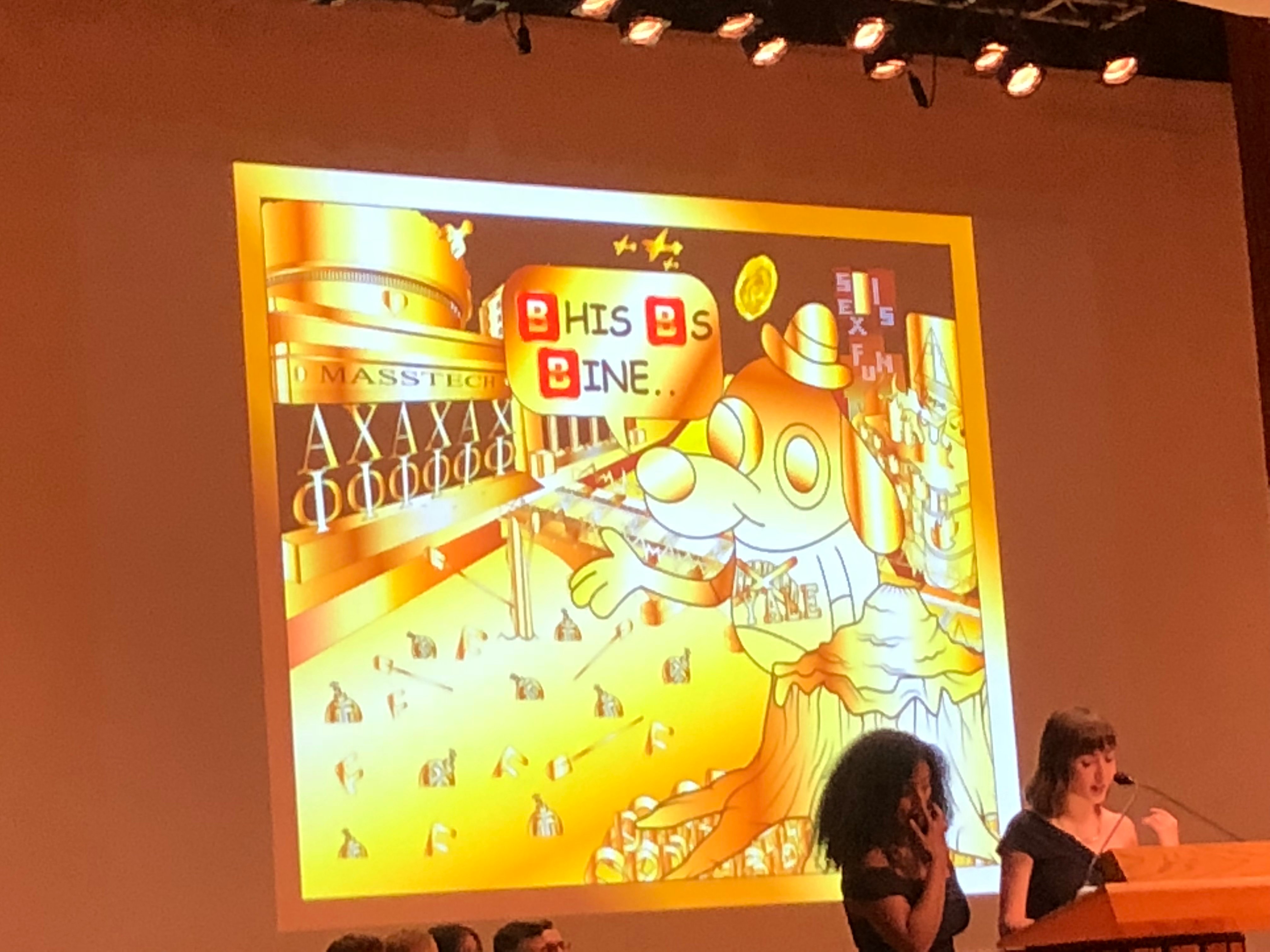 Here is a picture of the actual Bezel! 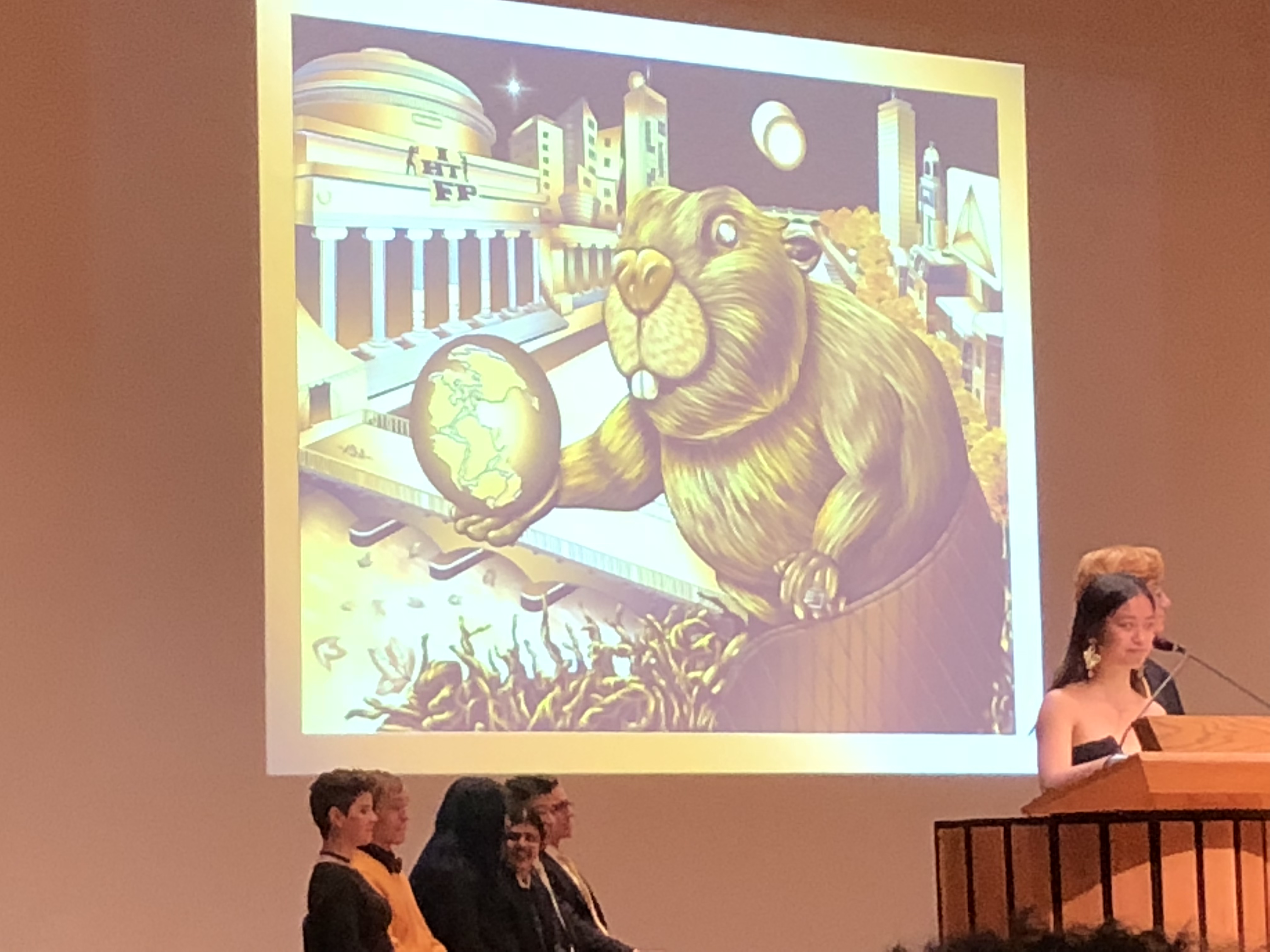 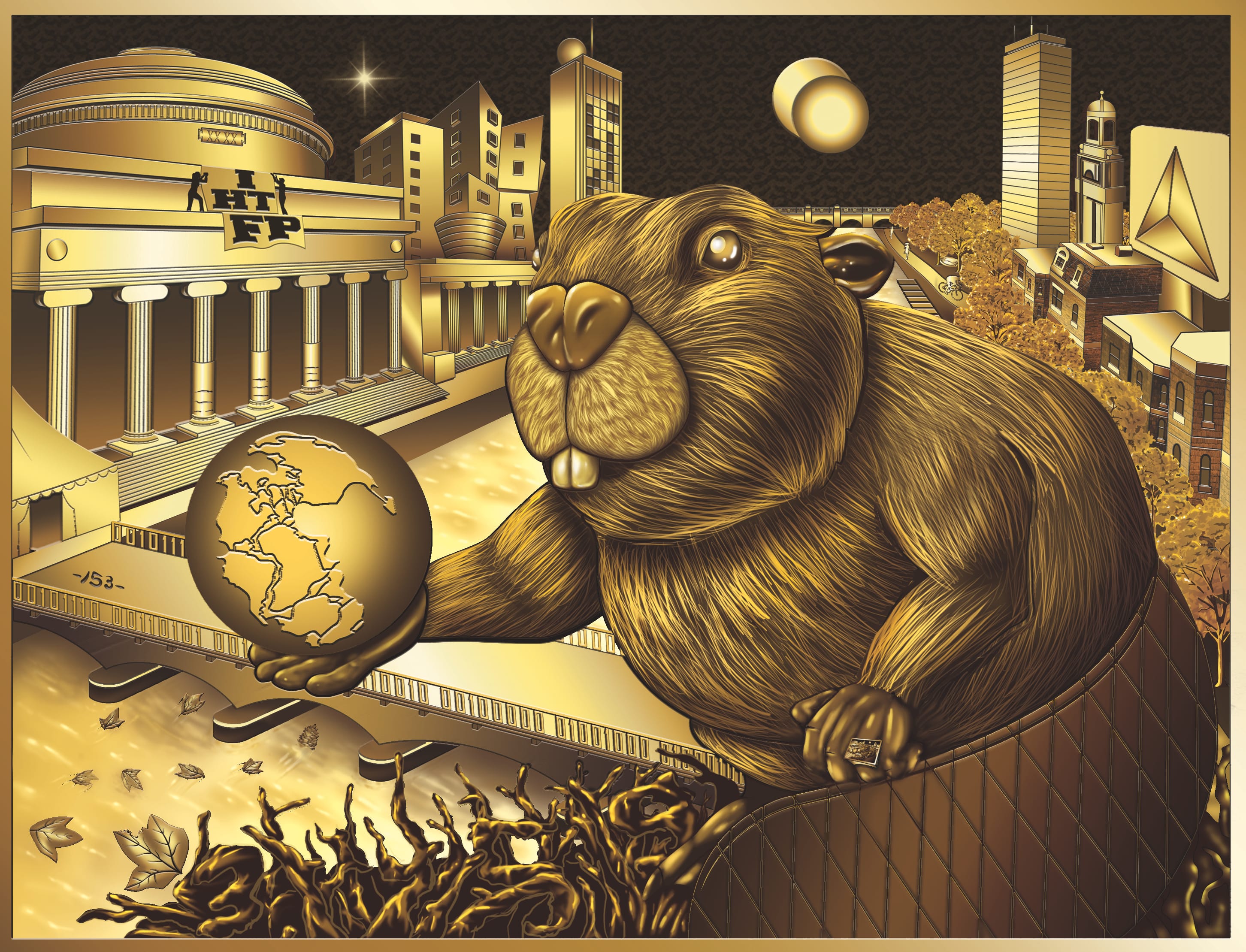 After ring premiere ended, 3E went to get waffles and then went back to next. Yesterday, we went to ring sales, and purchased our rings! I can’t wait to get mine at Ring Delivery in April!! Post on this to come!

Last year towards the end of spring semester, I found out that I was going to be part of our class’s Ring Comm!! I remember that when I got the phone call from the chairs of the 2019’s Ring Comm, I actually didn’t immediately say yes, but rather asked if I can have time to think about it, because we were warned that Ring Comm would be extremely time consuming. Well, I’m more than happy that I did end up saying yes because while Ring Comm was a HUGE time sink, it was time I would rather have spent doing nothing else and with no one else! (plus being on my ring comm, in a way, helped me become friends with one of last year’s ring comm members, which I’m also really happy about!) Obviously there were moments during our late night 3-hour Wednesday meetings when all I wanted to do was to go to sleep, but what happened 2 days ago made it all ALL worth it!

After almost the entire semester collaboratively designing every, and I mean E V E … Wait let me actually stop before finishing the 2nd half of the sentence, and put some more emphasis, because I don’t think capitalization and spacing does enough. Imagine putting 12 artists/designers/peoplewithopinionsaboutaesthetic/peoplepassionateaboutmitculture who are all extremely detail oriented and that all come from different corners on campus for three hours in a room with one piece of paper and a crayon. That was ring comm every Sunday and Wednesday for the past 10 months. Except instead of a paper and crayon, there was a tablet and stylus. Also, add in a professional designer named Kevin (pssst @ Kevin, Ring Comm 2020 loves you!!) and a student-facing-business-person-that-works-for-the-ring-manufacturing-company named Jeff (pssst @ Jeff, Ring Comm 2020 loves you too!!). Then add our 12 voices discussing (often too passionately) the most minute details of the Bezel, the 2 shanks, the 2 skylines, and the Hacker’s Map. Okay, now let’s go back to finish that first sentence … and I mean E V E R Y detail of the Ring, we finally get to present our designs at Ring Premiere!!!

So let’s rewind to Friday morning. I had class at 9am (insert an emoji that depicts the emotion of NOT HAVING IT… because I most certainly was not at that early hour). The class was actually really cool, but I will leave that for our belated beginning of semester post. When it was over, I did some assignments, and went to office hours for a different class that is eating me alive (and unfortunately had to miss the MITandSlavery event that one of my friends Charlotte M. 20’ was presenting at!!! Good thing there is this handy dandy blog and live stream…. Go watch it! To summarize inadequately and to say the least, uncovering and addressing history, even disturbing history, is important.) When office hours finished at 3pm, I went back to my room in Next House, ate a snack, and drank some tea. Since I didn’t know what I wanted to wear at Premiere yet, I just grabbed a bunch of clothes that could be arranged to create potentially suitable outfits. I headed out to eat dinner at McCormick exactly at 5pm so I can be at Kresge at 5:15pm.

As soon as I entered Kresge, I saw 2021 volunteers preparing goodie bags that would be handed out after Premiere. I then saw Vanessa W. ‘20, our Ring Committee Chair, and we talked about how this brought back so many memories (because we were both freshman volunteers during last year’s Ring Premiere). I then went to the dressing room, and proceeded to get fashion advice from my fellow committee members. They encouraged me to wear what I wanted to, which was an entirely yellow sweater (despite the dress code being only an accent of gold/yellow)! I also then added a black bow tie with yellow polka dots. We then had a run through of our entire presentation. About 20 minutes before doors opened, Jeff brought our demo rings for us to wear and to keep for the next 2 months! We were all beaming! After gawking over our rings and taking multiple selfies, we went backstage and waited as the chairs of last year’s Ring Comm introduced us! 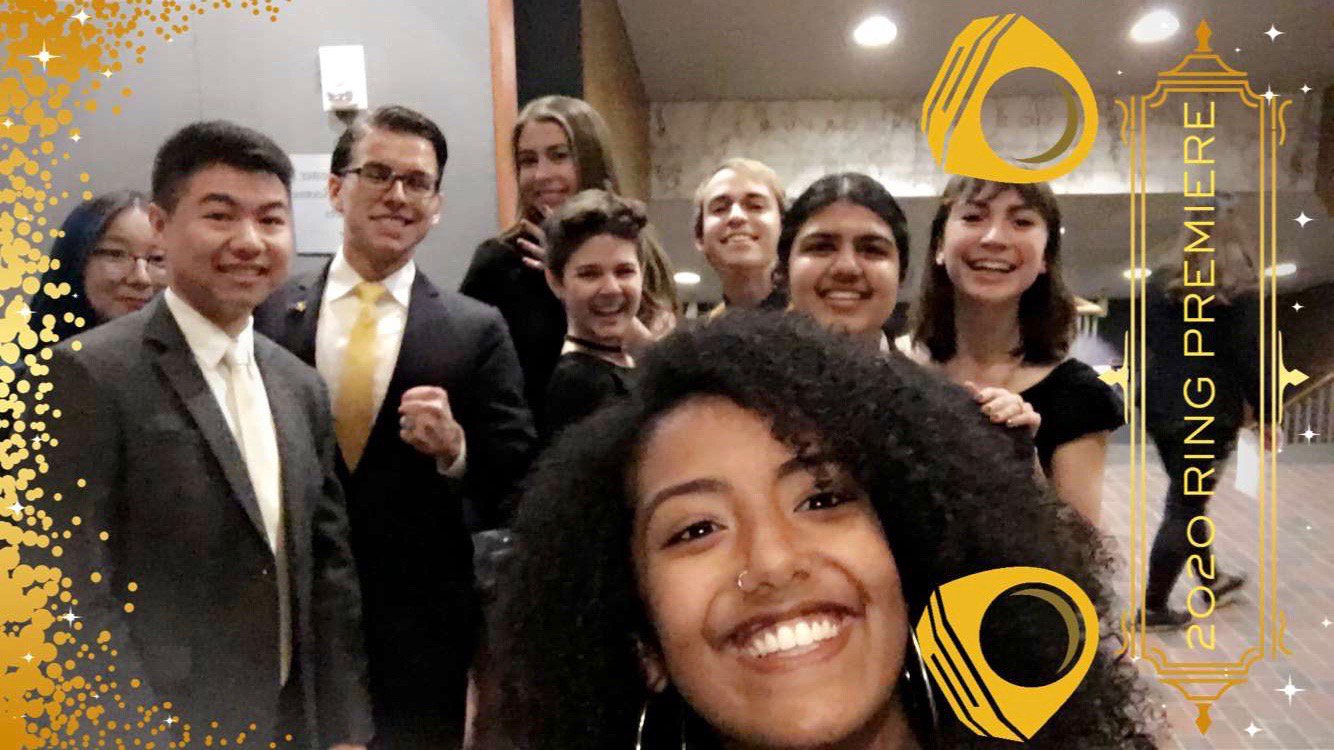 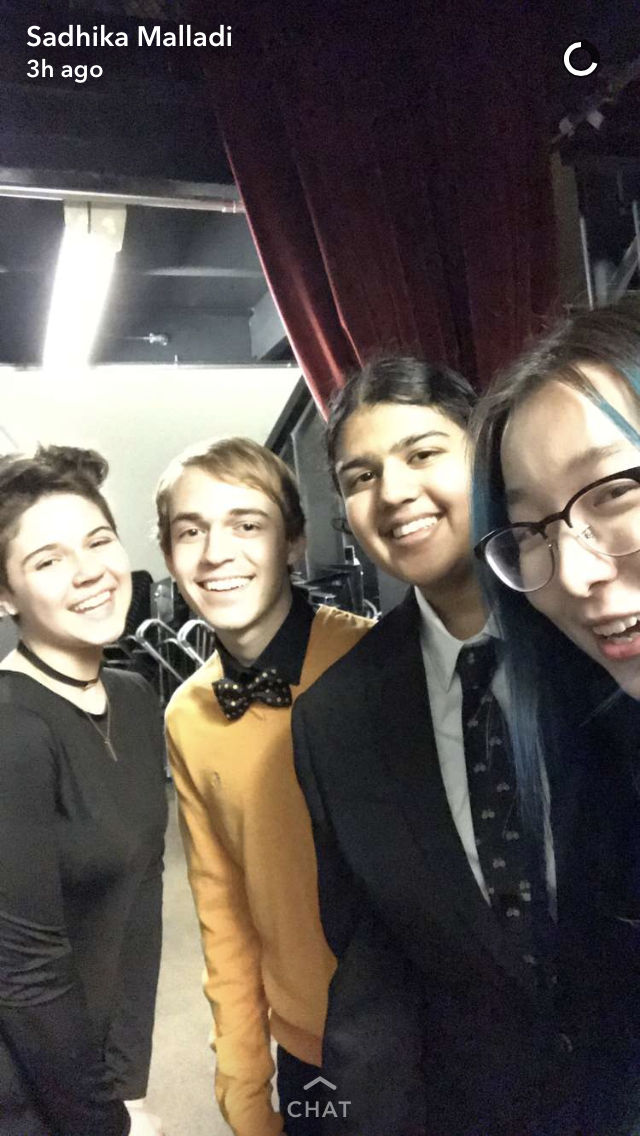 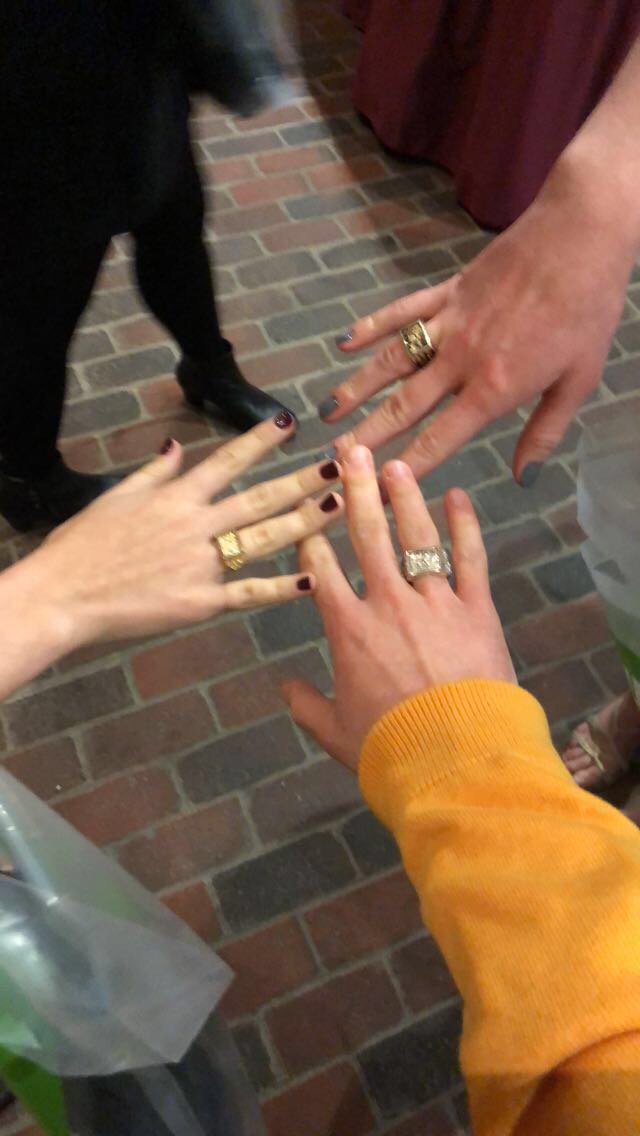 When we enter the stage, all I saw was a packed Kresge and all I heard was DEAFENING ROARS. Like it was SOOO LOUDD!

Luckily for me, my part of the presentation was first, so I got to get the nerve racking part over quickly. Here are pictures of Anya Q. ‘20 and I presenting the Hacker’s map!! And snapchats of me from my beautiful friends who complimented me on my yellow sweater!! 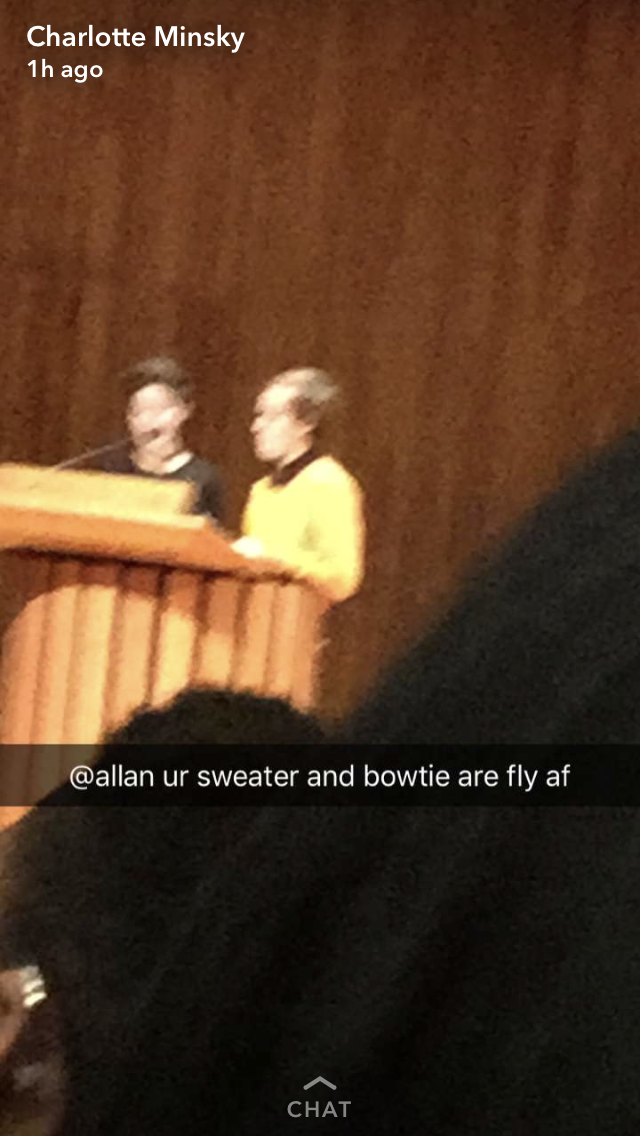 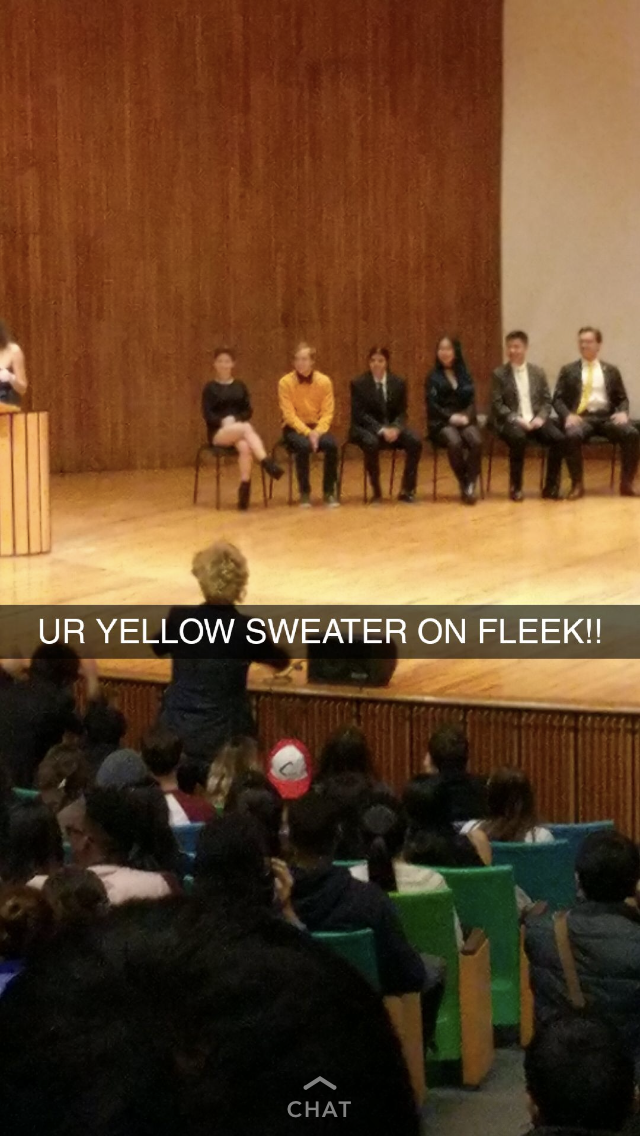 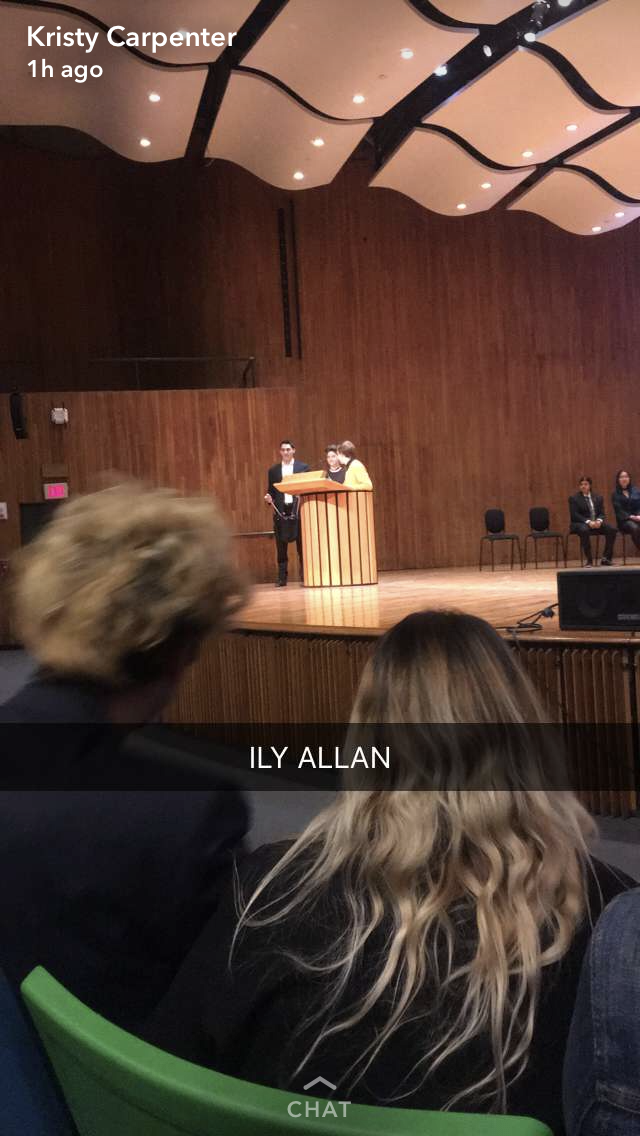 Unfortunately, because it was SO LOUD, we were barely heard. Part of our presentation was to describe how we have memorialized Senior Haus on our Hacker’s Map. So, I was very happy when Anya took charge and literally yelled with all her might to make sure that at least that part of our presentation got heard! All of our speeches word for word and designs are on our beautiful website (made entirely by web chair/god Sadhika M. ’20).

It was so crazy that through all the rest of the presentations, the volume was maintained at an extreme high! Some of us were better heard than others, but overall Kresge was so loud that we were mostly muffled out. It was honestly great to see so many members of our class as enthusiastic as we were, but I do wish they heard us more.

After Ring Premiere ended, Jeff took us out to a very fancy restaurant! To say the least, it was absolutely delicious… like don’t even get me started about the dessert. It was great to just sit, relax, eat, and actually talk with each other in a non-meeting environment! A fabulous way to end the night!! 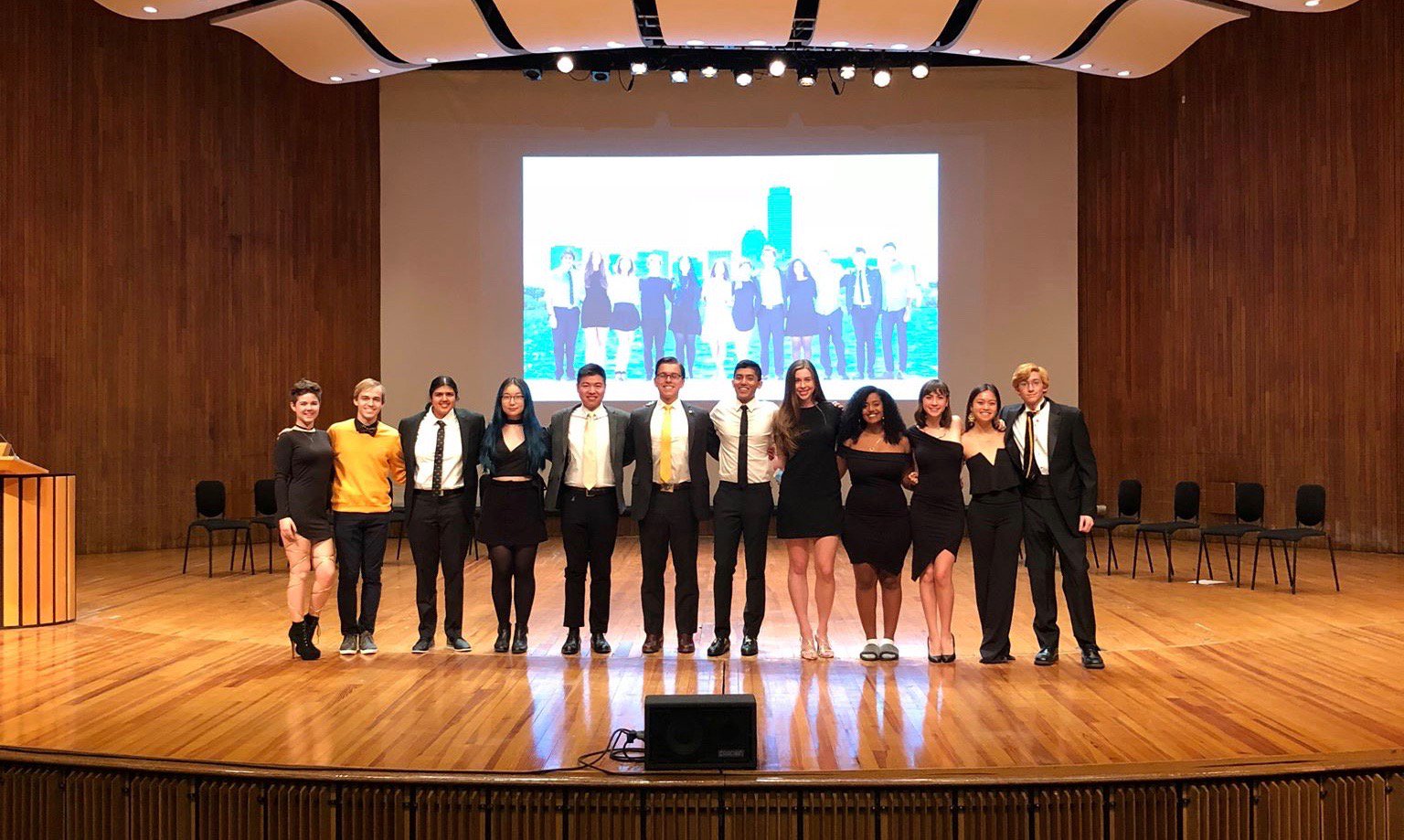