gaze upon my son

This semester I’m taking 4.110 Design Across Scales and Disciplines, a class inspired by Charles and Ray Eames’s short film “Powers of Ten” which features weekly lectures⁠01 Last week we heard from Skylar Tibbits of the Self-Assembly Lab; this week we heard from David Sun Kong of the Community Biotechnology Initiative. from designers in various disciplines who work at different scales and lab sessions where we refine our own design skills in a series of increasingly complex assignments. As someone with no design background at all and minimal interest in design, I’m taking this class as an intro to the field and also because I need one more HASS-A⁠02 art class to complete my distribution. The first assignment is called “Critter”: the goal is to optimize a tennis-ball-sized creature through a series of additions or deletions in physical traits or behaviors over the course of fifteen days. At four separate times, the TAs for the class emailed out “emergencies,” or sudden environmental changes to which our critters must adapt. The assignment isn’t about making something that would exist in reality or even evolving something realistically; I think it is mostly a creative exercise (so don’t make fun of the stupid science I’m doing here). Here is my critter.

Day 1: Web⁠03 Disclaimer: I cannot draw well at all and I only have Sharpies. Please excuse the sloppiness and my refusal to learn how to do drawing on a computer. 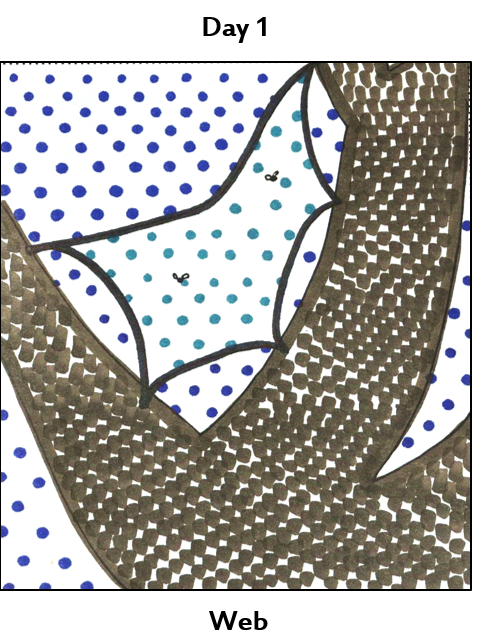 My critter begins as a simple translucent layer of tissue that attaches itself in the crooks of trees using anchors that also function as siphons to tap xylem and phloem in the tree. The web secretes enzymes and a sticky substance which traps and digests insects that fly into it. Webs are prone to accumulating indigestible dirt and debris, which makes them more visible and less capable of trapping nutritionally valuable prey. 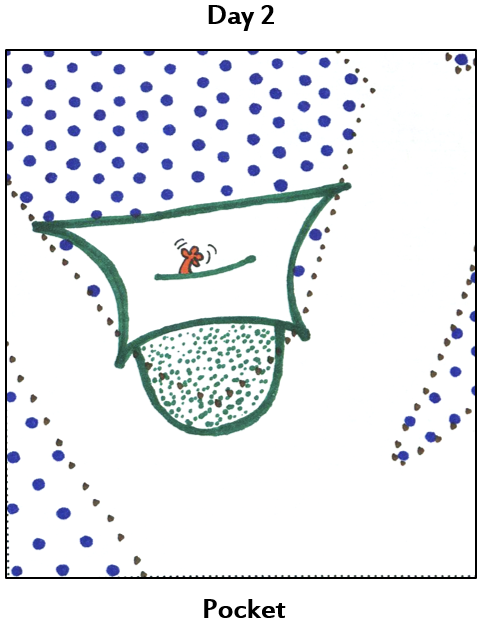 In transitioning from a Web to a Pocket, the critter has developed increased bodily elasticity that allows it to dip in the middle, forming a pit in which it can trap and digest slightly larger creatures (maybe even some small critters) that fall in. Eventually, the Pocket bursts open due to its contents exceeding the capacity of its central pit. These bursts typically result in the birth of one or more additional Pockets—pieces of Pockets can regenerate when they are ripped apart (like how cutting a starfish up can give you more starfish than you started out with). Nevertheless, sometimes the bursts result in two non-viable fragments, unable to form a necessary attachment to the tree and incapable of creating that crucial central pit. 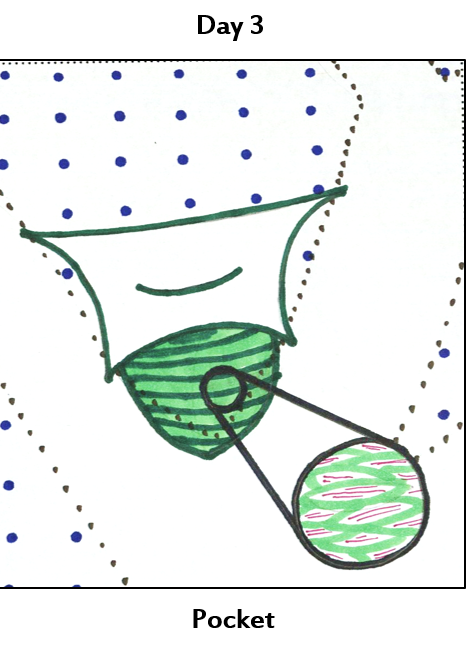 Pockets have now developed a layer of muscle. This allows them to compact their inner contents to reduce the incidence of fatal bursts; additionally, the muscle confers the capability to move randomly in search of a spot to anchor on the tree. Pockets have no capacity to sense, so they must find an anchor spot in a very brute-force/trial and error manner.

Emergency! A volcano has erupted relatively close to your critter‘s habitat! Though they are far enough away to not feel the effects of flowing lava, ash and debris blow up into the atmosphere for days, creating a dense haze and dimming the sun. 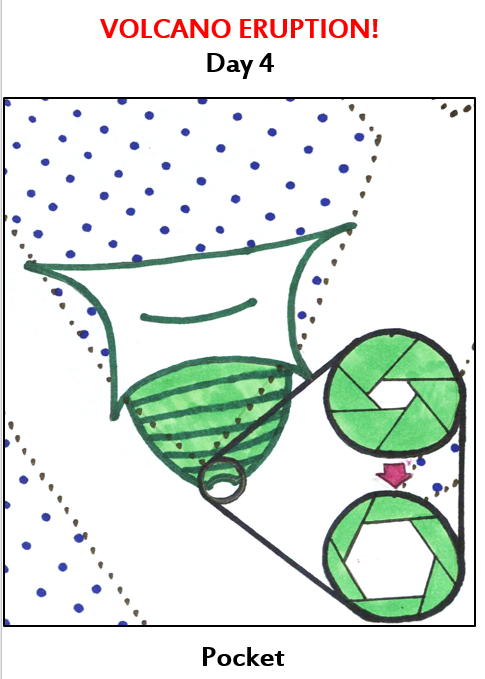 A camera-aperture-inspired hole has formed at the bottom of the Pocket’s pit. This allows the Pocket to release its contents if it collects too much ash and debris. This is also advantageous for the pocket to release indigestible material that accumulates over time and causes bursts. Without bursts, however, Pockets cannot reproduce. 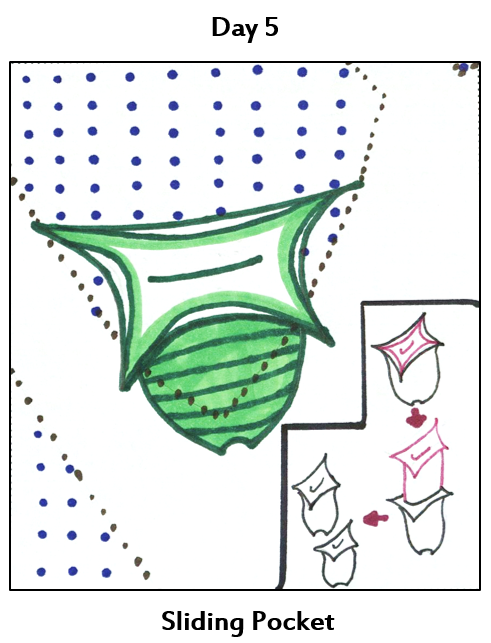 Pockets, now Sliding Pockets, have begun to reproduce by replicating themselves on the inner lining of their pits and then sliding off of one another like a couple of plastic cups. This creates an interesting mother-daughter dynamic because Pockets that slide off often anchor near to their daughters due to incomplete detachment of their anchor points. The daughter can “feed” the mother by dropping prey or water into her central pit. 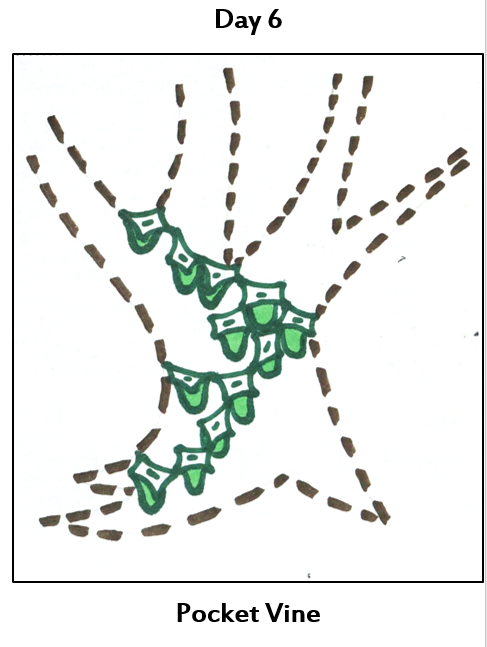 Attached systems of mother and daughter Sliding Pockets form colonies that stretch up and down tree trunks. The “vine” acts at times as a single organism, with lower, well-fed Pockets contracting to expel trapped prey into the pits of higher up pockets that have begun to wither. Ground critter bones have been found in Pockets as high as ten feet from the ground.

Emergency! After the volcanic disaster, a dense smog has settled in the atmosphere, with no signs of clearing in the next few weeks (months? years?). The smog is believed to have been caused by the volcanic event, but has now trapped other pollutants/gases being produced by local industry. Along with decreased access to sunlight, the air has become too polluted to breathe without dangerous long-term health effects. Some critters have started making masks for themselves, but some have started to evolve… 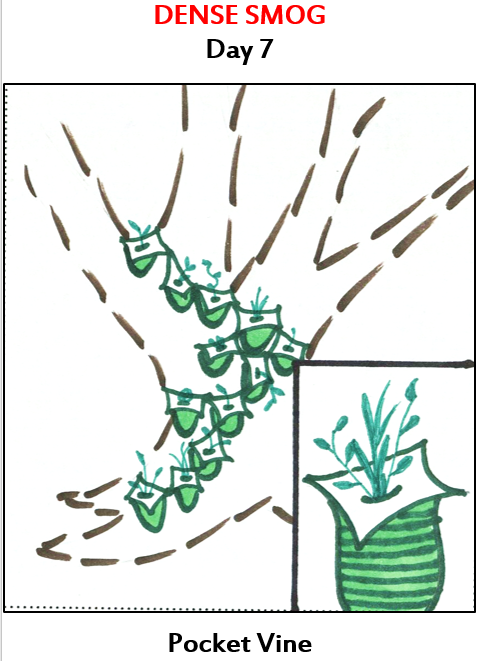 Pockets that have trapped seeds now begin to secrete nutrients that allow the seeds to grow. Plants growing in the central pit filter the air around the gas exchange membrane of the Pocket’s central pit, allowing the critter to continue to breathe despite the smog. Some pockets have been observed releasing their cultivated plants onto the ground, causing tiny green plant patches to spring up at the bases of Pocket-colonized trees. 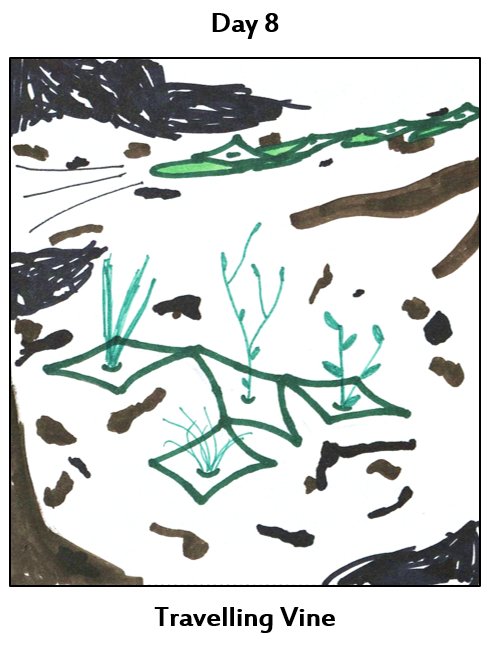 Using their muscles, the Pockets have begun to exit their home trees and creep along the ground where prey is more plentiful and the air is slightly cleaner. In the process, some Pockets end up burrowing into the ground to set up traps for other critters who come along to eat the plants living in their pits; any critter that approaches is vulnerable to falling in. Others crawl along the forest floor, clearing paths in the ash and debris.

Emergency! Sun finally found its way through the smog. Air has suddenly become translucent again. Even though visibility has changed, the critter found himself/herself/itself laying down in vastness of debris, accumulated waste. How does the critter accommodate to live within the scrap? 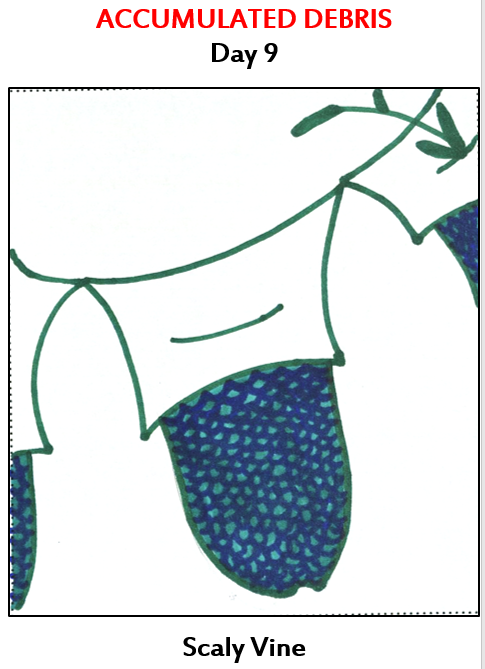 Well, my critter doesn’t have eyes, so visibility doesn’t matter much. The accumulated waste, however, has proven problematic for my soft, smooth chains of Pockets. To protect against getting impaled, they have developed a layer of scales⁠04 if only I could design across them as armor. 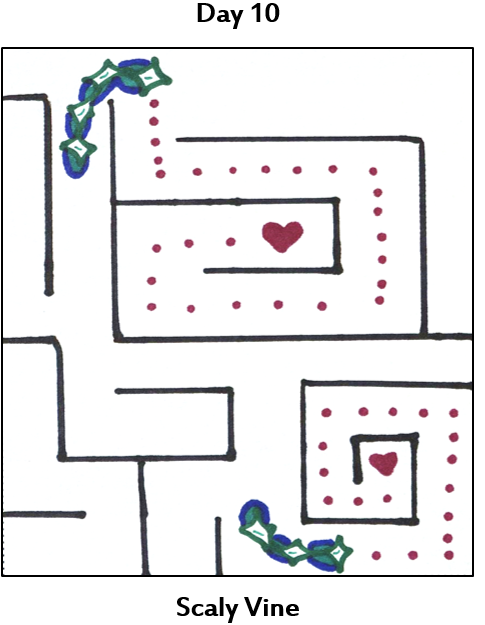 The Scaly Vine has developed olfactory capabilities to guide it through a minefield of predators and debris. This allows it to hunt actively, rather than relying on prey to fall into its pit. Additionally, because the Pockets can now smell other Pockets, they are able to avoid one another and prevent getting tangled up like rat kings. 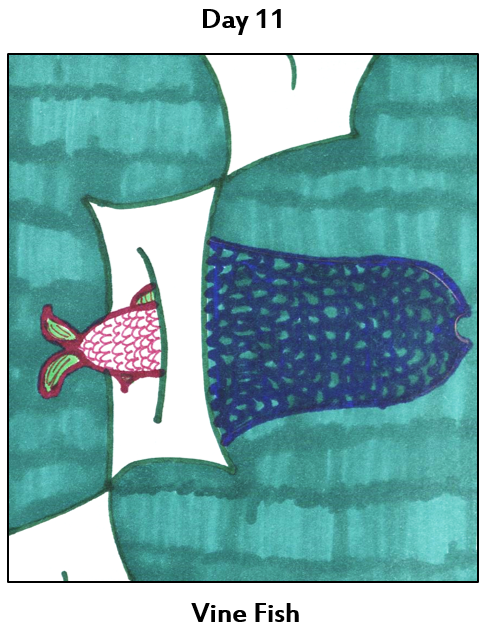 The Scaly Vines of Pockets have used their sense of smell to navigate toward bodies of water, where they are able to rinse themselves of ashes and dirt, hide from predators, and eat critters that live in the water.

Emergency! After evolving among waste for a few days, your critter has been captured by another living being, and taken 3,000 miles away. Your critter’s new habitat is fundamentally different from what it used to be:​ the space allocated to your critter is limited, and the captor only provides specific resources. How does your critter react to captivity? 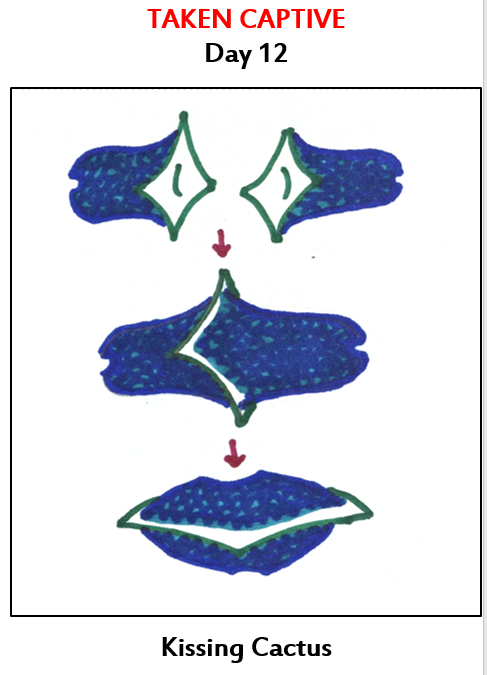 My critter was carried from the forest to the desert by some kind of bird. (What a shame; it was just getting used to swimming around in the water.) To keep from drying out, pairs of Pockets have begun to fuse together at their main opening. Somehow, the fused Pockets are able to exchange bits of DNA to one another when in this “kissing” conformation, increasing genetic diversity in the population. 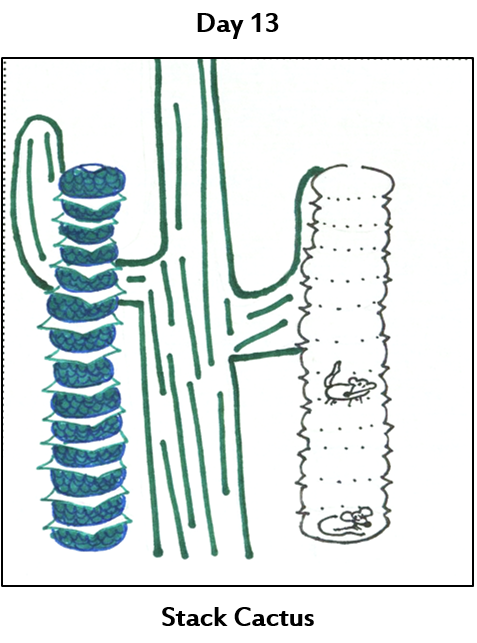 Pockets, in their duplex form, have begun to cope with their captivity by reattaching into colonies. This time, the connections form between “apertures” such that they stack into towers, or “Stack Cacti.” Critters that scale the Stack in search of water or bugs to eat can be trapped in the topmost chamber of the colony; the colony works in concert to distribute the swallowed critter to each subunit as determined by its nutritional needs. 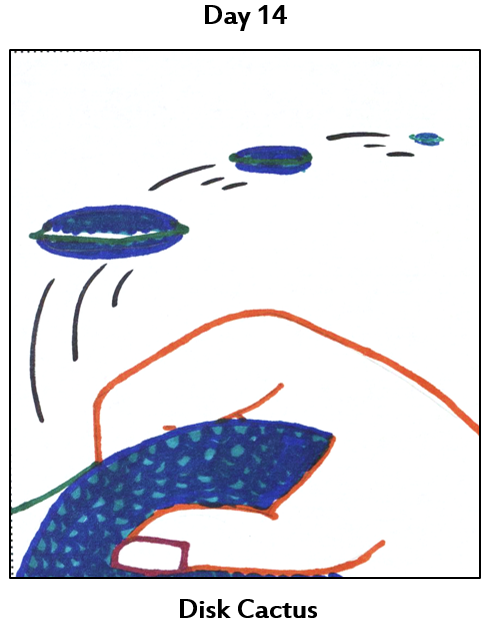 Other critters, who have developed hands and a desire to “play,” have taken a liking to my critter. They rip Disks off of their stacks and toss them like Frisbees around the desert. Disks are now dispersed throughout the desert, free to roam if only they could. 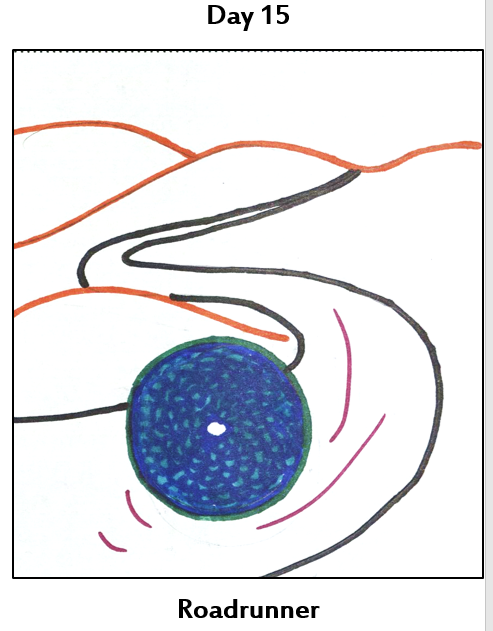 Lonely Disks, in search of others, food, water, life, experiences, feelings, new ideas, something to break the monotony of the desert, have flipped onto their sides and now roll through the desert like tumbleweeds with a sense of direction. Hopefully they find what they’re looking for.

Some notes on the process:

I wanted my critter to be a little different, so I made it more of a plant than a furry little mammal (what tends to come to mind with the word “critter”). The instructors suggested starting with a very simple critter to have a lot of freedom in adapting it, so I started with a literal sheet of cells.

I also wanted to avoid making it like a pet or anything you could easily look at as human-like. To this end, I refused to give it eyes, made it more radially symmetric than bilaterally symmetric, and didn’t give it limbs.

It would be too easy⁠05 and also maybe too obvious to simply declare “Now Critter can walk.” Therefore, I tried to make my changes incremental enough that I could conceive of them happening in nature like that.

This was a fun little exercise, though I hope the scaly bastard doesn’t haunt me in my dreams for making him Like That.