Maybe it’s a little existential, but at the back of my mind, I am always thinking about what I will leave behind once my time on earth comes to an end. It would be great if I left more than bones and a carbon footprint at the end of all of this.

Now I’m not saying that I’m dying any time soon, but my time here⁠01 In LiGhT oF rEcEnT eVeNtS rElAtEd To ThE cOvId-19 CrIsIs, read: <em>there</em> at MIT has come to its end. And I do not want to be just an entry in the registrar’s records, a person who exists on paper but not in living people’s lives.

I am sad about leaving. What has made me less sad is thinking about the little “marks” that I am leaving behind: evidence, however ephemeral, that I was here and I affected MIT in ways other than bringing down the average on almost every exam I took. Here is the far-from-comprehensive⁠02 I only included stuff that I have photographic or other evidence of list.

A handful of murals. In addition to the elephants I painted on my door sophomore year, I put some other stuff on the walls. A frequent collaborator was my friend Ethan M. ’20, who did some excellent tape work.

me and ethan painting an F in the Fentry stairwell
the finished product
the burning giraffe in F32 is one of mine
the noid (I had a lot of black paint)
the bit of wall next to my old room: I am not responsible for the upper Squidward
ethan did the letters, I did the gadsden flag
the wall next to my most recent room, which I intended to add more stuff to
this is an ethan original
another ethan original, very cute
As I rushed to take pictures of the murals on my move-out day, I considered leaving out Ethan's unfinished Space Ghost tribute. But I couldn't do that.

A $25 waffle-maker. There’s a reason this one was left behind: just because it can be cooked in a waffle-maker doesn’t mean it should be. I hope someone uses it. 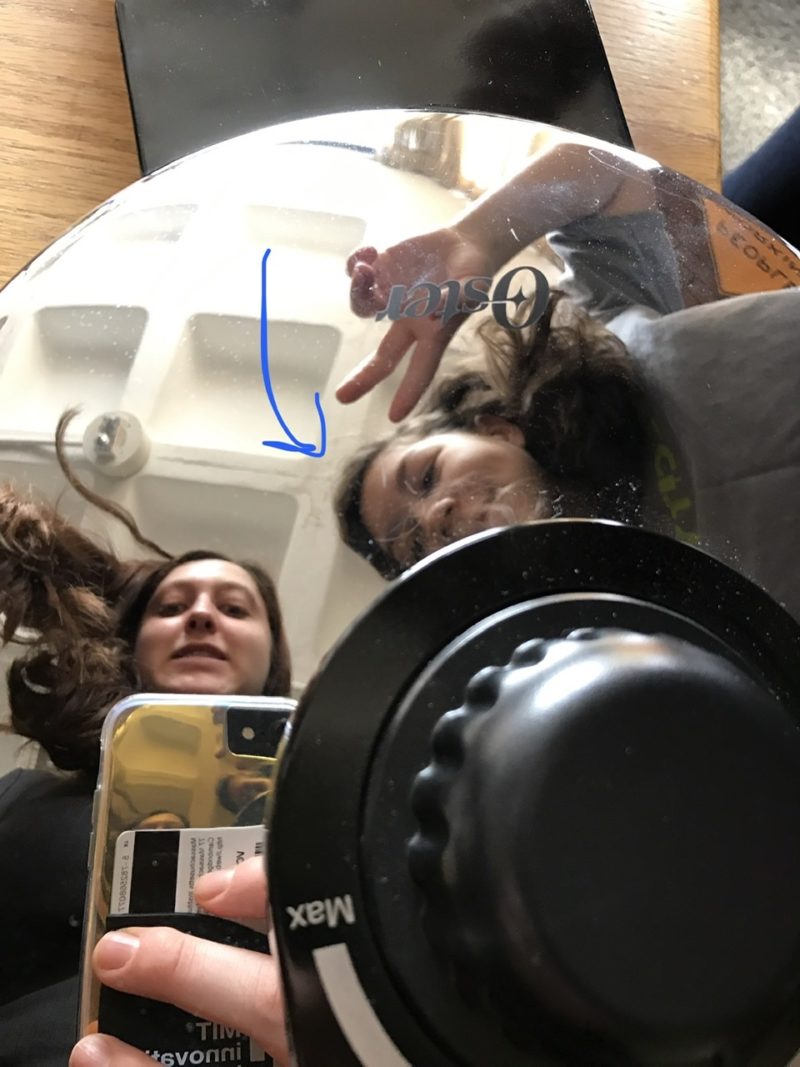 A brief cameo in an SFS video. Not sure why I did this.

A tombstone for MacCon, the deceased MacGregor Convenience store. The 2020s are perhaps the only ones who remember MacCon and we will carry its memory with us when we graduate. 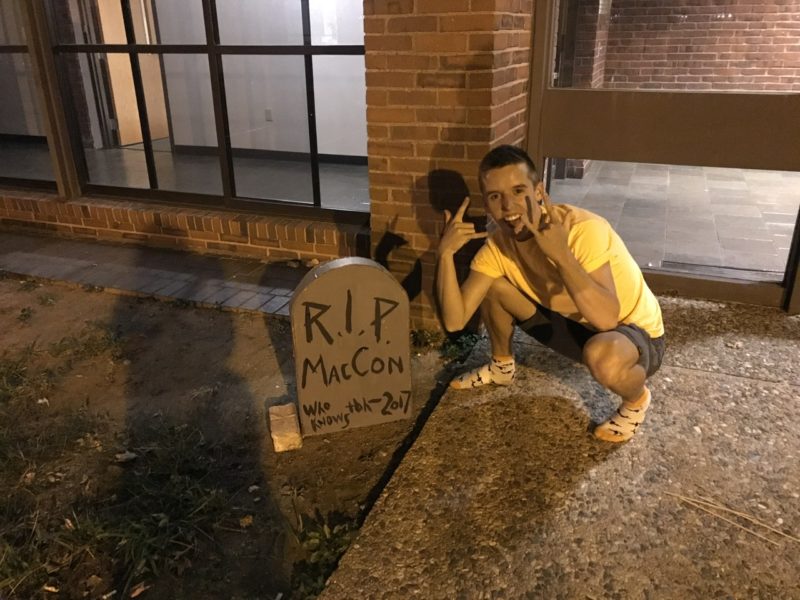 A solidarity banner for the deceased(?) Senior Haus. Ethan and I took it upon ourselves to paint our own banner back when everything went down. I think someone called the MIT police on us when we were trying to install it on the balcony of E entry, because a cop car showed up and just kind of waited there. We ended up hanging it in the window of our main lounge, visible to anyone walking down Amherst Alley. It’s now rolled up in a closet somewhere. 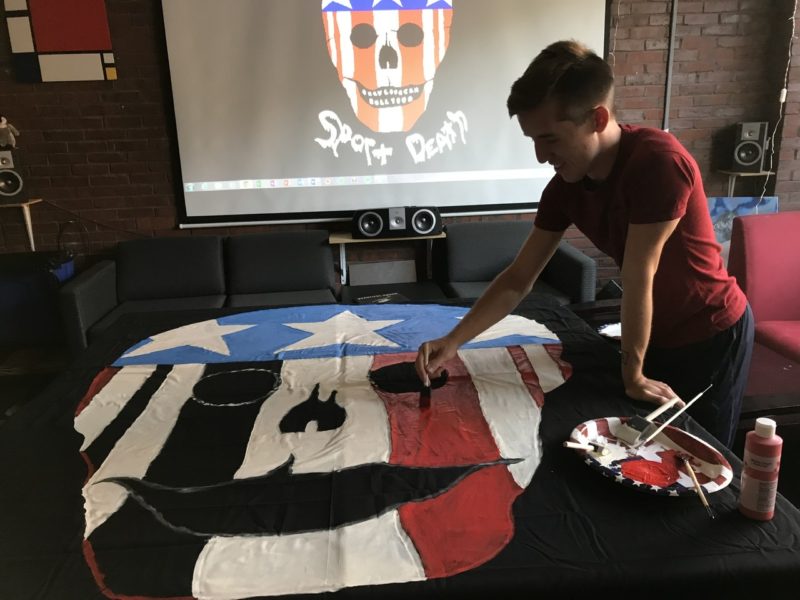 the teeth were the hardest part

A failed mailing list. One day, Ethan (the same one who has been in almost all of the above items) remarked on how he would gladly venmo someone a surcharge to buy him a Diet Coke from Verde’s and bring it to MacGregor. This was before MacG had vending machines but after MacCon had shuttered its glass door (see above). I threw out the idea that there should just be a free-food style mailing list but for people willing to do odd jobs. Thus spawned the mailing list “odd-jobs.” It flopped. There were a few funny requests that were sent, though.

[Odd Jobs] kill a bug for me PLEASE in central square where tosci’s used to be PLEASEHi,
I am super super afraid of bugs, and there is a bug currently in my room for the past couple of days. IT’s been wrecking me– couldn’t sleep in my room and had to sleep on the couch because I am unable to kill it. The bug should be super easy to kill. It stays in one place for long periods of time, but I am just unable to come close enough to kill it because I am too afraid. Please help me. I will pay you, buy you a meal, love you unconditionally, give you my firstborn child, ANYTHING, just please come help me this bug has been wrecking my life and my sleep. 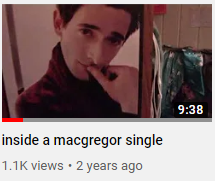 this screengrab is so tiny

An unofficial CPW event. There was a pretty hyped up fight between Floyd Mayweather and Conor McGregor that happened during REX⁠03 Residence EXploration AKA the time before orientation where you try out other dorms to see if you want to move somewhere else 2017. This email got at least 40 people packed into the Flounge to watch sweaty men pummel each other. 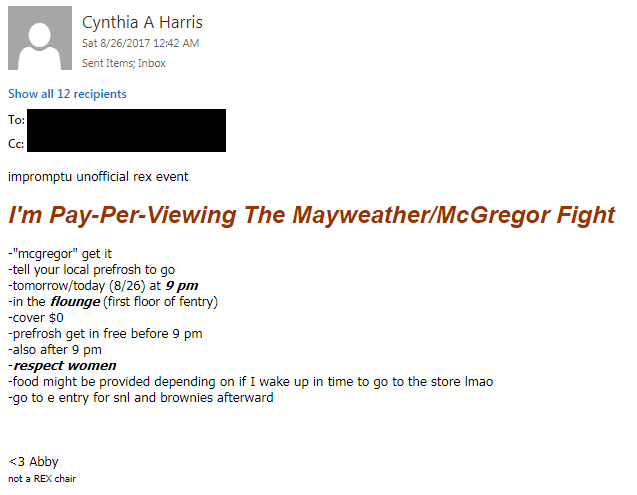 Bringing late night acid to WMBR. This was a message from a listener who appreciated my acid-house-themed special edition show. 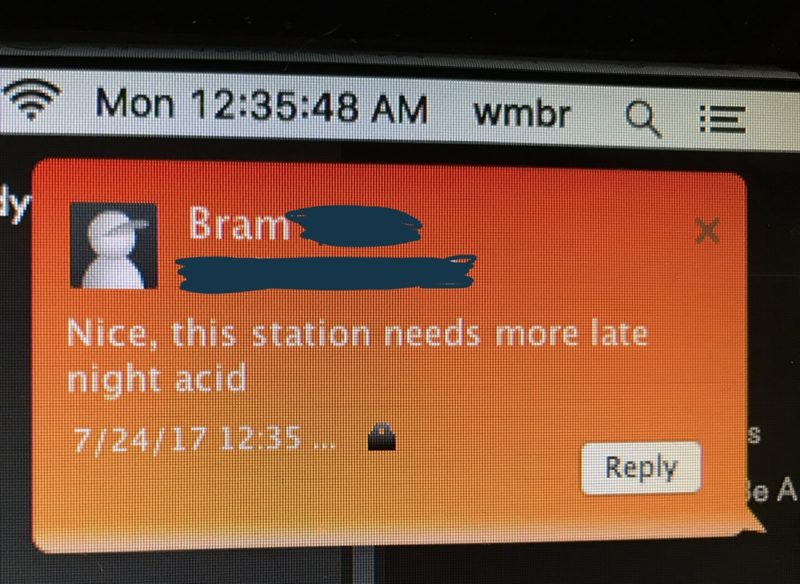 WMBR DJs love it when you text them

My name outside the Walker lab in Building 68. I’m going to miss my lab. 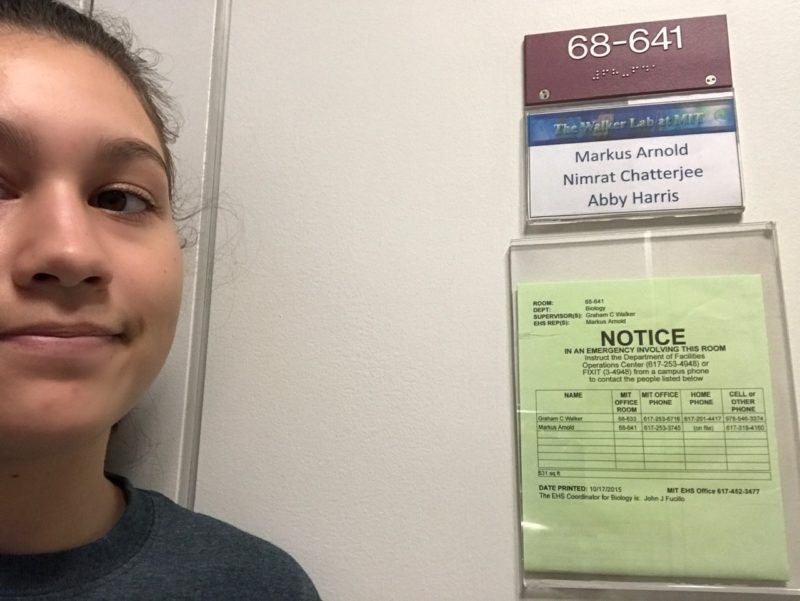 Book-sharing among Concourse⁠04 a freshman learning community that was great but wasn't for me (disputable). I’m not saying that I invented this, but in fall 2017 I sent an email to the Concourse ’21s offering my old books to them for free.

Hello friends and airport intersection inhabitants. Having completed CC.110 becoming human: ancient greek perspectives on the best life and having determined that the examined life is not the best life for me, I have a pile of books that I would like to pass through the veil. Their names are Politics (Aristotle), Nichomachean Ethics (Aristotle), Four Texts on Socrates (Plato and Aristotle), Symposium (Plato), and Republic (Plato). Third person to reply gets them for $0. With love and squalor, Abby

Two years later, I was working desk at MacGregor when someone came by to drop off Concourse books for someone else. 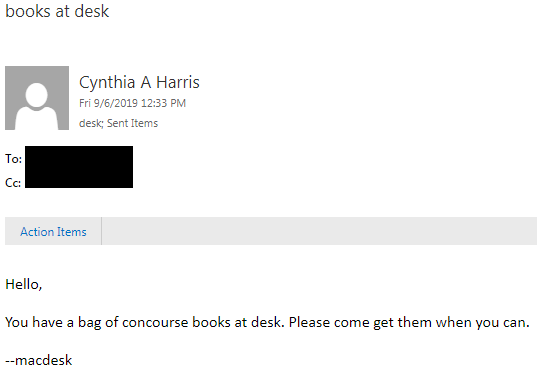 I didn’t think about it for a while, but then it hit me: these could be the very books that I passed down. Maybe I started something. I didn’t check the books for my name in the front cover out of respect for the recipient’s privacy and also because I wanted to keep the magical idea alive. 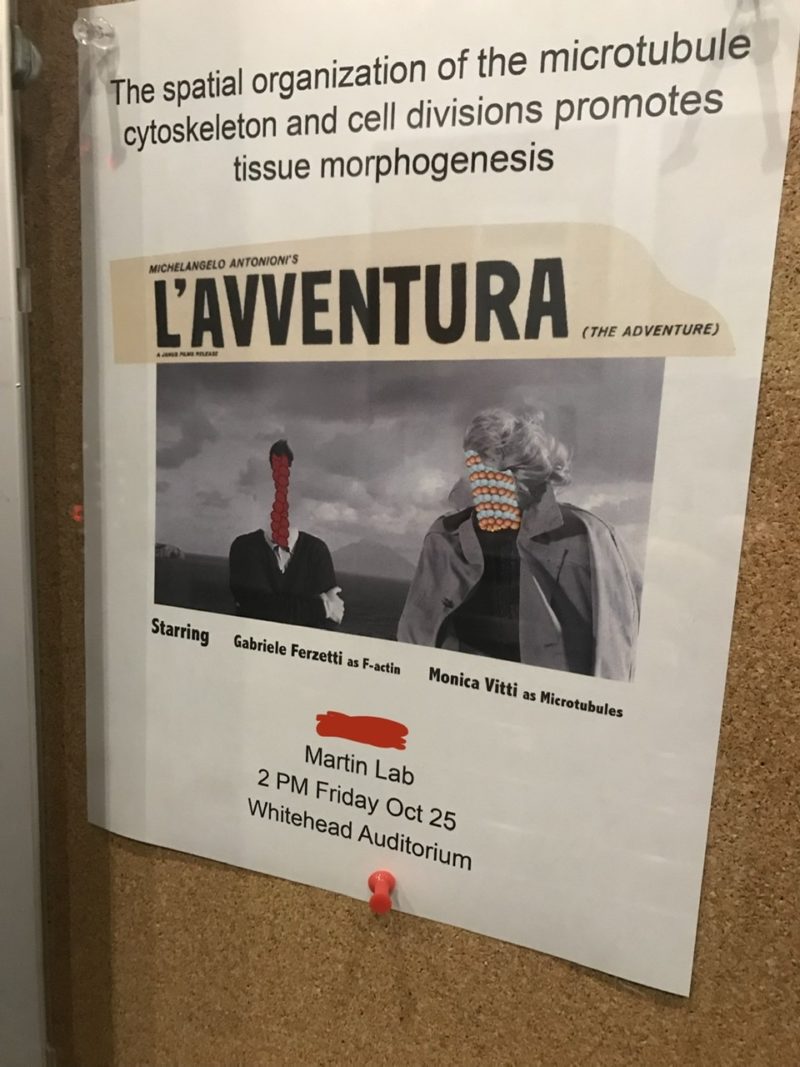 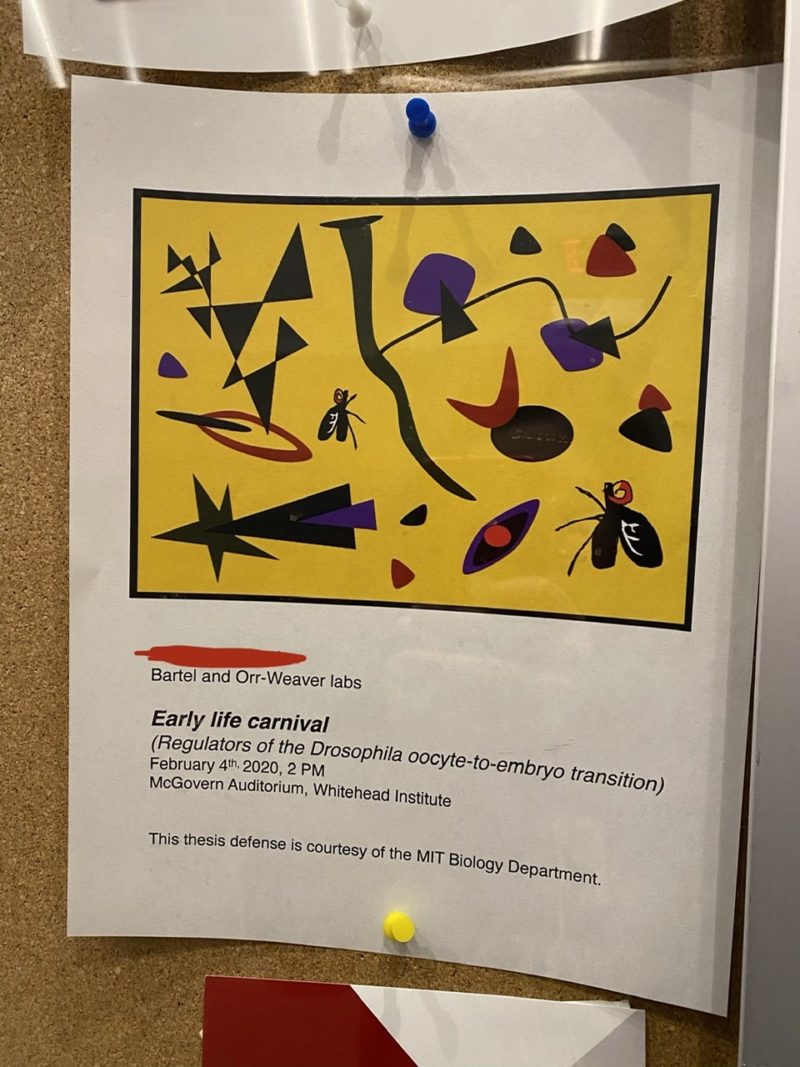 Dear Abby, Thank you for taking the time to provide SFS with feedback on our new award letter for first year students. You’ll be happy to hear that we did incorporate many of your suggestions into the final award letter that we presented to first year students. The final order in which the award letter is presented is as follows: Estimated cost of attendance, your MIT overview (grants and scholarships), estimated net cost, family financial responsibility (in this section we did essentially what you suggested and showed both the $2000 summer savings expectation and the $3400 student employment as the Student Contribution), and estimated term bill and additional expenses (in this section we do call out that the cost noted does not include MIT extended health insurance, and talk about needing to factor that in as an additional cost if students will not be waiving the extended health insurance). Some of the challenges that we faced when working on this were that we have to adhere to federal mandates regarding some of how the award letter is organized and terminology used. We received positive feedback from parents and students on the award letter and we are happy to have been able to provide more clarity to this process. We will continue to monitor reaction to the award letter and make necessary tweaks as appropriate.

A parting message written in The Book⁠06 a book where DJs/engineers write important updates about equipment issues, running for general manager, becoming OTA engineers, etc. at WMBR, from a scene not included in that video I made as an intro to WMBR/documentary of the blur that was the week of March 8, 2020. Can’t help but plug it once more because I put several hours into editing and assembling and subtitling that thing. I don’t remember what exactly I wrote, but it was a heartfelt good-bye. 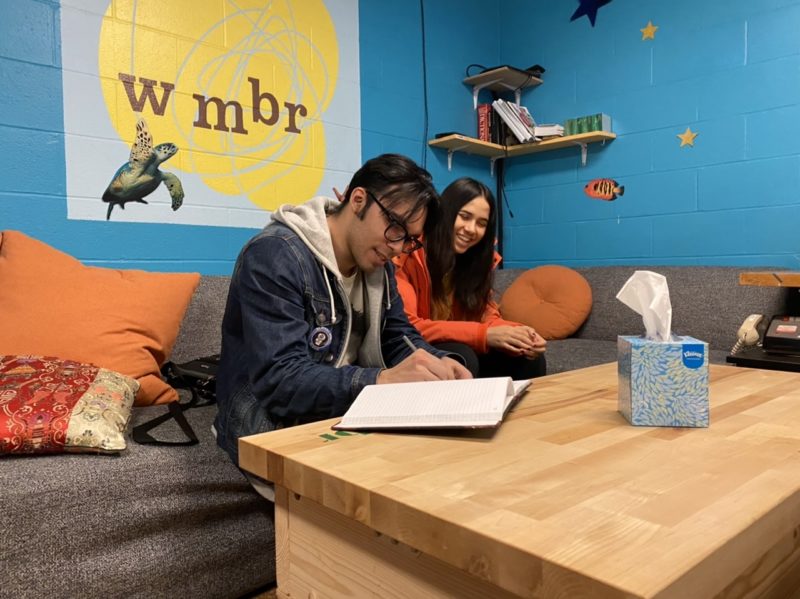 Hector and Jackie signing off their own farewells in The Book

Almost 60 posts on this very site. I went back to look at some of them and they’re not as bad as I remember.

But then of course there are the marks that MIT has left on me. There is no way you can go here and not change just a little. Here are those changes that I’m aware of.

A greater appreciation for low-level absurdity. I wrote a whole post about this, but my time at MIT has been plagued by little cursed incidents.

facts
:o
I don't want to get into why I made this image but it was for class

A cure to my freemium gaming obsession. I played a lot of Tiny Tower, Pocket Planes, Pocket Frogs, and Simpsons Tapped Out in high school. I liked assigning tasks and optimizing in-game currency flow, but it got to where I would plan my life around these apps. I never spent any real money on them, but I thought about them constantly. You will find none of those apps on my phone these days. MIT will give you real tasks to complete and assign to other people and optimize and troubleshoot. The Institvte makes managers out of everyone, even leadership-averse people like me. 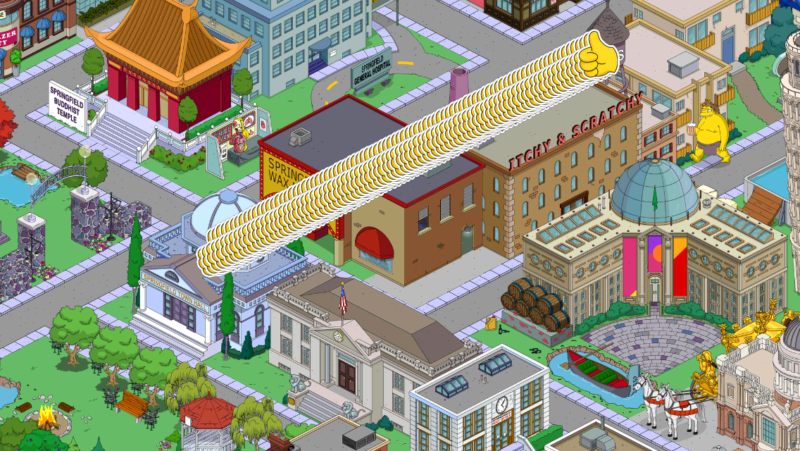 A literal mark around my right ring finger. I stopped wearing my Brass Rat when I got home in March, but I’ve been wearing it every day this week so that it will feel ceremonious tomorrow when I get to flip the ring around. 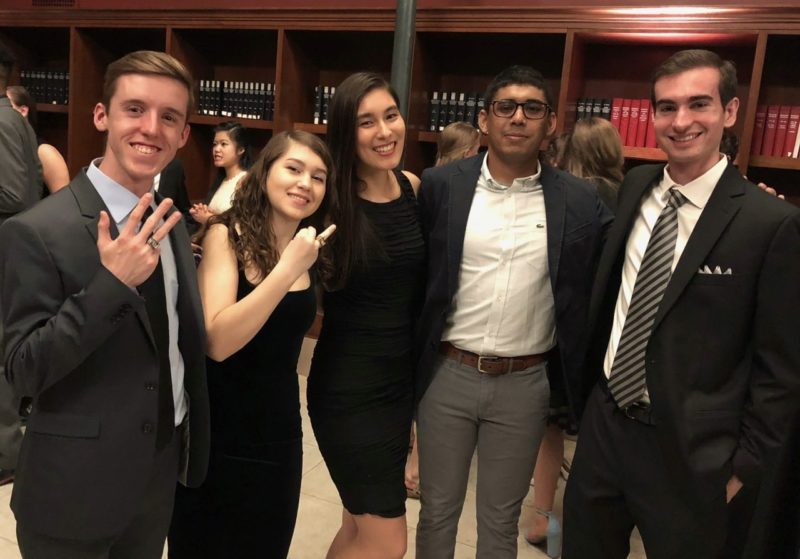 Door vandalism. I took these move-out reminder door-hangers off of some doors and repeatedly hung them on Jason P. ’20’s doorknob every time he took one off. (I like little pranks that involve making the victim feel like they’re losing it.) He returned the favor with a hearty “F U” installation on my door. 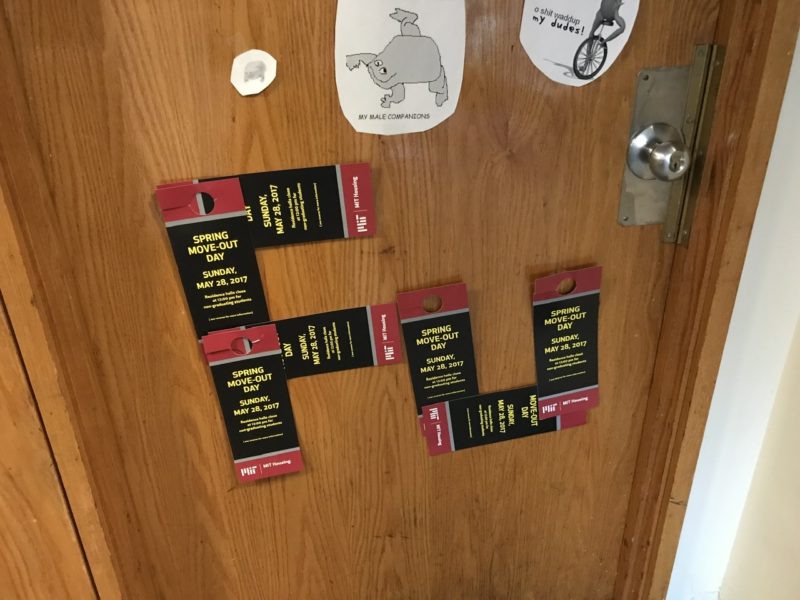 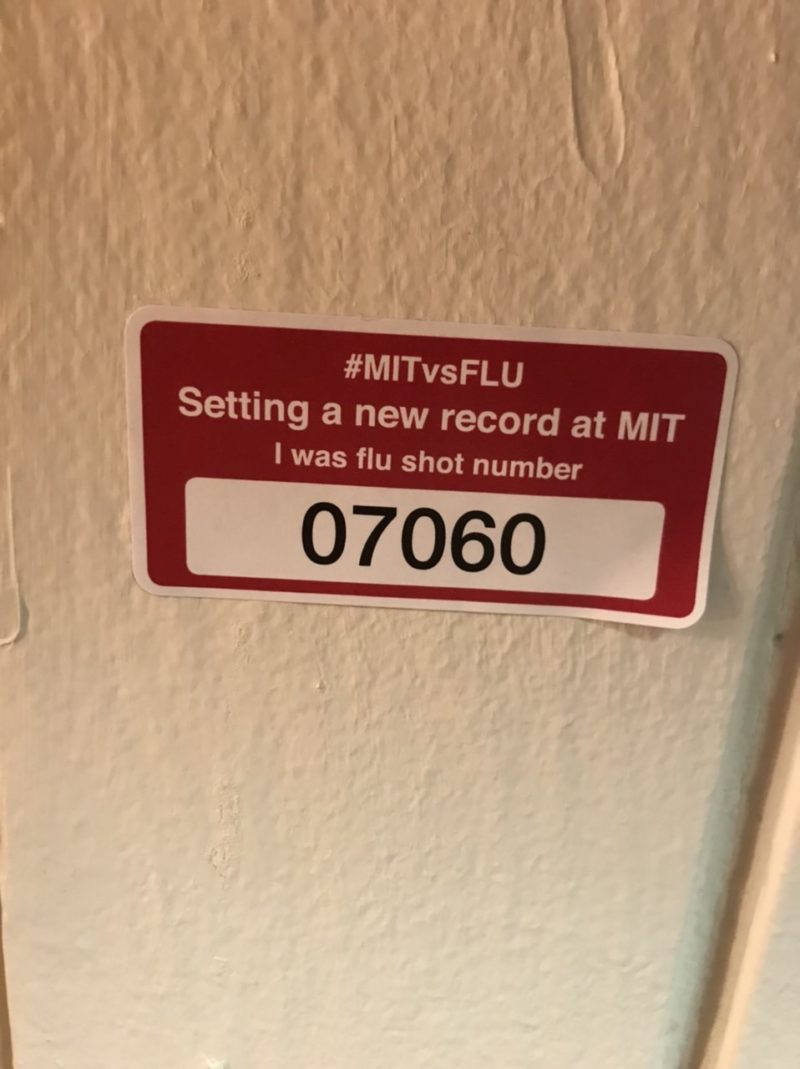 Potential asbestos poisoning. To be fair, any building from before 1978 is probably full of this stuff. 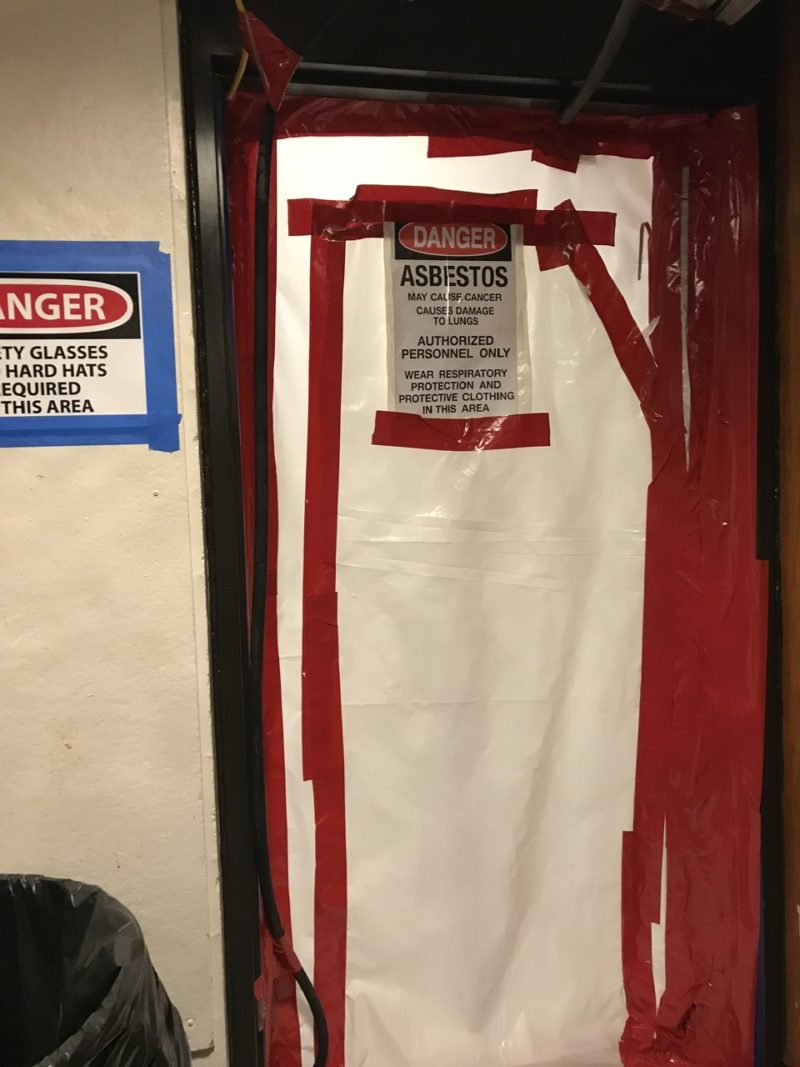 Great calves. I already had soccer legs⁠07 so much of having good calves is just genetics when I started in Fall ’16, but walking around Boston and Cambridge all the time really gave me some definition, especially coming from a city where everyone drives. 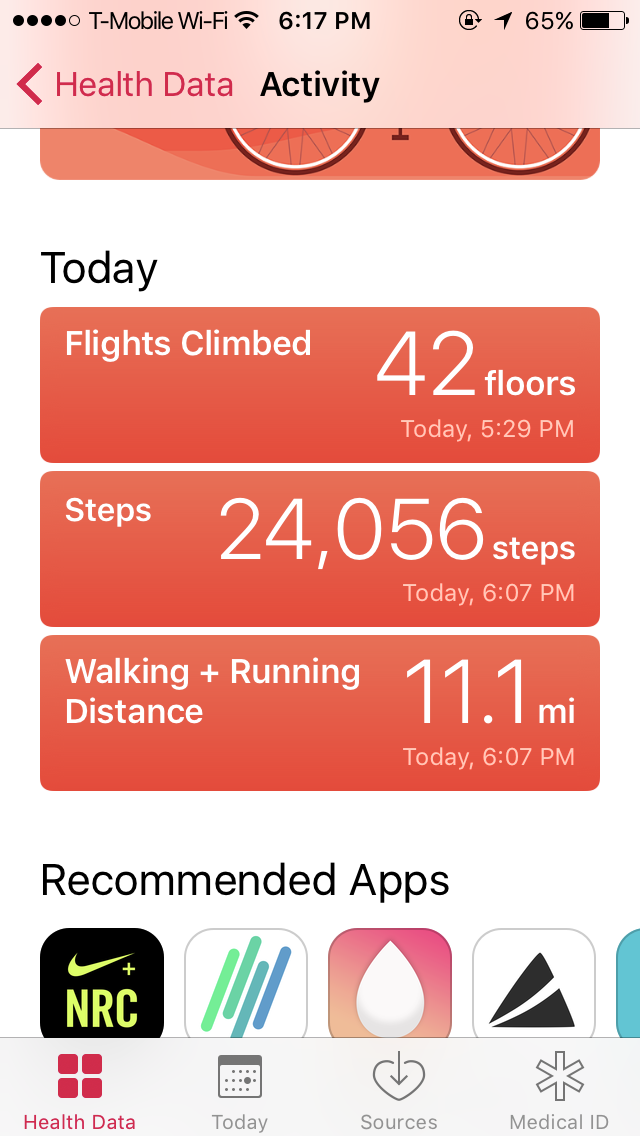 A love of the trader named Joe. The first Trader Joe’s I ever went to was the one by Micro Center. I’ve been a believer ever since. 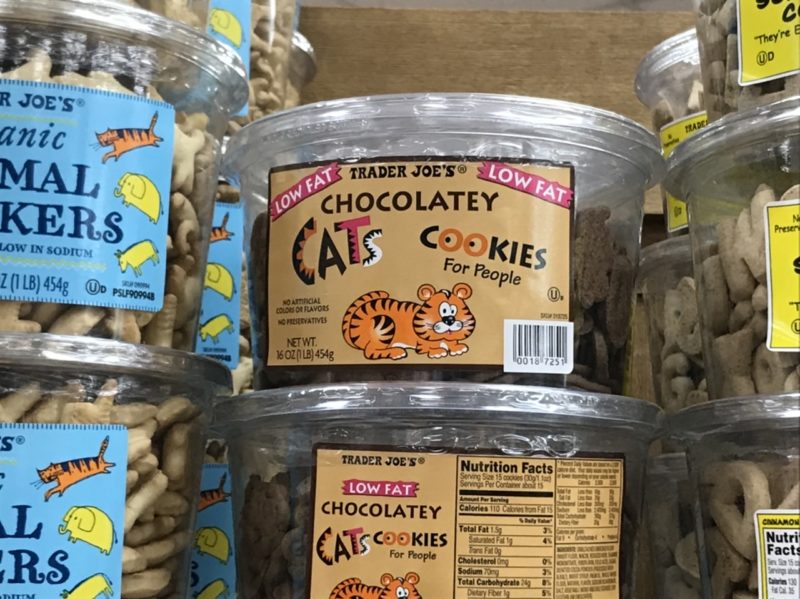 An understanding of why people take group pictures. I don’t like when people take pictures of me. There are probably fewer than 20 photos of me as a child, and they all look like this: 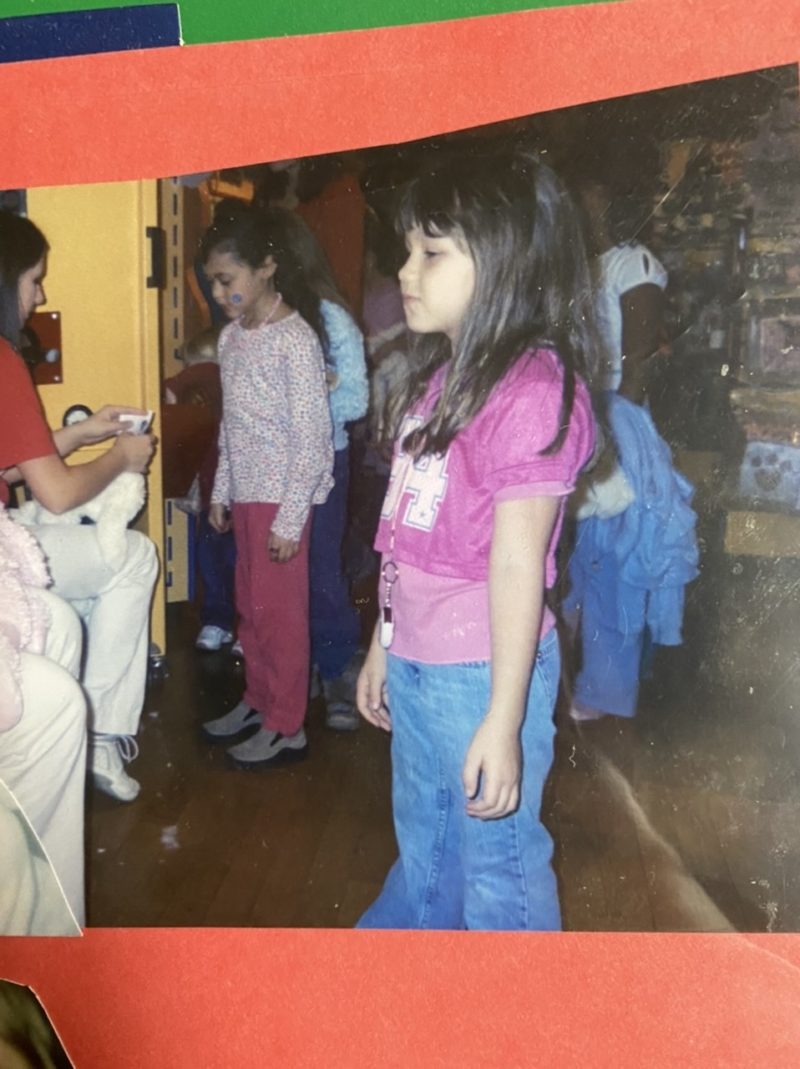 bangs, tamagotchi around my neck, flare jeans, killing it at the build-a-bear workshop

But then again all my pictures look like that even now.

my last-minute costume for the senior boat cruise was “beatnik”

I don’t have many pictures of me that I can look at to remember freshman or sophomore or junior or senior year. The ones that I do have are group pictures. So group pictures have become artifacts of my personal history, and I am filled with regret that I won’t get to take one with my friends at graduation.

posing in Greece
posing with my leg
posing a threat

So that’s what me and MIT have exchanged over the past four years. There is so much I did but so much I didn’t get the chance to do. Maybe I’ll be able to experience those things vicariously through the blogs, like I did junior and senior year of high school, like some of you are doing right now.

I’m Abby, and I’m not as cool in person. I come from kudzu-covered Birmingham, Alabama, and I’ve got some adjusting to do. My interests include watching the same movies over and over, texting back too late, being uncomfortable, wearing jackets when it isn’t cold, looking angry, chewing gum, s…
Keep Reading