an occupational hazard, and how to manage it

Last Saturday night, I was in my kitchen, looking down at two Pyrex containers on my counter. On the left was slow-cooked chicken thighs; on the right was grilled chicken tenderloins. My goal was to decide which I would have for dinner. I looked to the left, and the right, and back again, unable to pick, unable to think about picking, for about ten minutes, before my phone rang and jerked me out of my stupor. A friend was in the area and asked if I wanted to get dinner.

Rejoicing that once again capitalism would treat the symptoms without curing the underlying disease, I said that why yes, that would be great. So my friend asked the natural followup question about where or what I would like to eat, brightly rattling off several local options. I paused for a beat, then a few more. “Uhh…” A solid minute of silence, broken only by more interjections of my own indeterminacy, passed by before my friend tentatively asked “hey – are you okay?”

That’s when I knew that decision fatigue had set in early this year.

Decision fatigue is a term from the behavioral psychology literature. It refers to the observed phenomenon that making decisions depletes your ability to make future decisions, either as well or, as in my case last Saturday night, at all.  It is not something I had ever experienced before I began my career as an admissions officer, but I’ve come to recognize it as something of an occupational hazard, like being bleary-eyed, or having a crick in your neck⁠01 I've been seeing the same massage therapist for five years. It's gotten to the point where she can tell when, and how long, I've been in committee by feeling which muscles are tight, and how tight they are. I am not making this up. from looking at an external monitor all day. I begin each reading season knowing that, from the moment I begin reading applications or serving in committee, my ability to make lots of decisions quickly and well is going to decrease. There’s no way to prevent it, only ways to manage it better.

It’s hard to manage decision fatigue for a few reasons. The first, and most obvious, is that it’s our job to make lots of decisions quickly and well; it is our job, in other words, to become cognitively exhausted, in the way that when I was a landscaper in high school it was my job to become physically exhausted.

There are things we can do to mitigate cognitive exhaustion: I’ve blogged before about how I structure my reading into a block schedule, with intense periods of focused reading broken up by intervals of noncognitive activities like cooking, cleaning, or exercising, and we take mandatory breaks during committee, buy low-glycemic index snacks to avoid spikes and crashes, and try to structure our non-admissions related work (like redesigning a website, for example) outside of reading season to reserve our cognitive capacity for what really matters. But at a certain point, it’s our job to make decisions, and thus to become fatigued by them, and we can’t avoid it entirely.

The second is that decision fatigue doesn’t observe work/life boundaries: making decisions at work reduces your ability to make them at home,⁠02 In fact, if these conditions persist, they can be profound and life-altering: in 2013, <em>Science</em> published an <a href="http://science.sciencemag.org/content/341/6149/976" class="broken_link">article</a> that found the extra marginal decisions that came with being poor, like needing to bargain-shop for commodities, cumulatively exhausted cognitive capacities, and disabled good judgment, equivalent to about a full night’s sleep, or 13 IQ points. and vice versa. Most admissions officers dread reading season weight gain, which comes not so much from being more sedentary but from decreasing ability to observe a healthy diet and say no to a bag of chips (or four). Meanwhile, life decisions feed back into work: a friend of mine has been sick, and I’ve been helping make a lot of medical decisions, and I’m sure that’s reduced my capacity to make as many admissions decisions at the same time.

This is one reason why I food prep and wear the same rotation of flannels and sweaters this time of year: to routinize my life as much as possible, a longstanding practice helpfully validated in an interview by President Obama, someone who had many more important decisions to make than me:

“You’ll see I wear only gray or blue suits,” he said. “I’m trying to pare down decisions. I don’t want to make decisions about what I’m eating or wearing. Because I have too many other decisions to make.” He mentioned research that shows the simple act of making decisions degrades one’s ability to make further decisions. It’s why shopping is so exhausting. “You need to focus your decision-making energy. You need to routinize yourself. You can’t be going through the day distracted by trivia.”

A third reason it’s hard to manage decision fatigue is because it’s initially hard to detect, because, in a corollary of the Dunning-Kruger effect, the same forces that exhaust your cognitive functions also exhaust the metacognitive functions that allow you to assess how exhausted you are. I knew that I was cognitively fatigued, but I didn’t realize the degree until that conversation on Saturday night. In my post on MIT and/as Marathon, I wrote:

When I was a grad student, I didn’t make time for sleep or exercise, or to eat right, and my brain suffered for it, because Descartes was wrong about dualism, and we must take care of our whole selves for any part of ourselves to improve. It is possible to overtrain your brain as much as you can overtrain your body. I’ve done both. Sometimes, knowing your limits is the only way you can expand them, like gently stretching a tight muscle rather than quickly snapping it.

The thing is, it’s usually easier to tell when your body is injured or exhausted, because it hurts and it can’t do things it usually can. When I went to the gym this morning and couldn’t finish my warmups because I was so physically tired from the last week, that was a sign that I shouldn’t do any more deadlifts, because my body was too tired to do them safely or well. After some difficulty with overtraining, I’ve learned to become better at listening to my body; I’m trying to become better about listening to my brain when it, too, hurts or can’t do things it usually can.

For me, a reset usual means yoga, food prep, laundry, ironing, and maybe some reading or a video game.⁠03 I used to watch football, but there's a bunch of reasons I try to avoid it now, so instead I have been on a big <em>God of War</em> kick. But then negotiating all the runic puzzles required too much choice, so I set it aside until I could get to a point of mindlessly murdering ogres again. But because of all this other stuff, I’ve been unable to observe my own change of activity, and I can feel that cognitive debt accumulating. My hope is that a few days at home for the holidays will pay down the interest and float me through EA Decisions Day in mid-December. I’d originally intended to catch up on a backlog of work over the next few days, but I don’t think that’d be listening to my brain like I’m trying to do, or doing what’s best for me (and our applicants) moving forward. This time of year, I need to be careful where I spend my spoons. The backlog can wait. That’s why it’s a backlog. I’ll try to eat a lot of turkey, read some Earthsea, and make as few decisions as possible until Monday morning.

I realize, belatedly,⁠04 Perhaps because I'm cognitively fatigued as I write this? ‾_(ツ)_/‾ that one unintended effect of this post might make applicants concerned about decision fatigue with respect to their own individual application⁠05 Now, one piece of practical advice I can give you with all of this context: this is why you shouldn't make your applications any harder to read, interpret, or evaluate than absolutely necessary. Everything in your file, from the way you use line breaks in essays to the fonts on supplemental materials, is going to make your application more or less marginally exhausting to read. One pragmatic reason why your college application is (probably) not the place to get too experimental, or to be internally inconsistent or erratic, at least for highly selective schools, is that each marginal interpretation adds to the cognitive load of understanding and evaluating a case, which in term makes it more likely that some aspect of your application will be misunderstood. I have known amazing students who were <em>terrible </em>at filling out their applications (<em>looks meaningfully at Nisha</em>) because it was so erratic and chaotic it took extra effort to understand how awesome they actually were. Part of being your own best self-advocate is making your application <em>readable</em> above all else. to MIT. But I don’t think you should be alarmed for a couple of reasons.

First: some version of this is going to be true for basically any college you apply to, or frankly any sufficiently any competitive selection process at any point in your life. This is something I have learned to accept in my own life of applying for grad school and jobs, and it has liberated me from the debilitating perfectionism and anxiety often associated with applying to things. Judge Hercules is a fiction; admissions realism is descriptively correct. Humans, with all of their strengths and weaknesses, are reading and interpreting your applications. If that is surprising to you…then I guess the blogs have failed you.

Second: any good institution solves for inevitable individual shortcomings with better process. I described above some of the ways that we take care of ourselves during this time of year, but we also have processes to try to correct for ambiguities and inconsistencies, e.g. by having lots of rounds of reading and committee, with lots of different eyes looking at them at different times, and lots of different methods of framing applications that are deployed at different stages, so that the cumulative cognition allocated to each application is sufficient to give us confidence in our assessments. This process is itself exhausting, but it’s exhausting in a way that gets us over the finish line. It’s also why, when people ask me to describe our process, I often do so as “incredibly inefficient in a way that reliably produces good decisions.” Not despite, but because of.

This is also a request, I guess, to please be kind to the admissions officers in your life this time of year. If we aren’t responding to your emails as quickly as you might hope, or if we’re in a daze at Thanksgiving dinner and can’t figure out which sides to put where, just know it’s probably because we are reserving our cognitive capacity for where it counts most: making good decisions on your applications, as best as we can, until they’re all made.

I don’t have a good way to end this post, so here is a picture of me spinning something that’s extremely on fire;⁠06 Now that I think of it, spinning things that are on fire and trying to keep in them moving in the right direction while not being burned isn't a bad visual metaphor for my subjective experience of reading season. I’ll leave it up to decide if this is a good or bad decision so I don’t have to. 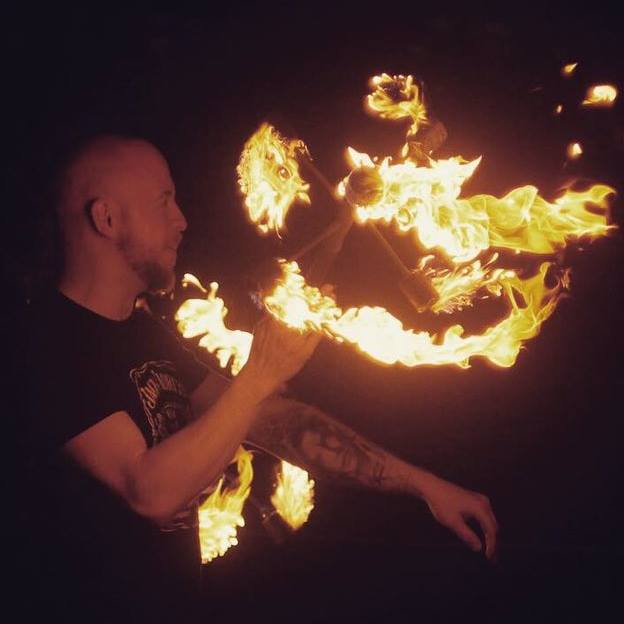