About 2 separate times last year, I found myself being pretty well described by this lyric⁠01 this is the undisputed original from “Lose Yourself.” The now-defunct decisions portal was scarier than when I hit my chin on Kingda-Ka at Six Flags. After reading this title, you might have guessed what this post is about. Maybe you went, “wow, is this title yet another bad pun?” And indeed, it is, albeit not a very creative one.

I wasn’t originally planning to write about getting deferred for this blog and planned to talk about this a bit later. I was scheduling a different blog for today, but then I saw the masterpiece that was the EA decision date announcement. With Shuli’s help, a small switcheroo occurred. So in a few minutes, here are some thoughts I almost deferred writing about.

If I remember correctly, one of the bloggers in our meeting mentioned that they would read the blogs in 4th grade or so. I, for one, was definitely not one of these avid readers of the blogs, and I didn’t hear much about MIT before high school. Just occasionally hearing the name being thrown around or someone gossiping about how their friend’s kid got into MIT. I knew it was a good school based on how everyone spoke of it, but that was, for the most part, the depth of my knowledge. It was a school where people probably built robots all day and used calculators a lot.

I first genuinely got interested in MIT freshman year when I got to be on campus during ESP’s splash program. I just fell in love with the wacky architecture, the students’ niceness, and, simply put, the vibe it gave off. It felt like a place that would be absolutely amazing to be at for 4 years.

Overall, I had a very idyllic view of MIT, and I carried this with me for the most part, which included when I was applying. This didn’t paint a full picture of the school and resulted in me mainly looking at the positive elements without any of the negatives. It was apparent that MIT was a place I loved but couldn’t see objectively.

As you might relate, the months between submitting my application at 11:59pm EST and getting a decision felt pretty excruciating. Not sure if it was less agonizing than actually writing all those apps, but pretty close nonetheless. Soon enough, 12/14 arrived, and so did every shred of anxiety I had been holding for months. 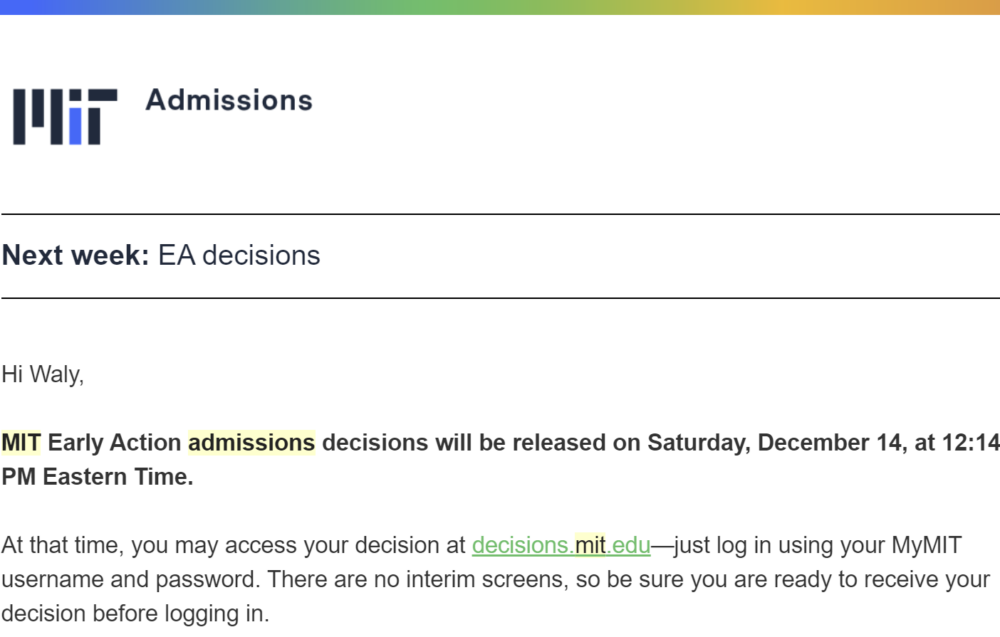 Going into decision day, I expected to be deferred for the most part. I was hoping I wouldn’t be rejected and was willing to bet my right kidney⁠02 I bet my left kidney on another school I would not get in. I already had heard enough times that MIT defers many people EA, and MIT felt like a long shot in general. On the day of decisions, I woke up at literally 12:14, internally screamed, and hunted down the closest electronic device. I remember it reasonably well due to the traumatic nature of waking up as decisions are being released. Saturday morning. It wasn’t long before I opened up my decision, and for once, things actually went as I expected. 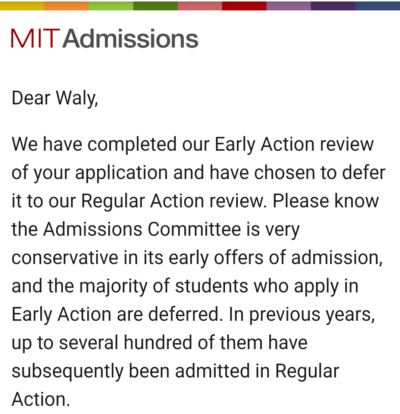 I did expect/hope for it, but the deferral still did hit a little more than I’d like to admit. And it’s ok it feels the same way for you or any of your friends on decision day.  MIT might be your dream school, as it was for me, so remember there’s nothing wrong with taking a break to vibe, feel, breathe, or make sense of it all. At the end of the day, there’s isn’t any right way to feel.

Personally, I was less disappointed than anxious about the next steps. The uncertainty was deafening. The letter was rather nicely worded, but that didn’t prevent the wide variety of impending and conflicting thoughts that passed through my head and might pass through yours.

The chances are low, but never 0

The acceptance rate for deferred people was not amazing. It was the first thing I threw into a calculator that day because I can’t do mental math. Though I’m not a huge optimist, there were moments immediately after getting deferred in which I was like, “Hey, they could have said ‘No,’ at least they didn’t yet.” The low chance served to motivate and stress me simultaneously, and it was a weird juxtaposition of feelings.

Hand me the L now MIT, you’re gonna do it in March anyways.

Was there any real shot left? Should I just pack up my bags and detach myself from MIT? To some extent, I wanted to avoid future sadness by feeling indifferent. Though this was failing miserably very fast. By 3:14 on that day, the combination of numbers 3, 1, and 4 raised my blood pressure to unhealthy levels. I was not indifferent in the slightest.

Wait, did I say March? I can’t wait till March WTF

As I write this, I am losing patience for many things. Like the next AOT episode. Or MIT housing results. But jokes aside, it did suck to be told to wait 3 more months. 3 months in college app season felt like an eternity. It still does right now. So the prospect of this long wait was what hit the most, especially for such an uncertain future.

Now I don’t want to paint getting deferred as a purely negative or positive thing from my perspective. Because it was neither in the end for me, and it might not be either for you. Being deferred was not easy and sucked some days, but over time it definitely got better; other things served as distractions and kept my mind away from the deferral.

In the beginning, I found it very helpful to look at a few past blogs. For example, I read Danny and Alan’s blog about getting deferred, and many times glanced at the deferred FAQs. It was uplifting to see people who got deferred actually got accepted, and just their overall take on the situation. As for the FAQs, they were quite helpful, but when an answer didn’t fill my dying need to know something, I was like 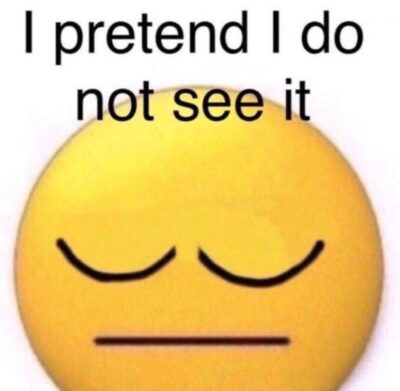 During the December to February span, many of those earlier thoughts began to settle down. I was bogged down with another round of applications for RD. As I answered all those “Why Us” supplements and wrote on and on about what I liked about other schools, I really began to fall in love with other schools. Their wacky architecture, the friendly students I never really met, and overall vibes were enamoring. They indeed also seemed like schools I could also see myself at. MIT and my deferral slowly fell a little bit further into the back of my mind.

With the MIT dream a bit fainter than before, it was during this time, I noticed a difference in how I viewed MIT. This could just purely have been salt, but I feel it was much more than that. Getting deferred really made me aware that other places not named MIT exist. That it would really suck to stay so attached to one university and miss out on looking elsewhere. It also made me think much harder about what I actually want in a school and delve deeper into schools than just the surface level qualities one finds. MIT became less idyllic, not in a bad way, but because I had a clearer and more diverse perspective to view it with.

Filling out the FUN form⁠03 February Updates and Notes; an amazing yet dystopian name for an update form with updates was one of the notable moments in which my MIT app was a pretty prominent thought, and I did have to think about how to fill it for some time. It felt so tiny yet so crucial since there weren’t many changes between my original application and the one that would be reevaluated RD. I wrote a little bit about new stuff I did, some general updates, and some more informal stuff.

In retrospect, I was just a bit more patient than I thought. Though 3 months felt like an eternity, in reality, it went by rather quickly. As MIT says in the FUN form, try to do some things you enjoy over these few months. Though Covid might limit many of the things you can do to distress and have fun, even something as simple as Among Us can serve to pass time. The second semester of senior year will hopefully be much calmer than the tsunami that is the fall, so make sure to take advantage of it :). 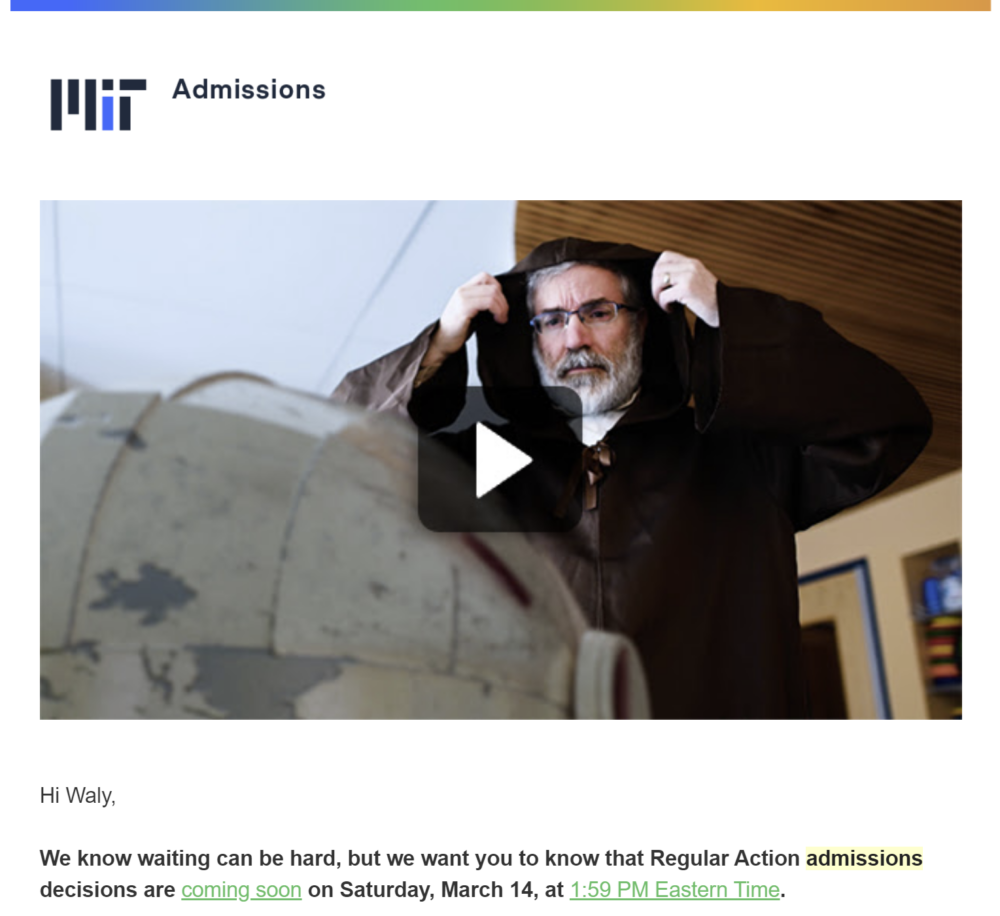 Fortunately and unfortunately, it wasn’t long before I reached the week of March 7th to the 14th, which was grueling. I thought I would be calm and chill, but that wasn’t really the case. In the end, a sleepless March 14th finally arrived. The fabled Pi day was a pretty nervewracking occasion. 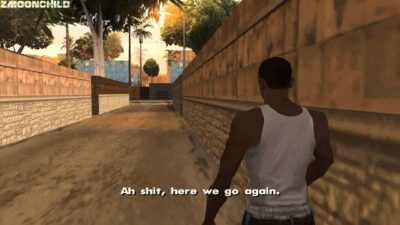 On that day, I spent much of the morning hours watching The Office⁠04 Netflix autoplay works wonders trying to get my head off decisions. Overall, I would really recommend binging a show to survive the wait that is decisions. I just started the first season, which many told me was the worst one, so it wasn’t the greatest, but I really enjoyed it given how stressful the time was. At some point, I reached a time where I couldn’t watch an episode in the 15 minutes I had left, so I did something else that was stress-alleviating. Eventually, the clock hit 1:59, and I entered the decisions website again. After having the admissions portal crash multiple times, I finally saw the decision. And I thought I got rejected because there was no confetti, and I lack the ability to read more than a line of text a minute. I buffered for quite a while, went beep boop beep,⁠05 yes, I am a robot and finally realized. I had 0 expectations of getting in (again) and was really shook by it all.

Outside of pure euphoria, it brought up many new questions to me, like “What was different about my application now vs. in November?” Some of these are questions that I still think about. But I probably won’t get the answer to them, which turns out to be ok. Somethings are just better left unknown.

With decisions coming out tomorrow, I wanted to end on this note.

Tomorrow will probably be a day filled with emotion for many of you. It will admittedly be nerve-wracking, no matter your individual result. I know that this is the same phrase you might have already heard on repeat. But regardless of what happens, please don’t let MIT define you or be your defining characteristic. It’s cliche, but just know you’re doing great no matter what, and we’re proud of you for getting to this point in a tough year. And with that, hats off to 25.