DEW was nobody’s first choice of FPOP, at least not for anyone who participated. That hurt for a couple of days—”If I can’t get into an FPOP, what can I get into an MIT?” I figured DEW was worth trying anyway: best to get comfortable on campus before the orientation stampede. And I didn’t want to miss any MIT opportunities (helped that I got accepted as a blogger while packing).

The 3.5 days of DEW, also the first days of college, were intense. The East Campus Head of House warned the frosh after dorm rush to not go at 90 mph from the start, but he was too late. On my first day at MIT, I talked to my roommate, from the Discover Aerospace FPOP, until 4 am. It was the latest I had stayed up in my life (with the exception of New Year’s Eve in Ukraine and maybe CPW). The DEW FPOP gave me new friends and skills. Made me appreciate the breadth of MIT offerings for athletes and beyond.

The main benefit of DEW: exposure to MIT athletics. We got several personalized tours, including through the tiny doors of the indoor golf courses—why MIT has toddler doors for mini-golf remains a mystery.

The long-term benefit of DEW: 2 PE points and passing the swim test early. I don’t have half my PE points still, but at least I don’t have to worry about swimming. I would’ve failed the swim test in front of an awkward crowd. Then I’d delay it until I could no longer fit into my freshman swimsuit.

The unexpected benefit of DEW: multiple adrenaline rushes, something I’ve avoided before and since—that start-of-college-90-mph energy has reduced substantially. 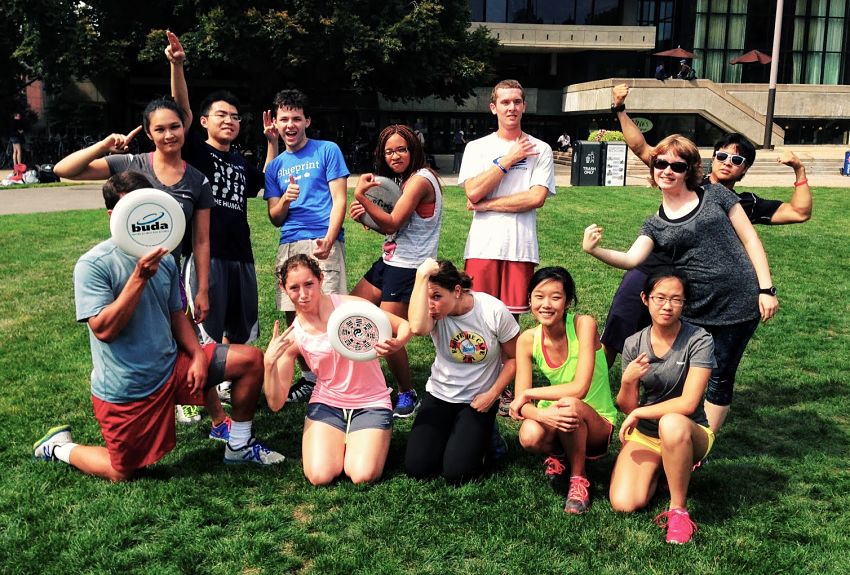 Note: credit for most images goes to our wonderful DEW mentor

The first day started with team-building. Then we tried high ropes and trapeze—I made it up and out! At the end of the day, the group tried to explain softball to me, an immigrant. I think I got it at the end? In between, we took a sports facilities tour, learned about nutrition, and played ultimate frisbee.

We also got a lecture about preventing substance abuse, where I learned that one can earn $30 for a 1.5-hour confidential talk with a substance abuse counselor about your alcohol issues (or the absence of them). We also learned that MIT students tend to drink safely. And we got a swag multi-tool from the Office of Community Development and Substance Abuse. 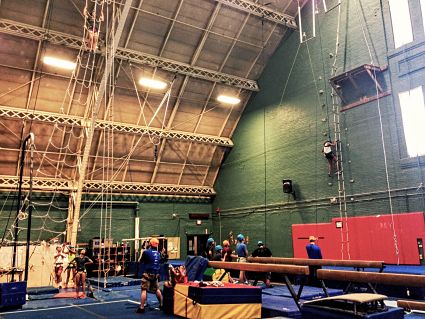 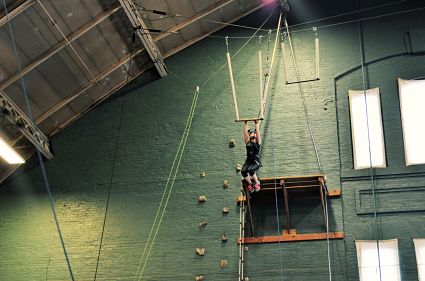 On Day 2, we started with spin class, and I was butthurt, but also determined to take a formal Spinning PE during the semester. Then we had yoga, which I could do. Also featured on Day 2: sleep and stress management lectures, swim and boat tests, pizza, and more swag (including t-shirts with inspirational quotes that all freshmen get after passing the swim test).

For the swim tests, we got the giant pool to ourselves. Convenient, as it took three tries for me to pass the 100-yard (~91 m) test. I gave up midway on the first two tries, and had to swim more—not a great strategy. But the adrenaline only kicked in on the third try—or it could’ve been the embarrassment of having to take a walk while other DEW-ers were playing underwater hockey with the MIT team. According to the trainers, it looked like I would faint.

At the end of the second day, we went on a boat tour of the Boston Harbor, passing just as the USS Constitution fired its cannon at sunrise. I wrote later in my blogger notes that it was “chilly but beautiful.” That evening, a fellow math major DEW-er and I decided to be “math gangsters.” I think that gang has been disbanded. 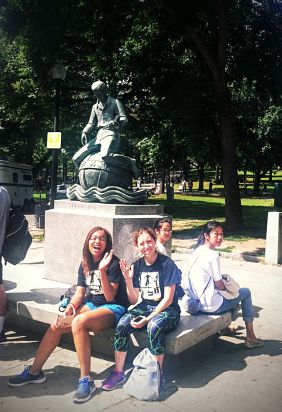 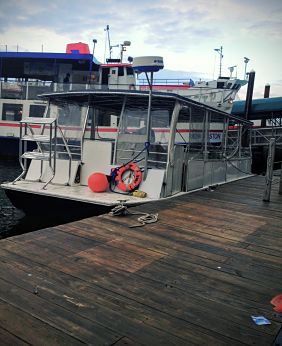 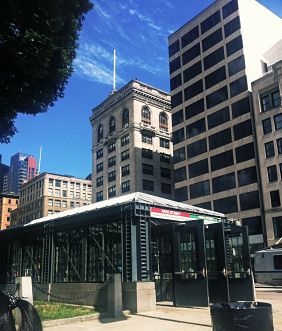 Day 3 started with a lecture on eating healthy at MIT. Then we tried crossfit. I really wanted to like crossfit—the cool, new, and healthy thing—but I didn’t. I couldn’t. The intermittent strength and cardio training was not fulfilling enough to justify the pain.

After lunch, we went downtown for a Freedom Trail Tour, led by a historically-dressed guide. The man attracted puzzled looks, despite the ad with his face plastered over the trash bins. A passing Ukrainian-speaking woman told her friend about us over the phone—interesting time to hear my language.

The Freedom Trail Tour was the only historical Boston activity I’ve done in college. Sure, I go to Faneuil Hall, but only to shop and eat. It’s a curious phenomenon: passing tourists pay to learn, while resident students never hear about Boston’s past. At the end of the Tour, we pushed through the crowded Haymarket, where I got $1 raspberries and resolved to come back every week.

Day 3 ended with BBQ at the sailing pavilion and a boat ride on the Charles River with a member of the Sailing team. She was a real MIT student, so we asked a lot of questions. 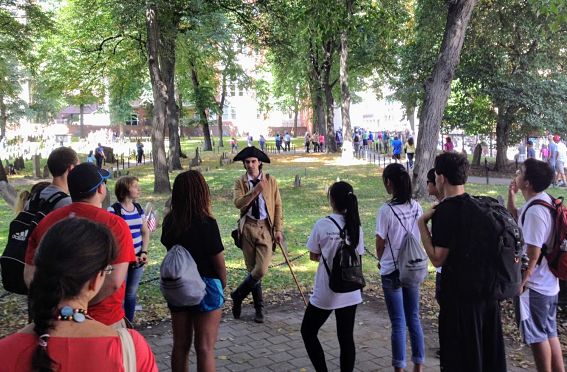 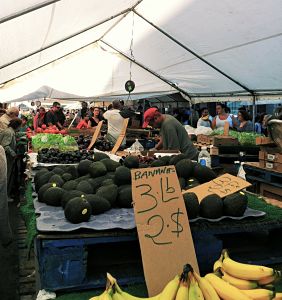 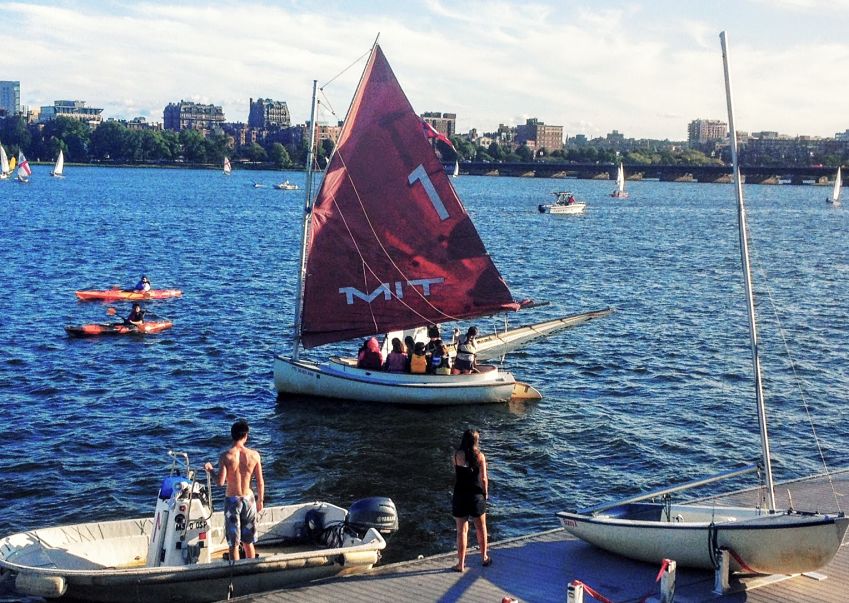 Day 4 was start of REX (Residence Exploration) and move-in day for all pre-frosh, so we only had half a day of FPOP. Our DEW group went on a private tour of Fenway Park, home of the Red Sox and oldest ballpark in MLB. Having just sort of learned about softball, I mostly appreciated the views, and took pictures for the blogs. Even though I wasn’t an official blogger yet, I made sure to document everything and ask my companions for consent to be featured on the blogs.

Back on campus, we tried body sculpting with the crossfit trainer. She told us that gaining muscle helps lose calories and I resolved to take a Body Sculpting PE right after the Spinning PE. I was a lot more ambitious back then—now I still have two PE classes to complete.

We ended the FPOP discussing a future reunion. Our mentor revealed we were getting 4 PE points for the program. That’s the equivalent of two PE classes, halfway through the MIT PE requirement (alas, I found later that DEW was worth only two points). 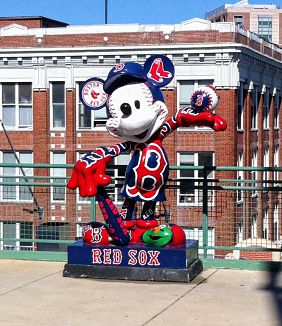 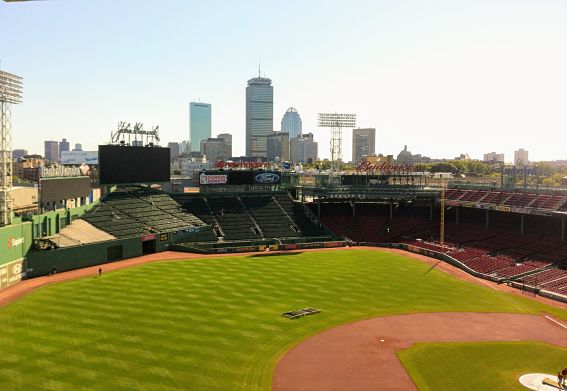 DEW was the perfect start to MIT, and maybe the most wholesome thing I did in college—with exercise, fresh air activities, and educational tours of Boston. Even if those four days were also a 90-mph disaster.

How cool is it that MIT freshmen can start off college by trying crossfit and making lawn chairs fly? Or fighting a cross-campus Water War and building rollercoasters during REX? No surprise the Institute was ranked the #2 “Work Hard Play Hard” school last year. 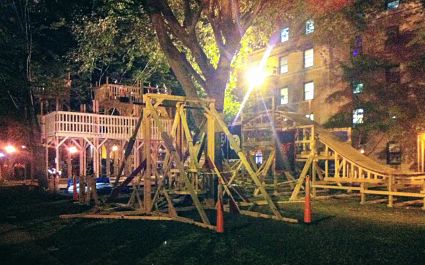 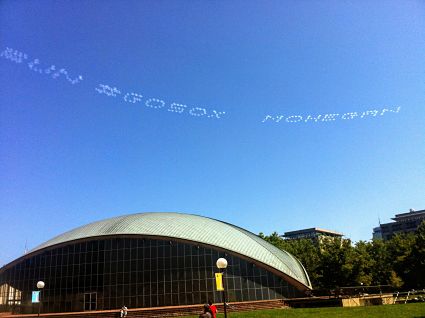