DME SoccerBot Championships 2006 (Or, How Does Justin Timberlake Live With Himself?) by Jess K. '10

All we are saying is give Pluto a chance. 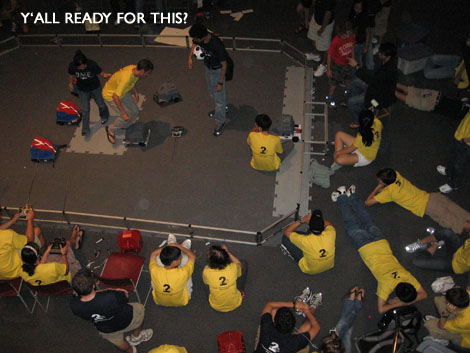 It was an epic battle, a tournament to the death. Tens of youthful spectators crouched eagerly around the arena, their jaws hanging open with anticipation for the coming soccer match. 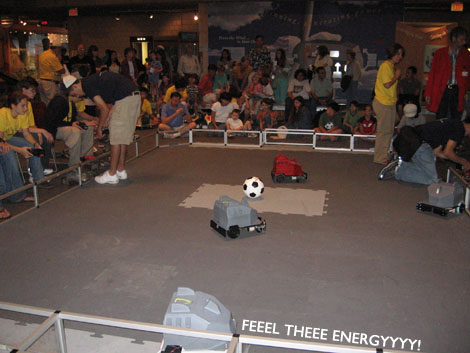 In one corner, the international team weBabble reloaded their batteries and tested their control boxes. In the other, Toxic Algae’s bots tweaked nervously. They had beaten five other teams, but lost to Ed’s Elephants due to batery failure in a sudden death one-on-one round (a clearly unfair call by the ref, since Ed’s Elephants had changed their batteries in between rounds). If they lost this match, they would be out of the tournament and weBabble would be on their way to the championship. 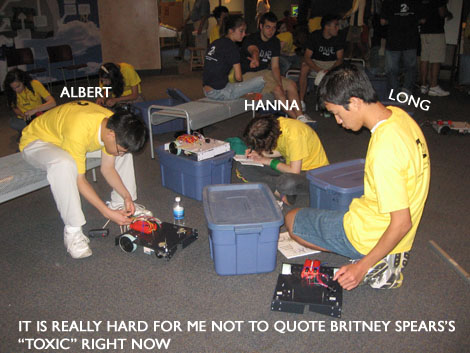 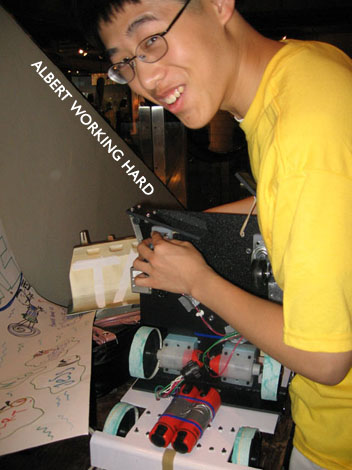 Toxic Algae had formed an unusally tight bond, joking around and making fun of their mentor Brad, while other teams sat silently soldering their solenoids. They were thus named in honor of the poisonous organisms in the Charles River, the body of water Brad had promised (signed a legally binding contract) to let them throw him in if they won. 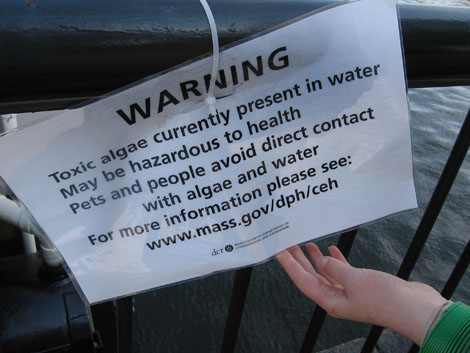 The four had worked tirelessly to craft the most agile bots, by covering their wheels with sandpaper to increase traction, and demonstrated their master teamwork skills by winning the scavenger hunt (photographing almost 40 pictures of cows and thus winning the right to custom-paint their robots). 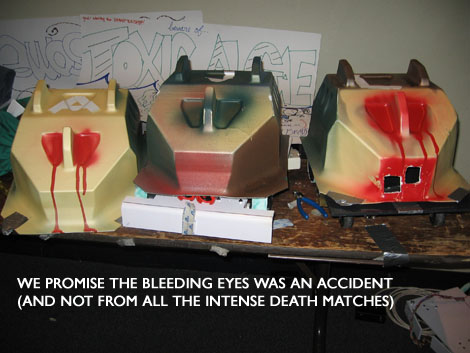 But back from our completely necessary flashback sequence/background information, the ref blew the whistle, and they were off. After a brief power struggle, Toxic Algae scored. 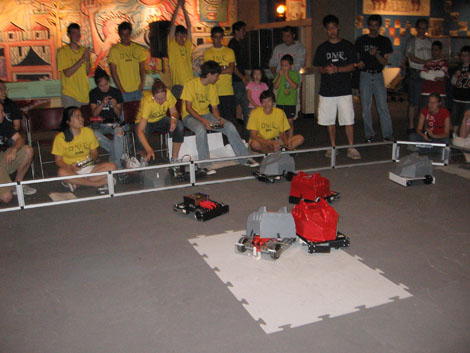 But the bots were tired, having duked it out in five previous matches, and at the kickoff they were shoved all the way back into the goal – without protest from the weakened motors – by weBabble’s uncanny strength. The score was tied and the tension was high. The commentary from Toxic Algae’s mentor Brad, and staff member Trevor, boomed from the mikes to the speakers. 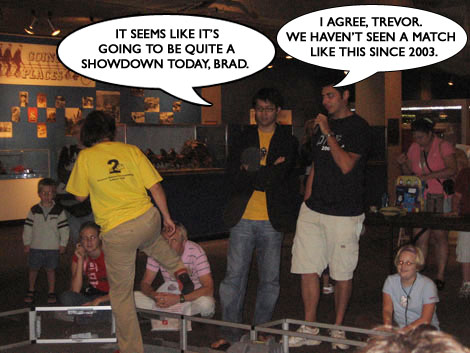 The bots were off again, and Toxic Algae’s seemed to be ready to put up another fight. Still, all the drivers had had limited experience controlling their bots, having spent the entire week strictly building in the machine shop, and each goal was elusive. But Toxic Algae clearly deserved it more, from all the effort they had put in. 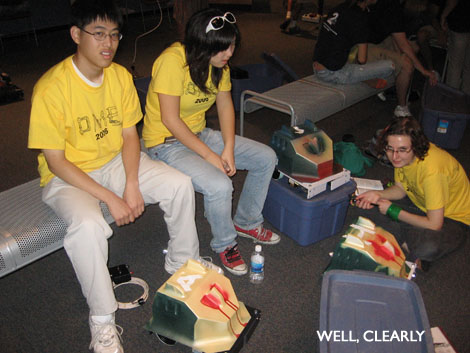 Yet by an unfortunate twist of fate and some bad defense, weBabble scored on Toxic Algae, and utilized the strategy that Toxic Algae should have put into play after the first goal – blocking the entire goal with all of their bots. And thus the great team was taken down. They had a vision. They had a dream. But alas, they could not come through.

Oh hey, Toxic Algae was my team, if you couldn’t tell. And in the end, Ed’s Elephants won first. Even still, Discover Mechanical Engineering was amazing. 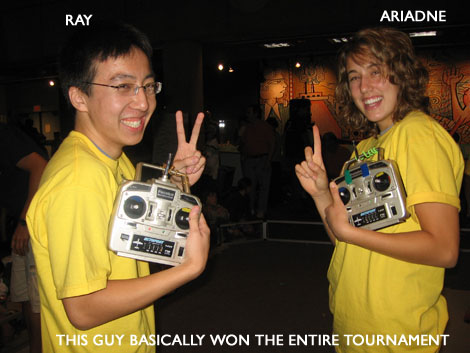 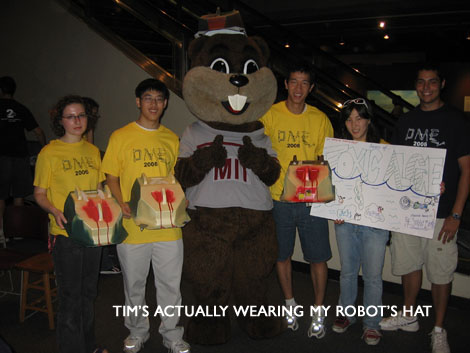 I would honestly say that you can’t really go wrong with any of the FPOPs, as long as you do one – especially if you go and check the others out (if you can; obviously if you’re in Freshman Leadership Program you’re not going to swim back from the island to hone your creative writing skills). When you all get into MIT (which you will, because you’re all wonderful, intelligent, passionate human beings), apply for an FPOP, because having met people in a smaller setting is a pretty amazing thing to have once the explosion that is Orientation hits. Also, I learned how to work a lathe, use a bandsaw at an angle, and about the joy of crimping while existing purely off of free food and partying with the FAPers. 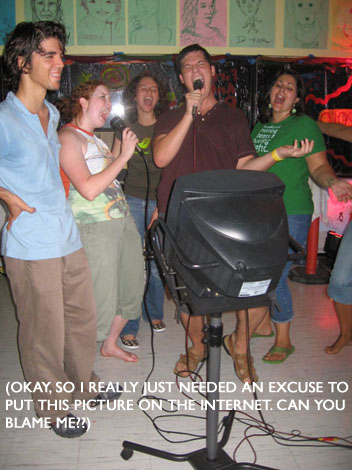 I picked DME, Discover Mechanical Engineering, firstly because we built soccer robots. I’ve never actually built a robot before, so I thought it would be a good time to start (because of that whole going to MIT thing, and all that). 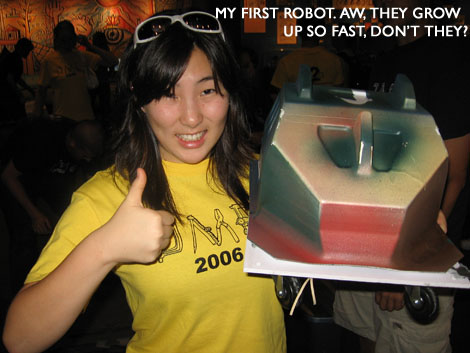 Which leads to my next reason – I really, genuinely don’t know what I’m going to study at MIT. When I’m not telling people that I’m going to be an astronaut (in the same light as me telling them that when I grow up I’d like to be a cowboy or a butterfly, except that here I could actually really do it), I spew out this verbal garbage: “Um, I’m interested in premed. But that’s not a major. I haven’t actually done biology in three years, but I liked it then. I think math is fun, but I wouldn’t major in it. Course 9 would be pretty cool. Maybe 2?.. hey, where are you going?”

Like I said, my team was incredible, and I had a fantastic time with Long, Albert, and Hanna (’10s all). We were probably the closest knit team there, brought together by our strong desire to throw Brad in the river. 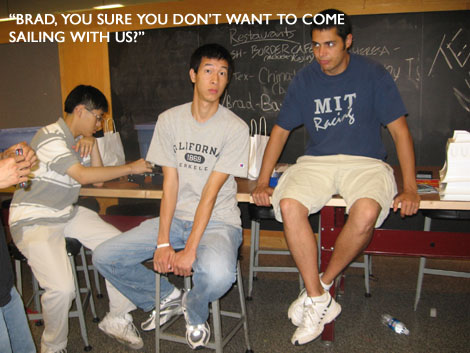 But the best part of DME was the tournament on Saturday; driving was incredibly entertaining, especially with all the kids getting so into it. 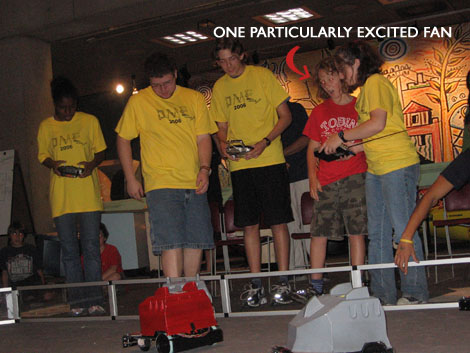 The whole thing took place at the Museum of Science, where we were forced to take a quick break from our tournament since they were filming a video on the recent controversy over Pluto’s proper classification. Emily ’10 and Alex ’10 (since this a freshman program, everyone was ’10, but I feel so much more official typing it out so I’m going to do it anyway) started a movement that was so fantastic I can’t even write about it. 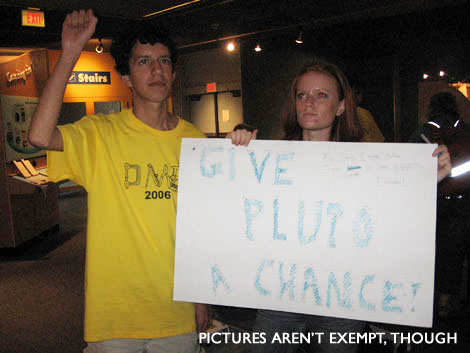 We marched up and down the three flights of stairs of the museum (actually, we rode the escalator, but that’s no way to fight the power) like this. We also got these fantastic bright yellow DME shirts, so on the way back Emily marched in front with the sign, like we were one great big Pluto-lovin’ parade. We shall overcome. 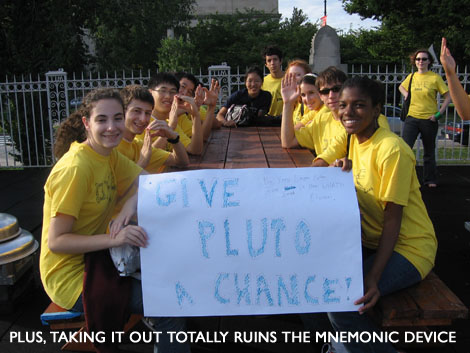 Speaking of the DME shirts, one of the staff members actually wore his to see Justin Timberlake, recently in the Boston area, and asked him to sign it. Justin Timberlake took this as a sign to take the shirt and ran away. 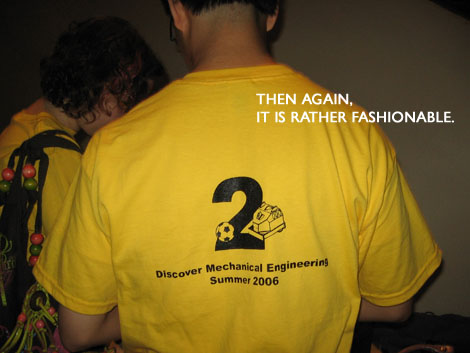 So, to sum up: I spent my first week at MIT building soccer-playing robots, meeting other fresh-off-the-plane frosh, discovering a potential major, and protesting Pluto’s demotion – all paid for by the MIT Mechanical Engineering department. And also, Justin Timberlake is a bad man. Any questions?

6 responses to “DME SoccerBot Championships 2006 (Or, How Does Justin Timberlake Live With Himself?)”