The MIT Fall Career Fair is an intimidating thing. Over 350 companies show up and they all potentially want to give you jobs. That is, if you are a senior. (If you’re younger, they may or may not want to give you internships. It’s a toss-up.) And you make a good impression. And are course 2, 6, or 18.

This is how I imagine the career fair going for my friends who are course 2, 6, or 18: 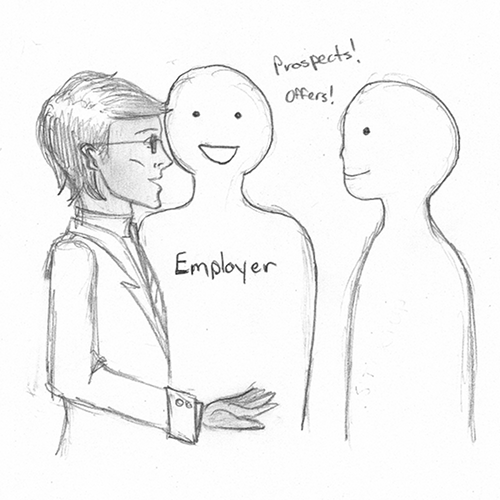 There are some companies that want other majors, but 2, 6, and 18 are the big three. This is how the career fair began for me (and everyone else I know who isn’t course 2, 6, or 18, as Ceri described in her awesome vlog): 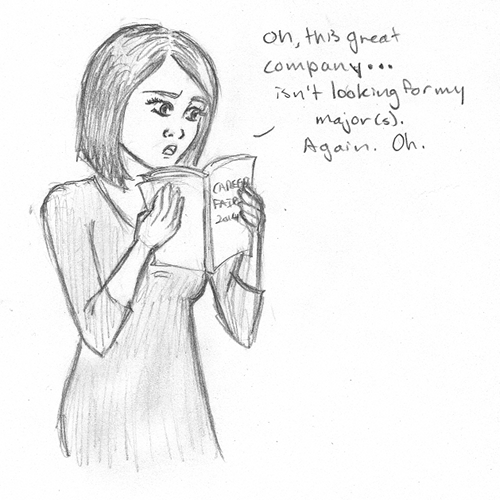 (Fun fact: if you air this grievance on Facebook, you will get a couple of alumni friends messaging you to tell you that their company could really, really use a person like you. Knowing People Who Are Real Adults in the World: 1, Career Fair Information Booklet: 0.)

Even though I’m a now senior and should Take These Things Seriously, I couldn’t get too pumped up about going to schmooze with a bunch of companies who, I felt, didn’t really want to hang out with me. It doesn’t help that I don’t want to go into tech – I’m interested in digital marketing and transmedia storytelling – and that my major combination is pretty rare. Explaining how my major works takes up all of the time allotted for a standard elevator pitch. (At some point, I’ll probably make an entire post about what a joint major, 21E/S, actually is.)

Last year, I made the mistake of putting “CMS & 6” on my handwritten nametag. This gave a lot of people the wrong impression. 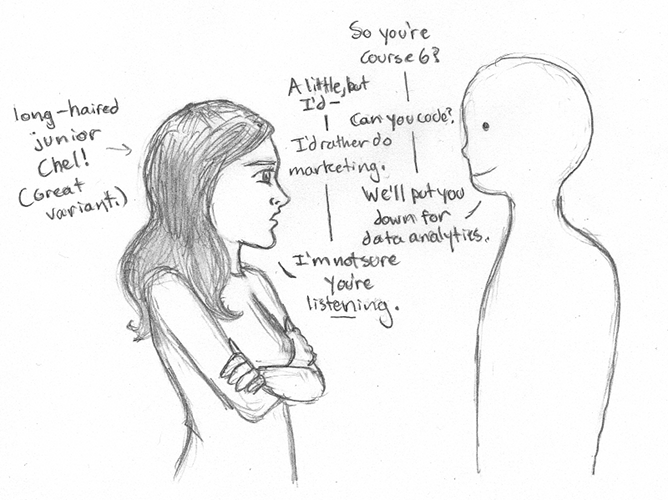 But last year I also managed to score a great summer internship – just not at the career fair, which just goes to show that even if the companies at the career fair aren’t looking for you, someone out there is. All you have to do is be direct about what you actually want, and go after it.

Having learned my lessons from last year, I went to the career fair with lowered expectations, feeling very little pressure. I picked out a few companies to investigate and otherwise spent my time weaving between stalls, making sure I passed every company at least once to see if I might be interested in them, or them in me. After all, even if a company is only actively recruiting course 6 majors, they may still need a marketer or something else and just not expect to find that something else at MIT.

Lo and behold, I actually had a great time! I came late enough to the fair that the long lines at the front had died down and registration had actually run out of nametags, which eliminated the possibility of nametag-induced confusion. I connected with a handful of companies looking for marketers (and a local, book-based tech startup looking to recruit for its editorial staff, which sounded like tons of fun). I learned about other companies I wouldn’t work for that filled fascinating niches in the tech marketplace. I encountered some alumni friends who had returned from distant lands to court current undergraduates on behalf of their places of employment. And, of course, I snagged a lot of 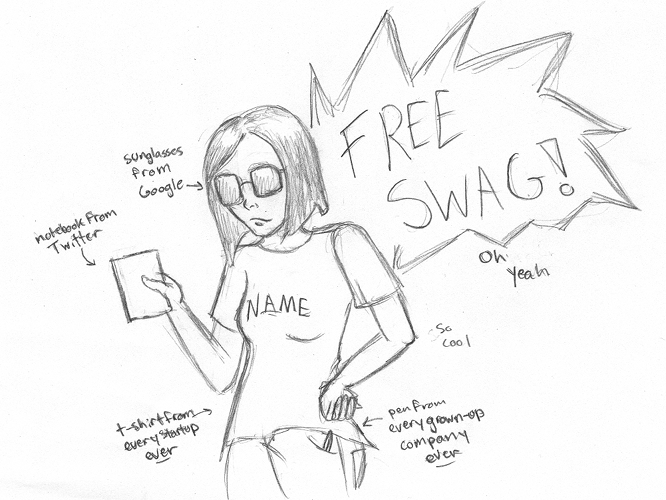 tl;dr: I overcame my apprehensions, went to the career fair, interacted with some rad people, and had a great time.

And I will never have to buy another pen or T-shirt for the rest of my life.