What it sounds like, plus some brief things that came to mind

In just the past few hours, I’ve realized a few things, mostly about myself:

Last Thursday was also a learning day, one that gave me real science-y skills. Specifically, I can now say that I kind-of-sort-of know how to run a gel, shorthand in this case for gel electrophoresis. To tell you more about it, I’ll have to walk through a little molecular bio for some context.

One of the major breakthroughs in biology came when scientists discovered DNA and began to unwind its secrets – pun kind of intended. Then came the central dogma of molecular biology, positing that DNA holds our genetic information, and mRNAs transcribe that information in a form that directs the assembly of amino acids into proteins.

But things really got more creative when recombinant DNA techniques were first developed, which owed to the discovery of restriction enzymes. These guys cleave DNA at specific sequences and tend to leave ends (“sticky ends”) that hang out and allow other such ends to bind, so long as that would result in complementary base-pairing. As these recognizable sequences tend to be palindromic, cutting a bunch of sequences with the same restriction enzyme will allow you to cut up DNA and paste different combinations of them together – hence the “recombinant” part of recombinant DNA techniques.

You can also use those enzymes in some analytical techniques. Enter gel electrophoresis, a method that separates molecules on the basis of size and charge. By firing up a current that courses through an ion-filled buffer, you can induce the movement of your analytes through a gel. Since DNA is negatively charged, it’ll be loaded on the negative side of the gel box so that it can be attracted to the positive side. It’s not smooth sailing through the agarose gel, though – on a microscopic level, it’s a pretty cavernous, rather bumpy ride to the other side. This kind of terrain makes it harder for larger molecules to travel, so they’ll move slower (and as a consequence, travel a shorter distance in a given amount of time).

Here’s an example that my lab partner in 9.12 and I ran! We did virtually every step, except for operating the UV imager, by ourselves, including creating the gel, digesting the DNA samples, and running some electrophoresis: 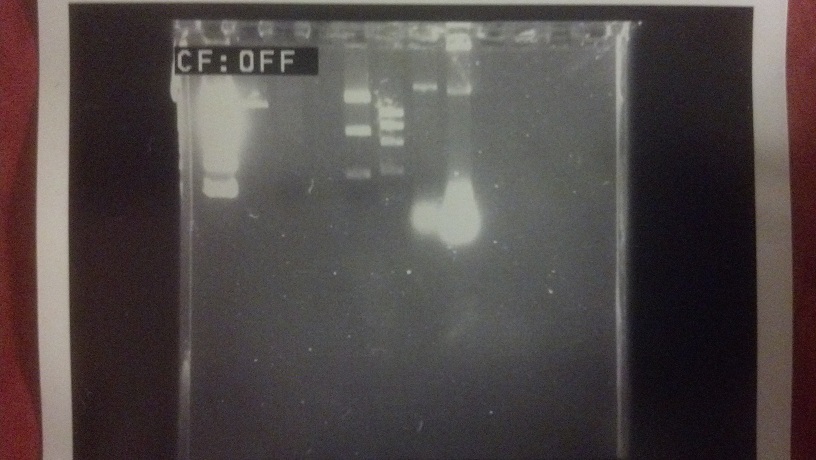 There’s two reasons why I didn’t just snap a picture of the gel itself. First, I did that in the lab, and it would’ve been weird taking off my gloves in the middle of 9.12 lab just to take a picture of the completed gel. Second, even if it were permissible and/or not weird to do that, you only would’ve seen only one straight line of purple across a few lanes. Bromophenol, the source of that purple color, is an indicator that tracks the progress of your gel electrophoresis. When it runs about half the length of your gel, that’s how you know you’re likely to have a decent amount of separation in the bands you see above.

So if the above isn’t from the bromophenol, what’s causing those bands? That’s GelRed, a proprietary fluorescent gel stain that binds to the ends of DNA fragments. If you expose this gel to a UV imager, you’ll get what I’ve shown above. The wells in which each DNA sequence started are at the top; bands marking the ends of DNA fragments of decreasing size progress toward the bottom.

(If you’re extra observant, you’ll see that it looks like I skipped two lanes in that gel. I’m pretty sure there were some…issues in loading the first couple of samples. It’s hard to get right the first few times.)

What is this all good for? For starters, it helps you finish up a 9.12 lab. Otherwise, you can use the lengths of the fragments you’ve produced to create restriction maps, which outline where restriction sites – the sequences that restriction enzymes recognize – lie on your genetic material. I’ve only ever made a restriction map for a plasmid, because it’s pretty easy to figure out for circular DNA, but in principle it should also work on linear DNA.

I’ll also get into other uses of gel electrophoresis as I go through the class, as a lab like this will probably cover techniques like Southern blotting at some point, which also makes use of electrophoresis. I guess they’re just not trying to let us get ahead of ourselves, since electrophoresis is a pretty fundamental technique in molecular bio lab work; other skills can build off of that. Bottom line: expect to hear a little more about these techniques as I learn them.

(P.S.: This won’t be relevant to a lot of you, but I like snickerdoodles. Or those Caramel deLite / Samoas Girl Scout cookies. *cough cough*)