So, in Massachusetts, there is a law called “An Act Relative to Transgender Anti-Discrimination”. In essence, the bill says that you can’t be discriminated against in public areas based on gender identity. One of the most frequently used examples of this is restrooms. A transgender woman can’t be told she can’t use the women’s restroom. The entire bill is here: https://malegislature.gov/Bills/189/Senate/S2407. It’s super short. In November, the people of Massachusetts will vote to repeal or keep the law. As a transgender woman, my opinion on this is fairly obvious.

I am extremely nervous about the outcome of this vote, but I’ll be okay because I have my fort! Yes, my fort is MIT and it’s wonderful people. MIT is such a great place to be queer! I live on East Campus, one of the most visibly queer dorms on campus (the other being Random Hall), but everywhere is really quite accepting.

Here are some groups to check out:

Rainbow Lounge The Rainbow Lounge is a dedicated queer space at MIT. They host a lot of events such as open houses, first-year dinners, and a trip to Provincetown. Check ’em out during CPW or REX.

Queer West Queer West is an organization that wants to “make West Campus gay again”. An admirable goal! They started because, as I said above, the East-side of MIT was much more visibly queer. One event that they do is called Coming Out Camping. Basically, you sit around making s’mores and telling coming out stories. I’ve gone twice so far: during CPW and during REX. It’s a great time to really get to know more people, especially those who have gone through a similar experience as you.

Others There a few other groups that I’m not very involved in. There’s a Gender Fluidity Group, Affiliated (they work with fraternities/sororities/independent living groups), [email protected], and many more! Check out the LGBT MIT page: https://lbgtq.mit.edu/

My time here (all four weeks :O) as a transwoman have been really great! I’ve got a ton of friends, both trans and cis. My temporary roommate is a close friend of mine (I live in a single now :sunglasses:) He’s someone I’ve always been able to turn to and be open with, which is quite rare for me since I am an EXTREMELY shy person. He also pushed me to be more social, which never worked, but I appreciated nonetheless (shout out to my boi Peter, the 3rd coolest dude on campus). But, I’m extremely thankful for all my friends. They’ve made my time here all the better and easier.

Another facility that has helped me a lot is the MIT Mental Health clinic. I meet with a counselor about twice a week to discuss issues of gender dysphoria and social anxiety. I’m really happy with the care I’ve been receiving on a personal basis. Additionally, the Mental Health clinic hosts a gender support group every week where we just meet up and talk about different things that are bothering us. I’ve been finding really helpful and fun. I advise everyone to make an appoint with MIT Mental Health is something is seriously interfering with your life or school work. The people that work there really do care about making sure students are okay.

This post has been kind of a mess, and I don’t have much more to talk about since I’ve only been here for like 4 weeks, but I’m excited to get more involved with MIT’s queer community. So far, I’ve felt really welcome just about everywhere I’ve gone on campus. I also can’t wait to keep blogging! I want to have another post up either this week or next week detailing my first few weeks at MIT.

Also, feel free to contact me for any info you want about queer life at MIT. The address is in my blogger bio. I’ll try to write back as soon as I can!

Here is a picture of my cat: 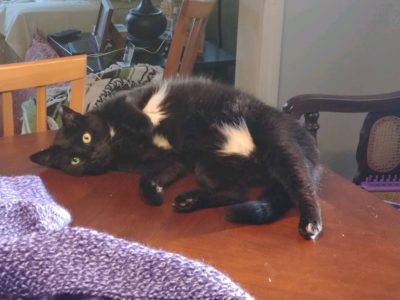 His name is Oreo and I miss him so much!

90% of this blog post was written to Napalm Death’s Scum. Good stuff.

Hello all! I’m Mimi Gloria Suarez-Rodriguez! I was actually born in Puerto Rico, but moved to Maine when I was like four years old. Don’t speak Spanish @ me, because I don’t really know it anymore. I’m all about metal (and all music, I suppose). You better believe I’m going to as many shows …
Keep Reading