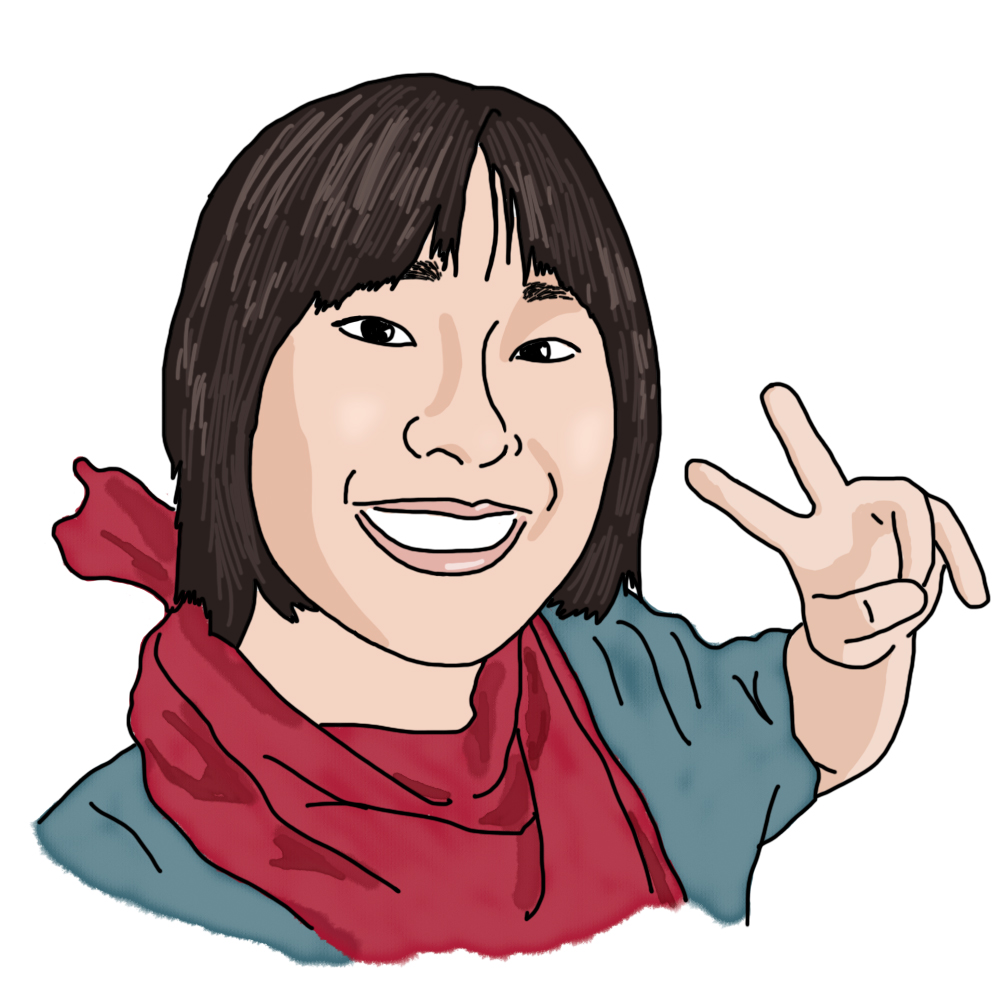 Like many I’ve talked to, I’m still stuck a couple years before me. In my case, that’s 10th grade, right before COVID hit. Senior year was a blur, and junior year basically never existed. I forgot that I graduated from grade school. Ironically, it’s really starting to hit me that I’m now a college student. Not only do I have a bunch of clubs and classes to do, I also have to figure out how to balance that with keeping myself alive. Can you believe that? I have to remember to drink water. (Speaking of which, here’s a friendly reminder to go get water.)

I’m stuck in a bit of a situation where I’m weirdly better at the things I used to suck at (ie. waking up early, keeping my room organized, doing laundry regularly), and worse at the things I used to do automatically (ie. drinking water, eating food, turning off the lights before I sleep). Even so, some things never change, like how terrible I am at organizing stuff. I have tried to start using a google calendar, but it’s not completely filled in yet. 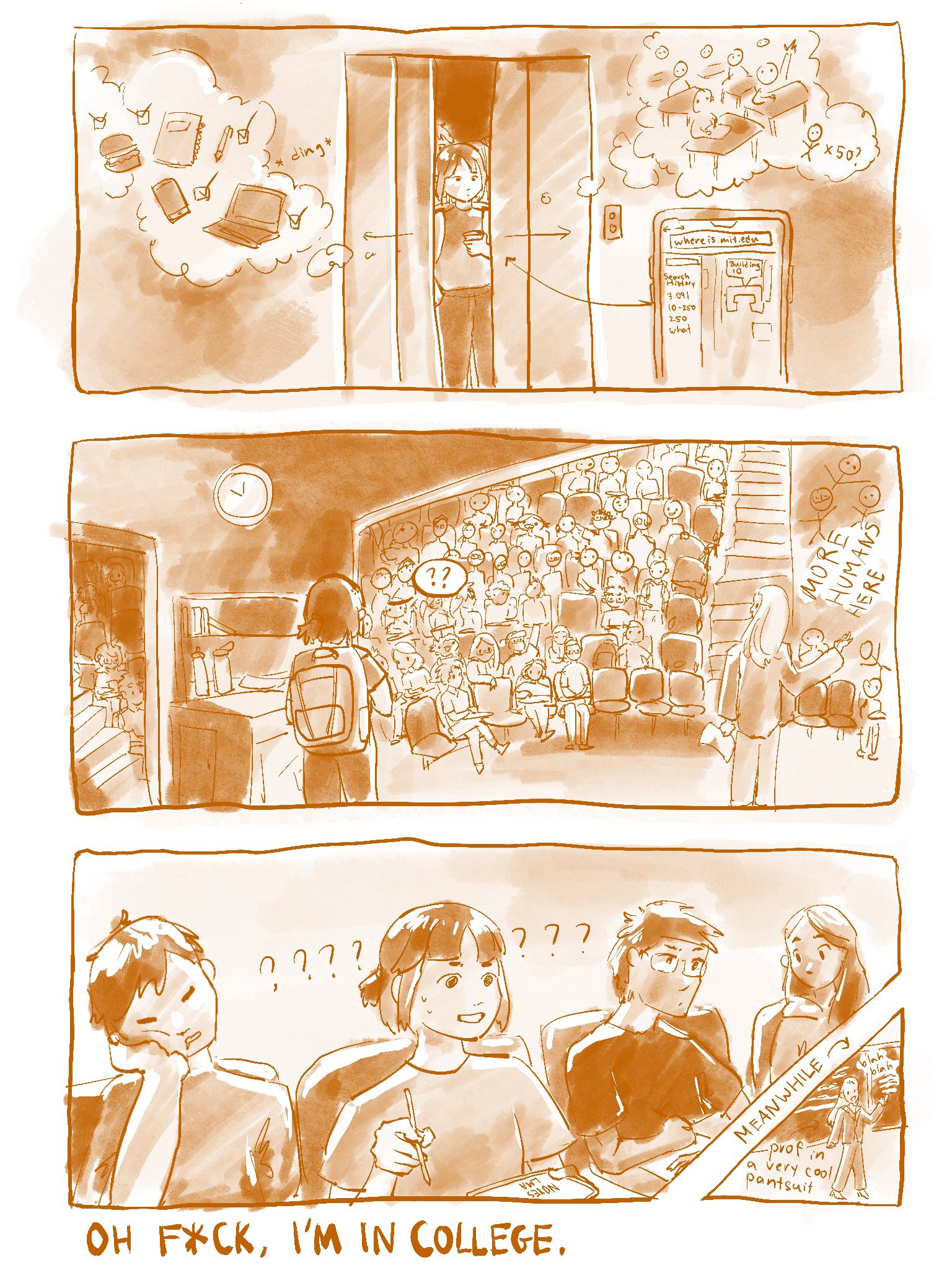 as i walk into the giant 10-250 lecture hall for 3.091, i become deeply confuzzled as it suddenly hits me that i’m actually in college.

I made friends, and I’m still making new ones! I used to be good at names in middle school, but that’s taken a nosedive since then. I can remember names and faces separately, with no connection in between the two. But even though I have the memory of a lobotomized goldfish, people are really nice about it, which is why I shamelessly ask them over and over again, sometimes multiple times within the same sitting.

I’ve never regularly gone clothes shopping or grocery shopping with friends before coming to college. I went to Garment District the other day, and the five of us spent a good while trying on trench coats, putting shark heads on each other and crafting the most ridiculous outfit possible. While I was looking through the racks for pants, Leek came out of the dressing room wearing high heels with their oversized T-shirt horrendously tucked into the knee folds of a pair of flare bottom jeans. Worse, it seemed like we were legitimately considering buying it. I found a cargo vest and a hooded jean jacket to put into my wardrobe, which previously consisted of only T-shirts and sweatpants, and I’m proud to say that I no longer look basic. But that’s debatable relative to the style of several people I’ve met at East Campus (and West campus as well).

Regularly, a bunch of my friends hold something called “frosh tea time,” which usually, but not always, involves tea. Sometimes it’s a pset party, or just a regular late night hangout. Our numbers usually range anywhere from 5 to 15-ish people. The day before the career fair, a group of us got together and started slapping together our resumes, skillfully embellishing our wondrous accomplishments from high school. What started out as an impromptu workshop in a group room at Hayden Library quickly turned into a cram session in Talbot Lounge with cups of iced tea to stay awake and boba that one of us cooked. Arthur sent us an overleaf resume template, which I proceeded to format very badly because I didn’t know how to use LaTex. Not knowing how many booths we can realistically talk to, we each printed 25 to 30 copies, with Powell topping the list at a whopping 40. And though I don’t know why the printers broke the next day, I like to think that it was because people were printing stuff out last minute for the career fair. A couple days after that, we stayed up until late again studying for the upcoming physics exams. The lot of us got distracted belting out musical soundtracks from hammocks and double decker sofas, but such is frosh tea time.

Making friends in college is drastically different from high school. You get closer to each other a lot quicker when you share the same living space and interact with them more often outside of school. When you get to see people all hours of the day, when they’re happy, sad, stressed, and dramatically dancing to an hour long loop of that one Morbius song playing in the lounge, friends no longer feel one dimensional. It’s refreshing in a really nice way. 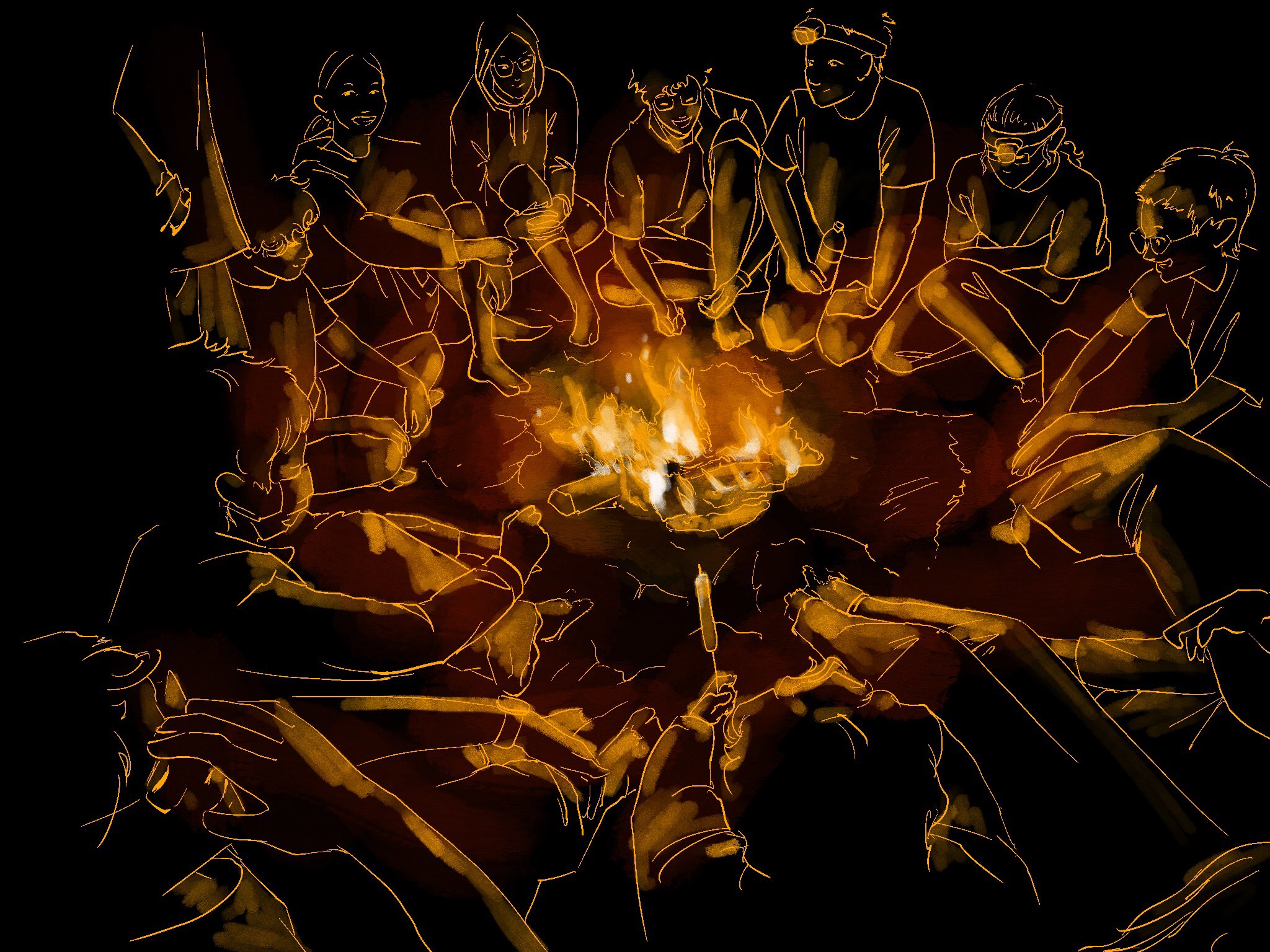 sitting around a fire with friends at the end of the day. immaculate vibes

and among other things, adapting to the chaos that comes with living away from home.

“food” I have made out of laziness 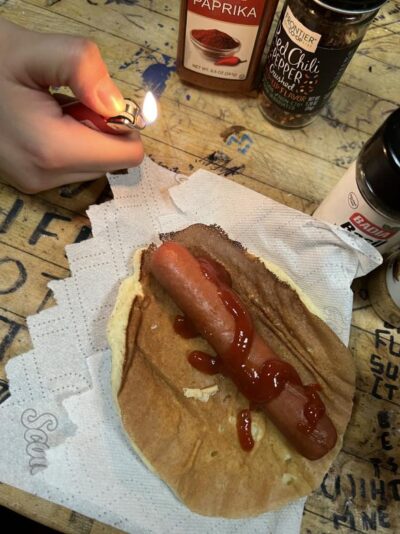 Two days ago, I finally managed to do one pull-up. I probably couldn’t do it again if you asked me to, but it sure happened. I have the stamina of a diseased rat and very noodly arms, but I’m strangely improving after coming to MIT. Although I came here for tech and tinkering, between the rock climbing, building, walking to and from classes and food in Boston, the pullup bar in Tetazoo, fire spinning, as well as climbing many many stairs on a daily basis, I think I might actually gain some muscle. By the end of my four years here, I think I’ll at least be a couple pull-ups consistently.

I’ve been described as having very strong frosh energy. Scared frosh, confused frosh, excited frosh, too-much-energy frosh— I have all the bases covered. There are just so many things happening all at once that emotional regulation sometimes just flies out the window. It’s so fun always having stuff to do, but when there’s perpetually something better to do than sleeping, you get thrown off balance. When sleep deprivation becomes habit, it becomes more difficult to invest time into doing the things you like. Especially because I live in East Campus where three shopping trips, a party, and a new building project are happening every week, it’s difficult coming to terms with the fact that I can’t always do everything I want to. I’m still constantly running from pset deadlines, and laundry still needs to be washed. This wide range of reactions to new things is fun though. When the year goes on and I become inevitably more tired, I still hope to be just as excited about new experiences as I am right now at the beginning of the year.

Classes have barely started, but through FPOPs, orientation, and meeting new people, I’ve already changed a lot since high school. I’ve been a lot less afraid of being judged for just about anything and everything I do, from my usual demeanor, to how I dress and how I talk to others. It’s a bit of a vague description, because I’m still figuring out exactly what’s different myself.

Hi! I’m currently a ‘26, living in East Campus. While I hang around most halls on the East parallel, I’m often lounging around in the Tetazoo kitchen, setting hand sanitizer on fire or trying to pet the cats. I come from Bay Area California and have never seen wild bunnies in such a large quanti…
Keep Reading