Breaking apart and growing, fireworks, and a story 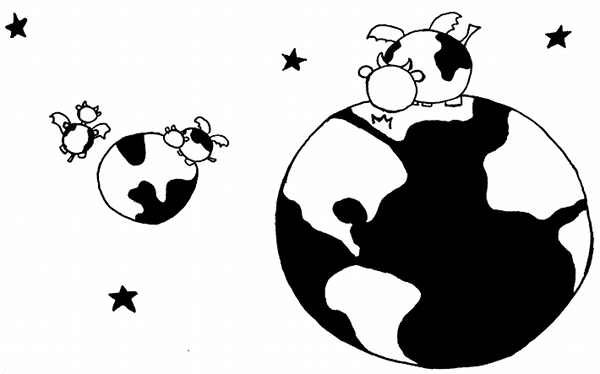 On the evening of June 6, 2012, a satellite with its camera pointed toward the sun sent the first 500 GB of its daily report back to base. Clouds covered the world thousands of miles below, where two summer interns were supposed to be observing the century’s last transit of Venus through its eyes. Their display showed an uninterrupted sphere of flames.

One squinted at the screen. “Shouldn’t we see it already? When was it supposed to start?”

“Half an hour ago,” said the other.

They stared at the screen for another minute.

“Good grief,” said the first, “and I wanted to run for president someday. What’ll happen to us if all our calculations were wrong, and there isn’t a transit today at all?”

The second scowled at him. “Our calculations aren’t wrong,” he said. “The transit of Venus is a fairly predictable thing.” He paused, switching the settings on the screen. “Listen,” he said, “I don’t know what’s going on, but we’ll upload the footage from 2004. We’ll reconstruct it from several wavelengths of extreme ultraviolet light and a portion of the visible spectrum. It’ll look different. No one will notice.”

The first shifted his weight in his seat and smiled uncomfortably. “You really don’t think anyone will notice?” he said.

“Of course not,” said the second.

And almost no one did.

Most of the world was overcast, but somewhere in the Pacific Ocean a cruise ship floated under one of the few patches of clear sky. A couple leaned over the railing on the deck, squinting at the setting sun through cardboard eclipse glasses.

And so on, until the red, uneclipsed sun disappeared over the horizon.

A month later, almost all of Boston descended on the Longfellow and Harvard bridges and, in boats and on the bank, the stretch of the Charles River that connected them. A warm, thick breeze reflected off the clouds and the water. The crowd gathered in the growing darkness, interrupted by the lights of Boston and the red lightning in the distance.

The Longfellow bridge was evacuated. A patrol boat crisscrossed from one bank to the other, warning kayakers to stay out of the coming storm: “Please find shelter,” he said. “The thunderstorm contains“—he paused— “lightning.”

The fireworks started, finally, to cheers from the crowd and a rumbling that didn’t quite sound like thunder or fireworks. Minutes later the storm started as well, pummeling the river through the fireworks. The crowd bent away from the wind and water blowing off the river. The rain pummeled their backs while they squinted at the booming fireworks behind them.

Finally the rain stopped. The lights on both sides of the river vanished, block by block, until the river and the crowd were lit only by the fireworks. The ground rumbled again, louder this time. A few minutes later the last firework folded into the water, leaving the Charles River and the crowd in silence and darkness. Now unmistakable, a deep, munching sound echoed against the buildings on either side of the river….

Almost all of that is actually true, except for the mysterious power outage and the mysterious munching and the mysterious disappearance of Venus. Summer has so far been a mix of foreboding clouds and heat. The photos below are from the Boston side of the river before a thunderstorm. Most of campus is to the left of the frame; you can see the Green Building on the left edge. The photos above are from the Cambridge side of the river before the fireworks, also before a thunderstorm. (Click for larger versions.) Ominous weather is my favorite kind of weather.  =)

My UROP is actually as exciting and mysterious as I tried to make the rest of this blog post. And it’s real! I’m working on a low cost, high-risk project in the same lab I’ve been in for the past year. It’s extremely unlikely to succeed, but it’ll be darn awesome if it does. Every day is completely uncharted territory, with rapids at every turn. At the moment things seem to be going very well, but I might change my mind by the end of the day.

Since it’s far behind me, I’m now going to share a big secret about my past year at MIT: it hasn’t all been fun. The past two semesters have been tough, academically and otherwise. When I was applying to MIT, I coped with the potential for low grades and low self-esteem by telling myself that I wanted MIT to take me apart and make me better. The past year has without a doubt been a taking apart, culminating in ripping apart and eating bags of black tea at my final exams. For about a month after finals I kept having weird nightmares where our transcripts were tattooed into our backs at the end of every term and I didn’t want to go out in a swimsuit. Now is hopefully the rebuilding. Here are some things I’ve learned:

Did you know that lightning makes raindrops bigger? This summer I’m also lightly studying for next semester and mentally preparing for the next two years. I’m going to have to kick it up a few notches, and I’ll have to grapple for those notches as I go. Like I said, ominous weather is my favorite kind of weather. Bring it on, Dark and Mysterious Future.