Note: This entry is the second part of my blog last week, in which I described my lessons from the National Conference for College Women Student Leaders (NCCWSL). 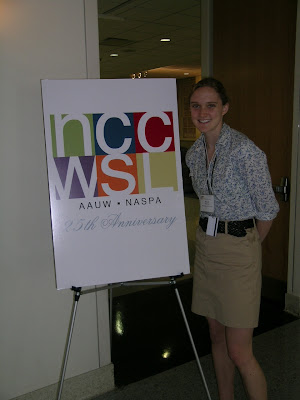 I had gone the whole weekend without a picture until a few minutes before I left. Quick! Stand next to the official-looking poster!

I’ve been fortunate in my life because I was never aware of any glass ceiling; my future looked more like an open sunroof. My family supported my interests, whether I said I wanted to be a teacher, a cop, or a dog kennel owner.

Growing up, I always liked math, but when I got to high school, I, like many of you, realized I loved math and science. Mine was the type of school in which women were encouraged to take on math and science because it was one of those all-girls schools. Yes, we wore plaid skirts.

In high school, all of my science teachers were female. They were such great role models because they were absolutely passionate about the subject they were teaching. Their motivation was contagious, and thinking of myself as a scientist became second nature.

So once I got to MIT, where women make up about half of the undergraduate population, I never felt different for being a female engineer. In fact, Elizabeth ’11, a ChemE friend, told me about the Gordon Engineering Leadership (GEL) Program and got me really excited about it. In May, I visited the GEL program’s final leadership lab of the semester, during which a graduation ceremony for the GEL class of 2010 took place. It was encouraging to see how optimistic the graduating GELs were. Both the men and women seemed excited to jump into their post-MIT lives. I was also pleasantly surprised to see Elizabeth named GEL ‘11 class leader for next semester! In this role, she will coordinate program activities and allocate resources while working with both GEL staff and students.

These opportunities make me optimistic of the future, too. I often try to imagine the reactions I’d get if I told people 50 years ago that I was an engineering student at MIT participating in an engineering leadership program. I got my answer, unfortunately, in 2010.

While in a cab going to the airport from the NCCWSL, which I mentioned in my last entry, dressed in my business casual attire, the driver asked me what I was in town for. Being the courteous passenger, I told him about the leadership conference. “So you want to be a leader?” he asked, waving his fist in a “you go girl” kind of manner. He then added, “I thought you were a model. I wouldn’t think someone like you would be into leadership.”

This is really what he said to me.

It was the first time that I saw a tiny piece of a glass ceiling close over my head—how ironic for it to happen after a few days of seminars and conversations about assumptions like this at the conference. It may not seem like a big deal when considering what some women have been through to get where they are today, but there’s something about the phrase “someone like you” that sets all sorts of alarms off in my head.

Maybe telling you to explore science or chase your dreams would be like preaching to the choir, but you never know whose lives you all can change by acting as a role model for others. Get involved, network, talk to people, talk to non-science people. Let’s get this conversation going and we’ll keep it going in this blog and on campus.