a selection of dishes, part 3

Ciao. It is I, Jacky of the French Dormitory. My culinary journey, as faithfully published here on the blogs by CJ, started freshman fall, when I explored traditional dishes from around the world; and continued through my sophomore year, during which I reproduced and modified recipes from my favorite Michelin-star chefs. Now, upon finishing my junior year, I finally feel like I have developed my own signature style in cooking – dishes that are authentic reflections of myself.

A lot has happened in the previous year that contributed to my culinary development. I started working at a company that provides excellent lunch, giving me recipe inspirations, and allowing me to focus on what’s for dinner. At the same time, I grappled with changes in my personal life that led me to question my reason for cooking.

I believed cooking to be an expression of love – to understand a person and to craft meals specifically tailored for them is, in my opinion, a noble pursuit. Alas, love isn’t always fun and games.⁠01 cj: this is jacky's way of saying relationships are hard I learned the hard way this past year that one must love themselves before they are ready to love others. Suddenly, I realized that I have been catering to other people’s tastes for so long that I couldn’t find myself in my cooking. As if lost in a dark wood, I felt, with a direness, my senses decline, my finesse lost, my inspirations withered.

It was around that time when I was introduced to Dante Alighieri and his law of contrapasso governing punishments and redemptions. I found Dante’s works to be uncannily rich in food metaphors, with perhaps the most famous example being this oft-cited passage in La Vita Nuova (The New Life).⁠02 Alighieri, Dante. <em>Vita Nova</em>. Trans. Andrew Frisardi. Evanston: Northwestern UP, 2012.

And in one of his hands it seemed that he held something consumed by flame, and I thought I heard him say these words: “Vide cor tuum” – “Behold your heart.” And when he had been there a while, it seemed that he awakened the sleeping lady, and he was doing all he could to get her to eat the thing burning in his hands, which she anxiously ate. 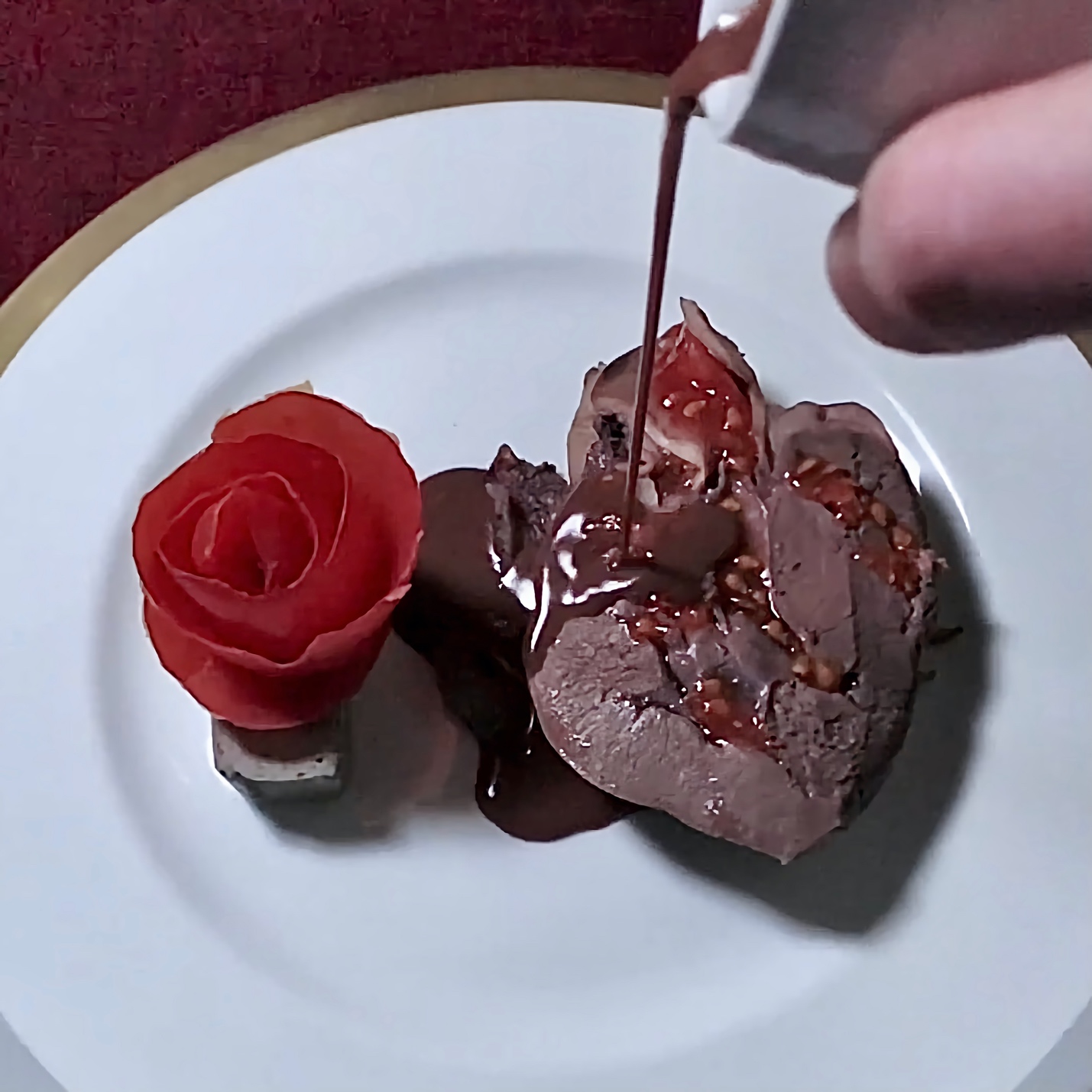 Figure 1. Vide cor meum⁠03 The eponymous aria in the movie Hannibal is inspired by Dante’s sonnet in La Vita Nuova. – see my heart. The eating of the heart is a powerful metaphor. Dante had his fed to his beloved Beatrice. For valentine’s day this year, it was about time that I learned some self-love. Thus, braised heart with a chocolate mustard sauce, with goose liver pâté garnished with a tomato rose.

The Dantean heart recipe was the result of much exploration and experimentation, through which I rediscovered myself, my palate, and my cooking. The dish happens to represent the three central tenets of my new culinary style: dry aging, flambé,⁠04 cj: jacky likes blowtorches, you'd think he wasn't a biology major and specialty meats. What a befitting, albeit self-arbitrated, contrapasso! Unfortunately, it is rare for a recipe to involve all three elements like this one. Here are some more demonstrations of each individual technique. 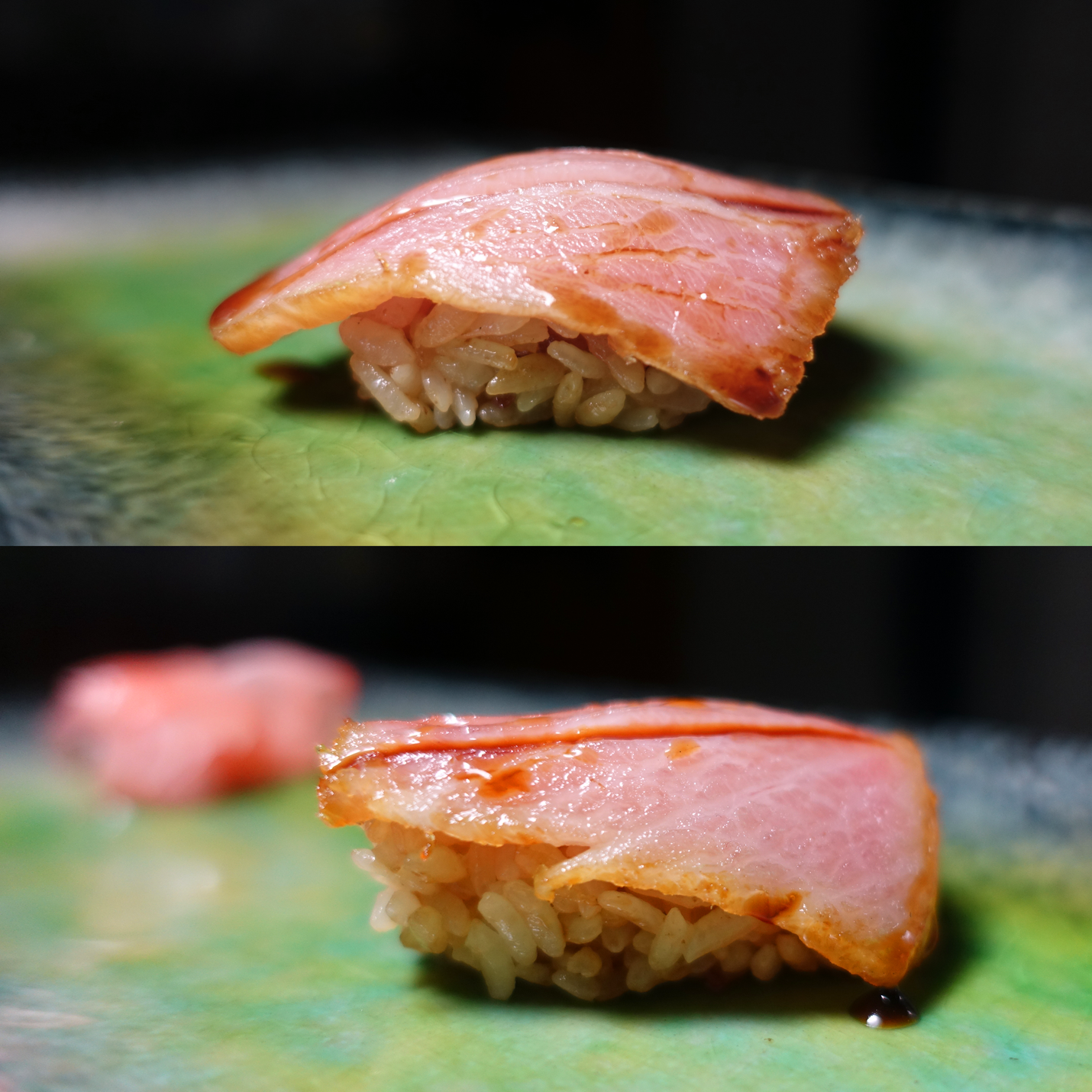 Figure 2. 14-day dry-aged o-toro. Dry aging serves a triple purpose: it dehydrates the meat, concentrating flavor; it facilitates the breakdown of protein into savory amino acids, creating extra notes of umami; and it compromises the integrity of muscle fibers, giving tenderness to even the toughest cuts. Dry aging is common in traditional Japanese sushi, but it is rarely seen in the U.S. – shown here is a piece of fatty tuna belly (o-toro) that has been dry aged for two weeks. 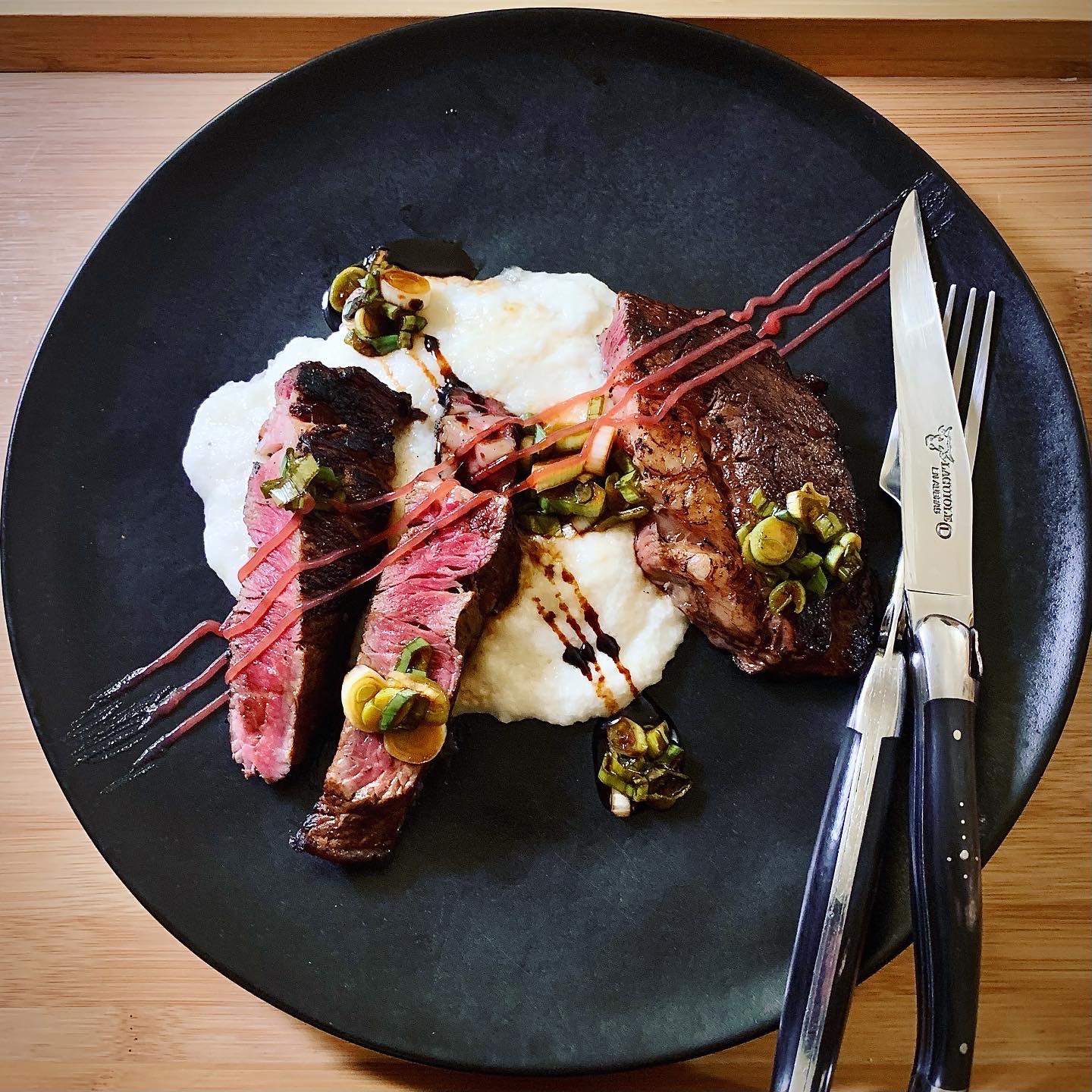 Figure 3. 14-day sakekasu-aged ribeye. A wider-known use of aging is in the steak world. This piece of ribeye was aged in sake lees (sakekasu) for two weeks to imbue it with an intense fermented flavor. It was then paired with a refreshing cloud of yuzu-flavored nagaimo puree, vinegar-marinated scallions, and a crisscross of aged balsamic vinegar and ume dressing. 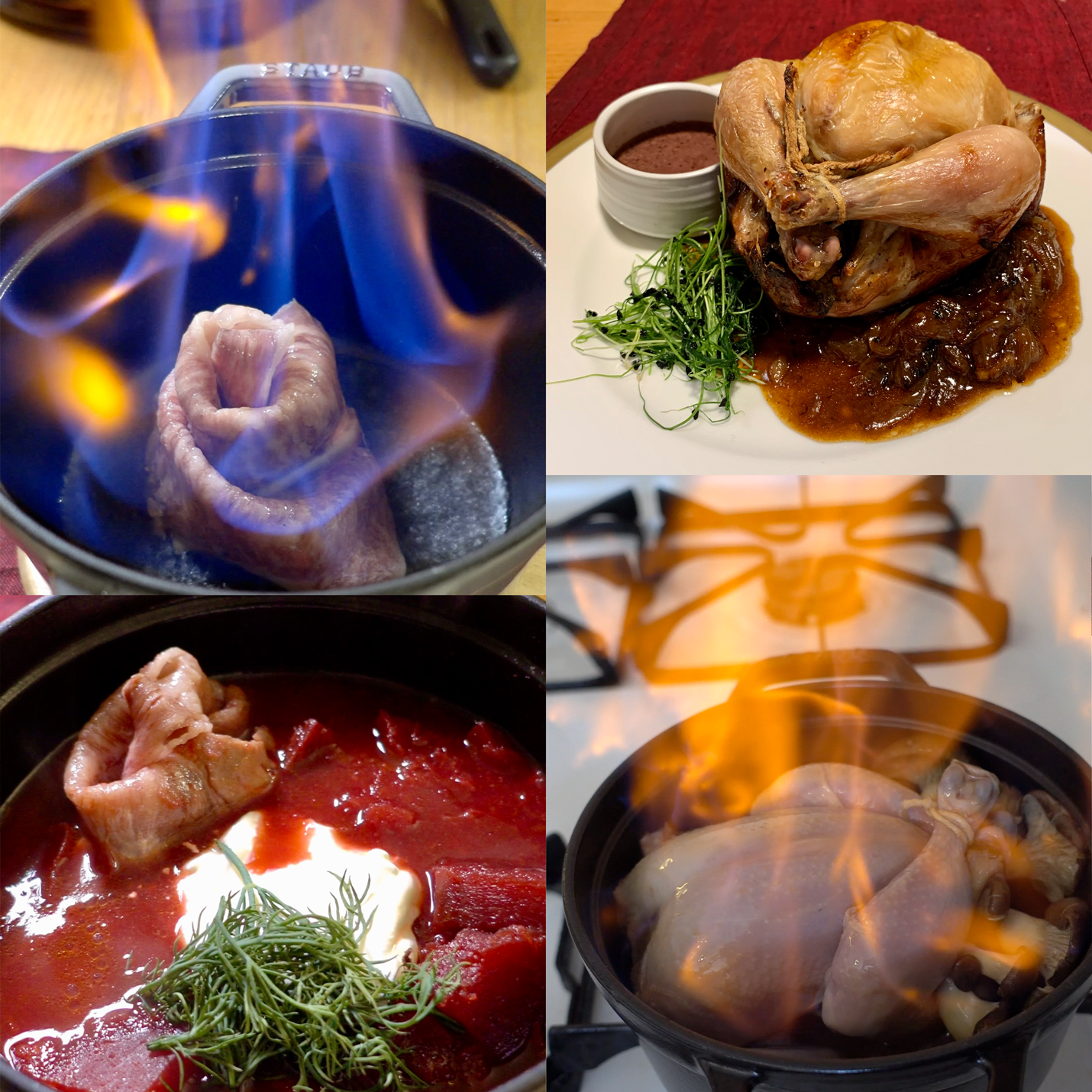 Figure 4. Flambé! Who doesn’t love a flaming twist? Anything, from hearts to omelets to even soups, can contain an element of fiery surprise. It’s not just for show – choosing the right spirit imbues the dish with a blossoming bouquet of flavors and aromas. Left: a borscht with the peaty smokiness of Islay Scotch; right: a roast poussin with notes of apple from calvados. 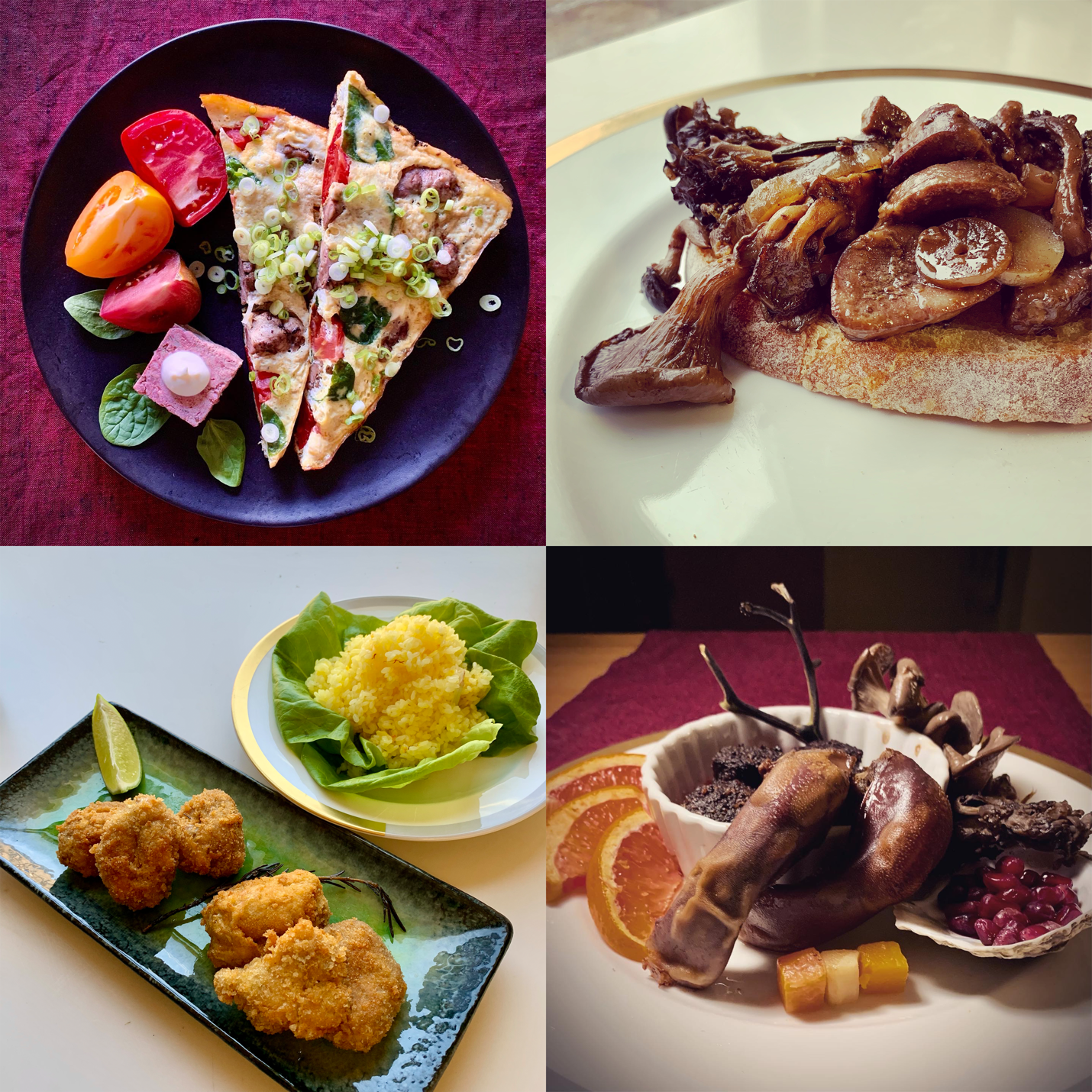 Figure 5. Assorted offal. I am fond of specialty meats, in particular offal (organ meat) – nutritious, flavorful, but often ignored in modern cuisine. My fascination with offal does not stop with the heart. Clockwise from top left: Sacromonte omelet with sweetbreads (thymus); devilled kidneys; tongue en papillote; and deep-fried brains.

Over time, I realized that my new style not only reflects my personality as a chef, but also addresses my needs as a diner. Dinner has become an incredibly calming ritual.⁠05 cj: we all have coping mechanisms, it's just that some involve delectable food Savoring a slice of whatever meat I cooked with a glass of wine isn’t just nourishment, it is reassurance that in this increasingly chaotic world, I can at least control who, or what, I am. After all, food is what we choose to incorporate into ourselves. It is the bridge between our bodies and the outside world. For me, having the luxury to choose what I eat, and prepare it myself, is a daily reminder of triumph – visceral trophies of my privilege to “eat without being eaten.”

Yet sometimes my heart still yearns for something beyond the norm, in a way that exotic meats and novel preparations cannot satisfy. In the Dantean hellscape of burning soups, mutilated organs, and controlled decay that is my new life, I dream of dinner parties and glasses clinking across the table. I dream of having my food mean something more than just an anchor of stability in my life.

It is, therefore, extremely fortunate and even redemptive, that I had the opportunity to have food – my favorite medium of expression – contribute towards a higher cause. In April, I oversaw the dining aspect of the “Night Market for Ukraine” fundraiser, jointly held by the MIT Ukrainian Folk Dance Ensemble and the UA. Managing 300-plus portions of food and drinks was certainly a humbling experience, but to me it meant something beyond that. It was a much-needed reminder that beyond the dog-eat-dog rat race, cooking can still be an act of love. 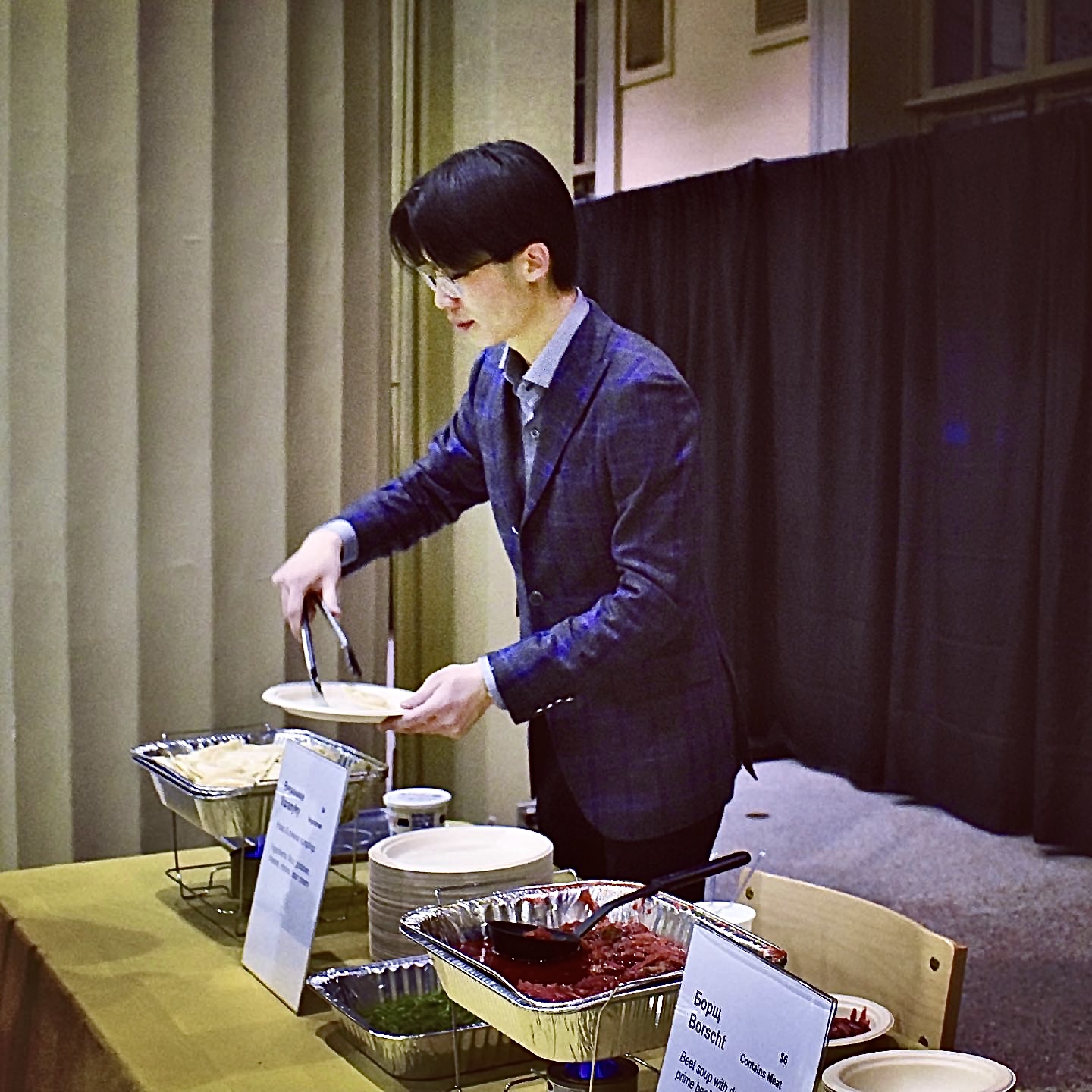 Figure 6. Serving food at the Night Market for Ukraine. Thank you, MIT Ukrainian Folk Dance, UA, and Ukrainians at MIT for the opportunity to help! At the time of this writing, the war in Ukraine is still ongoing. Here’s an op-ed I wrote for The Tech on why we should care. Here’s a link to MIT-specific resources on how we can help.

For more updates about my culinary journey, follow my Instagram @thefrenchdormitory – I recently started posting videos of my cooking in addition to photos, which really showcases the flambé element well. Finally, as is customary, attached below is a recipe for your enjoyment. This year, try борщ (borscht), a beet-colored soup that is a classic of Ukrainian cuisine. Each family has their own unique recipe, and here’s mine – try modifying it and making your own unique version! Feel free to share your creations with me, I’d love to hear about your takes on this dish and others!

Appendix I. A recipe for borscht

There are a few places where I’ve added my personal touch to this recipe.

Borscht Step I – adding the vegetables