I sneak around taking pictures and videos at night.

If I were to show you the following series of pictures, how would you relate them? 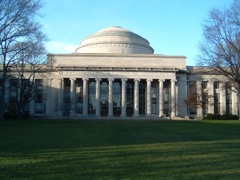 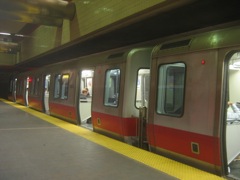 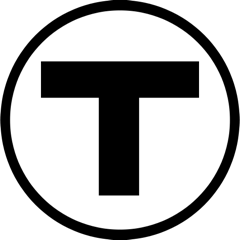 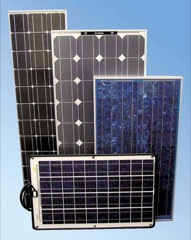 Some of my favorite guesses?
“MIT is obviously installing solar panels on the dome in order to conserve energy while the T wastes in one day what MIT works an entire year to save.”

“Somebody derailed the T and smashed it into the dome in order to destroy its newly installed solar panels.”

“Ninjas at MIT used solar panels to attack the maddened drivers of the T and prevailed in the name of energy! Then they disappeared.”

“The ninjas hacked the T, this time using solar panels they stole from the dome.”

BUT it is not any of these things. No, MIT hasn’t installed solar panels. No, the T didn’t smash into the dome. No, we don’t (always) have ninjas wandering around. Instead, it’s something better. You see, for the first time since 2006, there is FINALLY a hack on the Great Dome! Well kind of, but an awesome kind of. . . because instead of actually being “on” the Great Dome, there’s a hack mounted to the trench wall around the dome. What is it? Well what do you think all those pictures were for, you silly goose.

Affixed near the Great Dome is a near-exact replica of the MBTA Red Line. 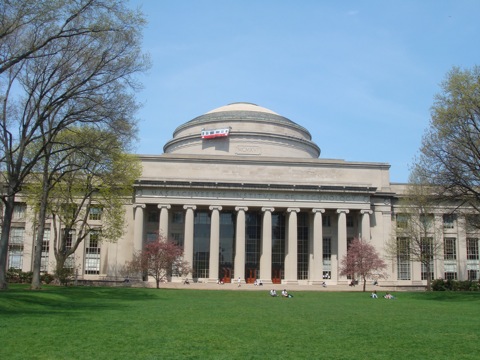 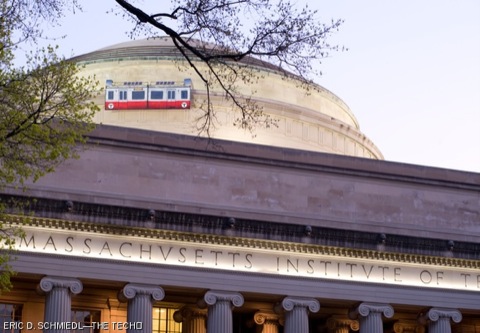 This marks a pretty important moment for me. Ever since I got to MIT I’ve wanted to see a Great Dome hack, but one has never happened. Now, finally, proof that hackers still love the dome.

I couldn’t help, though, feeling like there was something more. With the first dome hack in three years, why would it just be a banner? Also, all the captions to all the pictures of it showing up online and in The Tech claim that it is solar powered. A solar powered banner? No, there must be something more.

This is when it gets good, and why I’m glad I’m a blogger. As a blogger I’ve been contacted several times by hackers to publicize hacks. Usually it’s just an e-mail with some pictures from an anonymous gmail account, sometimes it’ll just be a time and a place, but yesterday I got an e-mail that was significantly cooler than either of those. My e-mail yesterday, from one “Charlie Card” of [email protected], shined light on a few details for me. Apparently, in an ideal world, the T hack was supposed to be driving around the dome. A special framework and motor design system were implemented to run off solar power and, controlled via remote, drive the train around in circles. Unfortunately, something went wrong, and yesterday the train was stationary. BUT, the e-mail claimed, an attempt at fixing the train was going to be made that evening at a certain time and I was invited to film the repair and the train moving.

Yesterday I took tons of naps and drank tons of energy drinks so that by the ridiculously late hour I was supposed to show up, I would be awake. I was, and I showed up in Killian in the pitch dark. I set up my tripod, got my camera all set, and waited. Sure enough, the T started moving! Now, what kind of a person would I be if I didn’t post a video of that here?

See! It moves! This made everything make much more sense! So, Boston Globe, and all of your economic-woes nonsense. It’s not a banner, it’s a moving train. A solar powered moving train. But, jumping on a story before it’s ready to be told, I guess that’s just a sign of the times, right ; )

But wait, the safari isn’t over! Another magic e-mail appeared today. The hacker with the means to control the train remotely was scheduled to start playing with the train at 2PM today. Interested in a video of the T moving during the day, and interested in telling a story a bit more informed and less snarky than the Boston Globe’s, they asked me to film it again and write this entry. Who am I to turn that opportunity down?

Apparently word got out, so there was a huge group of students, administrators, photographers, and random passersby all watching it. Let’s just say that during the day it was even more epic!

Whatever doubts were raised about hacking after the little bomb incident have been totally dissolved after this. Well, in my opinion.

So there you go, a great dome hack. Solar power. The T. And all of it wrapped up together into one, happy, hacky, and green package.