copy/paste irl, afk and everything

Like Anna H. ‘14 blogged a while ago, as my time has gotten more precious I’ve stripped away hobbies and for-fun activities and learned what I can and cannot leave behind. I’ve realized over the past year that some of the things that seem the most puntable are the things that make me me, have always made me me. One of my New Year’s resolutions has been to reconnect with the good parts of the person I was before MIT and reestablish some continuity of self—to read, to go for walks, to look people in the eye and put down electronics when we talk, to go to bed and get up at the same time and have breakfast every day. Some things are still missing—skiing and then пельмени for dinner, forests and rivers and mountains, stars and quiet nights—but I’m trying to build what I can build from a distance.

Here’s one of the stories my parents tell about the person I was as a child. We had just moved to the United States. I had just learned English, and I had absorbed the consumerist ideal of an American Christmas in my American preschool (in the Soviet Union, Christmas was absolved of parties and presents and replaced with New Year’s). I was indignant at the lack of a consumerist Christmas in my newly American family’s home, so I directed my parents through what I had learned to be the appropriate motions: the purchase of the tree and the presents, the wrapping of the presents, the inviting of all my Russian friends and their confused Russian parents. I’m very attached to some material traditions, like lights and wrapped presents at Christmas and New Year’s and Old Russian Christmas and Old Russian New Year’s, candles on Hanukkah, candy and costumes on Halloween, and cards on Valentine’s. It’s not that traditions disappear in college, but they’re up to you and the people around you to keep them going, which is hard when you’re focused on keeping yourself going.

Valentine’s Day was awesome. Boston has been snowing sideways and up. Over the past week the view from my room has looked like this: 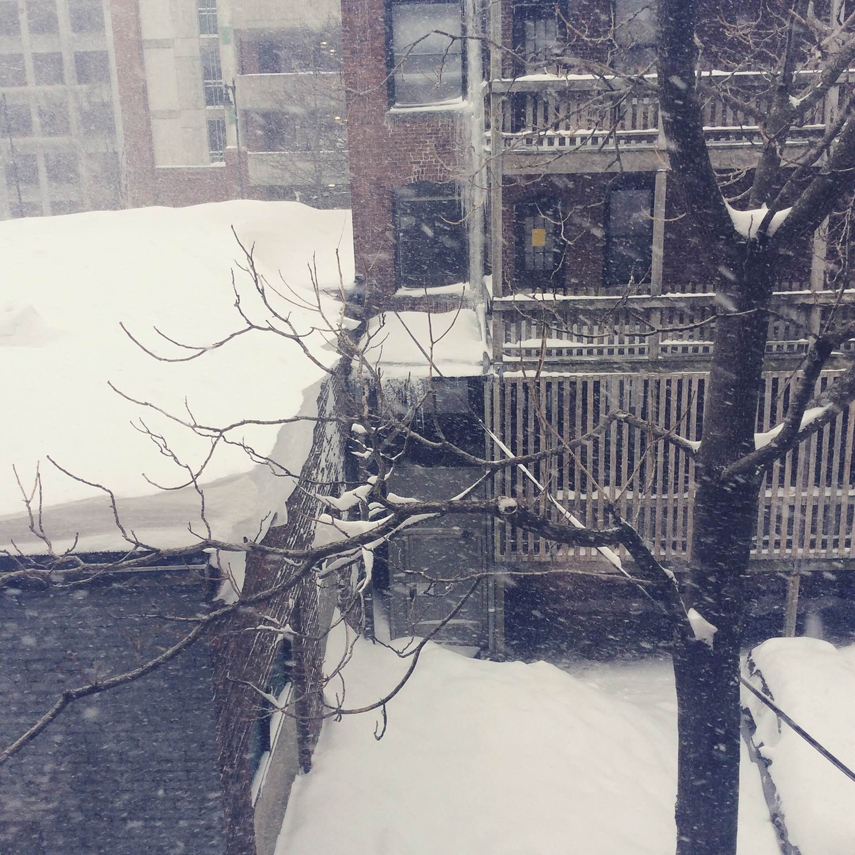 And here’s Killian, on campus (the snow is entire-leg deep on some parts of the lawn): 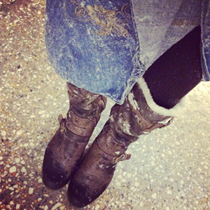 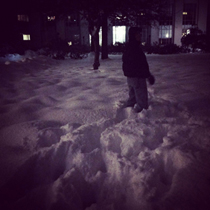 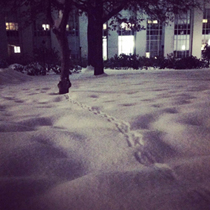 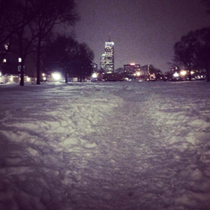 Another one of our (mine with Cory’s support) New Year’s resolutions has been to eat healthier food that costs less money, with a weekly exception on Sundays to blunt the approaching week. For Valentine’s Day we moved our cheat day to Saturday and had clam chowder (which is apparently a very Boston food) and Lady Grey tea and maple walnut muffins. 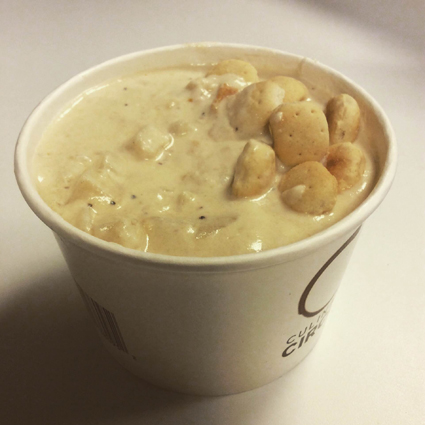 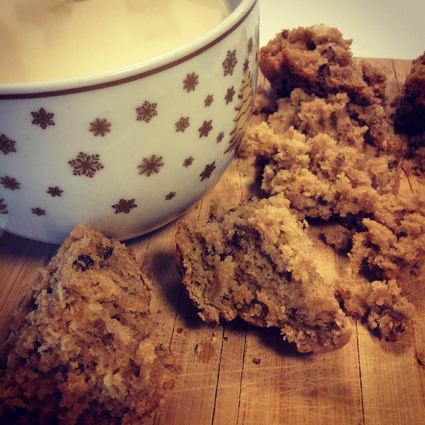 I wanted to give my friends Valentine’s Day cards, but the ones we used to give out in elementary school are apparently (now that it’s my money) really expensive, especially since my class isn’t sized 30 people like it used to be and apparently scratch and sniff is trendy. A few evenings ago I drew a card, digitized it, and printed it out in bulk. Then I cut out heart stickers and glued them on so they could be reused, because that’s the kind of thing I would have liked as a kid. Some reflections:

I had a wonderful day copy/pasting in the physical world. Hopefully next up is a charcoal sketching kit and book my mom gave me for Christmas (which a young girl who seemed about the age of my inner self complimented me on at the airport, so I know it’s awesome).

Cory and I delivered the on-campus ones just after dark, which because of the snow was still light, large snowflakes floating down around us, snow several feet deep, with piles of it taller than us on the edges of the sidewalk, squirrel tracks on the surface of the snow, bunnies probably thinking they’re camouflaged in the skeletons of the bushes, snow mobiles circling like predators. It was the most lovely walk.

Here’s the card I mailed home to Pennsylvania, and the other 120-something in the whole group: 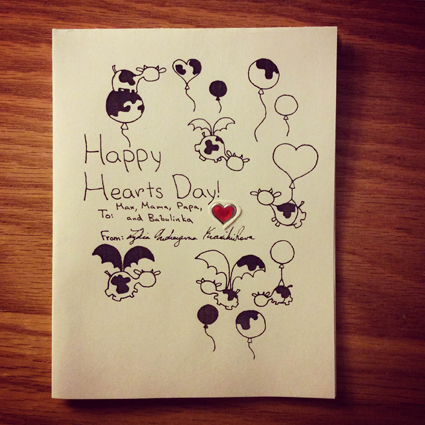 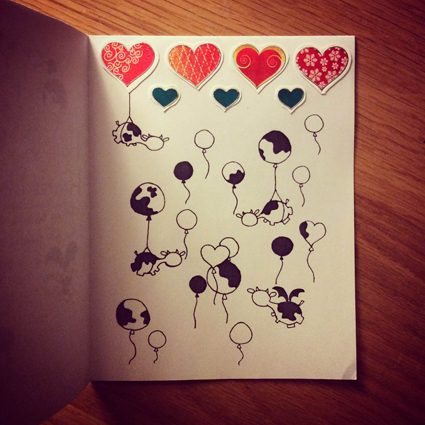 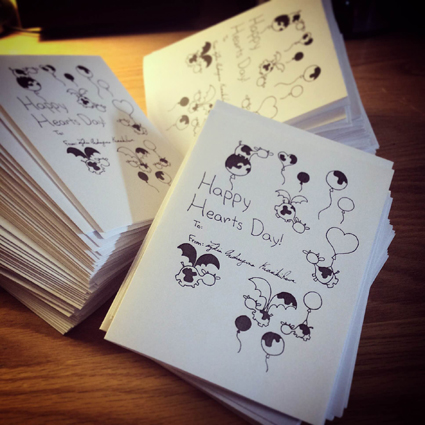 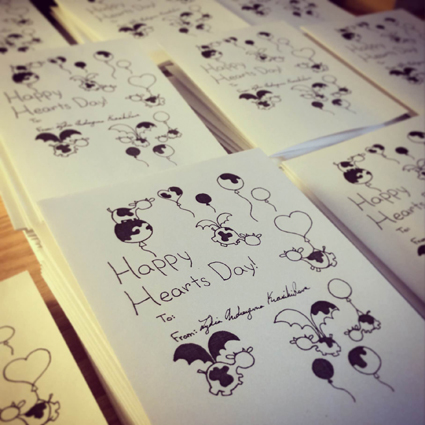 Since Valentine’s Day was on a Saturday you could plausibly still celebrate it today (or even Tuesday, if you don’t have school today). My little brother, who is small but not very small, reports that he only heard the phrase Valentine’s Day twice in school on Friday, that both times were during homeroom announcements, and that there weren’t cards or candy, which is suboptimal. If you want to use my cows to wish some of your friends a happy belated Hearts Day this week, especially if you’re a grownup or otherwise not in elementary school, you can download them as a pdf here (or make your own if you have time). Print them out. Fold hamburger, then perpendicular to hamburger. Cut out and glue a heart sticker as a balloon for the top left cow on the inside (or just draw or color a heart (or tape a wrapped candy or chocolate if you’re really awesome)). That’s all. Go spread cheer.