Harbinger of Doom, Despair, and Knowledge: PSETS by Chris M. '12

Don't worry, not as bad as they sound.

Now that you’ve decided to matriculate to MIT, you might be left wondering just what it is you’ve managed to get yourself into.

As an expert in what he is and is not currently in, I’d be happy to tell you and as I was reflecting late one night about how fast time flies by, and the impression I had of MIT vs now, I remembered with a telling laugh my first introduction to psets, and realized that I don’t think anyone’s ever talked about them. So! Here we are, and here we go!

Psets are an abbreviation for”Problem Sets”, which is the academic way of saying “homework”, and the answer to what you’ll be doing on a Thursday night. Generally speaking, there aren’t many questions on a pset, but you shouldn’t think that a lack of questions implies it won’t take long to finish. That’s what happened my freshman year.

It was my first pset for 18.01 (Calculus 1), a class that I wasn’t having trouble with since I’d done really well in BC calc, but decided to take anyway. I picked up my pset and glanced through it quickly, counting problems to estimate how much time it would take.

This went on for a while.

Eventually I came to grips with the apparent knowledge that my homework, which I had a WEEK to do, only had 5 problems. This was going to be a piece of cake.

So I did what any reasonably intelligent person who feels they have way more time to finish a task then they need does, and I procrastinated. I procrastinated a lot. In fact, it wasn’t until the night before it was due, around 6p that I decided “hey maybe I should really knock out that pset”. So I emailed some of the new friends I was making and asked if they were working on the pset. They said yup, they were working over in Burton Conner, so I went over to join them.

When I got there, they said they were on problem 4. Silently, I reassured myself and part of me even scoffed at the transient notion that this would take any significant time at all. “They’re already on number 4 out of 5” I said to myself. “I’ll be out of here in an hour.”

As my mental image of myself was busy receiving the Nobel Prize in Mathematics for being so right about how long the weeklong pset was going to take, my friends casually mentioned that they’d been working on the pset every night since it came out.

And they’d only finished 3 problems.

To disperse the settling and unpleasant realization that it may have in fact been my professor who knew how long the homework was going to take, and not I the freshman student, I decided to jump in and get started on problem 4, just to prove that it wasn’t that hard.

I don’t have the original pset anymore, but it was something not unlike this:

“Calm down”, I thought. “Maybe that’s just a curveball, just a tough one to get you thinking. Lets take a look at another one” 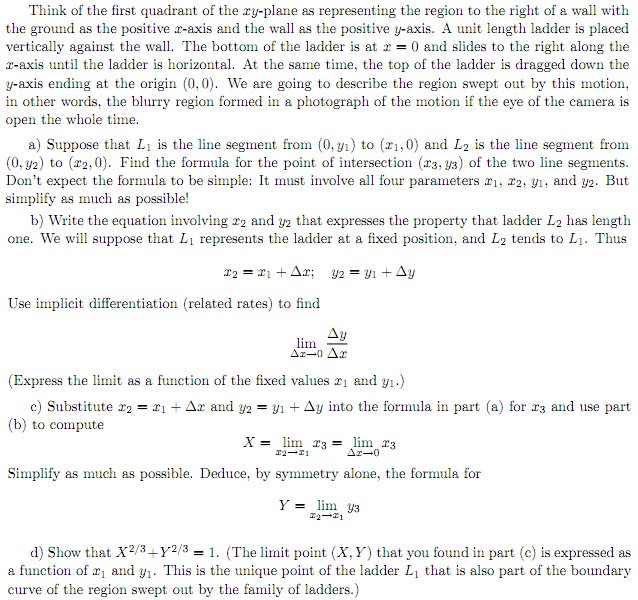 Resigned that I was going to be here a while, I settled in and got cracking. Hours flew by. Page after page of paper fell to the relentless motion of my pencil and the steady drumming of fingertips on a calculator. Most of my friends finished and went to bed around 11 or so, and one other kid, Daniel, and I trudged on through the night.

See, Daniel also needed to complete the entirety of the pset in one night, so we worked together through the night until we finished. And finish we did! At 8:30am. We were exhausted, humbled, but most intriguingly, I was fascinated. I couldn’t stop thinking about one of the problems on the pset, mulling over in my mind the moment where the gibberish on the page clicked and I understood the answer. Nothing like that had ever happened before.

To understand, we need to take a step back and look at my homework in high school. Calc consisted of homework every night, to be collected altogether at the end of the week. I’d usually ignore the “every night” part of it and fly through the problems in the 1st period before class, no problem. There were a lot of them, but they were essentially the exact same things we’d seen in class, with different numbers, or trivial extensions thereof.

And that’s really where psets here differ from homework you may be used to. They’ll really force you to have a deeper understanding of what it is you’re talking about, and if you’re the curious type, you’ll really enjoy the questions that spring up as you work through some difficult stuff. I never quite get over that initial shock of reading a problem and seeing something that seems way beyond anything I’ve ever seen before. I’ve gotten better about breaking it down and figuring out the pieces though, and that’s a really useful skill. For all the whining and complaining and caffeine sales on a Thursday night, psets do a pretty good job of teaching you the material.

Aside from learning (which, believe it or not, is not your entire existence at MIT), psets tend to be prevalent social events, especially among freshman. That guy I worked with all night on our first pset? He’s now my roommate, and he’s been so for my entire undergraduate career. In fact, now that I think about it, nearly all my closest friends I’ve met through psetting. Huh.

So to wrap it up, don’t wait until the last night to do your pset (though you probably will, nearly everyone does), and be prepared to do less but much much harder (and interesting problems).

12 responses to “Harbinger of Doom, Despair, and Knowledge: PSETS”