Pictures of the top of Hayden Christensen's head inside!

Tonight LSC hosted a pretty exciting event – a screening of a few selections from the upcoming movie “Jumper”, as well as a discussion panel including Hayden Christensen, director Doug Liman (who also directed “Mr. and Mrs. Smith” and “The Bourne Identity” trilogy), and MIT physics professors Edward Farhi and Max Tegmark. It’s not every day that we get former Darth Vaders up on the stage at 26-100, so there was a pretty sizable crowd lining up all the way out to the building 56 Athena cluster, including local press and MIT alums. 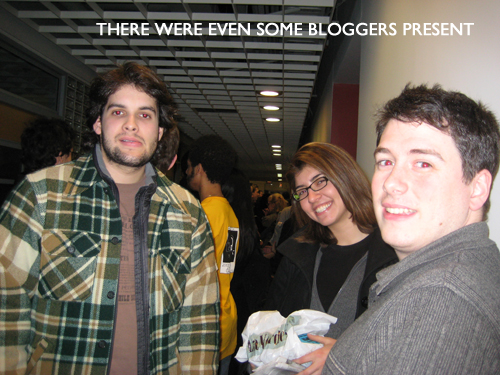 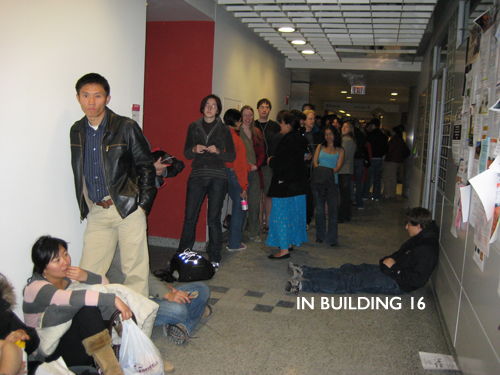 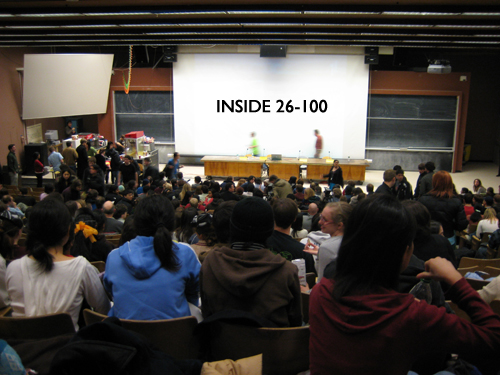 And so, because it’d be faster and more interesting and also because I don’t remember exactly what was said, I give you HAYDEN CHRISTENSEN AT MIT IN 15 MINUTES! (and pictures.)

LSC GUY: Hello, and on behalf of LSC, thank you for coming to this free screening of Jumper! Speaking of Jumper, I’m wearing a blue sweater. And now, here to talk about his movie, Doug Liman.

DOUG LIMAN: Hello, my name is Doug Liman and this is my movie. These clips are from a week ago, which is like a year in Hollywood time, so it’s like going back in time for me. And also, I didn’t get to pick them – Fox did. Okay, here we go.

CLIP 1: (DAVEY, the movie’s main character, discovers he can teleport. Joke about a library.)

DL: And this clip is why I fell in love with the movie.

DL: And this clip is where we see Hayden.

CLIP 3: (HAYDEN gets beaten to a pulp by SAMUEL L. JACKSON)

DL: And this is the clip where we see another one of the jumpers, who is played by Jamie Bell.

HALF OF THE AUDIENCE: Hey, wasn’t he Billy Elliott?

OTHER HALF OF AUDIENCE: Ohhh yeah.

DL: Some of you thought you were going to come see the whole movie tonight, but we actually just finished it last night, so uh, sorry, that’s pretty much it. I have no idea how that rumor got out. Uh, now the guy you probably actually came to see.

AUDIENCE: WOO!!! (more cheering and applause than for HAYDEN CHRISTENSEN)

AUDIENCE: WOO!!! (more cheering and applause than for HAYDEN CHRISTENSEN)

EDWARD FARHI: Hey, this is like teaching 8.01 all over again.

EF: Wow, major Debbie Downer. Anyway, I’m going to talk about quantum teleportation. But in order to do that, I have to teach you quantum mechanics. It’ll just take a minute. 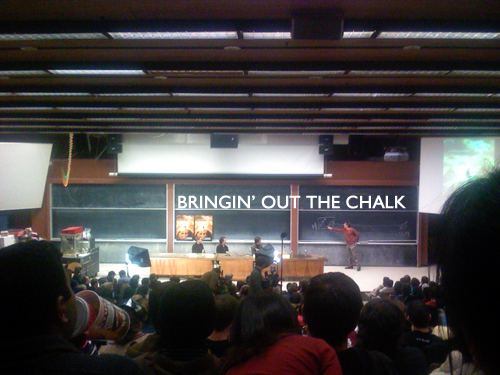 EF: So you take an entangled pair of electrons, put each one at point A and point B, and put the electron you want to teleport at point A. Then you take a “measurement function” which collapses the wave function of the electrons, which will give you any number 1-4. You pass that information through conventional methods, like radio or light, to point B, and “you do some quantum thingy” (his words) depending on the quantum number to the electron at point B, which will result in the electron having transported over there. So.. basically to do this with Hayden, from Earth to Mars, you’d have to destroy him on Earth. (This explanation brought to you with major help from The Angela Monster.)

MAX TEGMARK: So now I’m going to talk a little more about classical teleportation – which isn’t necessarily teleportation, per se, but is more like transporting someone from point A to B very quickly. But I’m going to do it with a power point that isn’t always grammatically correct, and features a lot of pictures of Hayden Christensen in various poses. 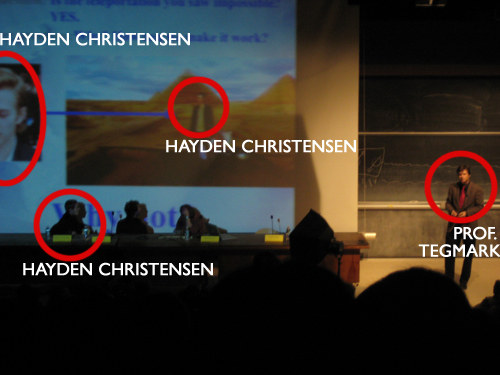 MT: You would never be able to do what Eddy said, because there would be a LOT of energy required. So, say you wanted to classically teleport someone from here to another solar system. The problem with doing it that way is that once you get there, someone would’ve built a better and faster approach to do it. So you’d get there and it’d be like, uhh, who’s that guy? 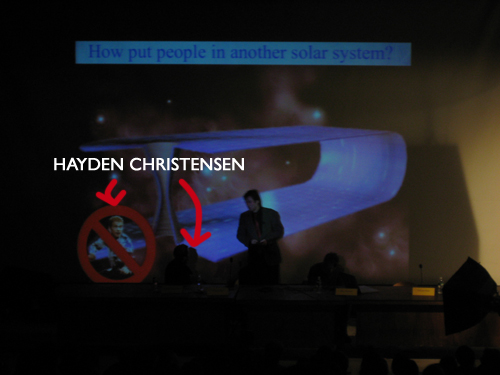 LSC GUY: Let’s open up the panel to questions!

MALE MIT STUDENT: This question is for Doug Liman. How much effort do you put in trying to stay true to real-world science?

DL: I do a lot of research for my movies. Like I talked to a real world assassin when I was doing the Bourne movies. I try to still think of the science of my movies, you know, like, if Hayden’s sitting over here, and you teleport him, the air should like collapse in, so much so that there might be condensation created..

EF: Actually, I have a question for you guys (Liman and Hayden Christensen). What do you think we, as scientists, can do for Hollywood?

HC: Go see Jumper. And then, you know, get on it. Make it happen.

MALE MIT STUDENT 2: This question’s for Hayden – I was just wondering what you were expecting when you agreed to come talk to us at MIT tonight..

MALE MIT STUDENT 2: Like, were you expecting just normal kids, or did you think we’d be like (nerd voice) “huhhh, flux capacitors”?

HC: Uhh.. I guess I wasn’t expecting you guys to be such a lively group.. but ah, no.. this is cool.

OTHER MIT STUDENTS: Other various physics and/or film related questions!

FEMALE MIT STUDENT: This question is for Hayden. My best friend is recently single; would you ever consider dating an MIT girl?

LSC GUY: And that’s it for tonight! Make sure to come to our other LSC events coming up, like Hotel Rwanda this weekend co-hosted by MIT’s STAND..

STEPH SHIM: I LOVE YOU HAYDEN!!! 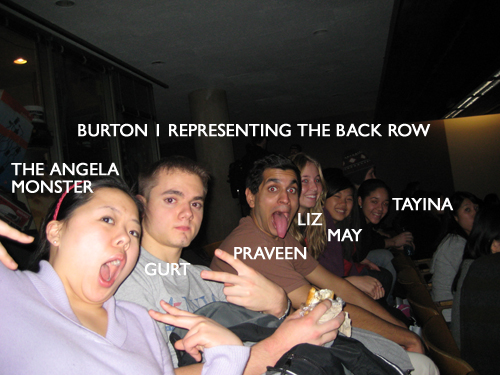 And that’s pretty much how it went. I didn’t get to talk to, touch, or even really see Hayden because I was in the back row, but here is a pretty good picture of the top of Hayden Christensen’s head that I rushed the stage for just for this blog entry. 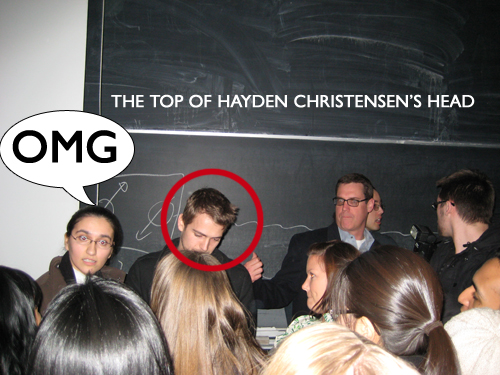 Tomorrow, it’s back to Matlabbing and UROPing, but tonight, JUST FOR TONIGHT, I got to photograph the top of Hayden Christensen’s head. And also, learn the mechanics behind quantum teleportation. Not bad for a Wednesday night!