Life's not always a picnic in Killian Court.

Monday was a student holiday, which means that while my friends at their respective universities slaved away we at MIT got up late, ate ridiculous amounts of food for a few hours (I woke up to my friends making a breakfast feast – Kel made British pancakes, Sadie made vegan pancakes, Amy made banana pancakes, Hannah made scrambled eggs with tomatoes, and I joined in and made my earth-shattering waffles), and then went back to sleep. Oh, and we worked on problem sets (after which we ate more food). While I was doing problem sets with some friends at Senior Haus, Gheorghe ’07 came rushing in with a bowl of salad.

Far be it for me to let work stand in the way of food. And seeing as I had been sleeping, as previously mentioned, a few hours before, I rushed out there in my sweats.

Fascinating fact that I forgot upon rushing outside in my sweats: Gheorghe happens to be an amazing photographer. Unluckily for me, I was wearing sweats. Unluckily also for me, Gheorghe has friends in The Tech (the UNIVERSITY-wide newspaper) who decided that his picture was important enough to take up a quarter of the page, and to be printed in full color. 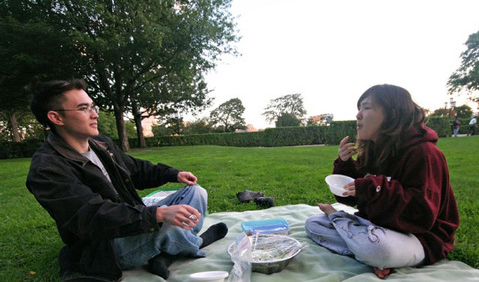 Also unluckily for me, everyone seemed to be holding a copy of The Tech on Tuesday morning.

I don’t even know what to say to that, really. I don’t look like I’m taking advantage of the long weekend; I look like I’m getting sick from that deviled egg (or maybe from the poor grammar in the caption?) And Ben knows it. Look at him, recoiling in horror at my long, long face.

(In reality, the food was delicious.)

On an entirely different note, I got a call from one of my distressed senior friends last night. I know it’s very easy for me to say this having already gone through it, and there’s no way I could make this horrible process better, but I really do know how you’re feeling right now. Senior year is hard. I know that to be a fact, because I’m pretty much still a high school senior (plus one year, but how do you measure, measure a year?*). The beginning of my senior year was brutal, because I was trying to retake my SATs, write a million college essays, and apply for a million scholarships all at once. Dealing with the fact that you won’t see your friends for a while after this one year is rough enough. But I got through it okay, and you will too.

Because here’s the thing you shouldn’t forget – you will get into college. And it may or may not be your dream school, but at the end of the day you will be in college, where you’ll have the opportunity to really make something of yourself. And you’ll go there, and you’ll always run into that one guy in the co-ed bathroom who will eventually think all you do is shower and walk around in a towel, but you’ll meet amazing people who will think you’re amazing, and take classes in subjects that fascinate you, and never think about the SATs again. Isn’t that a nice thought? You’re almost there. Go for it.

* One of my friends once converted Seasons of Love into seconds. And sang it that way. He’s now another MIT ’10. He lives down the hall from me.