Or, how I fail at eating hot dogs.

I’ve always been a big eater. Part of this may be because my dad is not only a fire fighter but also because he used to be a cook. For those of you who are out of the loop, fire fighters cook enough food for an army, and when they’re on shift that’s fine. When a fire fighter cooks for an army but only has to feed a family, the boy has to eat it all. That’d be me, I’m the boy, and I’m used to eating massive amounts of food.

Before Matt, Ben, and I gave our presentation last week we went for lunch at a place called Spike’s Junkyard Dogs. While there I noticed a contest that challenged patrons to eat as many hot dogs as possible. Being the typical MIT student with a huge ego I say to Matt and Ben “Psh, I can do that, look! The record is only 14, and you get an hour and a half to do it, how is that even hard!?”

Matt and Ben were skeptic. I was not.

The e-mail went out Saturday:

So Spike’s Junkyard Dogs (http://www.spikesjunkyarddogs.com/index.html) has this neat little contest wherein whoever can eat the most hot dogs in 1.5 hours gets their picture on the wall, a t-shirt, free hot dogs, and all sorts of other fame and admiration. The current record is only 14 dogs. As some of you may know, I’m pretty much a garbage disposal for food, so I thought I’d give it a try.

I’m planning on heading over tomorrow at about 3 pm and I’d appreciate a cheering section. I can’t make any guarantees as to whether I’ll be able to eat 15 dogs or not, but I’ll certainly end up making myself sick and eat a ridiculous amount of food.

Anybody interested, let’s meet in the 23 at 3ish. You’re welcome to try to break the record with me!

I planned my dinner and breakfast food amounts accordingly and went for a jog in order to make myself hungry. A group of us headed out at 3 and laughed joyously at the thought of what was to come. 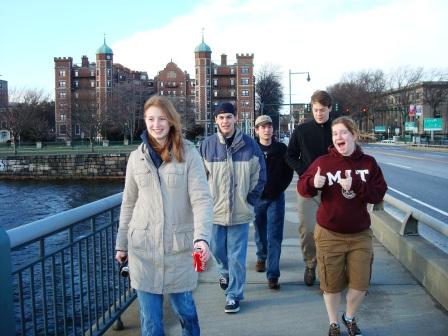 We got there and I strode up to the counter, slapped down a $50 bill and said “I’m going to eat 15 hot dogs.” The cashier took the money and said “Do you know the rules? As many hot dogs as possible, an hour and a half, no bathroom and no throwing up.” I nodded and was ready to eat. We all sat down at the table and chatted happily, waiting for our hot dogs to arrive. Zach LaBry ’08 decided to try and eat as many as possible as well, so it became a nice little contest between the two of us. Here’s our group before our food had arrived, Zach is the one in the middle. 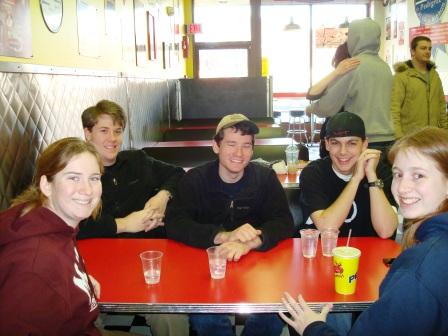 The hot dogs began to arrive. Michelle ’11 got hers first 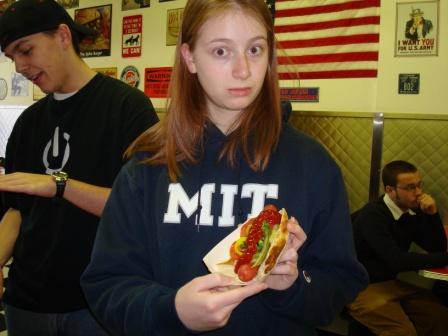 followed by Zach Bailey ’08 (we had more than one Zach in our party, so Zach Bailey actually told the guy at the register his name was Jim). 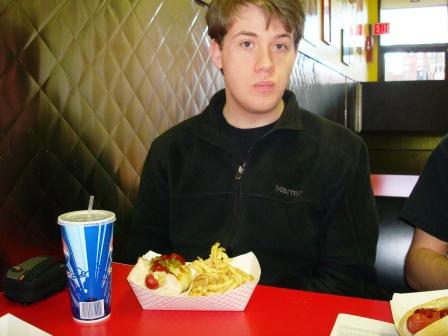 and then Zach LaBry 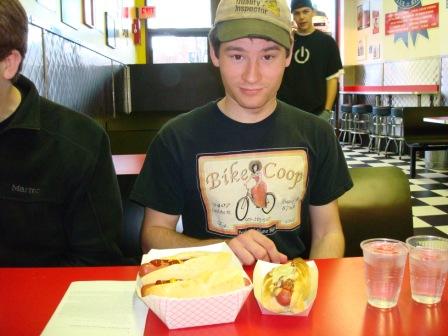 Jordan got hers next 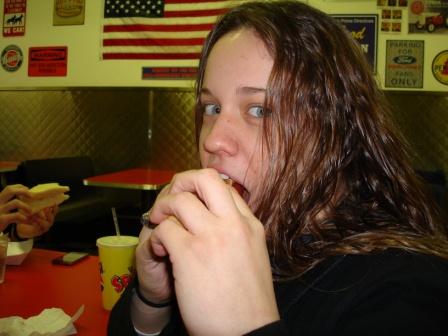 and then I started to get mine. 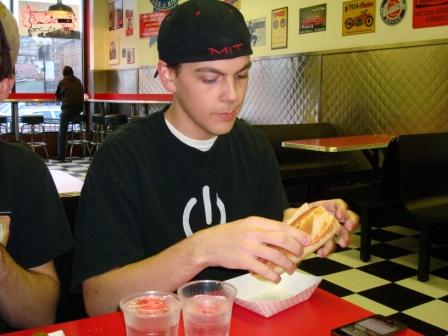 I scarfed the first two dogs like they were nothing. By the third one I wasn’t really hungry anymore. I could still eat, it just wasn’t pleasant. Why such an early sign of defeat? The buns on the hot dogs were actually baguettes. Seriously, they took a loaf of bread, cut it in half, and made it a hot dog bun. It dries out your mouth so much! Being the engineer I am, I decided to try and find an easier way to consume bread. Perhaps if I dunk it in water!? 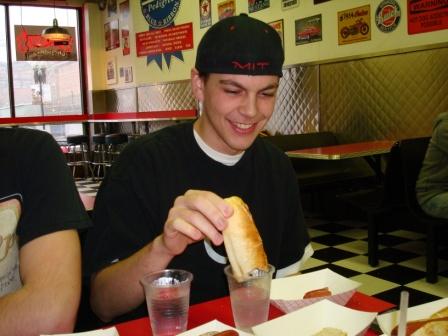 Let’s see, now that it’s all moist I’ll just take a bite and then 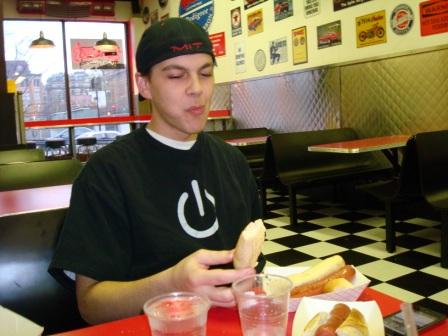 BLECH! Ok, dunking in water maybe wasn’t the best idea. At all. Bread turns into this nasty, aloe-like gel-consistency when soaked in water. It’s not appetizing. Good thing they gave me a bucket. 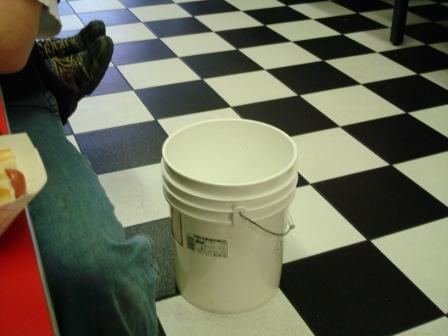 As I begin fighting my way through my fourth hot dog Zach is on number 5. It is at this point we realize that Zach is a beast and I suck at eating hot dogs. This is what our table looked like about midway through the eating: 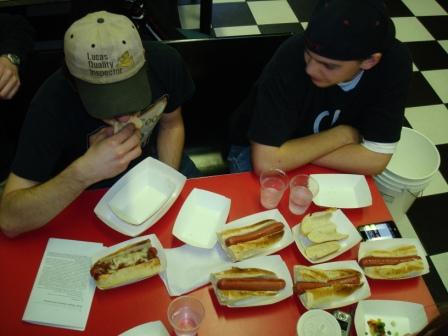 Notice how I stare at Zach in awe as he scarfs down dog number 7. I am just beginning number 5.

Zach’s having a great time, I’m angry at meat. 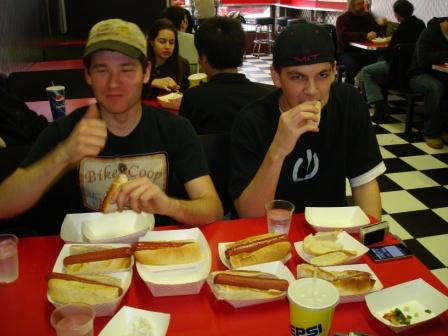 This is me halfway through dog 5. 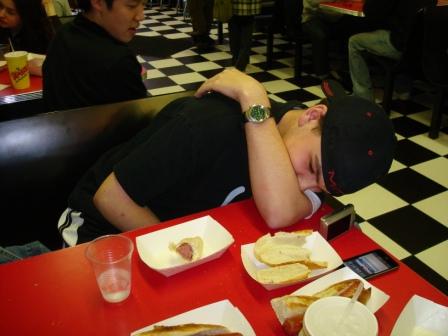 After an hour and a half I had eaten 5 dogs and Zach had eaten 9. I realized that although I may like to eat a lot of food, my metabolism doesn’t, and baguettes suck. Zach, for eating more than 6 hot dogs, got his picture on the wall and a t-shirt. 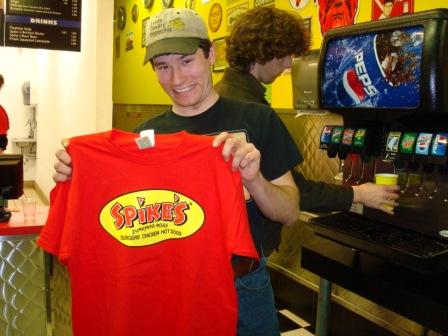 I got nothing :( That’s ok though, because I had a really fun time, am uber impressed by Zach, and I got to eat a lot of tasty hot dogs. Michelle stole one though. 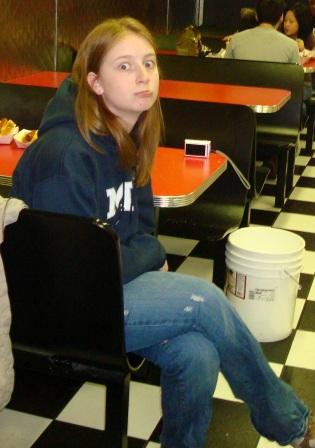 Before we left, full and content, I gave my hot dogs one last stare down and then threw them away. It’s just too much hot dog for one person. So, a challenge to all you pre-frosh during CPW, let’s get together and go to Spike’s, I want to see you all eat over 6 hot dogs. I’ll try to get funding, but bring some money along in case I can’t. It’s about $2.50 a dog, it’s a good time!